Some people read Action Comics and dream of being Superman, high-flying hero of millions. Me, I want to be ageing newsman Perry White. This week, anyway, as he finally meets the new owner of the Daily Planet.

An actual increase in the editorial budget? That never happens in this age of abandoned print editions and ‘digital transformation’. Perry is so thrilled he ignores the fact that the offer is too good to be true. Reporters Clark Kent and Lois Lane, though, are a little more clear-headed after they’re offered hefty wage rises.

Perry will wake up to the fact that the bewitching Marisol Leone – I think this is the first time we’ve heard her forename – is no Girl Scout, but let’s allow my fellow journalist to dream awhile.

It’s an interesting day all round for Clark who, in his other identity of Superman, must rescue the scientists at STAR Labs from the Monster of the Week. 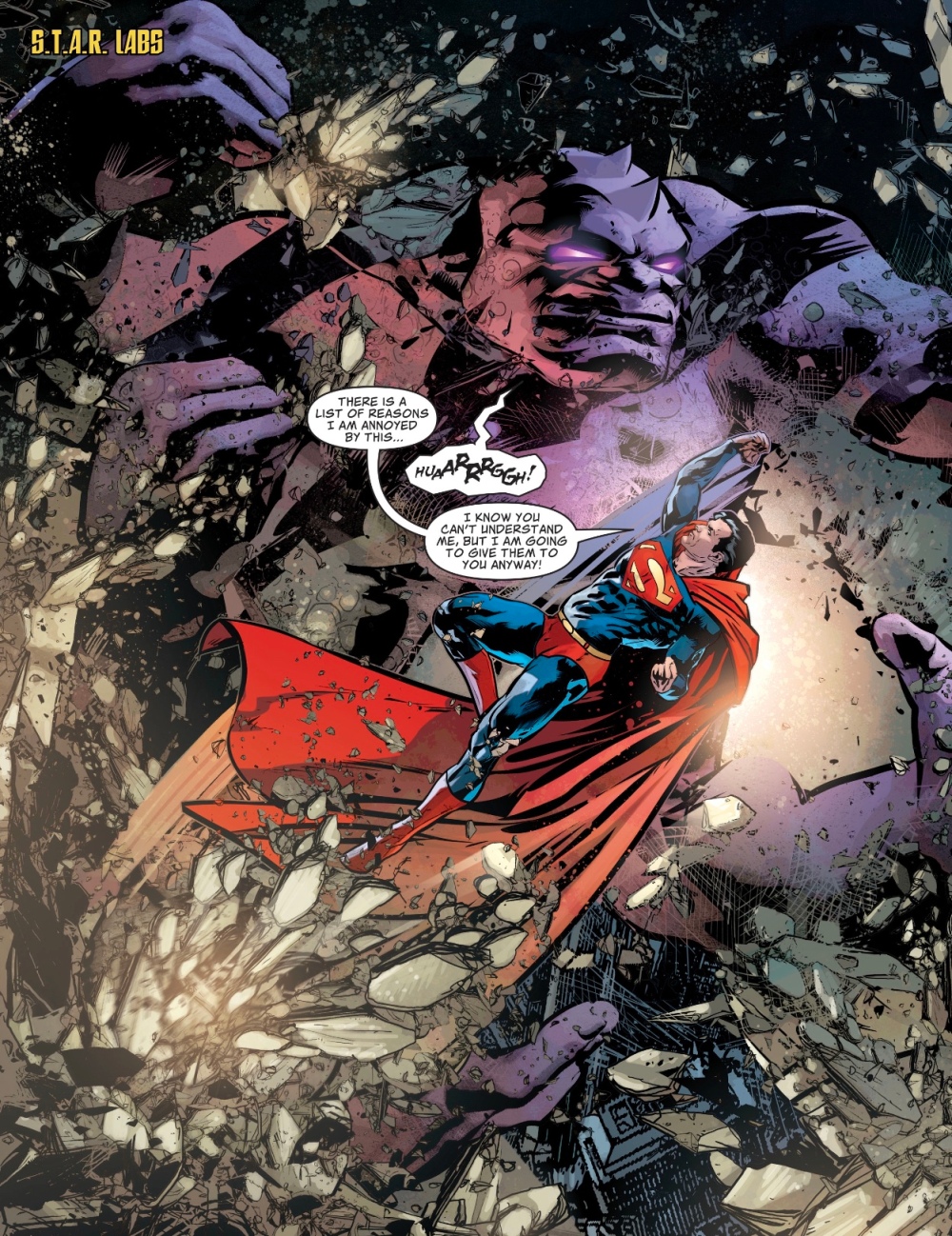 For once, though, they’re not being attacked by outside forces, this is a beast they’ve been hiding in the heart of Metropolis. And Superman isn’t happy, leading Clark Kent to expose the dodgy doings in a piece for the Planet.

Elsewhere, the Mayor’s hopes of illicit pleasure in his downtime are wrecked by a fighting-mad Thorn who, like Superman, has lately been preoccupied with uncovering the true face of Leviathan, the masked mystery person who has been taking down the world’s covert organisations – and who tried to recruit her.

This being Metropolis, there’s always someone more powerful around… 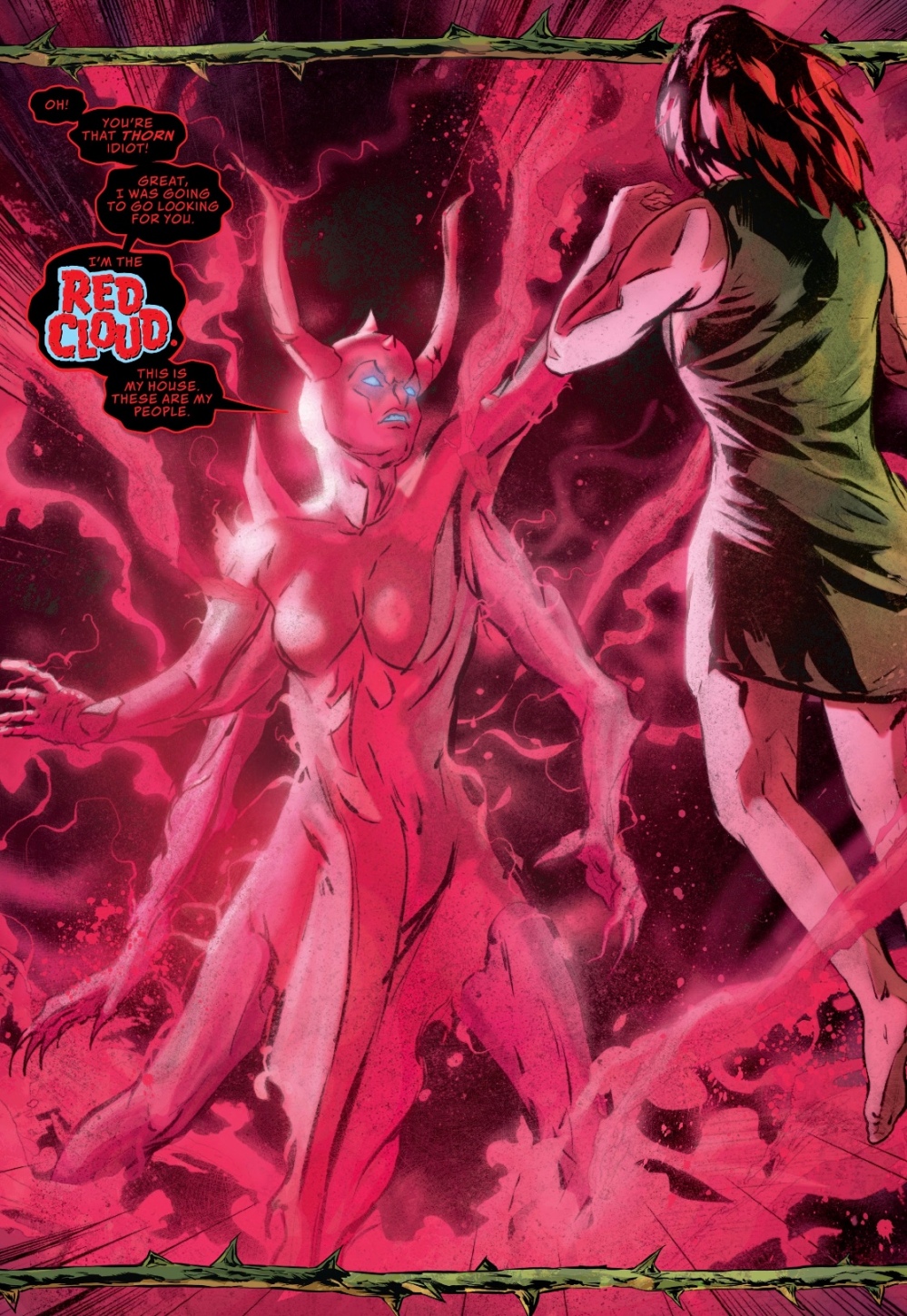 This chapter of Brian Michael Bendis’ ongoing Invisible Mafia/Leviathan storyline closes with the arrival of next month’s guest star, and it’s a nice capper on another hugely compelling issue. While the Leviathan mystery doesn’t progress much – hey, it has its own mini-series – there’s so much goodness that I feel thoroughly satisfied. Ms Leone’s desire to use the Planet to expose Leviathan is fascinating; stepping out of the shadows of her secret criminal empire, she’s exposing herself to the spotlight, a move which could see her losing everything. She’s such an interesting character that I really wish she’d do a Morgan Edge and stay with the book in a reformed capacity (OK, the original Morgan Edge didn’t actually reform, he was never truly bad, just hidden away by a Darkseid doppleganger and finally freed to annoy Superman throughout the Bronze Age). And as drawn by Szymon Kudranski and coloured by Brad Anderson, she’s utterly charismatic, ridiculously elegant and composed, like a statue newly brought to life

Perry also earns his page space, showing that he’s the heart of the Planet; knowing that even a gossipmonger like Trish Q has the journalistic chops to match anyone on staff.

One reporter who doesn’t put in an appearance is Robinson Goode, but we do meet her not-exactly-better half in the shape of Red Cloud, newly upgraded courtesy of Lex Luthor, who’s flittting about the DC Universe in hologram form with deliveries from his eeeeevil Amazon-style drones, declaring 2019 the Year of the Villain.

Seeing that Ms Leone doesn’t fool Lois and Clark for one minute – and Lois doesn’t even meet her – is a neat reminder that these are two of the best investigative hacks on the, no pun intended, planet. The scene also reminds me that Lois is supposedly writing a book about her life with Superman, a subplot I’m more than ready to see bubble to the surface. If you’re reading this review, Mr Bendis…

The synergy between writer and artist is remarkable, given Bendis and Kudranski haven’t been working together long; Kudranski understands the sophisticated urban mood Bendis has been building and amps it up on the page. There’s terrific subtlety to the ‘acting’ and when the emotions rise, the intensity is a thrill – look, for example, at the mania of the Thorn. The storytelling is first rate, with even the panel borders adding to the visual experience. Anderson knows when to go naturalistic and when to bring on the neon, emphasising the drama, while letterer Rob Leigh adds the finishing touches with his sympathetic approach to the presentation of dialogue.

The cover illo by Brandon Peterson is a grabber, and I love the melting masthead, a Year of the Villain trademark – that’s good work by the DC Production Department.

Everyone involved in this issue, from the creators I’ve namechecked to editors Jessica Chen, Mike Cotton and Brian Cunningham, should take a bow. It’s another superb chapter in the Never Ending Battle. Don’t miss it.