Yay, it’s the issue we’ve been counting up towards for months, Marvel Comics #1000!

OK, we all know that’s not true, this isn’t so much Marvel Comics #1000 as Marketing 101 – DC has had recent success with giant issues to mark Action Comics and Detective Comics having been around continuously since the Golden Age, but Marvel has no equivalent title. But the House of Ideas’ big notion here is to simply fib and chant ‘la la la’. Why they couldn’t simply have called this the ’80 Years of Marvel 80pp Giant’ I don’t know, it would likely have sold the same.

What this comic does have going for it is an idea that’s genuinely novel – every one of the 80 pages has a different creative team telling a mini-story linked to something that happened between 1939 and 2019. While the likes of ‘1939 The Human Torch debuts in Marvel Comics #1’ and ‘1962 Spider-Man debuts in Amazing Fantasy #15’ make sense, others are a tad random – ‘1985 Odin gives his life to end the Surtur saga in Thor #353’ and ‘1993 Wolverine and the Punisher: Damaging Evidence is published’. Has anyone even heard of that one? Mind, it does give us a fun page: 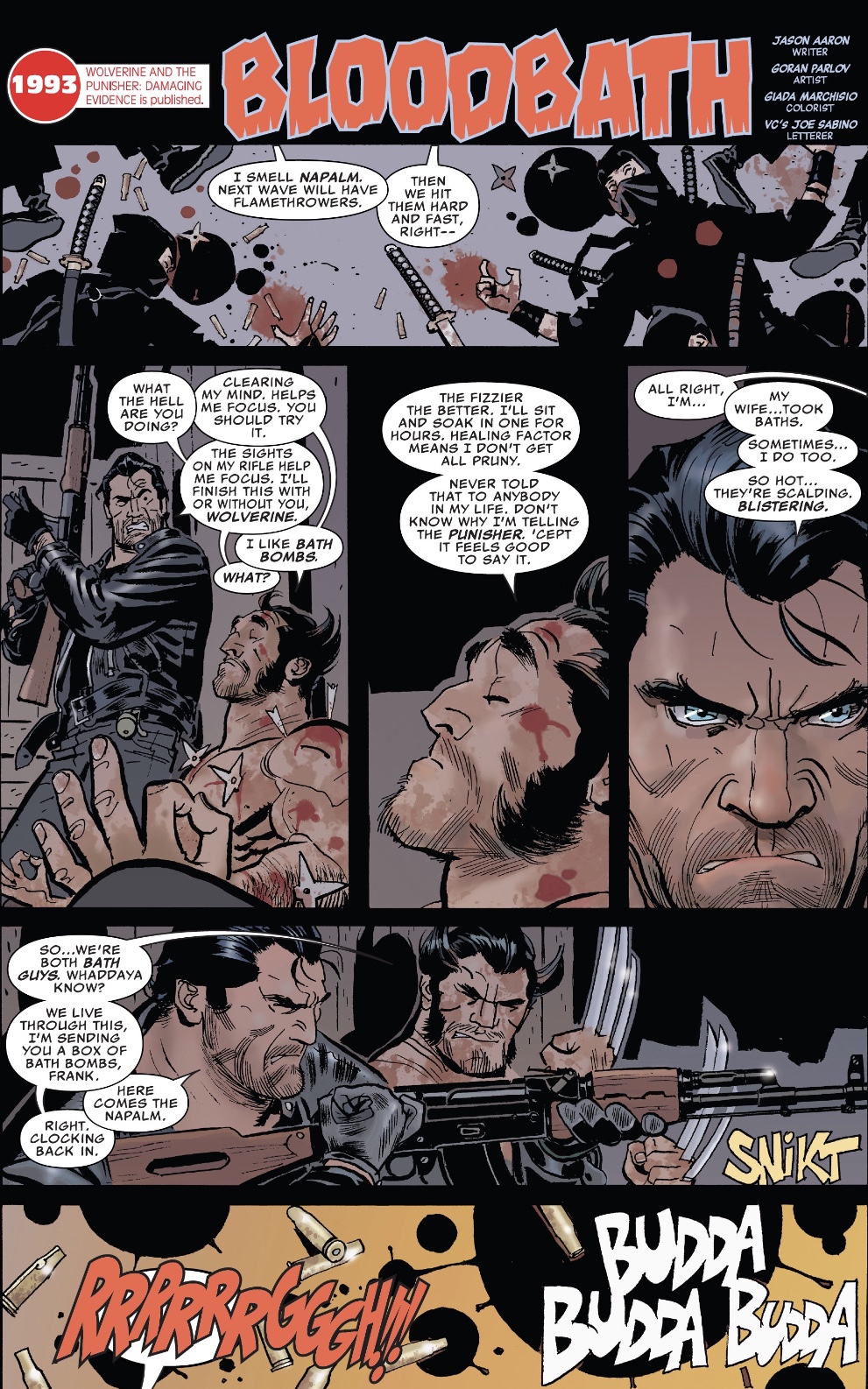 There are several other delightful strips in here. 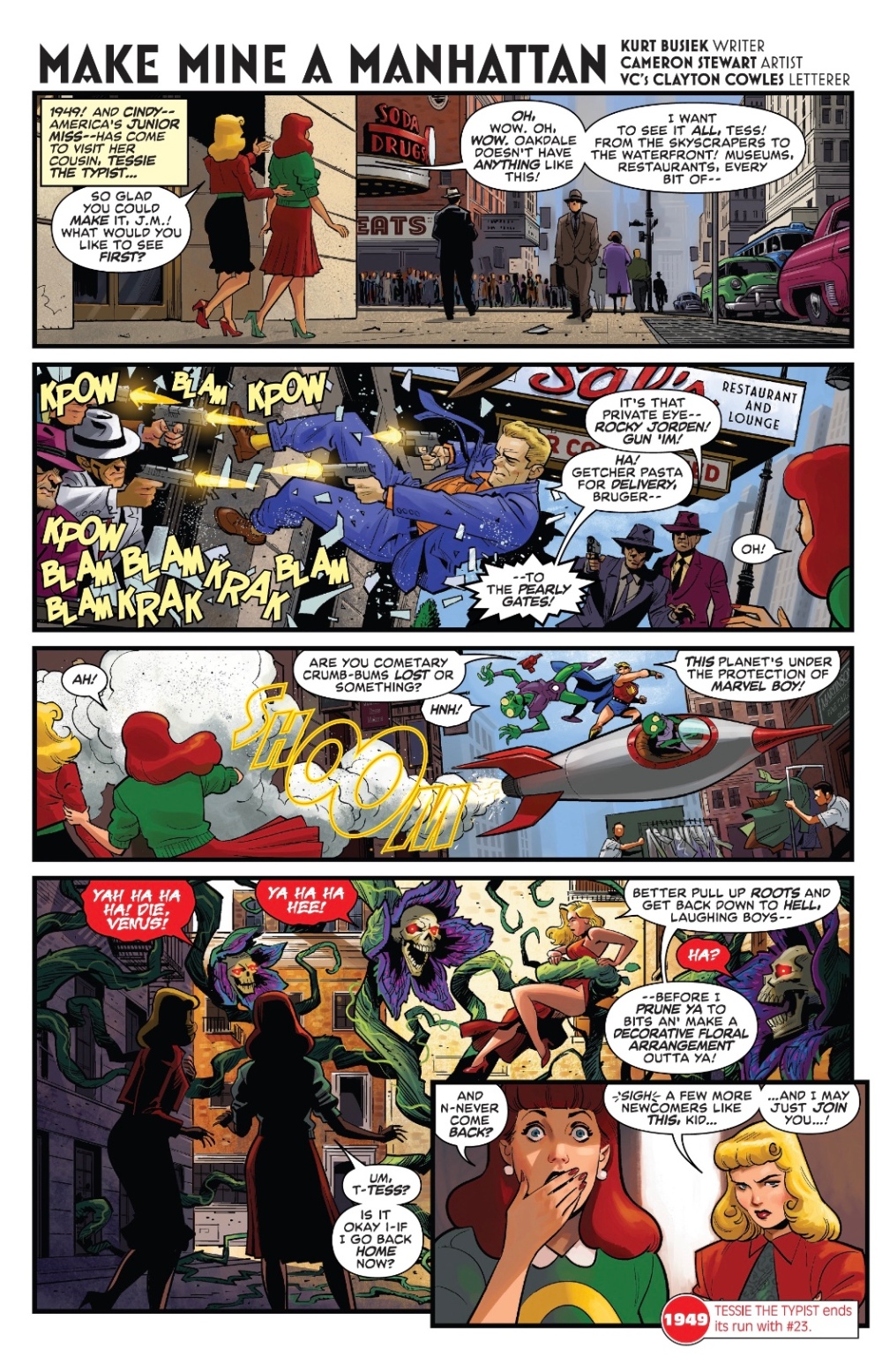 And possibly my favourite, the aforementioned 1962:

Others are less successful, such as 1971, which, although striking, bamboozles while overstating the importance of Red Wolf to the Marvel Universe.

The modern Miss America shows up for 1943 and it’s a real case of ‘Preach it, sister!’

2011 is just dull, as a YA author apparently preferred not to write a comic story… I gave up halfway through the unattractively presented page.

And 1989, apparently a tribute to the late Dwayne McDuffie, is just creepy, with its Uncanny Valley stylings.

Generally, the best work comes from actual professional comic creators – Gerry Conway, George Perez, Roy Thomas, Peter David – rather than the stunt-casted rappers/sociologists/whatever. But that is ‘generally’ – that fabulous 1962 Spidey comes from filmmakers Phil Lord and Christopher Miller and there’s a tremendous return for Marvel UK character Nightraven by UK TV writer Toby Whithouse, while it’s up and coming Marvel guy Donny Cates who gives us a depressing Spidey take on Tex Ritter’s Deck of Cards.

Still, that’s an anthology for you, not everything is going to chime with everybody. The worst sin of this comic is inventing an age-old conspiracy to add a unifying note which isn’t needed – super-agent Jimmy Woo’s search for the Eternity Mask. Created by Dr Strange character Eternity, one of the biggest of cosmic powers, it’s a black hood that makes its wearer equal to anybody else. The problem is that if it’s so significant, why have we never heard of it?

Because it’s been in the hands of the likes of the Thunderer (who?), Black Rider (ditto) and Blind Justice (you what?) and they’ve never done anything of note while in possession of it.

It really does seem to be the world’s least-effective magical artifact, but every few pages, courtesy of writer Al Ewing and a bevy of artists, Jimmy turns up, talking to someone with a connection, or to follow up a clue, and the bizarro energy of the issue vanishes. Also searching for the hoodoo-ed hood are the Three Xs, two-fisted mystery men from the Golden Age who, we’re now told, are pretty much immortal and have been hiding between the gutters of stories, looking for the mask as a step towards creating a new breed of Man. Or something. I’m not too clear on that… it really is a stretch to tell us that the three trenchcoated good guys from Mystic Comics in the Forties were also the scientists who created the future Adam Warlock in the Sixties (they apparently added an extra X man on the way, because the Lee/Kirby Enclave business featured a quartet of mad scientists).

And this being a Marvel Special, of course the story strand isn’t tied up. Oh no, tune in in 2020 for the continuing saga of the Eternity Mask!

While ambition is to be applauded, and I’ve always loved it when the likes of Steve Englehart or Roy Thomas found plausible links between characters and story points going back decades, this mask business is just too much of a stretch. Characters we’ve probably never heard of with a magical maguffin we’ve definitely never heard of that’s going to be the Next Big Thing? I’d rather Ewing’s considerable talents had been used for a tight, single-page vignette than this tomfoolery, and left room for creators who probably should be here, such as Louise Simonson and Brian Michael Bendis, and character like the Defenders, Power Pack and the New Warriors who definitely should.

And while Alex Ross’s cover is striking, the lack of Fantastic Four representation when Squirrel Girl and the unnamed crook from Adult Fantasy #15 make it on there is shocking.

Still, overall this is a worthwhile effort. There are dozens of fun moments, a few touching ones, and I love that it sent me into the wilds of Marvel Unlimited and public domain websites to read the first appearance of Gorilla Man (seriously intense, look it up), the Bronze Age reintroduction of Venus, random issues of Solo Avengers, the adventures of Tessie the Typist… We get the most authentic Howard the Duck in decades, a look at Dr Strange doing his laundry, an actual new page of Miracleman and much, much more.

As celebrations of genre comics go, I’d say this is a treat for fans of all Marvel ages.