… it’s a small distinction, but I like it – Bendis wants his two Superman titles to be distinctive and that’s a tiny, but appreciated, indicator. And any time I see ‘Comics’ in the original Art Deco font, I’m happy – could we have that on the cover, please?

As for what else I liked, there’s a nice opening page recapping Bendis’s story to date, noting that Lois and Jon have left the planet with Jor-El, the Daily Planet is in trouble, and Metropolis is beset by fires.

That first spread sees Superman foiling the theft of a safe from Lexcorp and pumping the perps as to whether they know who’s setting the fires. They say no, but new Planet city reporter Robinson Goode has heard something.

Superman visits new Metropolis fire chief Melody Moore, who almost seems to be giving credence to the idea. Our hero takes her to the source of the story, Darryl, who admits he was paid to lie to Moore by ‘some big bald dude’. Rather than turn Darryl in, Superman has a suggestion that will do more good.

At the Planet, Clark looks at his file of heinous ‘big bald dudes’ before being interrupted by the paper’s gossip columnist, Trish Q.

She’s fixated on the whys and wherefores of Lois not being around – she’s supposedly off writing a book, but it turns out Trish has heard a rumour.

Just outside the city, there’s a gathering of the Metropolis Mafia.

One of them doesn’t survive the occasion. 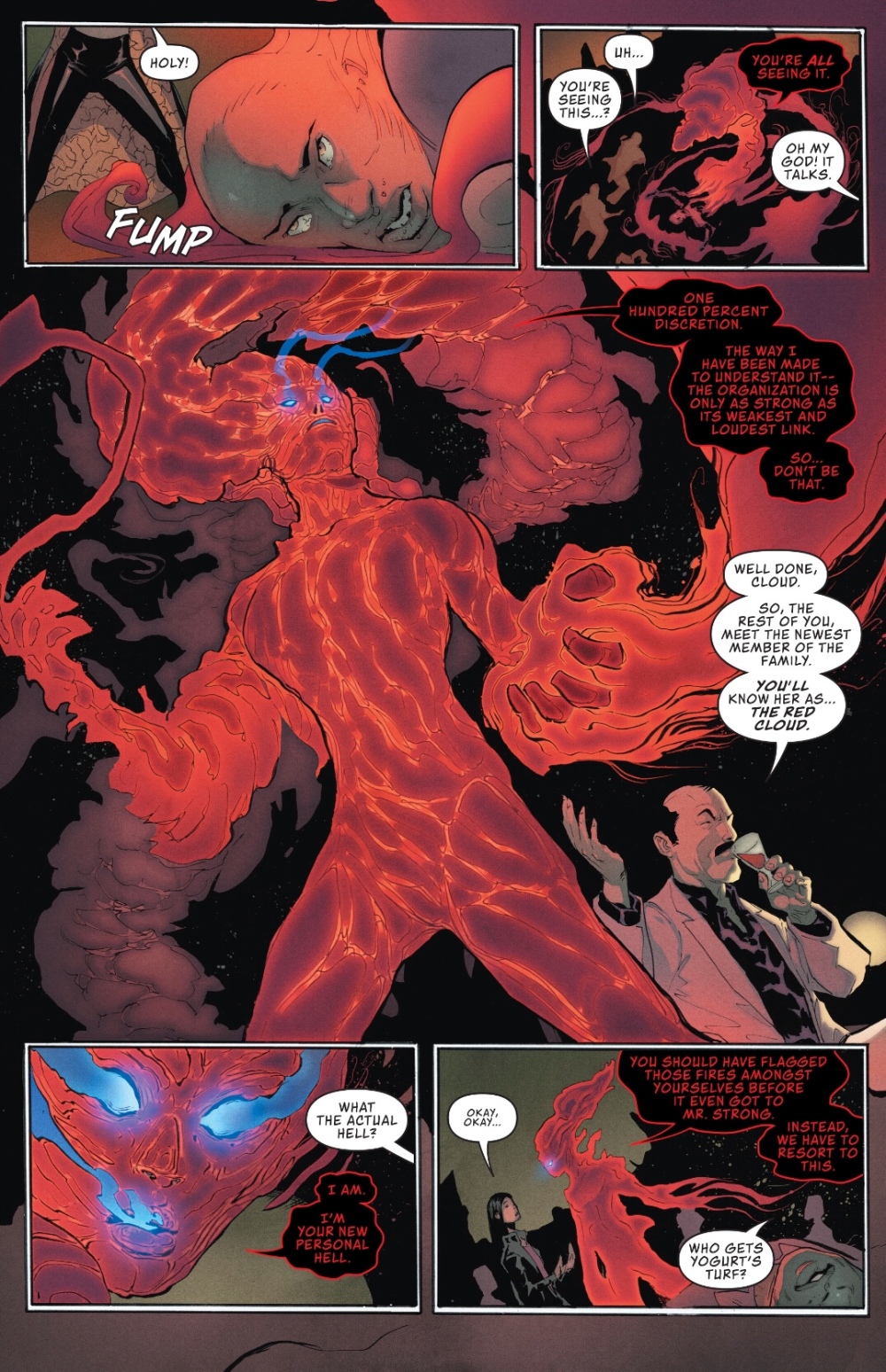 And that’s a moment I wouldn’t spoil, but every DC Universe book this week carries a plug for thus issue giving all sorts of details. So yes, here’s the Red Cloud and I like the visual. What she can do beyond gas goodfellas, I don’t know, but her arrival makes things a little more fantastic in what had been a very street-level tale. Bendis has said he wants this to be the Daily Planet book and Superman to feature the showier stories. He headlights the smaller focus of Action via Melody Moore. 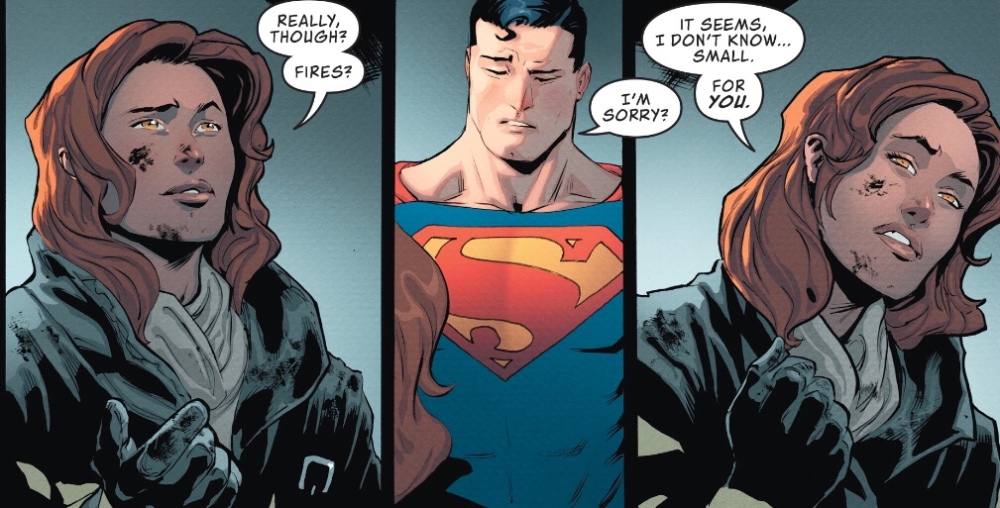 And I agree, but Superman started off sorting out wife beaters and corrupt politicians so the occasional down to earth story is good. And if a sentient fart does show up, no problem.

What is a problem is the inclusion of DC boss Dan DiDio and Bendis himself among the villain headshots – a self-indulgent gag that pulls me out of the issue. Knock it on the (bald) head, Brian.

Otherwise, I like the script a lot. Rumours figure big this time, and I’m interested to see how Bendis interprets the Fake News age.  It’s a big relief being away from the Rogol Zaar business that dominated the Man of Steel mini-series – I believe Action is set a few months after Superman, which will be continuing the Zaar business, and that really should be noted in here. Little details such as the hoods’ meeting place, and their avoidance of those key words we’re told Superman listens for, are smart. The opening action sequence has the most ‘Bendisy’ dialogue since his move from Marvel, it’s almost irritating in its smartyboots back and forth-ness, but Bendis doesn’t write the whole issue that way.

There are gags – Jimmy Olsen gets the best one – but there’s emotional heft too. I’m thinking particularly of the scene between Clark and Trish – he doesn’t say much, but the information is right there in the art.

Ah yes, the art. Action is blessed to have, on art, Patrick Gleason, co-writer and occasional illustrator of the past couple of years of Superman, which were rather brilliant. I’m still not happy he and Peter J Tomasi are off that book, but it’s good Gleason is still a presence. And a rather strong one at that, from the opening shot of Clark’s typically messy desk (if that’s a genuine H-Dial, he really should put it out of sight) to the surprising last page, taking in such nicely told moments as Superman’s bullet-catching and the arrival of the Red Cloud. There is a hugely cheesy image of Superman floating in front of the US flag, but there’s likely a quota DC has to meet.

Gleason seems not to have settled on a style for this book, yet; at times his Superman is a little Dave Gibbons, or Frank Quitely… the cover is seriously Scott McDaniel. I say, let’s have pure Gleason.

There is one spread that’s not worth two pages – a guy watching Superman on multiple monitors. It’s seriously underwhelming. I suspect the memo that books now priced $3.99 were going up to 23 pages came late in the day and Gleason had to pad the issue.

Alejandro Sanchez colours with sensitivity and, interestingly, dials down Melody Moore’s hair from its Man of Steel flaming red to a calmer chestnut. I hope that tone sticks, so we can all stop thinking of Lana Lang whenever she shows up. And thanks to Josh Reed for some sharp, non-intrusive lettering – I’m so over faffy, overly-showing fonts >cough Dark Knights Metal cough<.

This is better than the conclusion of Man of Steel. Superman is back to his compassionate best, especially in the scene with Darryl, subplots such as Trish’s nosiness are deepened and there a heck of a last-page tease. Bendis and Gleason show the potential for a pretty decent partnership, the latter’s knack for conveying emotion through face and body being a real asset when interpreting a script as conversational as this. And few can touch Gleason when it comes to the flashier moments.

I’ve started many a Brian Bendis run enjoying what’s on offer, before being turned off by certain aspects of his style. Here’s another good first issue – let’s hope the quality keeps up.