She’s not mentioned, but the shadow of the cat is all over this issue. Last time, Catwoman ran out on Batman rather than marry him, having been convinced that a happy Batman would be an ineffective Batman.

This issue begins with Bruce Wayne offered what might be a welcome distraction – the trial of Mr Freeze, with him as a juror. But guess who brought an end to his latest criminal outing?

Mr Freeze confessed to Batman that he’d murdered three women, but now he’s taken those words back, claiming an extra-scary Batman forced him to ‘admit’ something he hadn’t done.

Selina has gone, and a court curfew prevents the jilted Bruce from taking out his anger on bad guys as the Caped Crusader. There is a Batman answering the Bat-Signal, but it’s not Bruce.

On a break, we see that Gotham’s favourite billionaire is feeling a tad frustrated.

Eventually, cases for the prosecution and defence heard, the jury must retire. But how will Bruce vote?

I believe a man can swing around Gotham dressed as a cloth bat, but I can’t believe any jury pickers would allow someone who’s been saved by Batman on a panel, never mind the man known to have funded Batman Inc. I have less problem with Bruce not getting himself exempted by some means or other, because conflict of interest be darned, he’s a blooming vigilante! He works for Justice, not the letter of the Law.

I’ll simply accept that writer Tom King has a story he wants to tell that involves Bruce smashing ceramics and see where it goes. So far, it’s post-non-wedding gloominess, as I feared we’d get after last issue. Batman is extra-hard on suspects, like he was after the death of Jason Todd… maybe Tim Drake will appear and offer him a nice calming new sidekick – he’s down to just 14 or something.

This was an entertaining enough issue, with its flitting between jury room and Batman’s latest encounter with Mr Freeze, and the ending is intriguing. The art from Lee Weeks and colourist Elizabeth Breitweiser is a total treat, with my favourite visual being the splash page looking from above into the jury room, with the title of the issue on the wall.

Mind, there’s no denying the power of that bathroom moment, a scene which shows Bruce badly needs therapy.

And that page with Dick and Killer Croc, wow!

I’m really not keen on Batman being quite so unable to deal with heartache… is this King setting him up for a visit to the Sanctuary post-trauma centre coming up in his mini-series? He’s really out of control here, and it makes me want to abandon the book and go read some back issues with a nice sane Batman.

At one point a juror mentions being cold – could Victor Fries have a henchperson in there? And is that Infinity Inc’s Nuklon on the jury? 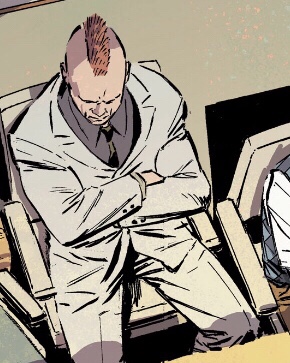 Probably not, but it’s a distracting artistic choice.

After months of build-up to the marriage, it’s refreshing to have an issue free of heavy romance. I’d have been happier, though, with a cleaner break, some back to basics storyline with recent events referenced, but not used as an excuse to throw Bruce into a morass of pain. I don’t doubt he’ll climb back out, but things could get very tiresome before then.