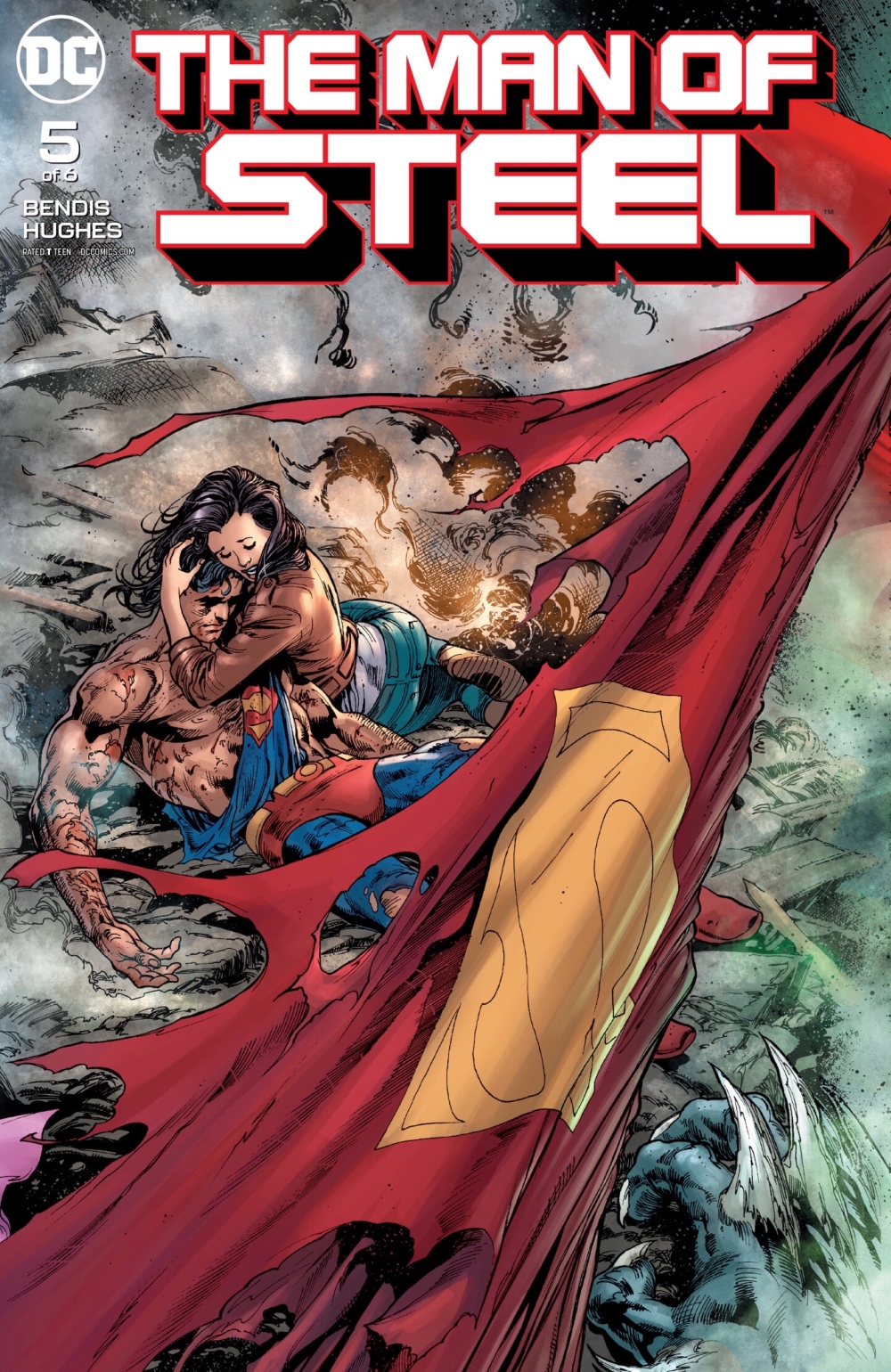 Last issue ended with Superman unleashing his flare power, the entirety of his stored yellow sun energy, in a bid to bring down Rogol Zaar. Which meant this issue would see him powerless for 24 hours, until his body had absorbed enough solar rays to power him up again.

This issue opens with Superman dragging the creature who claims to have murdered Krypton into space, to battle him away from his adopted world.

I’m not sure how that works. The solar burst business is relatively new to the Superman canon, having debuted with Supergirl in the New 52 period and been adopted by the Superman title shortly afterwards. It seemed to have been forgotten, but there it was in Man of Steel #4, a drastic play by a desperate hero.

We know from the Meanwhiles of this issue that we’ve not had a day between chapters, the opening follows directly on from #4, suggesting writer Brian Michael Bendis is ignoring the most interesting aspect of the solar flare. There’s something else he looks to be whistling merrily out of continuity this time, but I’ll get to that. 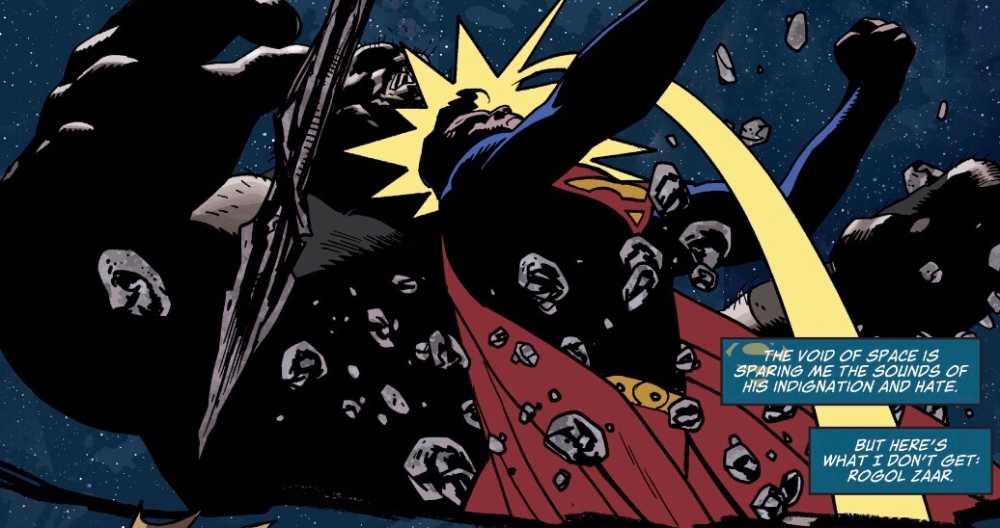 Short recap. Superman and Rogol Zaar fight above the Earth and Kal-El is beaten into the lunar surface. Down below, Metropolis fire chief Melody Moore tries to see a pattern in the arson attacks on the city, and Supergirl helps out with the latest blaze. 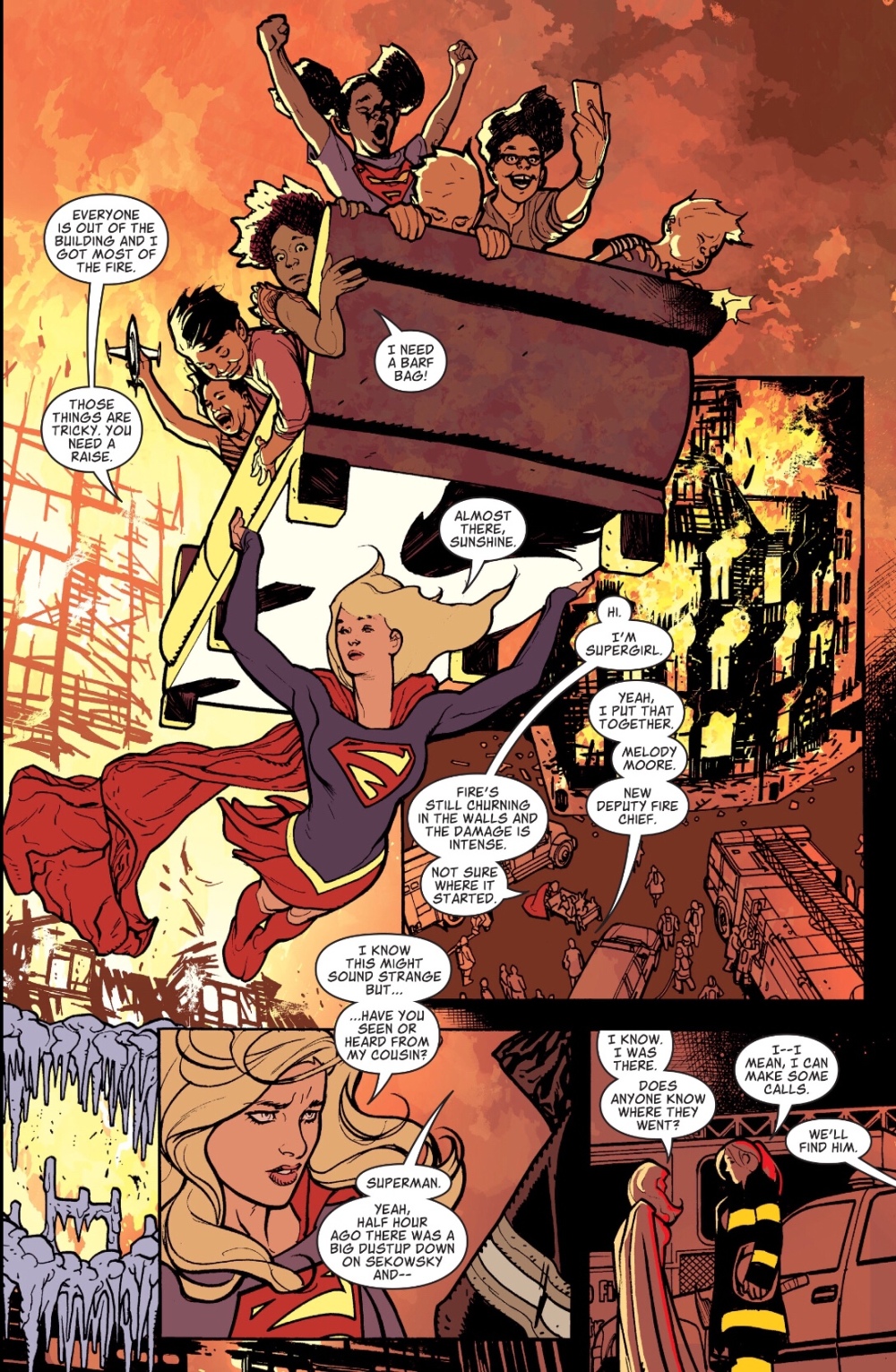 The Justice League arrives to help and Kara works out where her missing cousin likely is. 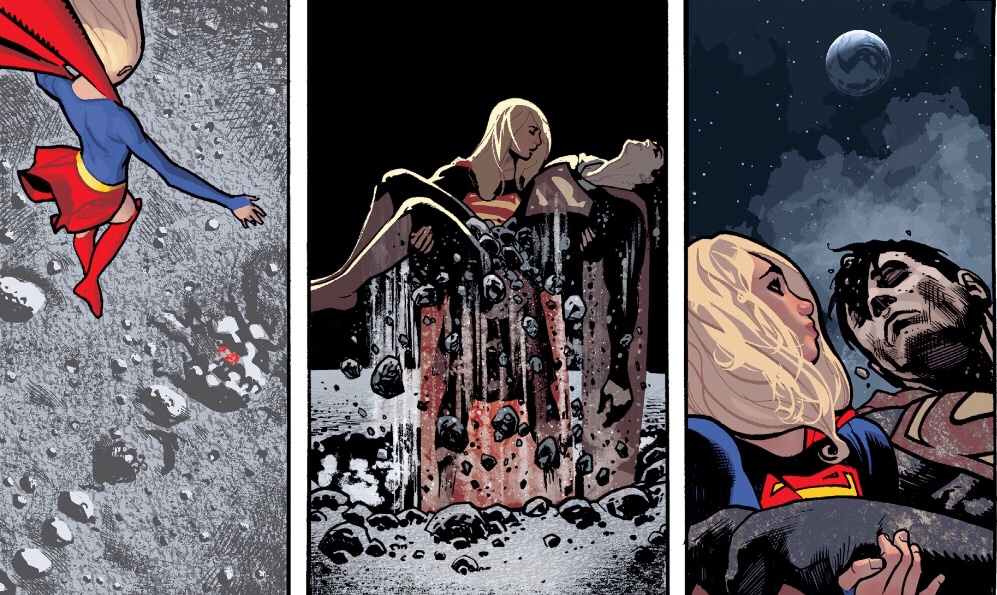 The moon. Supergirl takes Superman back to the League’s new Hall of Justice HQ, where he soon wakes, and realises what Rogol Zaar’s next move is.

That’s the present day story in Man of Steel #5, but we also get four pages continuing the flashback which has seen Jor-El appear in the Kent apartment and ask to be entrusted with his grandson, Jon. We see what he wants…

… but not what he gets. I suspect Superman doesn’t stand in the way of Jon going, and Lois insists on accompanying her son and Jor-El. After all, would you want your kid, however super, going off into space with a literal relative stranger who ran a global terror organisation, when he wasn’t kidnapping superheroes, villains and Mr Mxyzptlk.

None of which is mentioned in the four page scene; yes, Lois and Clark say ‘a hard no’ but you’d think they would verbalise their reasons. And it’s not like Jon doesn’t know his paternal grandfather is, to be kind, deeply disturbed. But that’s all glossed over and while it may come up next time, this is the logical moment. Has Bendis removed it from continuity. God knows, I’d like the entire Mr Oz arc erased, but you can’t do that while still having a scarred, oddly coiffed version of Jor-El alive.

My other problem with this issue, beyond the Jor-El and solar flare business, is that Rogol Zara’s entire motivation is to kill Kryptonians. He has Superman near unconscious on the moon, he swings his axe… and doesn’t decapitate him.

A more minor moan, but something that irked me, is how Bendis writes the Flash. 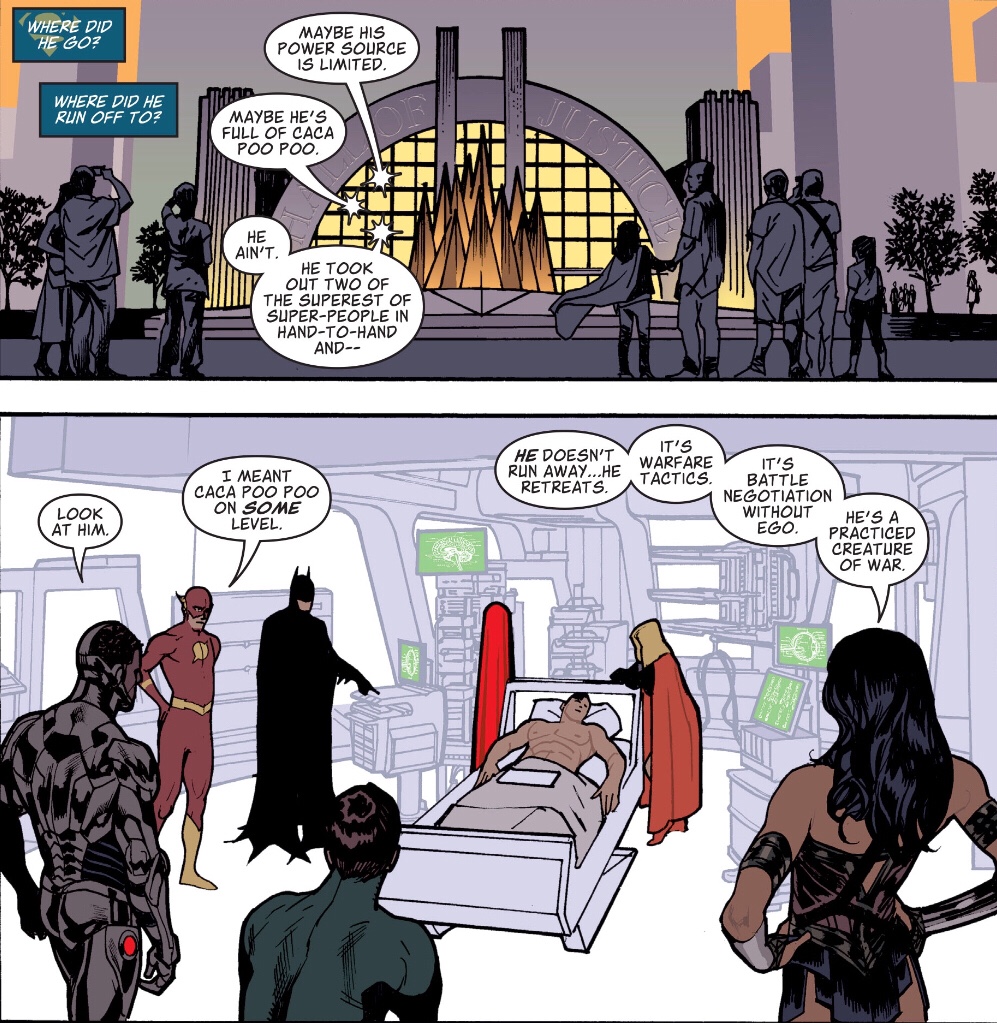 Like a lunatic man-child. Is he going for the version seen on the big screen? If so, why? That guy’s an idiot teenager, the comics Barry Allen never has been, and never should be, an immature prat.

There were things I liked in the script: the arrival of Supergirl is pure delight, the understated reverse homage to Crisis on Infinite Earths #7 is cute, the fire house scene was nicely done, and Flash apart, the League scenes were great. There’s something STAR Labs has advised Superman not to do that makes good sense, and Bendis continues to show the warmth between the Kryptonian cousins with real skill. 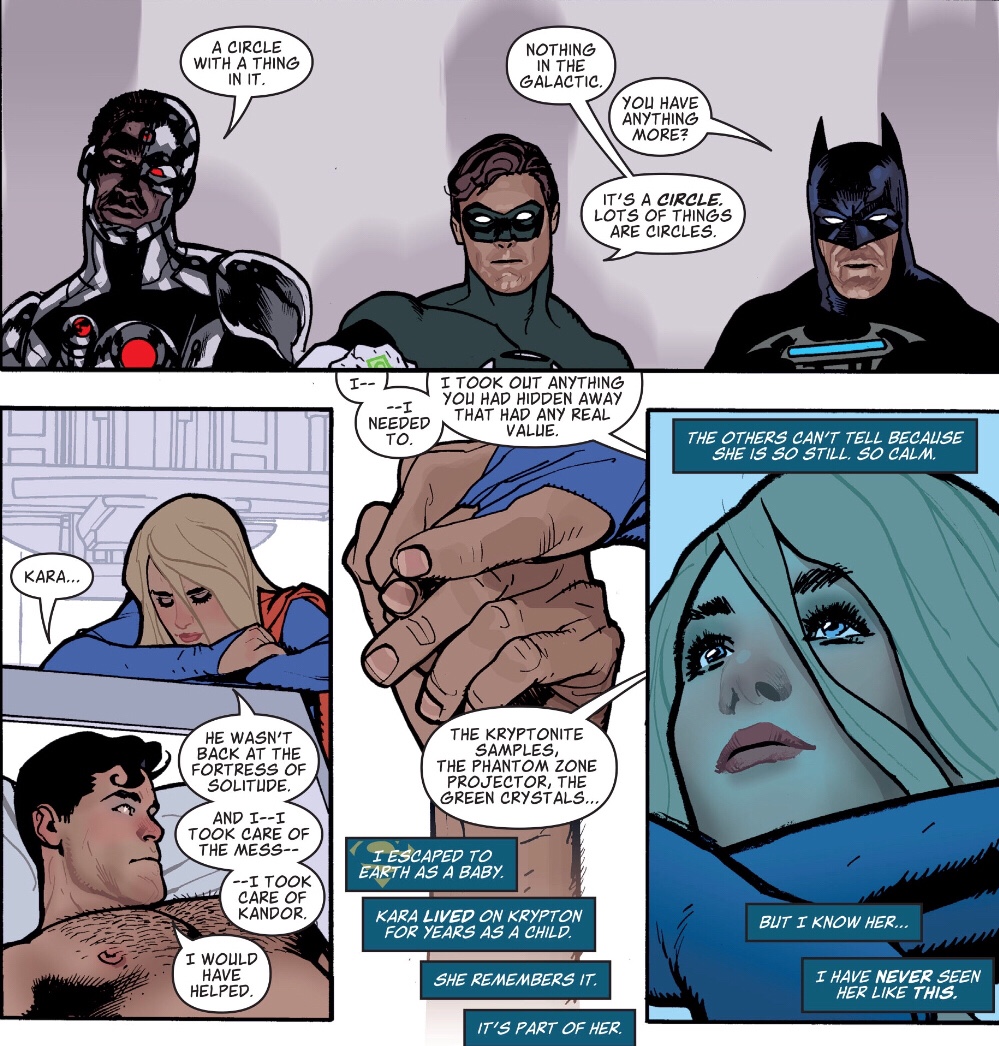 He’s aided enormously by the nuanced art of Adam Hughes, who illustrates the bulk of the issue – the Jor-El scene belongs to the excellent Jason Fabok – in full colour. And it is glorious, with standout visuals including the Metropolis fire, with Green Lantern’s ring glowing against the burnt oranges, the mayhem on the moon and a climactic spread I won’t spoil. Little details like Superman’s cape draped over the hospital bed are lovely. The most impressive moment of synergy between writer and artist is the opening splash page, with Superman pondering the fate of the Kandorians, as Rogol Zaar eyed their bottle city. 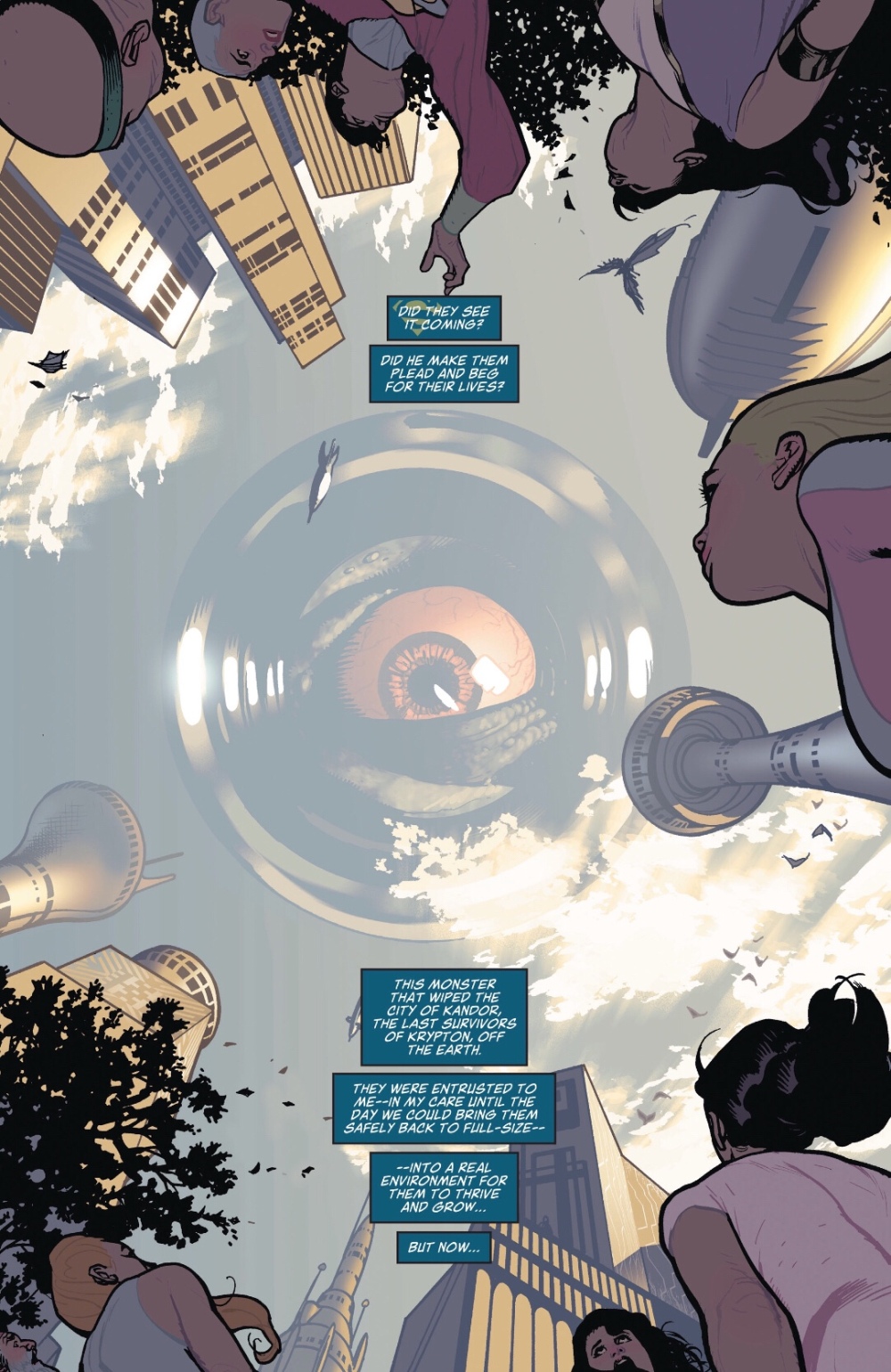 The cover is a look back to the Death of Superman – well done by penciller Ivan Reis, inker Joe Prado and colourist Alex Sinclair, who handles the interior Jor-El sequence, but it’s an image we’ve seen so many times… I’d rather see something from this issue, something new.

Despite the problems I had this time, I’m still enjoying this mini-series, and looking forward to next issue’s wrap. This being a Brian Bendis story, I’m not convinced we’ll actually get clarification of the various mysteries, but I live in hope. At the very least, more neat nuggets of characterisation, and outstanding art, is guaranteed.