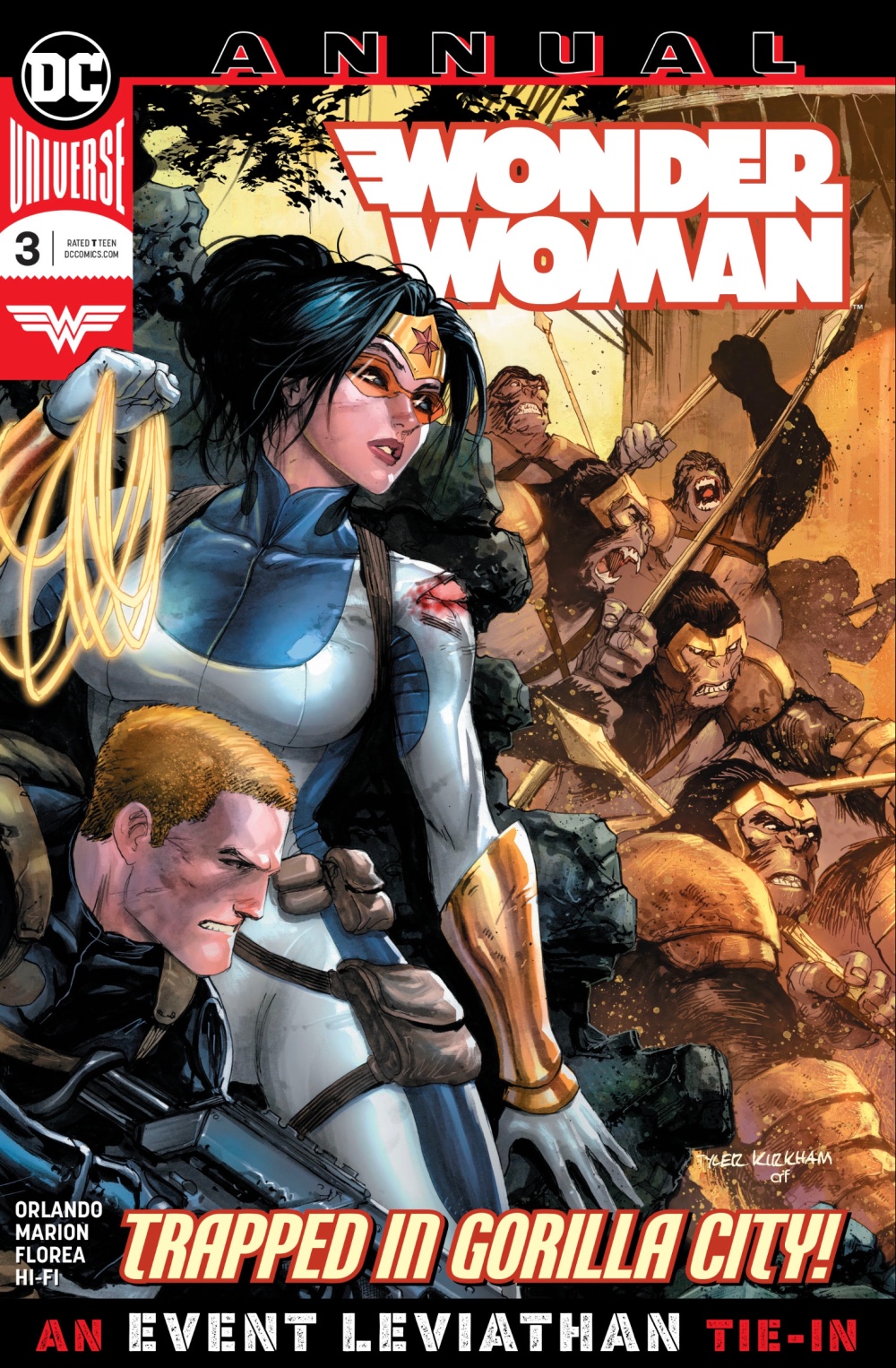 Twelve years ago Wonder Woman rescued a young girl after her parents were killed in a terrorist incident on American soil. She placed the child with retiring agents of the security organisation Argus, and kept in touch.

Five years ago, young Helen, now a valued agent of Argus herself, is on a mission to Gorilla City with Steve Trevor and Diana to rescue a colleague who went undercover to spy on Super Gorilla Grodd.

Two weeks ago, Argus headquarters is blown up by the mysterious Leviathan. Helen escapes the blast, and is confronted by the mysterious antagonist. They seem to know more about Helen’s past than she herself does.

Leviathan tells her that her family is descended from the valkyrie Gudra, ancient enemy of the Amazons. Over the centuries the family name evolved and became… Von Gunther!

Helen’s birth identity was Paula Von Gunther, a name familiar to longtime Wonder Woman fans. She’s a villain dating to the Golden Age who eventually became a friend and ally of Diana. This version looks to have gone in the other direction, as she takes on the identity of another old enemy of Wonder Woman, Ari Buchanan, Warmaster.

Writer Steve Orlando has my admiration for tying Helen/Paula to Gudra, sometimes known as Gundra, another Golden Ager. Gundra… Gunther – that’s clever stuff. What’s less convincing is Leviathan asking her to be his spy in Wonder Woman’s camp… their appearances in Action Comics and Event Leviathan emphasise that Leviathan isn’t playing a long game, they’re enacting a plan the morning after covert organisations such as Argus are taken out.

Equally curious is the idea that Helen would feel so betrayed by Diana’s lie, and ‘failure’ to stop Leviathan attacking Argus, that rather than talk to her, make her feelings known, she’d fall in with the villain who – so far as she knows – has killed her colleagues. All right, brainwashing was involved, but we already had this years ago with Vanessa Kapatelis – I thought we were over this kind of ‘my feelings are hurt, I shall become a villain’ bit. Plus, Helen is an Argus operative, she knows Diana simply can’t be everywhere at once, save everyone; she’d surely be glad Diana rescued her as a child and call everything else gravy.

Most mystifying of all is the idea that Diana would lie to Helen in the first place; yes, she might not tell Helen immediately, but once she was older and her adoptive parents raised the matter, Diana should have explained everything. I mean, ‘refined truth’? That’s weasely politician talk. Did she have to throw the magic lasso (I will never like that ‘Golden Perfect’ term, it’s pompous and silly and not even a noun) 100 feet away to allow her to fib?

But, Orlando is a darn good comic writer, and this is the first chapter of his run as regular Wonder Woman scribe. Perhaps this isn’t Leviathan, but Dr Psycho, or Mars, or the Duke of Deception. Maybe Helen plans to be a double agent in the service of Good. Orlando certainly deserves credit for putting ideas of Right and Wrong before us for debate – this issue has Diana condemning Argus for sending a spy into Gorilla City even as she tries to rescue him. Steve Trevor reckons Grodd has no right to rule Gorilla City and should be taken down; Wonder Woman believes that so long as he is ruler, he should be left alone… until he abuses his power. That’s what Diana thinks he’s doing in torturing Argus agent Karmak, a massively obscure DC super-gorilla who fought Batman in the Sixties. There’s talk about whether or not Grodd rigged Karmak’s trial after his infiltration was discovered, which I don’t get – why would Diana ever expect fair treatment from a mad, telepathic gorilla who has brutalised superheroes dozens of times?

Orlando takes care to show Steve as a man of violence, whereas Diana strives for a peaceful solution until she’s spurred to violence; I suspect we’re going to get a very interesting take on their relationship in the regular series.

I’ve commented in recent years that Grodd has been portrayed in too bloodthirsty a manner, biting off heads left, right and centre. Not here – Orlando’s Grodd talks a terrifying game, and is undoubtedly savage, but the presentation isn’t over the top.

The timeline seems a tad squiffy, Helen looks ten at most when she was rescued from a fire by Diana – shades of Donna Troy! – and we’re told that was 12 years ago. Five years ago she was adventuring with Steve and Diana and a terrific dinosaur-laden spread tells us she’d had loads of adventures before that – is this another example of Dr Manhattan squeezed timelines?

And while it’s fun to see Diana in her old Department of Metahuman Affairs uniform again, with some Wonder-branding, why is she wearing it to Gorilla City? Either go totally covert or wear the regular outfit, surely?

Questions, questions… but I did enjoy this issue a lot. Orlando writes a fun, thoughtful romp, digging deep into DC history to add texture (I’ve not mentioned all the cameos and nods by any means) and he obviously has a grand arc in mind. I’ll certainly be around to see where he takes Diana and friends.

The art didn’t hurt, either. V Ken Marion pencils, Sandu Florea inks, Hi-Fi colours and together they give us good-looking pages with no storytelling problems, but dynamic action, well-considered backgrounds and appropriate expressions aplenty. The Gorilla City scrap is particularly good, with sneaking and bashing equally watchable and effective. Letterer Pat Brosseau deserves a tip of the hat for his splendid Scratchy Grodd font. Plus, there’s a grabber of a cover from Tyler Kirkham and Arif Prianto.

Wonder Woman Annual #3 is a chunky, thoughtful, nice-looking read and, while it has a fair few head-scratching moments, they’re far from dealbreakers. It’s made me optimistic for Orlando’s tenure on the book – and if he brings Marion and co along for the ride, great!