Sometimes annuals are set up as unmissable stories – done-in-ones debuting a new villain, or bombastic conclusions to long-running storylines.

Aquaman Annual #2 is neither. It’s a small-scale tale with big moments and a good old-fashioned – but far from inessential – moral.

Lex Luthor’s Legion of Doom signal hangs in the sky, inviting people to choose dark over light. And in Amnesty Bay, home of Aquaman, one man has answered the call, interrupting a spot of loafing by Aquaman, new pal Jackson – the latest Aqualad – and pet pooch Salty. 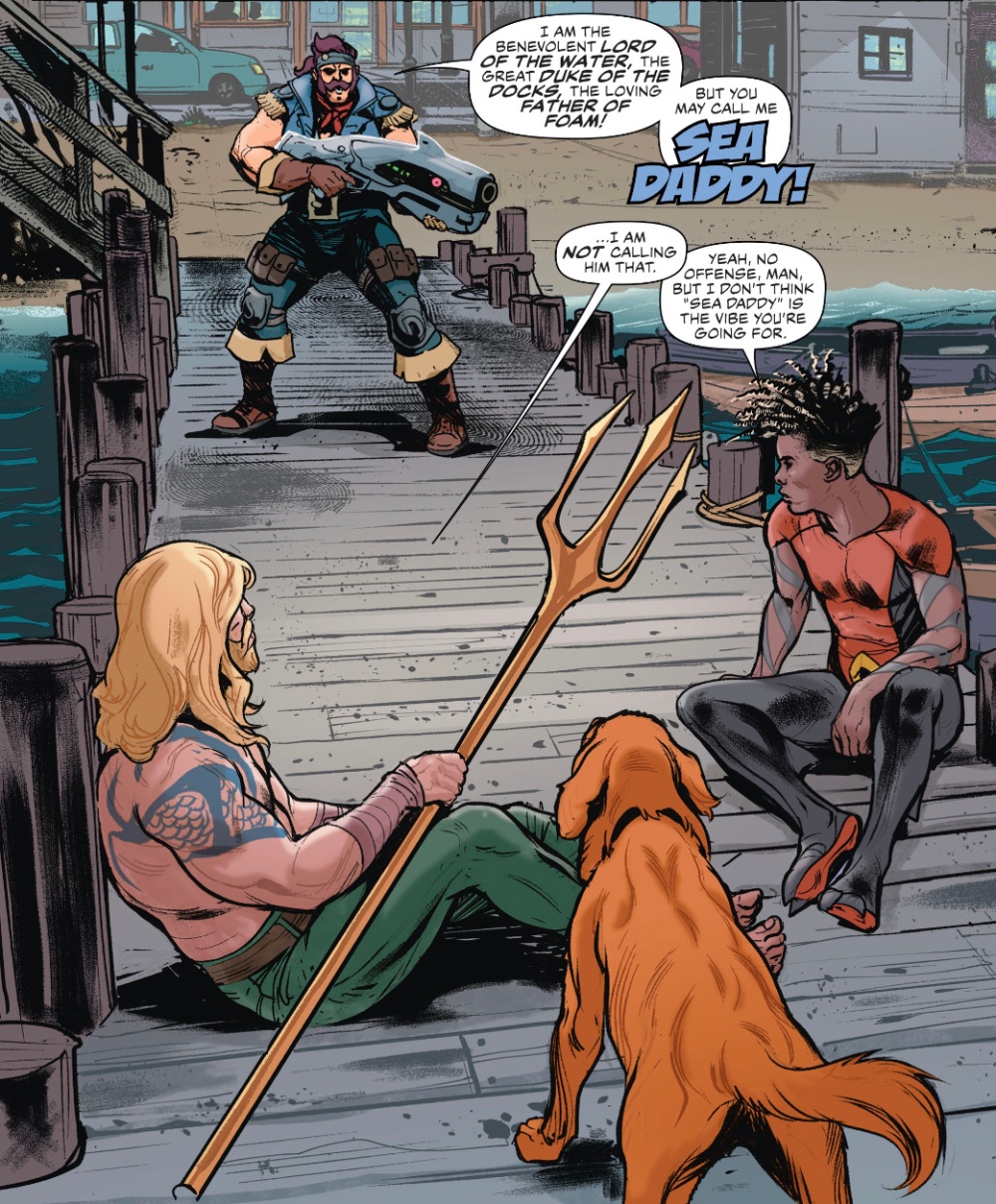 While Sea Daddy isn’t a massive threat, Arthur and friends underestimate how much damage one idiot can do.

Fireworks and food are waterlogged. And local lad Royal is royally miffed.

Arthur isn’t one to give up easily – leaving Jackson and Royal to put together a new celebratory bonfire, he sets off to find replacement rations. Along the way he bumps into Atlantean ally Tula, aka Aquagirl, who tells him Salty is missing.

In Amnesty’s supermarket, tensions arise as one of the town’s newest residents, Atabey – an elder goddess, don’tcha know – gets into a row with a clerk.

I do feel for the people of Amnesty – when it was just Aquaman living among them, things weren’t disrupted too much… the occasional super-villain was the most they had to content with. But now they’ve a bunch of deities around the place who define ‘mercurial’. And it’s Arthur who has to keep the peace without punching anyone.

The deft script by Kelly Sue DeConnick and Vita Ayala mixes the everyday and the Uncanny to great effect. I’m still getting used to the more Momoan merman Arthur’s become, but given he’s recently been through a heroic crucible, it’s not surprising he’s a tad changed. And I do like this affable, exasperated Aquaman – one thing that’s not altered is his heroism. And the end note of this issue will warm the heart of every veteran fan.

My only niggle with the script is one character spelling out to Aquaman the Moral of the Story – there’s really no need, the writing is good enough that we get it. The Show is there, the Tell unnecessary.

But, the way the character spells the lesson out pretty much excuses it; they reckon Arthur’s so dense that he needs life in large print.

The main point is that this issue contains a fabulous blend of action, character work and, actually, a lesson that bears repeating. And the Year of the Villain nonsense is cleverly used as background to proceedings.

Plus, we get some Salty. Who doesn’t love Salty?

Victor ibáñez does a bang-up job with the visuals – the storytelling is clear, the characters on model, the body language terrific, the emotions nailed and the backgrounds present and convincing. I especially like that the folk of Amnesty are a diverse bunch, people I can imagine having their own lives. His bulkier than traditional Aquaman recalls the movie version without it being Jason Momoa.

And boy, is he good at angry gods…

The colours of Jay David Ramos are as additive as you could ask for, bringing extra definition and mood to the pages, while letterer Clayton Cowles finds the moments in the script that allow him to show off a teensy bit. The whole creative team, including editors Andrea Shea, Alex Antone and Brian Cunningham, should take a bow.

If you’ve not been reading Aquaman of late, this annual is a nice taster of what we’ve been getting. If you’re already reading, I think you’ll like this even more.