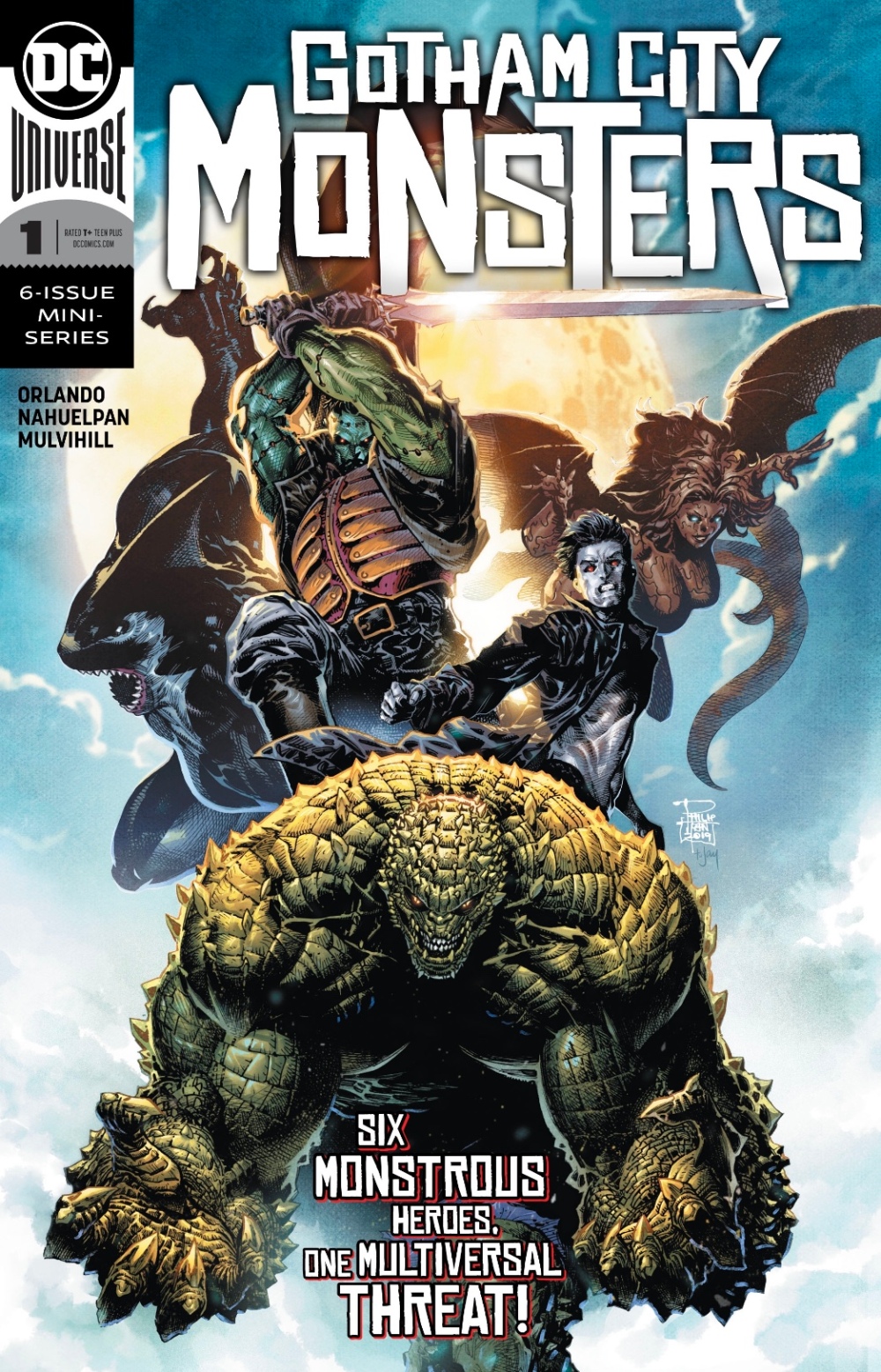 In the dark night of Gotham, an eternal battle continues.

Across town, a career criminal is hoping to turn over a new leaf.

In a bar, a spy with no home carries on his work.

Beneath Gotham Harbour, a creature mourns for the woman she once was.

A woman of clay yearns to find herself.

And in a theatre, spellbinding primates bide their time. 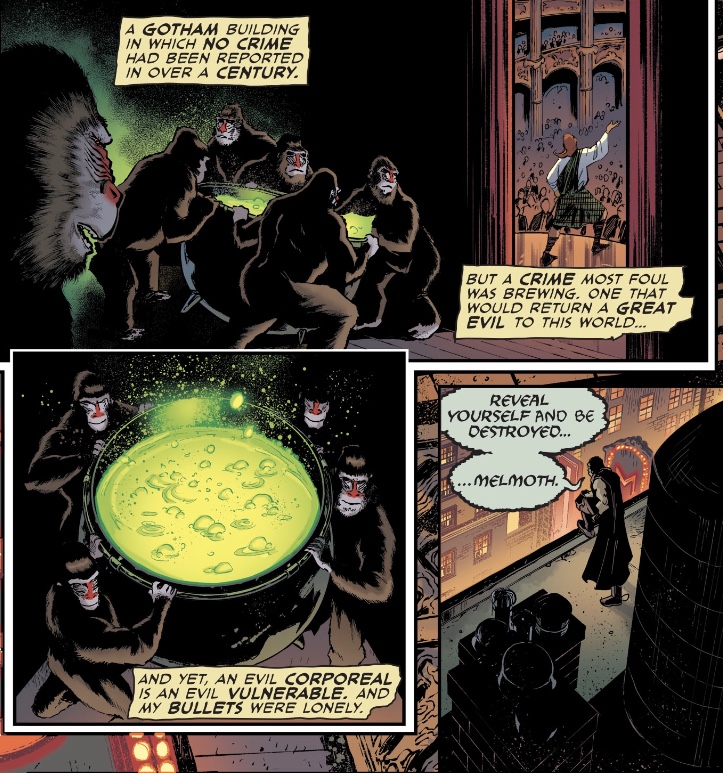 Isn’t that an arresting image? This opening chapter of a six-issue mini-series is packed with them, courtesy of illustrator Amancay Nahuelpan and colourist Trish Mulvihill. The mind behind the madness is Steve Orlando, who has written such DC books as Supergirl, Justice League of America, Electric Warriors and The Unexpected. This is peak Orlando in that we get a densely plotted narrative that demonstrates his love of words, with deep dives into DC history. Set in Gotham’s Monstertown district against the background of the Bane story in Batman and the Leviathan business in Superman, the story teams up two of my favourite spooky characters, Frankenstein and Andrew Bennett – briefly at least – as an ancient menace begins casting his shadow over the already shaded suburb. With Orca, Lady Clay and Killer Croc also around, we’re set for a rich witches’ brew.

Frankenstein and Bennett, both lonely, eternal wanderers, can easily hit levels of self-pity that Norris Radd would envy, but Orlando keeps these gloomiest of heroes just melodramatic enough. They don’t hit the self-parody button, instead they look set to be formidable partners – both driven immortals, each could prove the friend the other needs.

Killer Croc recently served with the Suicide Squad, resulting in a pardon for his crimes, meaning this is the perfect time for him to look for a new path. As I’m a sucker for bad guys seriously trying to go straight – think Clayface I in Detective Comics as opposed to readers being told the likes of mass murderer Magneto are actually pretty heroic – I’m rooting for him.

I’ve read very few Orca stories, and she seemed a proper hard nut, but I’m happy to see what part she’s going to play. As for Lady Clay, she was always pretty tragic and I’ve hoped to see more of her story. Speaking of whom, does anyone understand that bit about her sending her clay feathers out into the world?

My big qualm with this book is that Orlando is going to get too ambitious – making the big threat Melmoth, from Grant Norrison’s sprawling Seven Soldiers project, opens the door to all that overcomplicated Sheeda business. If he can just keep all the fairy folk at bay, and contain Melmoth, I’ll likely stay interested, but I worry about that cover line – multiversal threats simply don’t suit Gotham books, and I’ve had my fill recently with all the Batman Who Laughs tedium.

But, I have a lot of time for Orlando, there’s a humanity at the heart of his work that should serve his creepy cast well, so I’ll give this a few issues.

Oh, and did anyone else get a kick from seeing music by obscure DC freak band Scare Tactics on the jukebox? Plus, we get the Mad Monk from the Golden Age of Batman while Monstertown links back to Professor Hugo Strange, from the same era. Steve Orlando… he’s one of us. Google-gobble.

The art by Nahuelpan and Mulvihill will probably keep me reading all on its own, every page is beautiful – sometimes with a tender tone, at others there’s a distinctly savage set, but every scene drips with dramatic storytelling. My non-comic reading other ’alf even leant over to admire a splash page of a particularly explosive nature, declaring it 3D-like. The only tweak I’d like to see would be Nahuelpan ignoring the New 52 model sheet and returning Bennett to his classic middle-aged look, because the Twilight look doesn’t do his character justice. Hey, if Amanda Waller and Lobo can go back to their classic looks…

Tom Napolitano’s letters are a treat throughout, and I like the series logo on the final page a lot. DC went with another on the cover, and that looks terrific too. Mind, an opportunity was missed to get Andrew Bennett’s logo in after that delightfully contrived bit of dialogue in the panel up top.

Talking of the cover, the image from drawing guy Philip Tan and colouring fella Jay David Ramos is simply stunning. I’d love to see it without the masthead.

If you like Gotham stories, misunderstood monsters, DC continuity, ornate language, fabulous art/any/all of the preceding, give Gotham City Monsters a try.