Oh, how I love a good old-fashioned cover with an intriguing situation encapsulated by dialogue; I think DC has some kind of linewide word balloon cover stunt this month. Whatever the case, this nicely previews one of the plot points from this issue. But there are more. 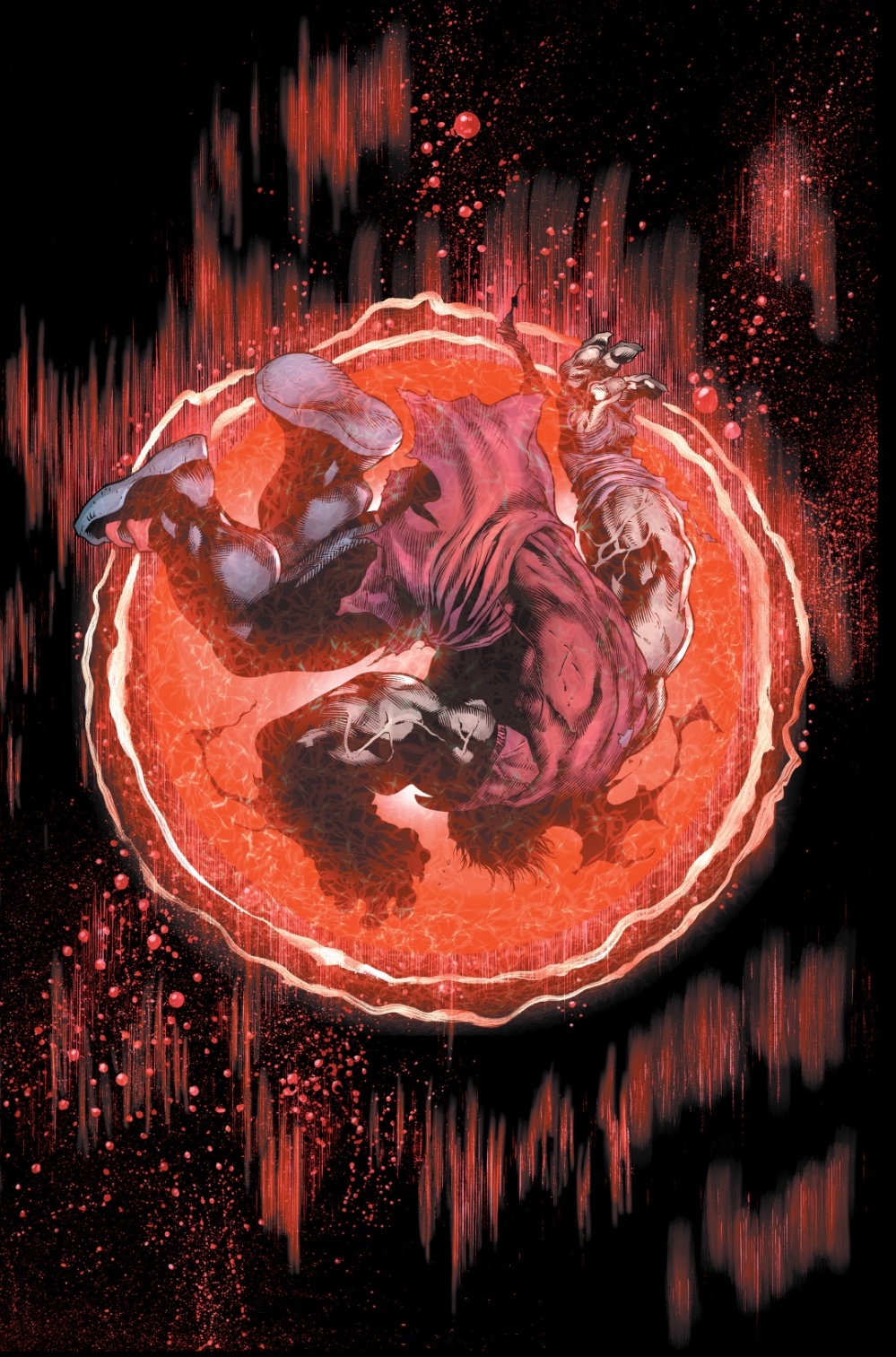 Starting with… What the heck are we going to do with Rogol Zaar, the Krypton killer?

Will Jon Kent join the Legion of Super-Heroes in the 31st century?

What of Zod’s hopes for a New Krypton? 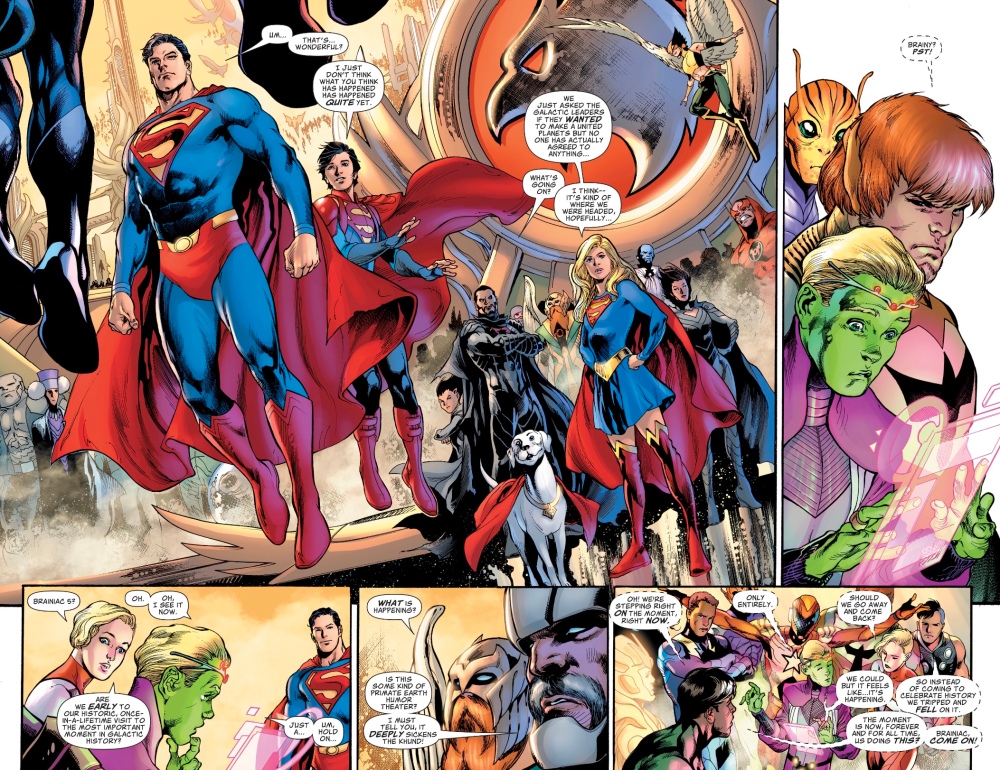 And best of all…. can’t those crazy Legion kids tell the time?

Some super-genius! OK, Brainiac 5 should be better than to arrive four minutes early, but it’s not like the various versions of him down the years don’t have form. And the Legion really suits goofy.

Plus, as it turns out, the 31st Century’s greatest teens arrived at exactly the right moment to do the most good.

So, Jor-El is sent back to ‘his original place in the timestream’. Well, yes and no. He was first plucked from the moment of Krypton’s destruction by Dr Manhattan, and while he’s sent back to the day the planet exploded, it’s not quite the same moment, otherwise he’d not be able to yell an encouraging message to his younger self. I suppose writer Brian Michael Bendis decided not to wave away the entire Mr Oz Experience (insert Seventies prog rock reference here) because that would have caused decades of history to be rewritten, even though it sounds like that’s exactly their plan. 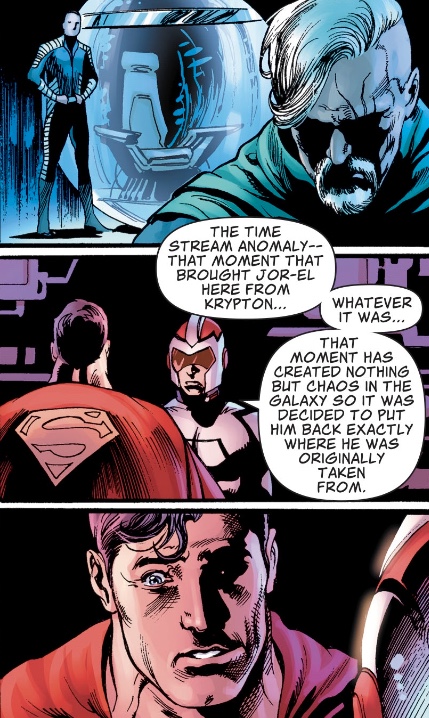 Let’s assume the older Jor-El has some kind of localised time aura that allows him to be in two places at once.

Better still, let’s admit that DC’s laws of time haven’t been consistent since the Bronze Age and just go with it, else we fall down a rabbit hole of questions about why the galactic powers, if they’re so good at targeting moments in time, don’t just prevent Krypton’s destruction in the first place.

For example, why not stop Jor-El creating Rogol Zaar?

Jor-El created Rogol Zaar? This is new… or is my memory shot? After all his appearances in Superman and Supergirl I’m still not sure who this creature is. In Supergirl, a Guardian of the Universe told the Maid of Steel Zaar was the last of his race, blamed Krypton and wanted revenge. Last month in this comic Zaar was affected by Green K radiation, Superman concluded that the murderer was actually Kryptonian and Zaar never contradicted that. And now Adam Strange says he’s seen evidence that Jor-El was responsible for creating Zaar, a ‘genetically enhanced war monster’.

Can someone please explain Zaar’s origin? Because it’s entirely possible that I’m being thick.

The big positive is that the Mr Oz version of Jor-El is gone for, with luck, good, and he goes with a peaceful look on his lately-more-sane face. Less great is that the newborn United Planets’ first act is to execute someone… it’s not like the Phantom Zone isn’t sitting there, with plenty of space. Just think of the ‘How ironic >choke<‘ we could have had from Jor-El winding up trapped in his own prison.

Then again, I fundamentally don’t like one of Superman’s birth parents having survived Krypton’s end, so I should just be happy he’s gone from the timeline.

The conversation between Superman and Adam Strange is really well done, Superman asking if Adam’s people are OK, then arguing on behalf of the father who has done truly terrible things. Bendis excels when writing about family relationships, something we also see in the story’s delightful closing splash.

He’s also great at Supergirl, incredulous that Phantom Zone escapee Zod is free to start a new world… presumably the UP chiefs have granted a pardon for his part in ending the threat of Zaar. I do like Bendis’ presentation of Zod as a man who’s learned that he’s taken the wrong path all these years.

As for Zaar, we last see him in some kind of stasis state – surely if Jor-El’s acts merit execution, Zaar should be dealt with in a similar manner? Just do something, before the Psions on the UP grab some genetic material and make a batch of mini-Zaars.

And Superman? I think he just gave himself a new job. 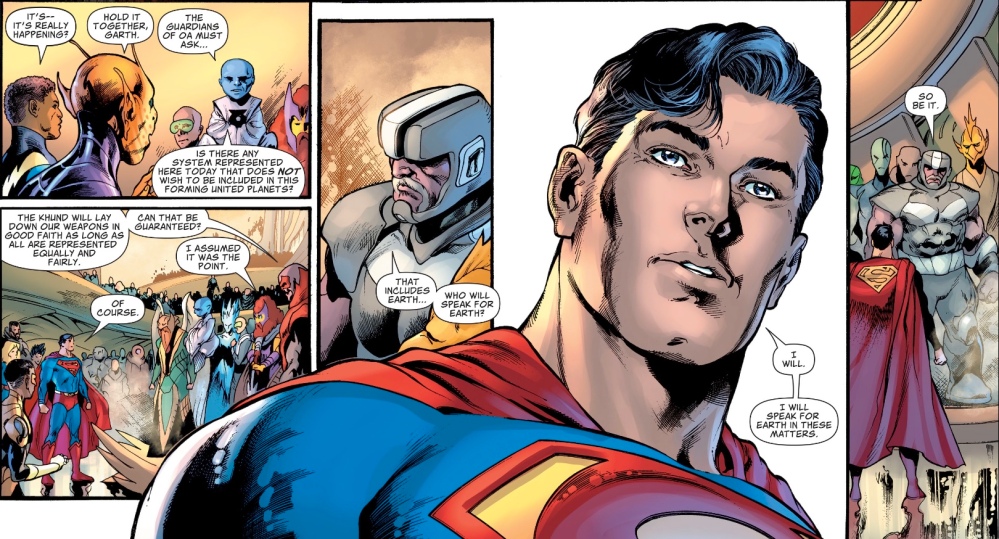 Regular penciler Ivan Reis and inkers Oclair Albert and Joe Prado do a terrific job throughout, keeping the storytelling not just legible, but stylish, while dealing with dozens of characters, including the newly minted, incredibly excitable Legion. They also provide that cover I like so much. Brandon Peterson and Evan ‘Doc’ Shaner also contribute a page each… usually I look for some behind-the-scenes reason as to why this would be the case, but this is a 23pp story rather than the usual 20-22pp, so it’s likely just generosity of page count. Both extra artists do a fine job, with Peterson showing us Krypton’s end in intimate detail, while Shaner gets the macro image, compete with tot-sized rocket ship. The whole book is coloured by Alex Sinclair and he does himself proud, keeping things super-bright for the formation of the UP and moodier for the Superman and Adam Strange sequences.

That great opening splash, featuring a rather out-of-sorts Zaar, reproduced up top – the motif calls back to the opening circular images in Bendis’ Man of Steel mini-series… and am I imagining the positioning of the figure gives us a yin and yang vibe? Probably not, the notion hardly suits Zaar. 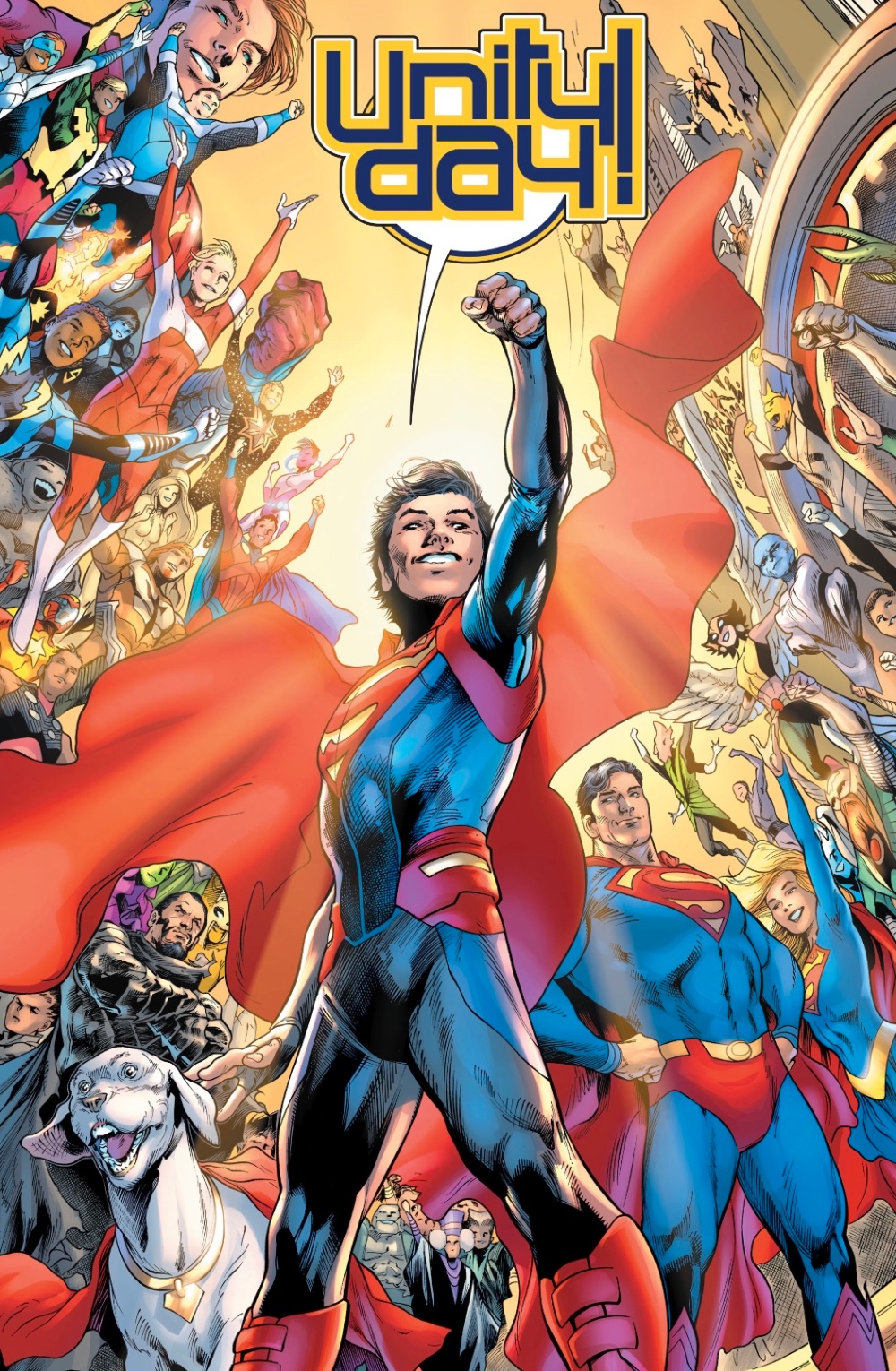 My favourite page? It could never be anything but this – Bendis and friends have brought back the optimistic Legion of Super-Heroes I was raised on, and the artists convey this in spades. Just look at Krypto, there’s no way he isn’t wondering how soon he can spin off the Legion of Super-Pets.

And a big thanks, also, to Dave Sharpe, for his letters throughout, especially the use of the new Legion logo font here.

Superman #15 ties up some loose ends, sets up new things for the future, entertained and excited me – who could ask for more than that in a comic