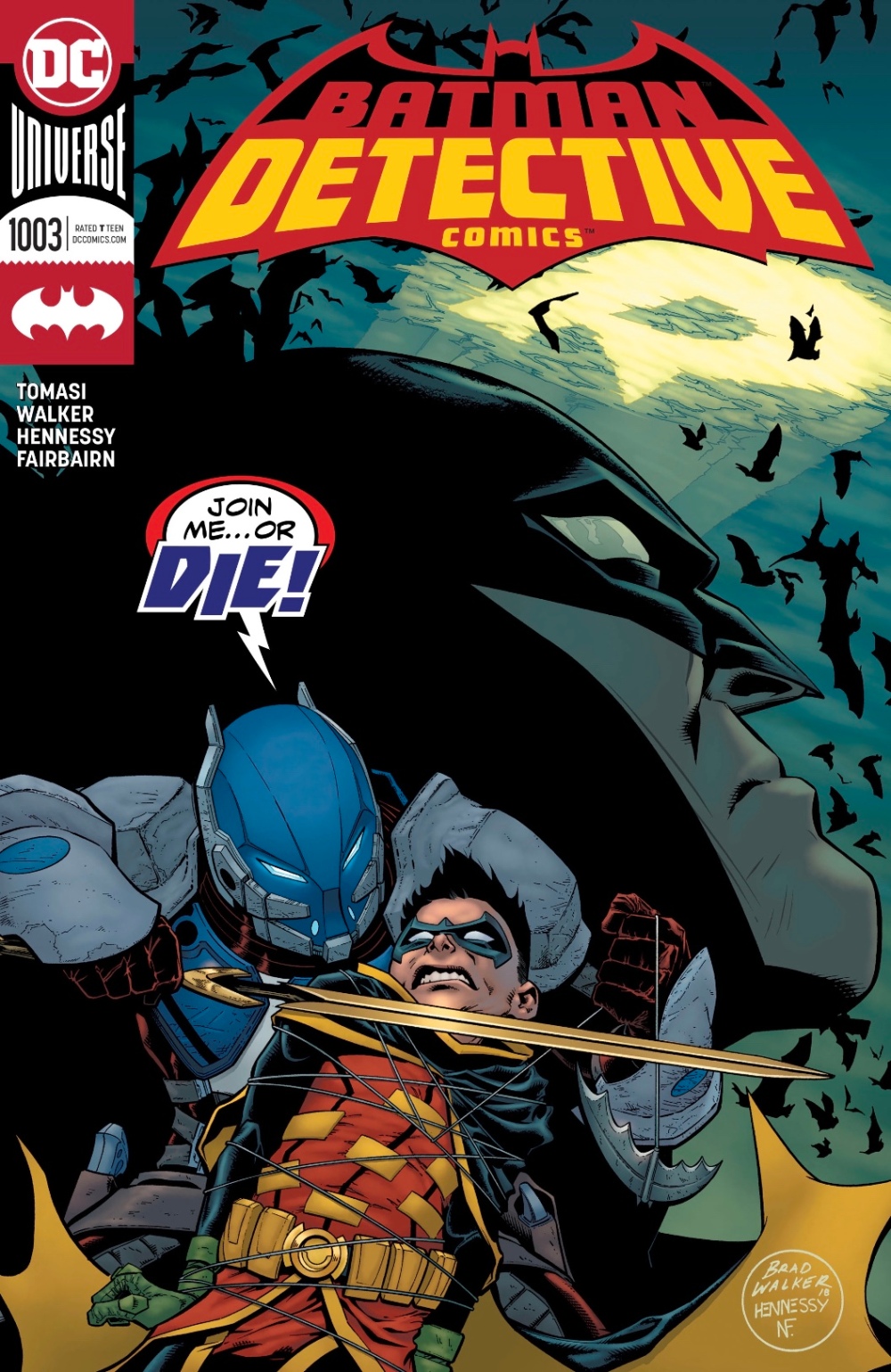 ‘Atomic batteries to power and gyro-sphere to ignition.’

Now there’s a line that will resonate with longtime fans, updating the Batman TV series’s dialogue signalling the Batmobile was about to hit the road. Mind, it’s not a car Batman and Robin are taking for a spin, it’s a new version of the Bat-Gyro, that Golden Age favourite.

The current Detective Comics storyline feels very ‘today’ while providing a side helping of nostalgia. A terrific surprise is that new writer Peter J Tomasi has snuck Damian Wayne into proceedings, giving us an honest-to-goodness Batman and Robin teaming. It’s been a while, and the cracking result has me wondering why more writers don’t go this route. Maybe they’re afraid they won’t write Damian as well as Tomasi who, having used him in the old Batman & Robin book and more recent Super Sons series, has probably written more stories with him by now than creator Grant Morrison. Tomasi took the original little psycho and, little by little, mellowed him as he’s been exposed to other members of the Batman Family (including a dog and a cow). Damian is still likely to default to ‘cocky snot’ in combat, but his better angels are much more to the fore these days.

This issue begins with Damian in trouble. Gotham has been hit by a bomb ignited by a new baddie wearing medieval-style armour. While gathering shrapnel in Aparo Bay to examine for clues, the latest Robin has been captured. He’s not exactly afraid.

After a short fight with the woman’s goons, Damian is allowed to go free as a goodwill gesture – she hopes the move will help persuade the Teen Titan to return and willingly join her in ridding Gotham of what she believes is the scourge that is Batman. Damian is soon reunited with his father. 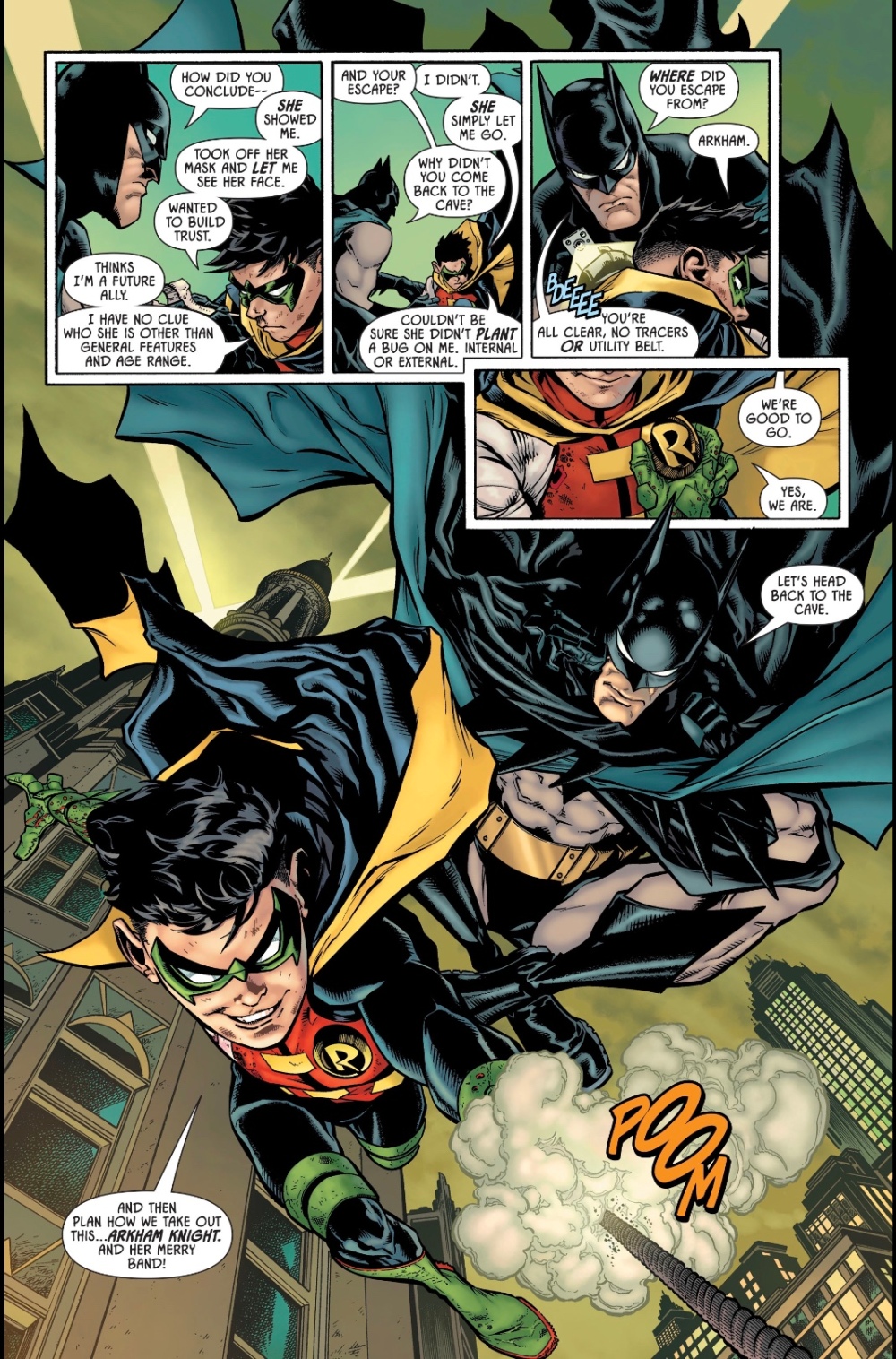 There’s a lot more that happens but if you’re not already buying, hopefully you’ll give this issue a try. We’re three issues into the story of the Arkham Knight – as Damian dubs their antagonist – but you could easily hop on board here. Do so and you’ll get crisp dialogue from Tomasi that propels the story forward with style, and juicy art courtesy of penciller Brad Walker, inker Andrew Hennessy and colourist Nathan Fairbairn. The chapter is chock-full of great character moments, plot twists and action, and it all looks amazing.

I admit I groaned at the news that yet another secret cabal was coming to the fore in Gotham, but Tomasi, Walker and co bring real freshness to what’s become a Batman cliche. This series is just pure enjoyment, with a Batman who’s grim, yes, but far from the utter nutter of the sister Batman series – here we have a Bruce Wayne for whom human interaction isn’t the worst thing that could happen to him. This Batman not only remembers he has a son, he actually seems to enjoy fatherhood.

Obviously, Damian hasn’t quite progressed far enough to be appalled at absent mother Talia’s approach to education… I wonder if the named art teacher is someone who taught Walker. I do hope not.

I love the expressiveness of Walker and Hennessy’s characters, and the Dynamic Duo look superb in costume too (we even get a closer-than-usual look at how the pieces fit together as our heroes prepare for a night on the town). Walker’s approach to Batman’s cowl is particularly intriguing – it’s like no one else’s – tougher looking, the more slanted eyepieces giving Batman a Mephistophelean glint.

And could I have a Bat-Gyro please?

A few words of praise, too, to letterer Rob Leigh who, like Tomasi, has moved over to Batman Country from Superman Land and continued to up his game. The lettering throughout looks splendid, and the title font is for the ages. And well done to editors Molly Mahan and Dave Wielgosz for talent wrangling and general production goodness.

The one thing I would change about this story is its link to Arkham Asylum, which is once again proven to be the DC Universe’s least-secure unit – imagine a revolving door hanging off its hinges.

I like the cover by the interior artists which, like last issue’s, just flat out fibs in that grand comic tradition.

Delightfully entertaining, unselfconsciously stylish, Detective Comics #1003 is a great chapter in what looks set to be a classic run.