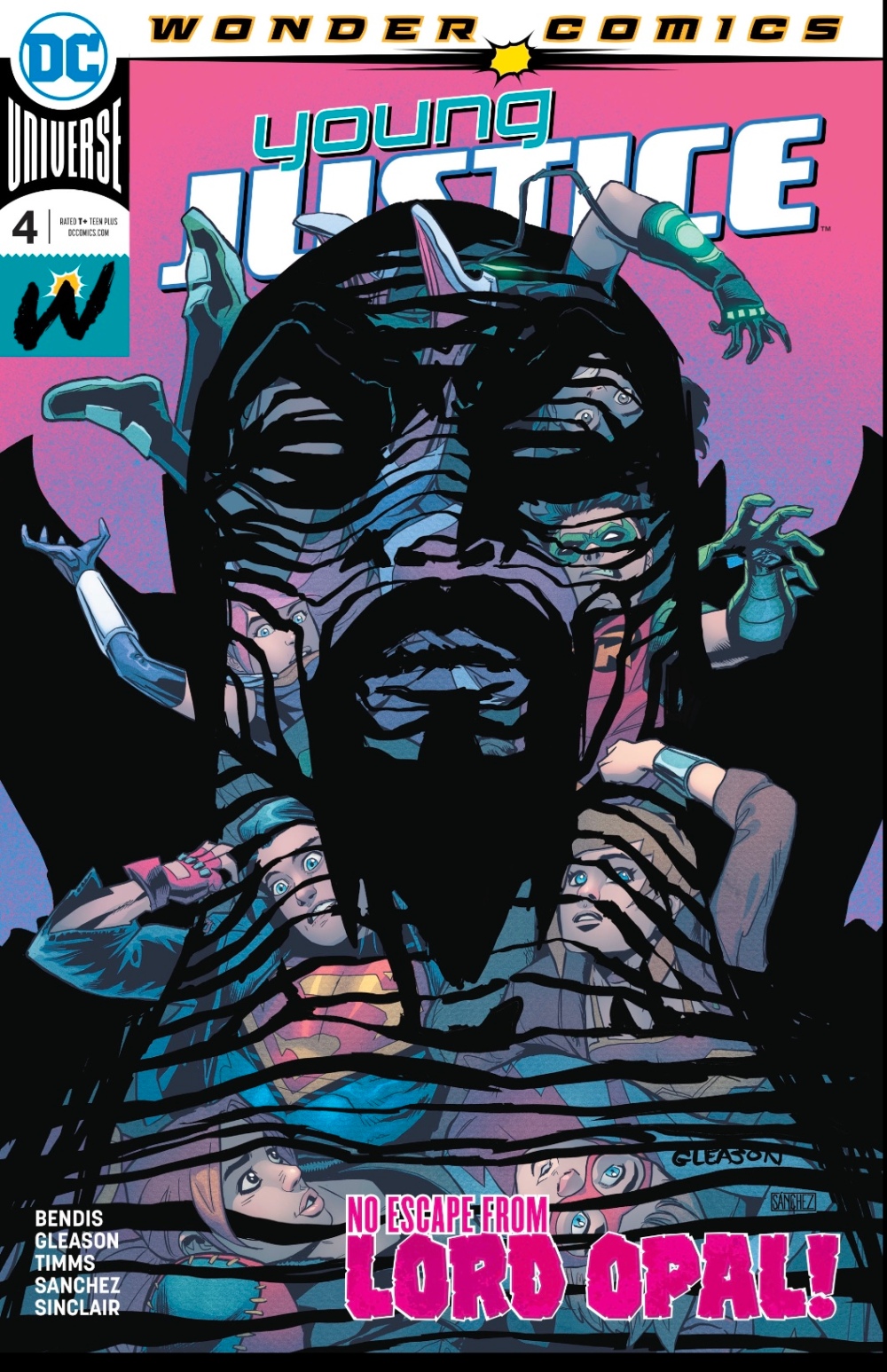 In the Gemworld dungeons, the trapped teens loosely united by the Young Justice name are trying to come up with a way out. Unfortunately, the magic employed by Dark Lord Opal is befuddling their minds… they just can’t get their act together. To make use of the time, Amethyst, Princess of Gemworld, tells them of recent events in the magical realm.

She’s been entreating the members of the Genworld parliament to take strong action against the absent Opal.

The other representatives, even her friend Turquoise, won’t listen, causing Amy to flounce out in understandable frustration. Outside, though, she hears Turquoise speak up for her.

In the present, Impulse – the one hero who wasn’t captured – wants to know what old friend Superboy is doing on Gemworld.

Conner Kent has gone native, got himself a wife and child, and is strangely reluctant to stand up to the soldiers of Opal, who have been terrorising the locals. Bart Allen’s super-speed spirit, though, wakes up something in Conner and, finally, he fights back.

And other things happen. In the flashback, in the present day… it’s all great stuff. If you like superheroes and DC, and you’re not buying this book, do yourself a favour and catch up. The title of the arc is Seven Crises, which should intrigue longstanding DCU fans; it seems that every time those pesky Earth heroes face a multiversal threat – sometimes of their own making – Gemworld changes. The Gemworld folk, understandably, aren’t happy, so they sent a rather heavy-handed diplomatic mission to Earth, looking for the person they consider the planet’s champion, Superman. He wasn’t in Metropolis, but Wonder Girl, Robin and several other teen heroes were, and they all wound up on Gemworld. We’ve been watching the action, while catching up on backstories, in these first few issues, and this time the focus is – as you might have worked out – on Amethyst.

Brian Bendis has a good feel for the courtly intrigue, and I like his spirited Amy. This little speech is a highlight of an all-round excellent issue. 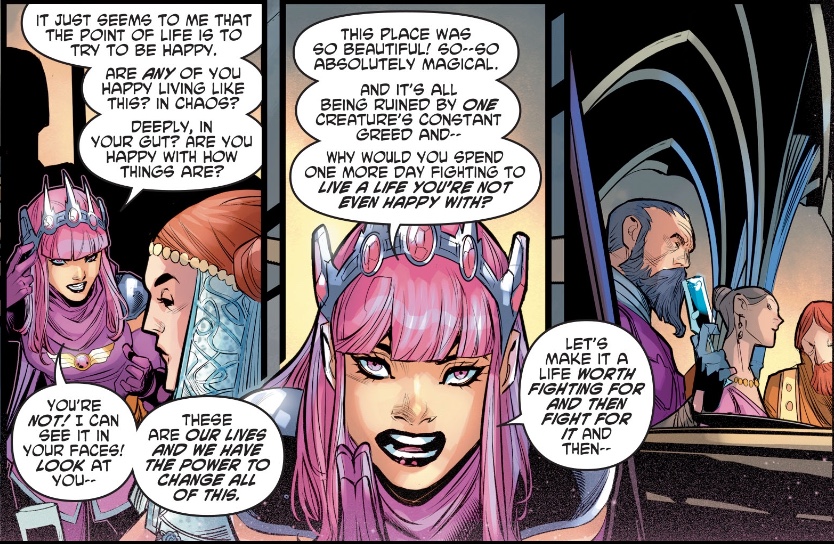 There’s also a tiny reference to Krypton which seems to tie into the Rogol Zaar business in Bendis’s Superman books.

It’s evident the reality rewrites brought by each Crisis tweak geography and architecture – maybe the people are slightly altered too, explaining why the heads of the royal houses are so wet and our girl Amy now has purple hair as Amethyst.

Have I mentioned that I prefer her as a blonde? Purple hair is far too on the nose for a gal going by ‘Amethyst’. Still, it’s wonderful that one of the best characters to debut in the Eighties has a regular home again, and having the first story of the reborn Young Justice take place in her territory knits her into the book nicely.

Most of the other characters take a back seat, with only Bart and Conner sharing the spotlight, and Bendis does a bang-up job on both. I particularly like Bart’s line here, which may be speaking to time passing differently on Gemworld, but I took to be a wink at the reader as regards the experience of serialised fiction. 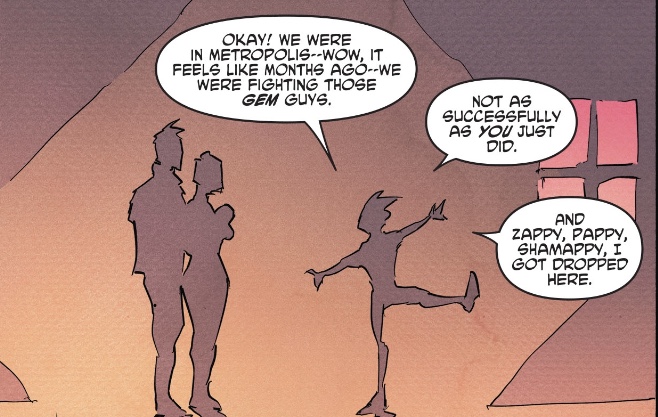 The art is especially stunning this month. Regular artist Patrick Gleason does the ‘today’ pages with colourist Alejandro Sanchez, while Harley Quinn regular John Timms and colourist Alex Sinclair give us the flashbacks. While the Gleason pages are a tad grittier, Timms’ sequences don’t jar, keeping the sensibility Gleason and friends have established. The emotions of Amethyst are excellently captured, and Gemworld looks suitably fantastic – just look at the Cathedral-like parliamentary chamber – while Gleason excels at portraying the Superboy/Impulse friendship and produces an action splash that screams ‘instant classic’. Oh, and while we’ve not seen much of new character Teen Lantern to date, Gleason makes her adorable. Speaking of whom, I don’t remember this explanation for her powers.

Did I miss it previously? Whatever the case, it’s great, and I look forward to seeing who the Guardians of the Universe send to yell at her when they find out. G’nort would be g’nice

Every page is a winner, from Dark Opal’s castle at the start to the final page, which loops back to an earlier issue. The two artists are on spectacular form, helped by vibrant, intelligent colouring and the fact Bendis gives them so many wonderful things to illustrate. Letterer Wes Abbott also does a fine job, using italics, bold and differing font sizes to emphasise dialogue points.

Gleason and Sanchez’s cover is interestingly freaky, but I prefer the castle as seen on the first page, evocative of Dark Lord Opal without the imposition of his actual features.

Speaking of the evil overlord, he’s always been ‘Dark Opal’ but on the cover he’s ‘Lord Opal and inside it’s ‘Dark Lord Opal’… can we just stick with the traditional name, it’s perfect? Similarly, a couple of times Gemworld is referred to as ‘The Gem’? One caption even says: ‘Elsewhere in the Gem’ – is Gemworld now a precious stone? Is everyone tiny?

Minor things… this is a terrific issue of a series that looks set to be a real favourite. Dig into your amethysts, opals or spangly sequins, and buy the thing.