To best enjoy the current Justice League run, it’s best not to sweat the big stuff. Moon blown up? Just go with it. Everyone on earth transformed into sea monsters? It happens. If things don’t make sense at the time, they’re generally clarified an issue or two later. I’m not so keen on outright cheats, though. This was the climax of last issue’s chapter of Drowned Earth, which sees the World’s Greatest Superheroes battling a bunch of sea gods from outer space. 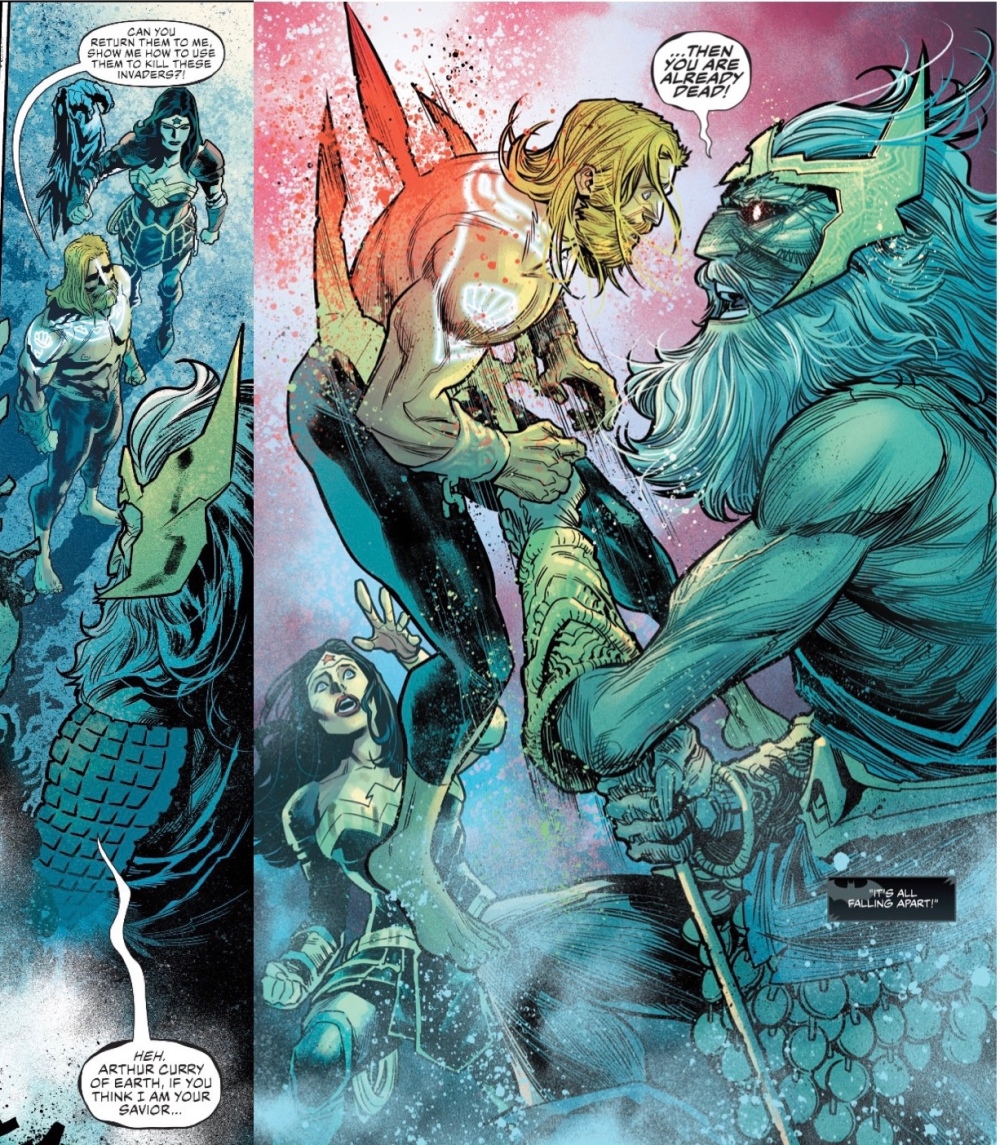 Poseidon, to whom Wonder Woman and Aquaman had gone for help, is all-out evil? Here’s how that plotline was picked up in this week’s issue.

Oh come on! You can do better that that, James Tynion IV!

The rest of the issue is better, bar the odd clunky line of dialogue (‘…the awesome might of their power’) and the decision to have Batman swearing – leave that to the baddies, huh? Oh, and Flash witters away like a moron, or rather, a teenage speedster on the big screen.

Tynion skilfully picks up the baton laid down by regular writer Scott Snyder and runs with it, progressing the Drowned Earth storyline nicely. We get an expansion of the background to this storyline – Arion, Lord of Atlantis, was duped by the Olympian sea god into betraying the friendly water gods he’d summoned to Earth.

Now, thousands of years later, the space-born sea deities have escaped their prison, the Graveyard of the Gods, and are mightily annoyed. Understandably.

Back at the Hall of Justice, it’s Batman vs the Legion of Doom, who have come for the Totality, a piece of the Source Wall being guarded by the Justice League.

And at the Tomb of Arion, Mera, Flash and Pirate Superman are fighting Black Manta and the sea gods.

It’s a fun issue, thanks to such moments as Mera creating a sword with her hard water powers (‘aquakinesis’ my arse) and Batman rocking a Luthor war suit. Poseidon remains untrustworthy, he’s obviously dying to coerce Aquaman into killing the sea gods so he can pinch their power. There’s a nice scene showing just how rubbish the Legion of Doom are at getting along, and it’s a total treat to see Arion and Eighties series co-stars Lady Chian and Wynnde In flashback.

What I suspect I’ll remember most, though, is the artwork. About a third is crisply illustrated by Bruno Redondo with sterling colours by Sunny Gho, and I like it a lot. Redondo has a real knack for getting character into his villains, and he does a fantastic Bat-mask.

The rest of the book is the work of Frazer (not ‘Frasier’, kids!) Irving, fully illustrated art that takes this book into the realm of high fantasy. It’s truly gorgeous, of a quality that once upon a time would have been reserved for a graphic novel.

Actually, why isn’t Irving producing DC graphic novels? Someone is missing a trick there.

The regular cover by artist Jorge Jimenez and colourist Alejandro Sanchez is a classic concept, smartly executed, while the Aquaman movie variant by Lucio Parrillo is probably being bought by Jason Mamoa even now…. that is impressive!

Drowned Earth – for no obvious reason an Aquaman/Justice League crossover as opposed to a simple JL story featuring regular member Aquaman and recent addition Mera – ends in an upcoming special. Is a return to glory by Arion too much to hope for?