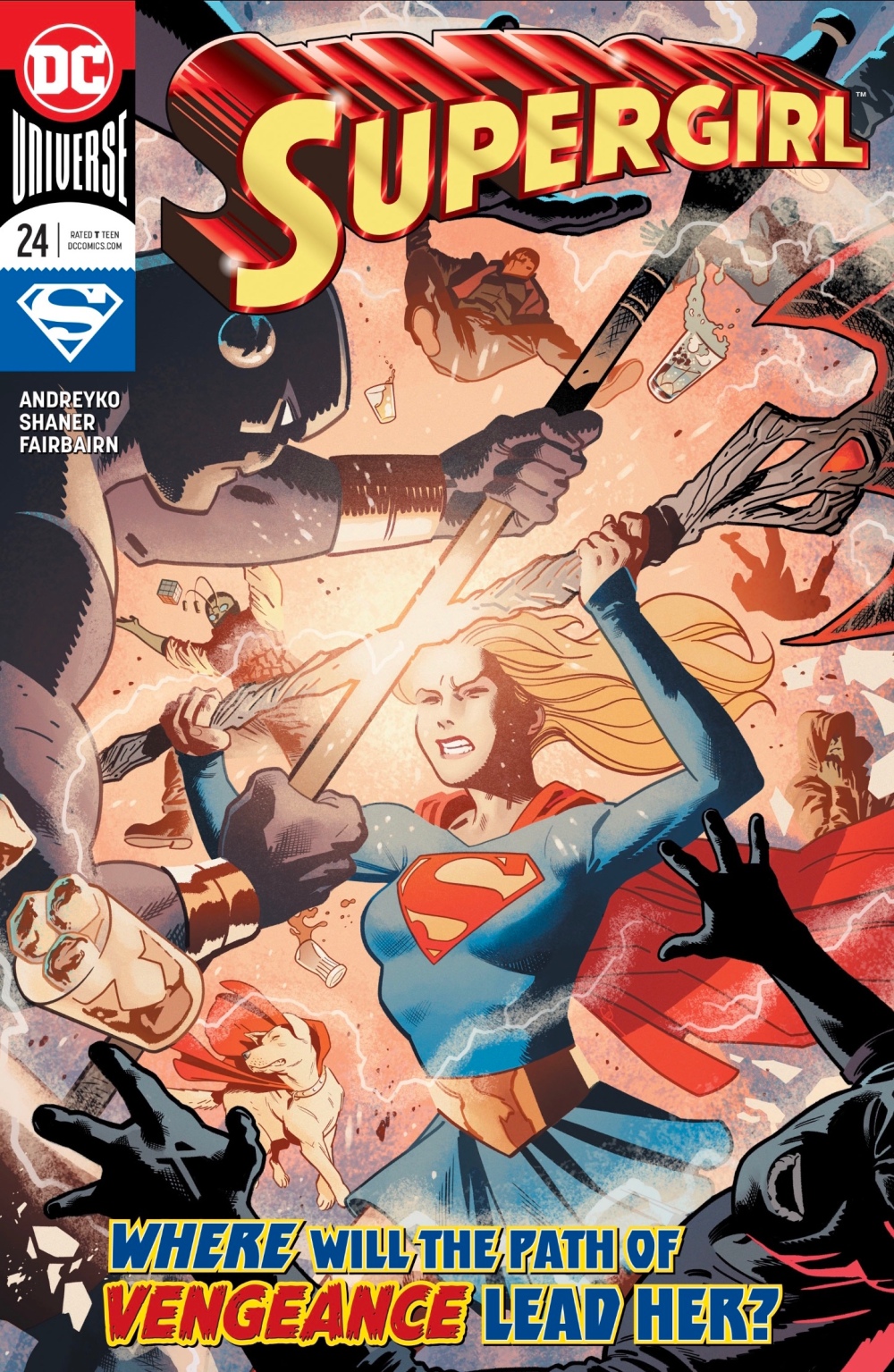 Supergirl is in the far reaches of space, desperate to track down the truth about the last days of Krypton. A Guardian of the Universe has told her the monstrous Rogol Zaar, the man who claimed to have murdered her home planet, was part of a conspiracy. Now she wants to find the other members of The Circle and get some answers. First stop, the space dive known as Taffey’s West.

Nearby, the spy tasked with following her by Circle member Gandelo, prepares to enter the bar.

No one wants to talk to her about Zaar – he’s either feared, or respected – but Kara has her ways.

Soon, a bar brawl breaks out, and Kara gets unexpected help from one of the patrons.

Unfortunately for Supergirl, the one alien who was about to give her information is murdered by the barwoman, blasted to smithereens.

Kara isn’t exactly glowing with gratitude when the bearded green chap introduces himself as Z’ndr Kol, she’s frustrated and annoyed that’s her lead has turned to dust. Under the dead alien’s clothes, though, she finds a Kryptonian memory crystal – a new lead.

Kol follows her from the bar and, with just a few sentences of story, convinces her to let him accompany her. 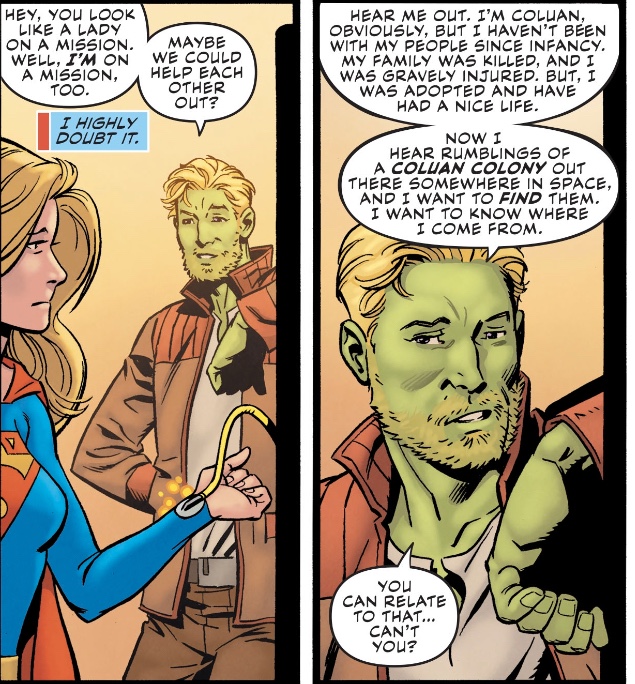 I guess Kara’s super-senses only tell her someone is lying if she knows to switch them on because unless writer Marc Andreyko is deliberately misleading us, Kol (I’m not typing stupid names with stupid apostrophes if I can help it) isn’t so much a Coluan as a Fifth Coluanist. He’s the spy Gandelo has following her. I’m guessing he’s the guy at far left below, whom we see in the bar prior to Kol making himself known and then never again.

A Durlan wearing the offworld form popularised by Chameleon Boy of the Legion of Super-Heroes. When we saw the character we know is the spy earlier, he wore robes, another signature Durlan look. He fights alongside Kara to gain her trust, tells her a story that chimes with her own origin to seem sympathetic… and who better to engage in interstellar spycraft than a shapeshifter. Too obvious?

I liked this issue a lot, as Kara’s quest moves forward little by little, with every step entertaining. Krypto the super dog continues to be a delight, Kara uses Kryptonian martial arts that date to the Silver and Modern Ages, she very cleverly recharges her fading solar energies and as for that scene with her showing her skill with her super senses, it reminded me of a classic Supergirl moment from DC Comics Presents #28.

Andreyko’s Kara may be quick to anger, but she still has mastery of the subtle end of her powers.

I like the narration by Kara, with one exception – Kara admitting she’s quicker to use violence that her super-cousin. No, she isn’t.

This issue regular artist Kevin Maguire takes a break so Evan ‘Doc’ Shaner comes on board, and his visuals, as coloured by Nathan Fairbairn are a delight, with lots of fine facial expressions and body language and loads of aliens DCU aliens from the likes of Legion, L.E.G.I.O.N., Green Lantern and the Omega Men. We even get a cameo, sort of, from the Martian Manhunter’s interdimensional pal Zook. Shaner must have hit a deadline crunch, mind, as one of comics’ finest inkers – and best writers – Karl Kesey pops up to finish one of his pages, and fully illustrate another. I can’t see the joins.

Add in a most intriguing cliffhanger and this is my favourite issue yet of the current storyline.

The regular cover is by Shaner and I like it; shame about the cover copy, though – I like Kara seeking answers, but revenge? Not one bit.

As for the variant from artist Amanda Conner and colourist Paul Mounts, it’s utterly delicious – has ever a dog looked more sheepish?

Supergirl continues to be a superb read month in, month out. The plot is thickening nicely, the art looks great whoever is drawing and I look forward to Kara finding out the truth about Krytpon’s demise. And if it’s that this Rogol Zaar story is a big old pile of space pants, excellent!