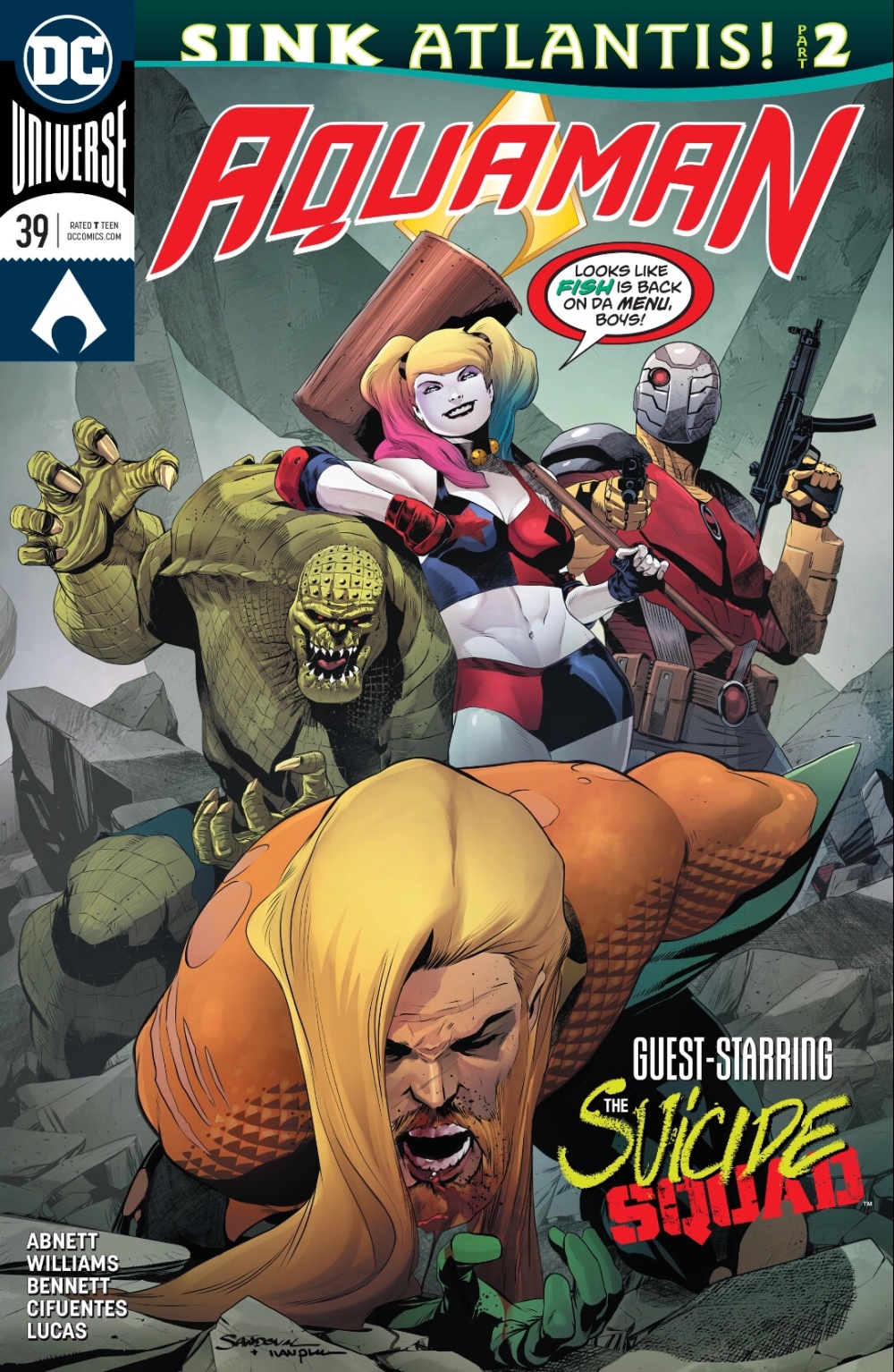 Atlantis has been raised from the sea, a subconscious wish by Aquaman acted on by magical metal. The surface world is deeply suspicious and Amanda Waller has sent the Suicide Squad to bomb Atlantis back under the water. And if some people die…

…actually, despite being criminals, not all the Squad members – specifically Harley Quinn and Deadshot – are OK with this plan. They’d been led to believe it would be a simple case of repositioning via the magic of Lord Satanus. But the payload the old Superman foe is carrying is a ‘mystically enhanced thermonuclear device’.

Meanwhile, in the former undersea city, Mera has been crowned queen, and while she wants to keep the United Nations calm, it’s not her main priority.

As for Aquaman, he’s not stupid.

Writer Dan Abnett is off this series soon and I’m not thrilled; issues as strong as this – which is pretty much all of them – show he’s nowhere near spent with the characters. There’s Aquaman, stoic and statesmanlike despite having given up the throne. Mera, learning on the job, the quickest of studies. The Atlantean supporting cast of Murk, Odine, Dolphin and the rest. And when there are guest stars to be served, well, he writes the Suicide Squad as if he’s been their handler for years.

I especially like how he captures the imperiousness of Lord Satanus, the caution of Master Jailer and the particular quirks of regulars Harley, Croc and Deadshot.

Mind, the ‘Satin Anus’ insult he and Suicide Squad writer Rob Williams have come up with is being done to death in this short crossover between the two series (the two Brits are co-plotting, and scripting their ‘home books’).

The guest team of penciller Joe Bennett and inker Vicente Cifuentes bring this book to beautiful life, with characters looking majestic, evil and just plain monstrous as  required. Bennett’s panels layouts have a real energy to them while the internal compositions are tip-top. How’s this for dramatic foreshortening? 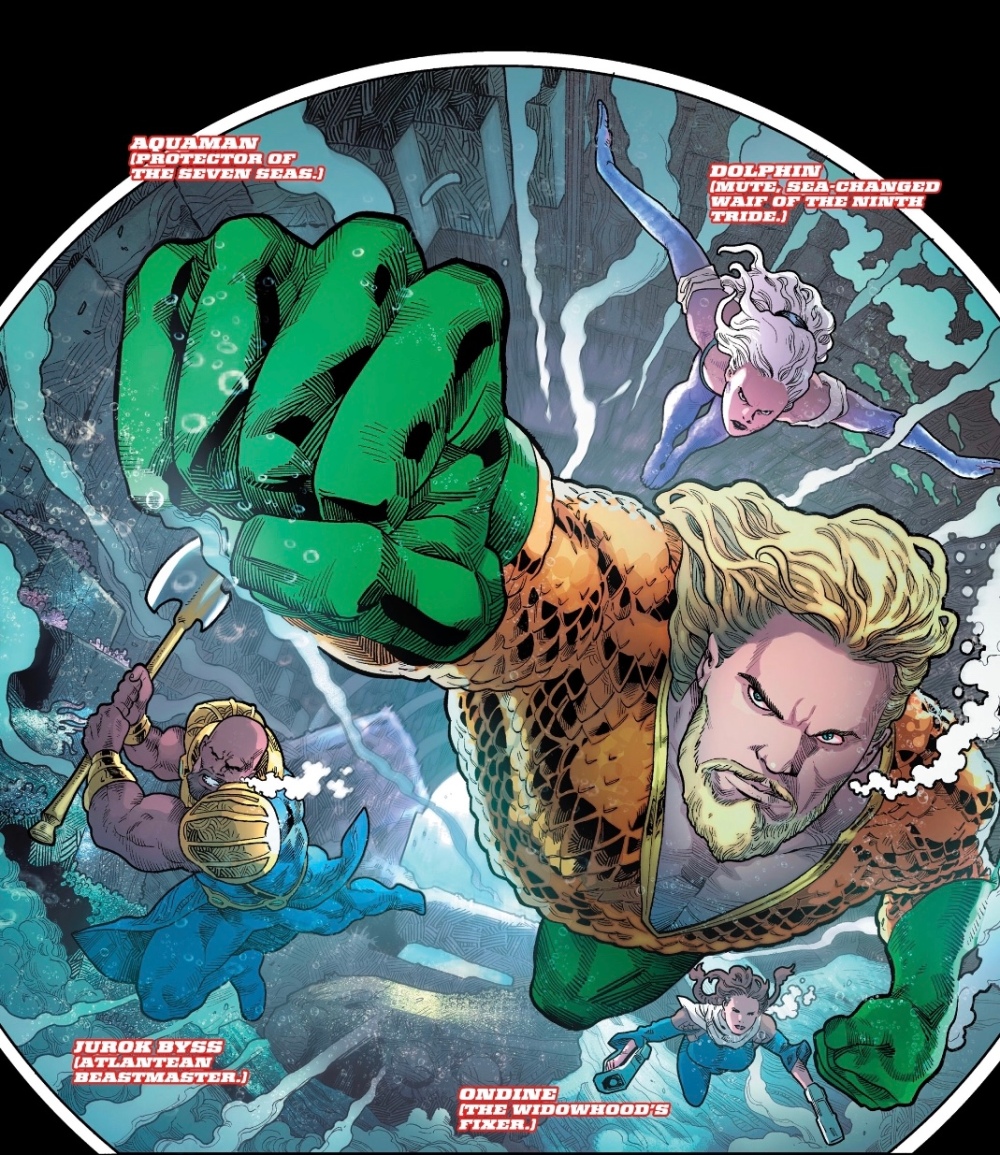 There’s a nice subtle touch in the splash page as we see one member of Atlantis’s advisory Widowhood with a traditional scroll, the other with a tablet. And how cute is that wee panicking chap trying to escape the bottom panel on the Harley vs Satanus page?

Cifuentes’ finishes and sharp and stylish, while Adriano Lucas lays down some glorious colours – one thing he does which is new to me is show some water sticking to the scales of Arthur’s scaled chest plate – it’s a nice touch.

Letterer Steve Wands has made this book his own with confident, character-appropriate work, and his scene-setting display font will be missed if the next artist doesn’t keep it up. 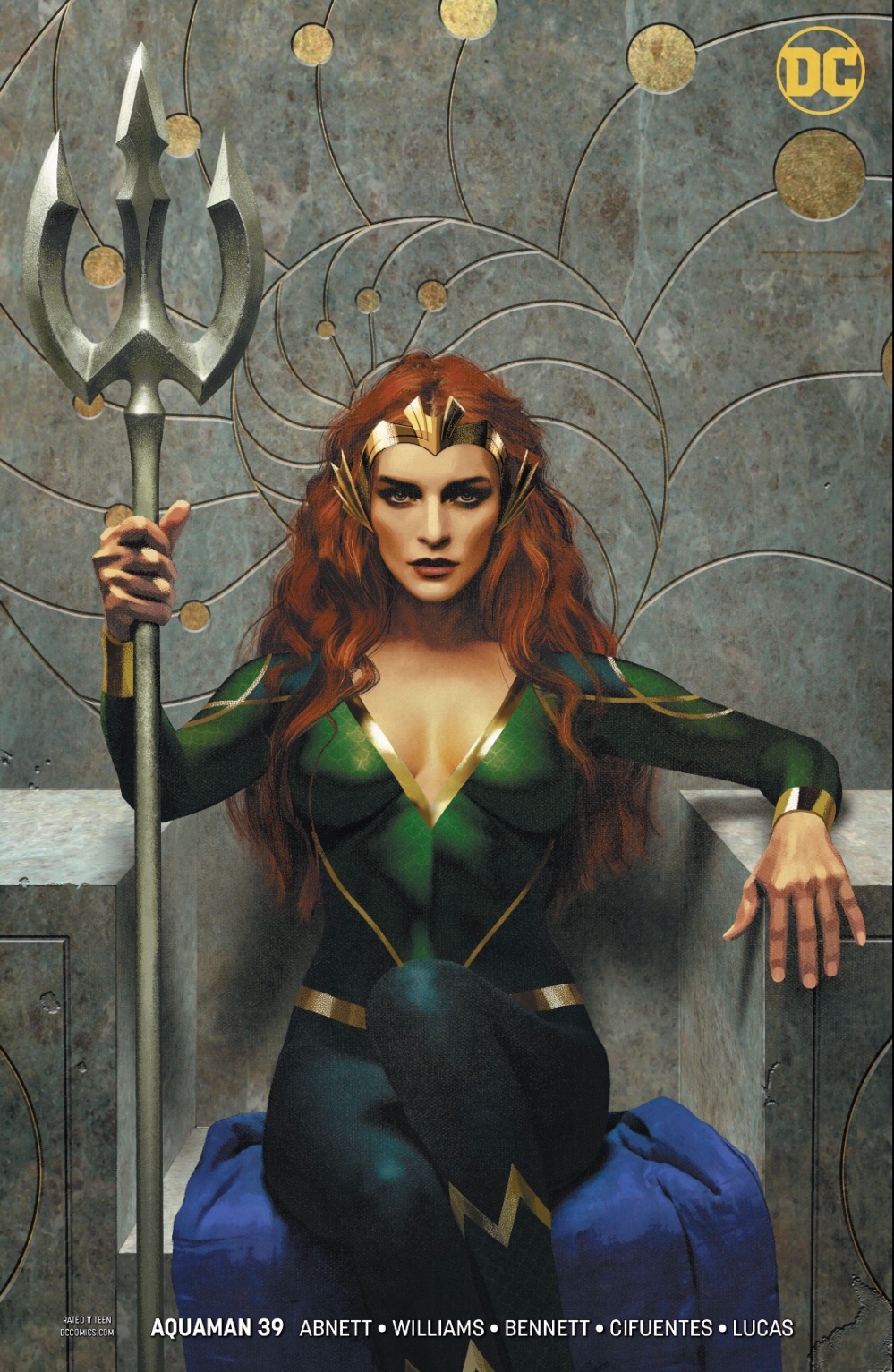 A superb issue from start-to-finish, Aquaman #39 deserves to be widely read and praised.