The original X-Men are going home. Or being killed. Maybe they’re going to be absorbed into their elder selves (as the older Cyclops is currently dead, that could be interesting!). I don’t know. All I know is that this mini-series aims to clean house, get rid of the X-Men brought from the past to the present by Beast/Bendis in time for a line-wide relaunch.

Before we catch up with them, a flashforward to 2038 where a ragged figure is unhappy. 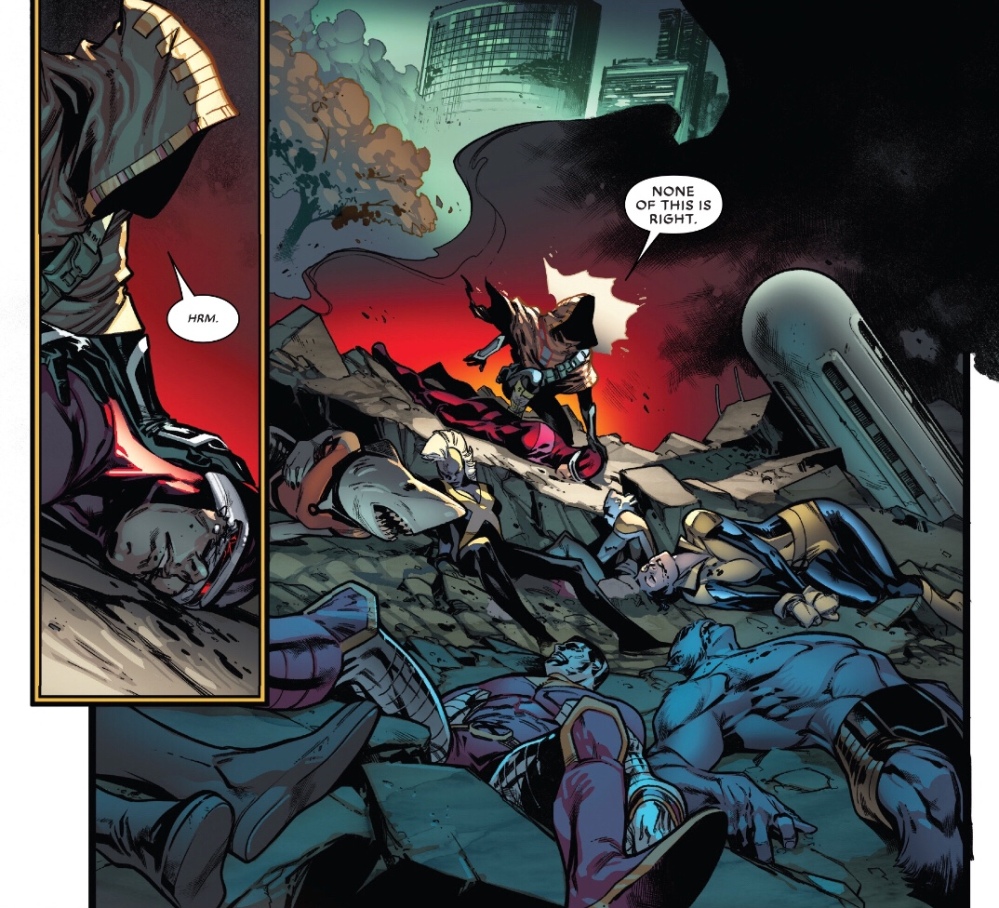 Today, the young X-Men save a pair of scared mutant children from a hate-filled mob in Chicago.

Ah, the young X-Men and a vampire version of Storm from some continuity or other. The kids take the younger kids to the X-Mansion for safety; the bairns have no memory of who they are or where they come from, though their French accents may serve as a clue. Leaving them in the hands of medic Dr Cecilia Reyes, the teenage mutants go about their business. For two of them, it’s a date.

Then it’s a team-up. 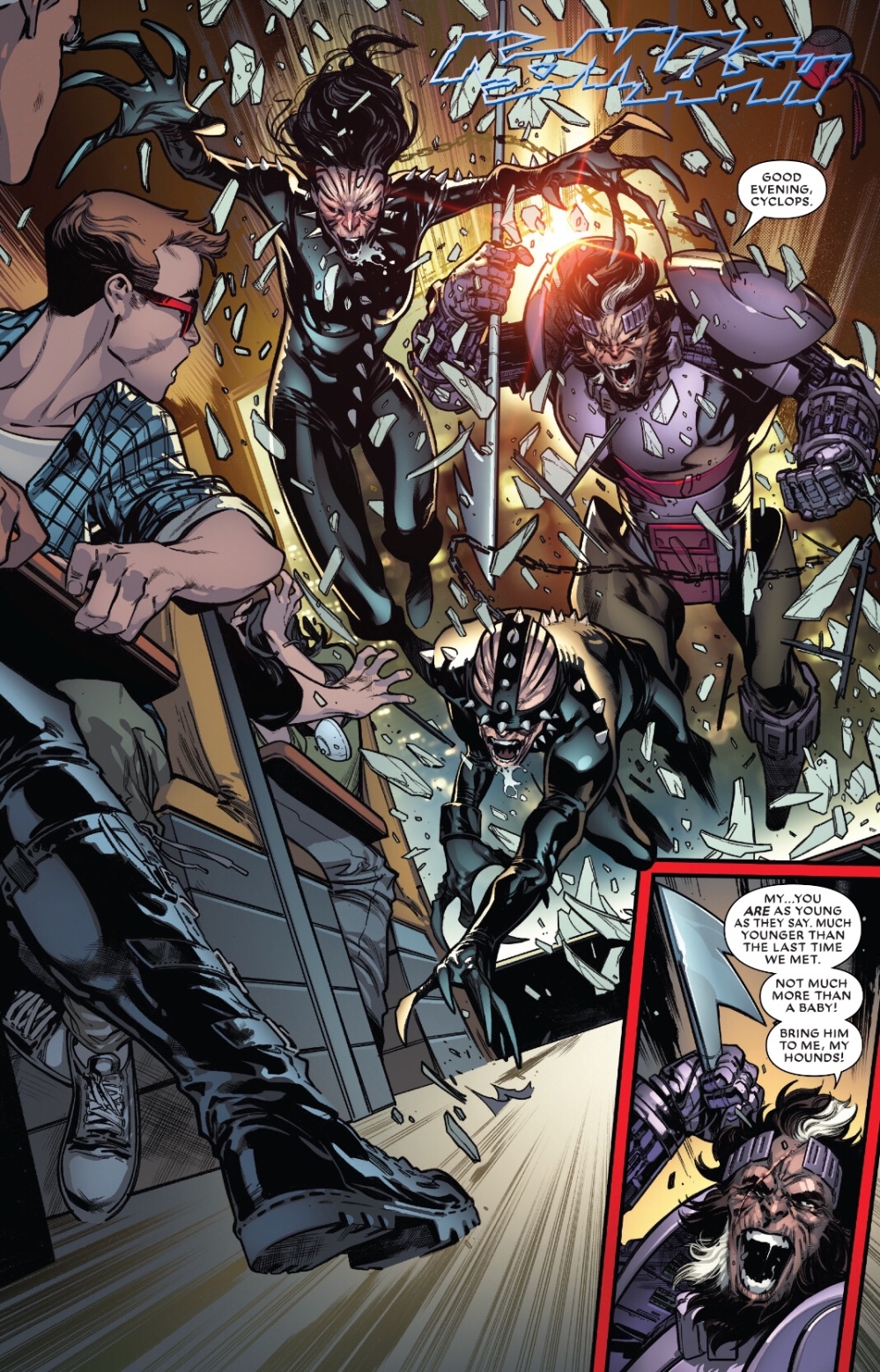 Neither this Cyclops nor Bloodstorm have fought Ahab, master of the mutant hounds from –  all together now – a future dystopia, previously. One of them doesn’t survive the experience.

What’s that? Bloodstorm, you say? Wow, do you have mutant powers of intuition? Who could foresee the tag-along member being the first out of the series? Anyway , Ahab gets away, alarmed by the power of a fightin’ mad Cyclops. Scott tells Jean what’s happened and she sends out a telepathic summons to Iceman who, because he’s now gay, is watching a musical.

Outside the theatre, Bobby is attacked by an unseen assailant. But Cable shows up to lend a hand…

… and gets killed too.

Still, he’s a time traveller, has replaceable cybernetic bits and is in an X-Men comic book – he’ll be back.

I’m taking the Mickey a little bit, but I actually enjoyed this issue lots. Sure, it’s packed to the brim with things we’ve seen before – dark days ahead, time travelling mutant hunters, deaths that will have been reversed by the time I finish typing this. But writer Ed Brisson keeps things moving at a fair gallop, and he’s terrific at character voices and dynamics; heck, he has me missing the original X-Men already and they’ve not gone yet. At one point Brisson has Kitty Pryde call Rachel Grey ‘Ray’, a nice nostalgic callback to their Excalibur days.

Plus, this is a very pretty book, thanks to illustrator Pepe Larraz and colourist Marte Gracia. Larraz knows how to tell a story, his individual images meshing into a much greater whole. I especially like his Cyclops, this is Scott Summers at his Claremont and Byrne best. 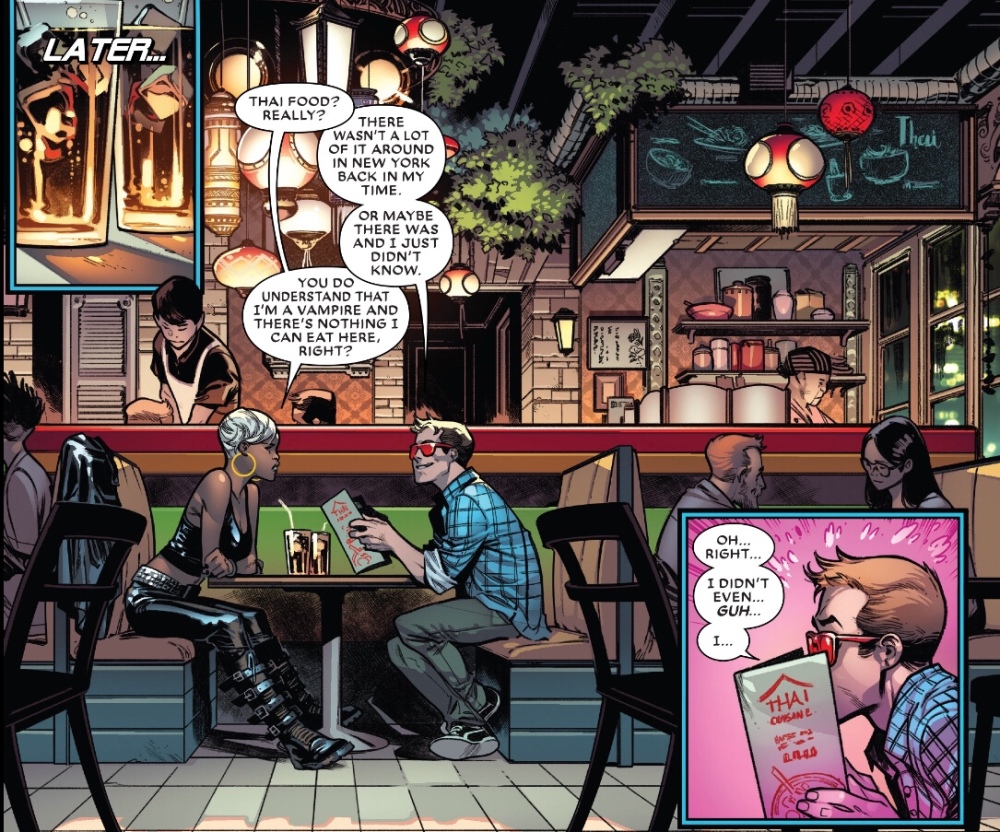 And just look at the work Larraz put into the diner scene, all that detail, and Scott’s blushing moment is sweetly emphasised by Garcia’s pink background. Notice Ororo and Scott’s legs under the table, they’re sitting like two actual individuals, like recognisable humans – this isn’t an artist simply going through the motions.

When the action comes, the panels layout becomes more dynamic, and Larraz really sells the frenetic movements of Cyke, flailing on the ground even as he let’s rip.

Letterer Joe Sabino does good work throughout; he’s not required to provide any showy fonts, meaning everything is beautifully clear.

And how about that cover from Mark Brooks – two versions of each character split down the middle by dramatic lightning. Give that man a bonus.

This series looks to be five issues, ending in November… I hope they’re all this good.