In September, as the finger of suspicion turned towards Kate Spencer, I wondered if Leviathan was Mark Shaw, one of the heroes to carry the name ‘Manhunter’ before her. Last month, it really seemed as if he was Leviathan, but I suspected we’d get a final twist This finale reveals that Leviathan is, in fact… 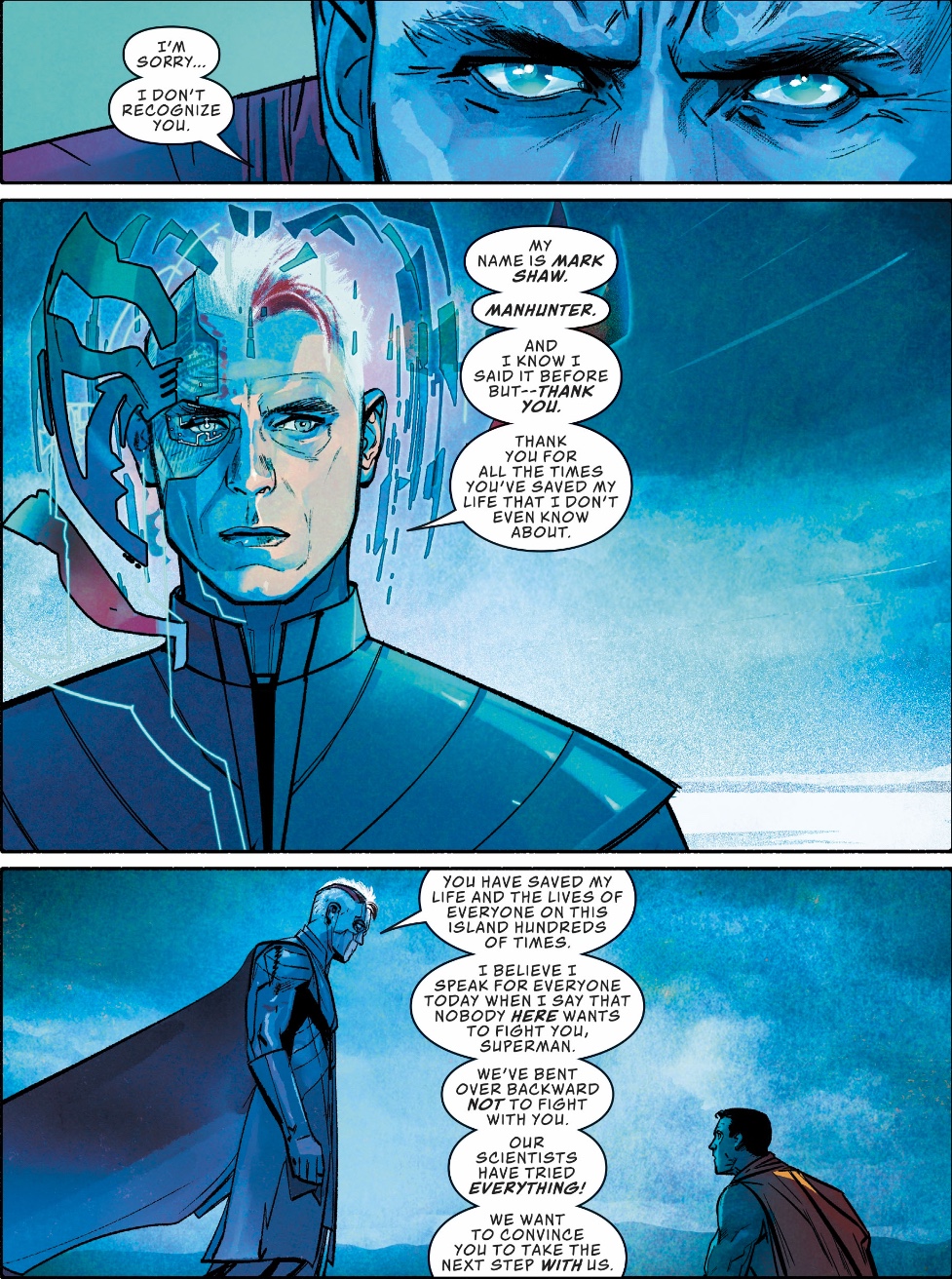 Mark Shaw. No twist. That’s probably a twist in itself. I was hoping it would be one of the actual named suspects this mini-series has thrown at us, but at least writer Brian Michael Bendis provides plausible reasons for his latest identity shift. Because Mark Shaw is a man whose psyche has been fractured many times since his DC debut in the Seventies, constantly manipulated by both evil covert groups and those supposedly on the side of angels.

So Mark Shaw as Manhunter isn’t a bad choice. And I like his new hair.

What else happens this issue bar Superman learning Leviathan’s identity? There’s Talia al-Ghul having a spat with Kate Spencer. 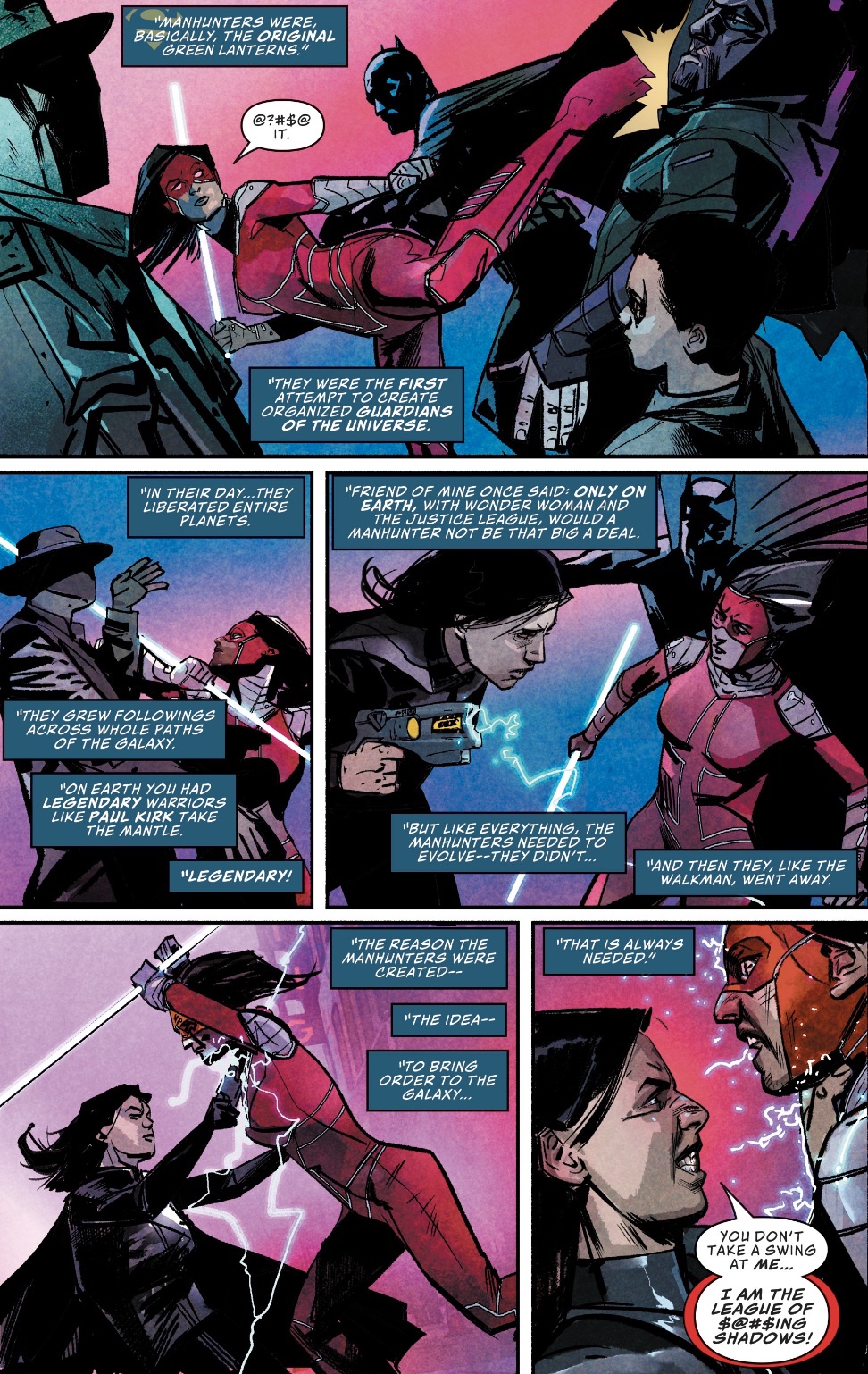 The two teams of detectives arriving on Leviathan Island to, they hope, capture their foe. 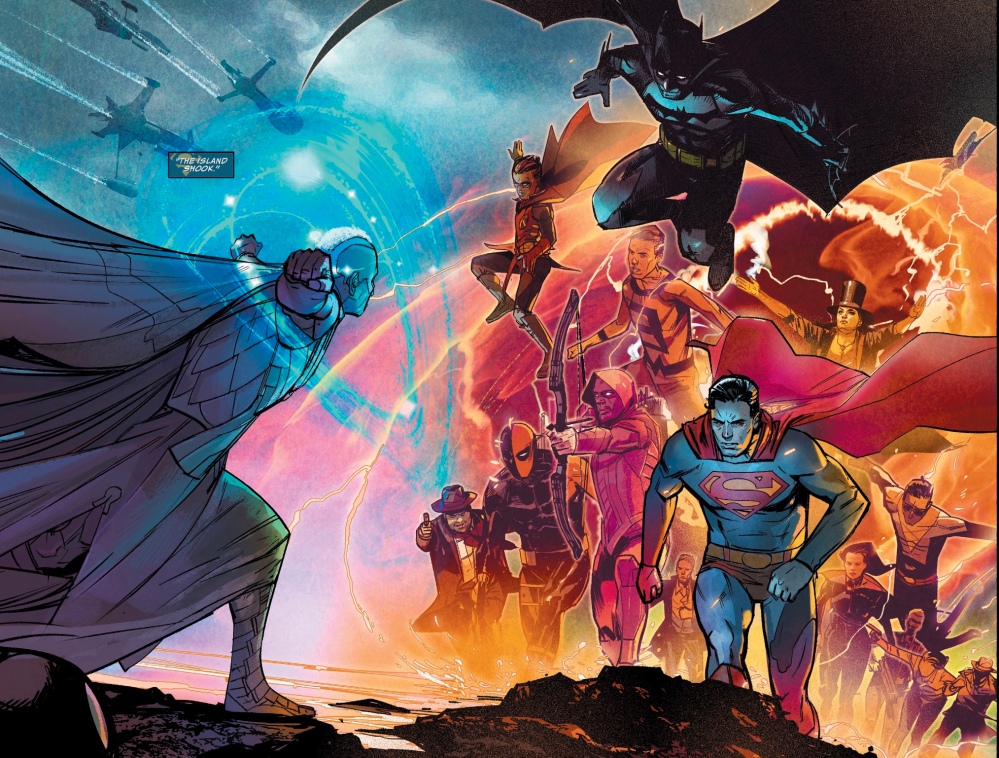 You’ll notice Superman regaling his wife with the history of the Manhunters over the top of the Talia/Kate brouhaha. The obvious conclusion is that these things are happening at the same time, but a caption tells us the fight came three hours before the Superman/Lois meeting. Everything is done and dusted by the opening of the issue.

I suppose I shouldn’t be shocked as this whole story has been flashing back and forth, but I’m surprised by the storytelling choice for the finale; having the big climactic fight set in the recent past takes away from the immediacy, flattens the excitement. This issue should have been set entirely ‘in the moment’ – sure, Bendis’ narrative decision means Superman’s history lesson has an interesting visual backdrop, but actual images of Shaw’s past as Manhunter/Privateer/Star Tsar/Dumas would have underlined his damaged psyche.

Leviathan’s ultimate move, having destroyed the DC spy organisations, was going to be to release all the world’s secrets – in his mind it’s a case of no more secrets, no need for spies. Obviously, that’s a bonkers notion – not all secrets are written down – but who says antagonists have to make sense? The idea did remind me, though, that just a few months back, in the unfortunate (understatement) Heroes in Crisis maxi-series, Lois herself put all the recordings of superheroes sharing their problems at so-called Sanctuary on the internet and… nothing happened. No follow-up. Now, it’s HiC writer Tom King who should have done something with that massive move, Bendis is blameless, but Leviathan’s plan underlined the fact that the whole sorry business, a massive bomb dropped in the DCU, has been ignored.

While the mystery aspect didn’t land for me, I’ve enjoyed the Event Leviathan ride hugely. It’s been a fast-paced action thriller that’s had me guessing, and discussing, from start to finish. And as is often the case with Bendis scripts, it’s the little moments that have me grinning – Harvey Bullock’s backchat to Deathstroke; Talia’s inability to get through a single sentence without sounding like a    particularly  melodramatic   Bond baddie; Batgirl’s insouciance around the idea of being targeted by Leviathan.

I also like that Bendis sees the potential in Silencer from DC’s New Age of Heroes launch, putting her alongside some of comics’ biggest names.

And the full-colour art by Alex Maleev has been simply beautiful, seeing him draw this pack of heroes here has been a total treat. I hope he drops by the DCU often from now on. The compositions and finishes have been utterly additive to Bendis’ script, and as for the colour, the pages have simply glowed with goodness. From the sunlit warehouse to the gloomy coast of Iceland, the tones have been brilliantly chosen and laid down.

The nearest I have to a complaint about the visuals is the mysterious disappearing chest symbol.

Letterer Josh Reed deserves praise, too, for doing a splendid job of getting Bendis’ absorbing script down on paper.

Leviathan’s story isn’t over, but this chapter is. It’s been eventful.