The second generation of students from Xavier’s School for Gifted Youngsters are back. Anyone dead has been reborn, members who have been away are back with the ‘family’. Karma, Sunspot, Cypher, Wolfsbane, Mirage, Magick… they’re all on the new mutant ‘paradise’ of Krakoa and having a wonderful time. 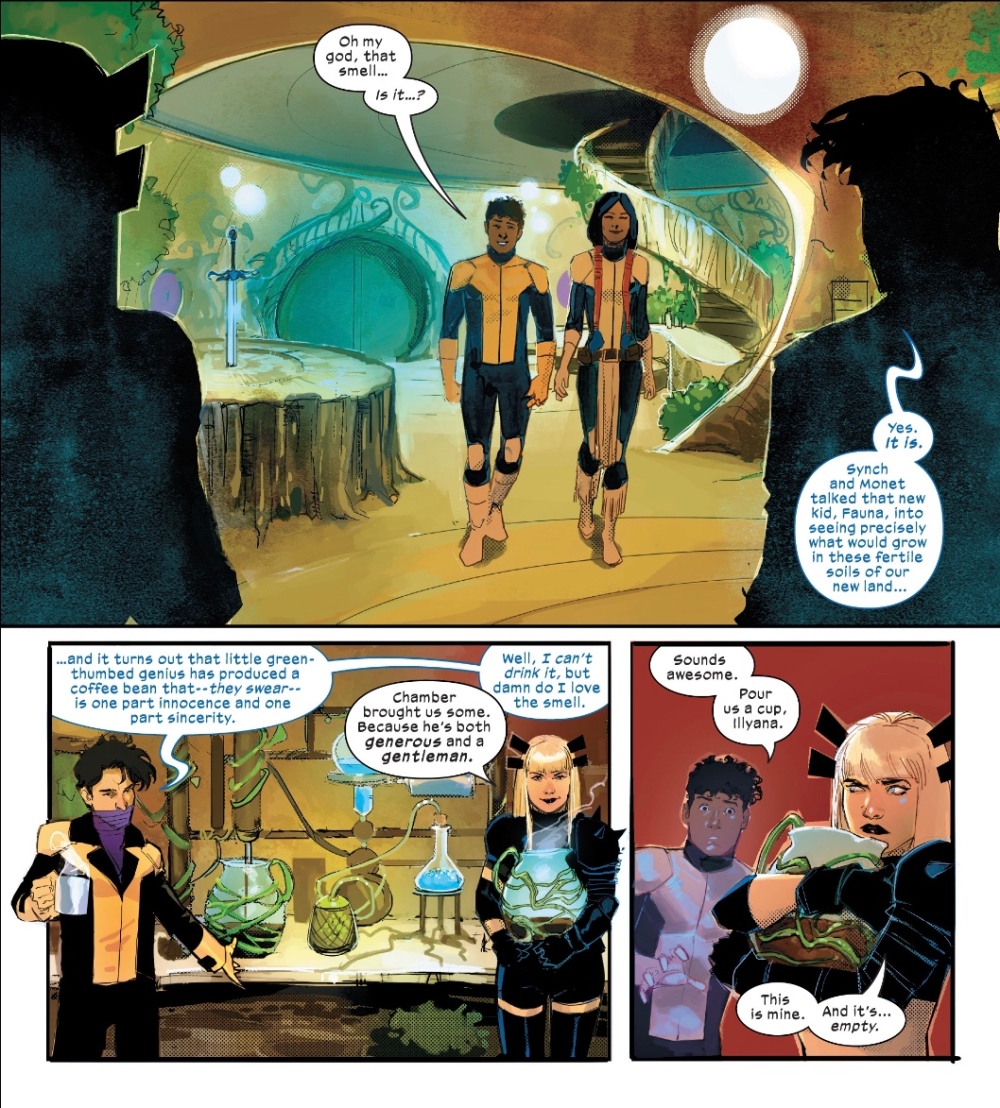 In fact, it’s not just the class nicknamed the New Mutants hanging out, they’re joined by a couple of guys from the next student body down, Chamber and Mondo of Generation X. The latter, who has plant-based powers, has been nagged into trying to communicate with Krakoa by languages savant Cypher, Doug Ramsay.

One original New Mutant, though, is missing. Sam Guthrie, Cannonball, is in outer space. Still, with Krakoa’s special portals, the kids can get off planet; they do, though, need a ride. 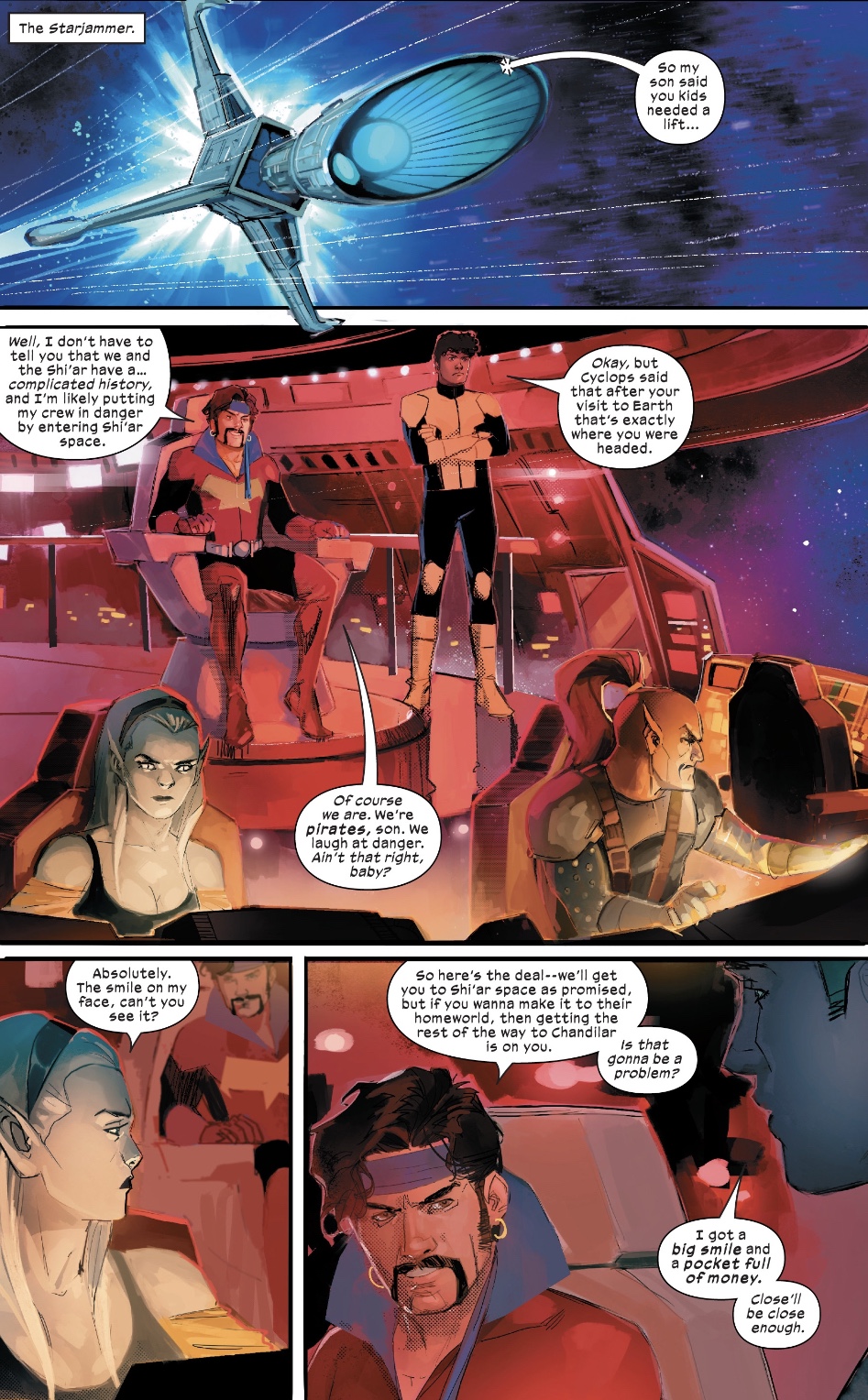 Enter the Starjammers, the cosmic crew lorded over by Cyclops’ dad, Corsair.

Yep, it’s the X-aligned team of space pirates, not seen since, well, X-Men a couple of weeks ago, when they were hanging out on the moon. They’re OK with the kids hitching a ride to get them to the vicinity of Sam, but they do not want the New Mutants getting in the way of their business. Needless to say, that’s exactly what they do do after an amusing scene starring Sunspot, Roberto, who seems to have developed a real taste for liquor.

This book has plenty of heart, thanks to the familiarity of the characters with one another; there’s a lot of affection on display, exemplified by their quest to bring missing pal Sam into the Krakoan ‘fun’. Mind, longtime New Mutant Amora aka Magma doesn’t rate a mention, which is odd as her geophysics-based powers open all sorts of doors, no pun intended, so far as Krakoan interaction is concerned.

I’m not mad keen on super-heroes taking sojourns in space, but so long as they’re out there only long enough to find Sam, great. Meanwhile, their interaction with the Starjammers is far more entertaining than I’d expect – I’ve never been a fan of Marvel’s super-pirates.

And I’m happy that Mondo and Doug are starting to wonder about Krakoa… So it’s a big thumbs up for the script by Ed Brisson and Jonathan Hickman.

As for the art, it’s first-rate Bill Sienkiewicz. Thats surprising, as it’s Rod Reis who’s providing the full colour visuals. Which are gorgeous – expressive, exaggerated, full of character and drama… even the sound effects echo the New Mutants’ classic period under Sienkiewicz and writer Chris Claremont.

And why not? Sienkiewicz, when he first made an impression in the pages of Moon Knight, had a huge Neal Adams flavour. If Reis wants to give us a bit of a Sienkiewicz homage for a while to make old readers feel at home, great – this comic looks spectacular. Like Sienkiewicz, Reis may develop his art into something we can’t imagine. I’m just excited to see someone I know purely as a – rather excellent – colourist at DC show us what else he can do (remember when Andy and Adam Kubert started out as letterers?). And it’s not as if Reis is totally aping the elder artist, his compositions are his own, it’s the rendering and finishes that evoke Sienkiewicz.

Letterer Travis Lanham brings the annoying puppy-downy schoolbook font across from Hickman’s stage-setting HoX/PoX books, but at least he adds interest with the odd dash of colour. And once again we have the Tom Muller-designed text pages, presumably but not necessarily with words by Hickman, I love so very, very muchzzzzzz. Actually, there is an amusing ‘advertisement’ for a froggy space lawyer, which is a start.

Reis provides a spectacular cover, let down only by the, I believe, Hickman-designed logo. I get that he wants the books to share a visual signature, but his angular stylings are more suited to a box of detergent than a superhero comic.

If you’re a fan of the old New Mutants, buy this book. It has most of the characters readers love interacting in a thoroughly enjoyable fashion, and shows off their core heroic natures. Every member has a charming moment, and the overarching Krakoa plotline deepens. And once more, the illustrations of Reis, so gloriously coloured, are beautiful.