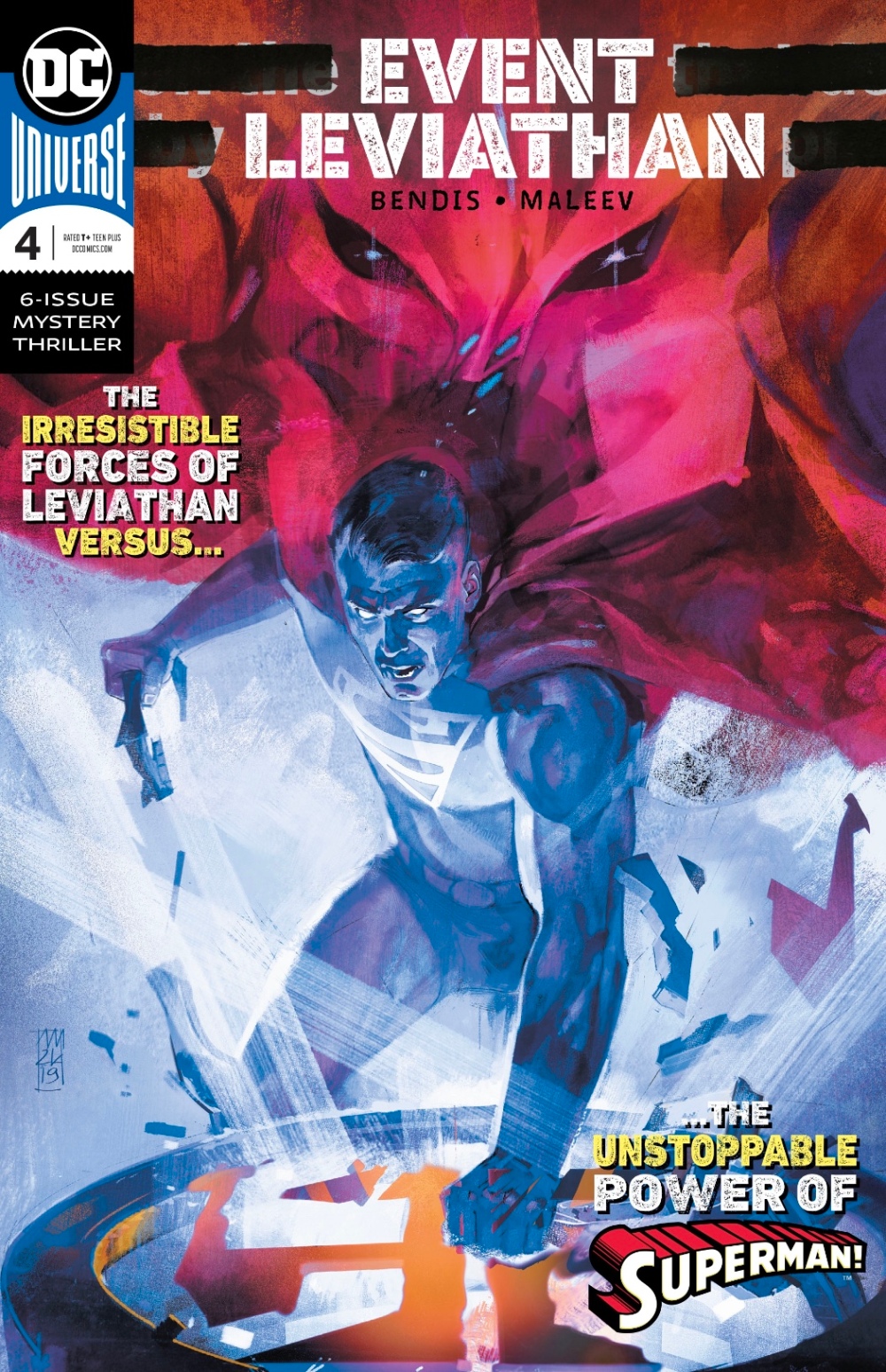 It’s the long night of Leviathan. After the razing of the world’s covert organisations, Superman, Batman and friends believe something bad is coming in the morning. They’ve gathered to pool information in the hope of answering the question: Who is Leviathan?

Leviathan is who made Superman look ineffective as they whisked Task Force X chief Amanda Waller away under his nose.

Leviathan is the master manipulator who has been playing the good guys off against one another.

Leviathan is the paymaster of super-assassin Silencer.

But who is Leviathan?

I dunno. Intriguing ideas aplenty arise from this chapter – superbly written by Brian Michael Bendis, illustrated by Alex Maleev and lettered by Josh Reed – which could have been called Suspicious Minds. Sure, previous issues have told us that everyone suspects everyone else but this one really sells it. The Batcave kitchenette (heh) scene of the detectives chatting away while Lois Lane, Batman and Superman swap intel finally convinces me that, yes, any of them could be part of the Leviathan organisation. 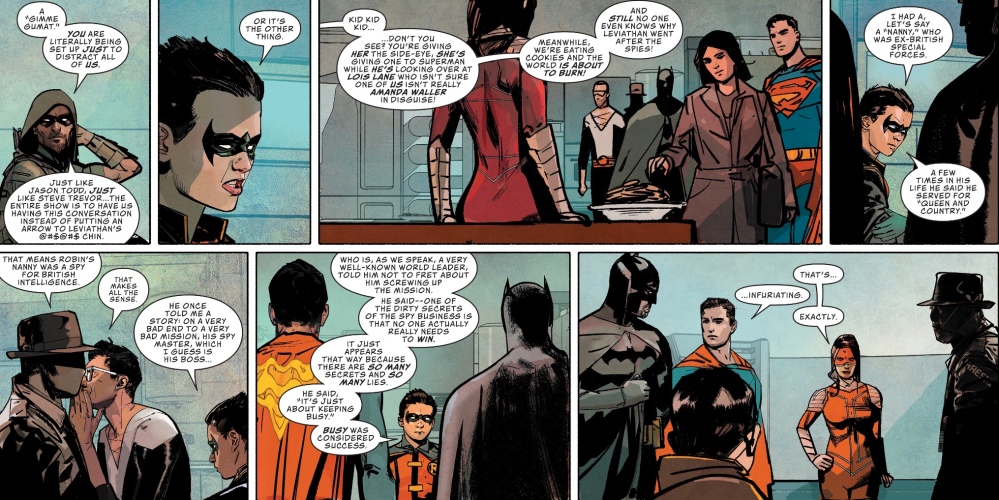 And the Alfred anecdote from Damian shows that he really does have the sharp mind to analyse a case with the likes of the Question and Manhunter.

The final page of this issue does bring in a few more characters who are apparently siding with Leviathan – Zatanna, Harvey Bullock, Deathstroke, the Renee Montoya Question, John Constantine and some guy in Charlie Brown tightly whites whom I don’t recognise. How they might be involved, I have no clue.

So is Leviathan someone connected to Kate Spencer? One of her predecessors as Manhunter, Mark Shaw, appeared in her old mag, he was into spy stuff, and maybe Batgirl is saying his name as interference hits her broadcast here. ‘Mrk’ for ‘Mark’. But she also says something involving ‘Te’ which nods towards Dr Anj’s theory that Leviathan is Ted Kord, the Blue Beetle.

Working against this is that I have no idea how much of Manhunter’s early 2000s continuity survives – after all, around the time Mark Shaw was in the book, she was knee-deep in the aftermath of Ted Kord’s murder by Maxwell Lord.

Then again, Ted is alive in New 52/DC Rebirth continuity and Max Lord never killed him. Or perhaps Max did do the deed, but everyone has forgotten due to the Doomsday Clock shenanigans of Dr Manhattan… it’s ruddy hard to solve a mystery when you don’t know what the state of the DCU and its denizens is.

If I were forced to guess from this issue just who Leviathan is I’d think about which longtime member of the Justice League should rightly have been in the inner circle with Lois, Batman and Superman, but was instead happy to be directing the detectives’ thinking.

Whose voice did Batgirl hear before panicking about just who was in the Batcave with Batman.

Who has sonic weapons that could interfere with a radio signal?

Oliver Queen, for decades, was basically Batman in a tunic; he has the the money, connections and industrial base to organise a network for global change. The killing of his ward, Roy Harper, during a stay at Sanctuary – the supposed safehouse for recovering heroes set up by Superman, Batman and Wonder Woman – could have caused him to lose faith in their ways

Sure, he’s been with the detectives while Leviathan has been appearing, but that could be a representative under there, son Connor Hawke, maybe.

And yes, Green Arrow was with Batgirl when Leviathan tried to recruit her… of course the offer wasn’t made to Ollie, he IS Leviathan. Maybe 😉

I shot an arrow in the air. Am I on target?