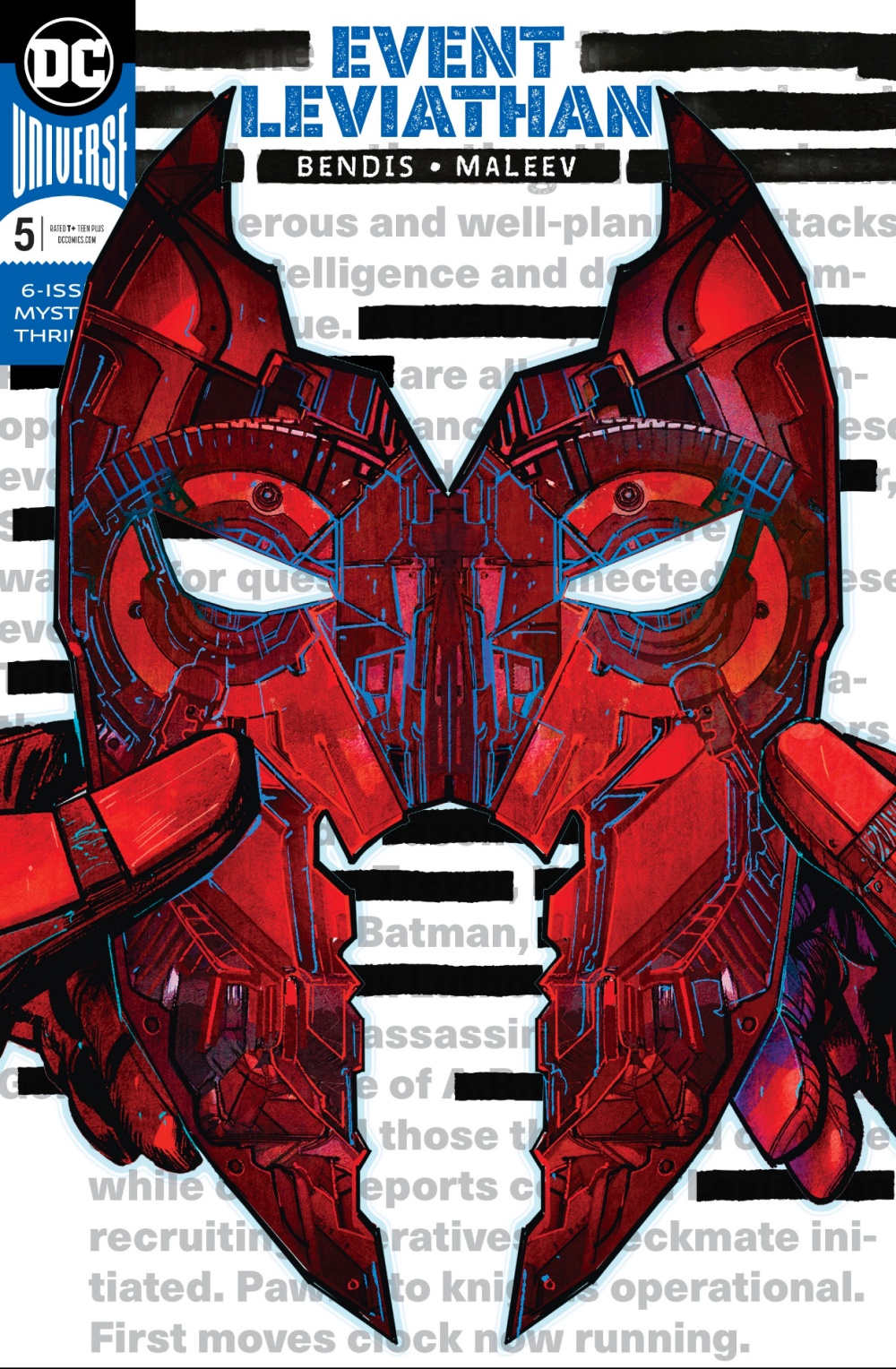 Well, that was exciting. Turning the pages of Event Leviathan #5, I’m trying not to speed through, because while I want to get to the big reveal, I equally want to enjoy the sights the ride offers, see if I can work things out before all is apparent. 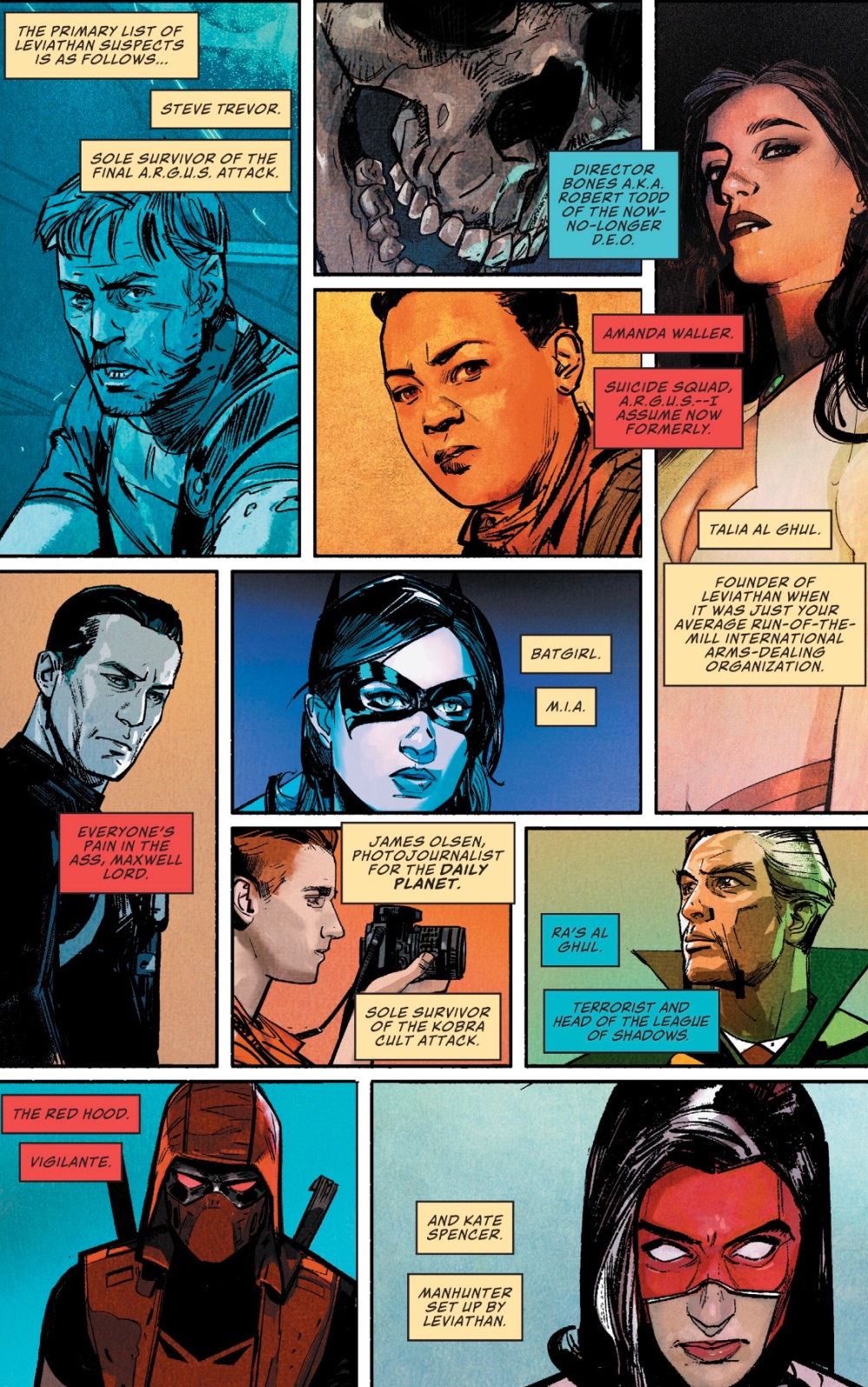 We begin with Lois and her secret team of detectives, who have a handy list of everyone they’ve cleared. They’re convinced that now they know who Leviathan is – despite him being in a hospital bed after an attack by the mystery person/organisation, Zatanna, Elongated Man and friends are sure it’s… General Sam Lane, Lois’s father.

Lois isn’t convinced. And as it turns out, he’s allied to the group, but not the series’ main antagonist. 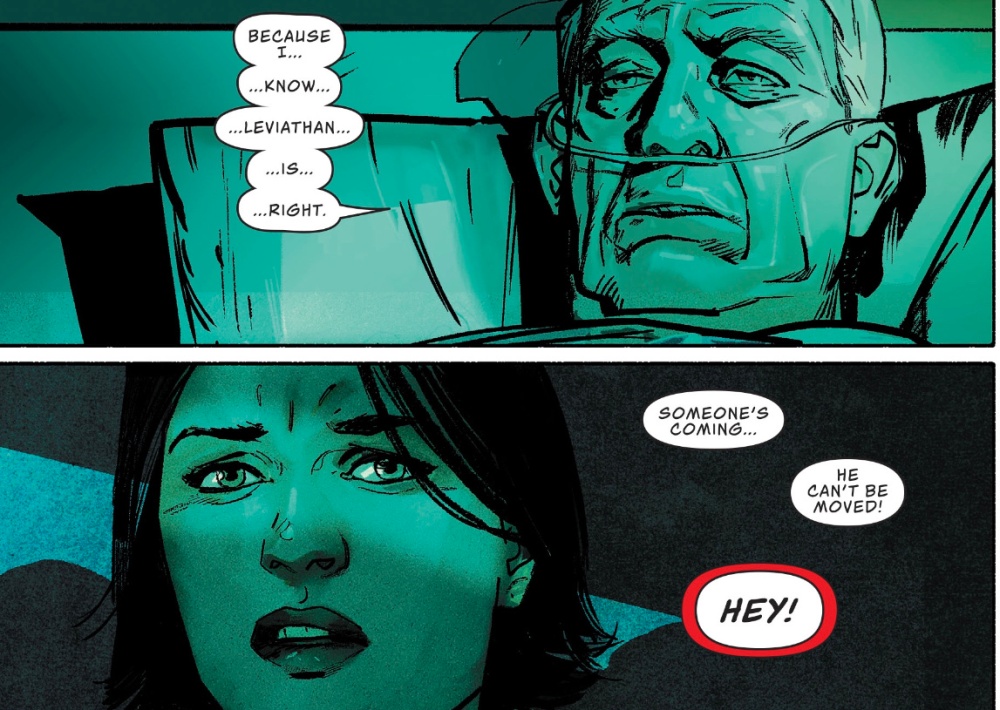 So who is Leviathan?

Leviathan the person tries to convince Superman – whose powers aren’t working due to superspy-tech invented to contain son Jon – to stand aside as they impose world peace. Batman and his team of detectives, meanwhile, are still trying to work out who Leviathan is. Damian Wayne has a slow creep Eureka moment. 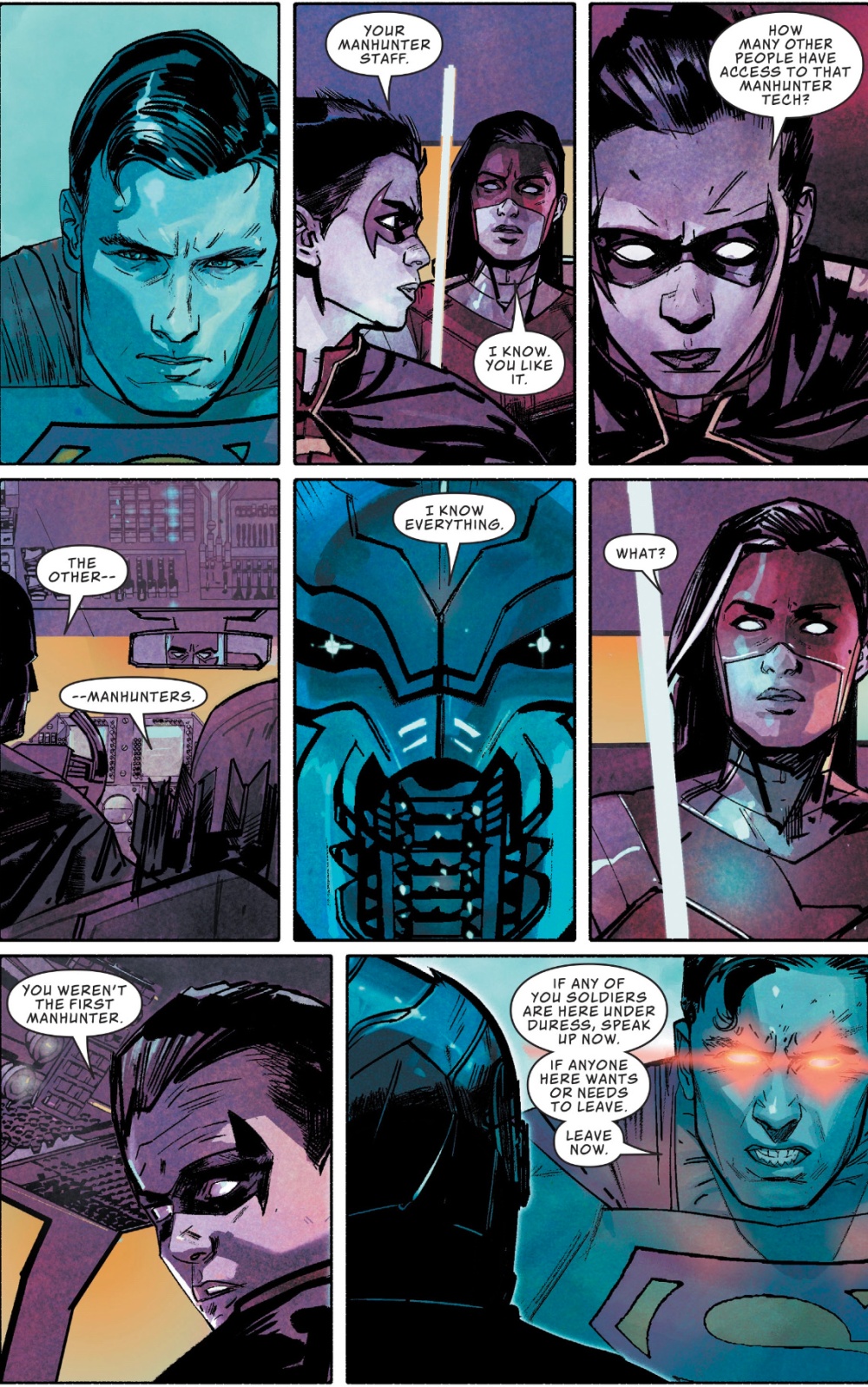 So… Kate Spencer’s predecessor as Manhunter, Mark Shaw? He’s certainly a suspect on a few internet lists, even I suggested him in my review last time, but he’d be a tad out of nowhere in terms of this series’ suspects.

We don’t get a definitive last-page reveal, so I’m not going with that Manhunters business, I reckon it’s a red herring… it’s not like Damian has any reason to connect Kate’s staff – formerly Mark Shaw’s, or at least a man going by that name – to Leviathan tech, unless I’ve forgotten/missed something. Mark Shaw would be a disappointment because he’s never been in the frame, and I can’t see writer Brian Michael Bendis not playing fair with us.

Leviathan’s talk about the world needing to evolve, and the last page appearance of Talia al-Ghul, suggests her father, Ra’s al-Ghul. Yes, he’s on the ‘cleared’ list, and his ego doesn’t suggest he’d ever wear a mask, but he may have his reasons.

Whatever the case, this isn’t the issue in which all is revealed… why did we think the big news was coming? Or did it come, but in a very low-key manner? 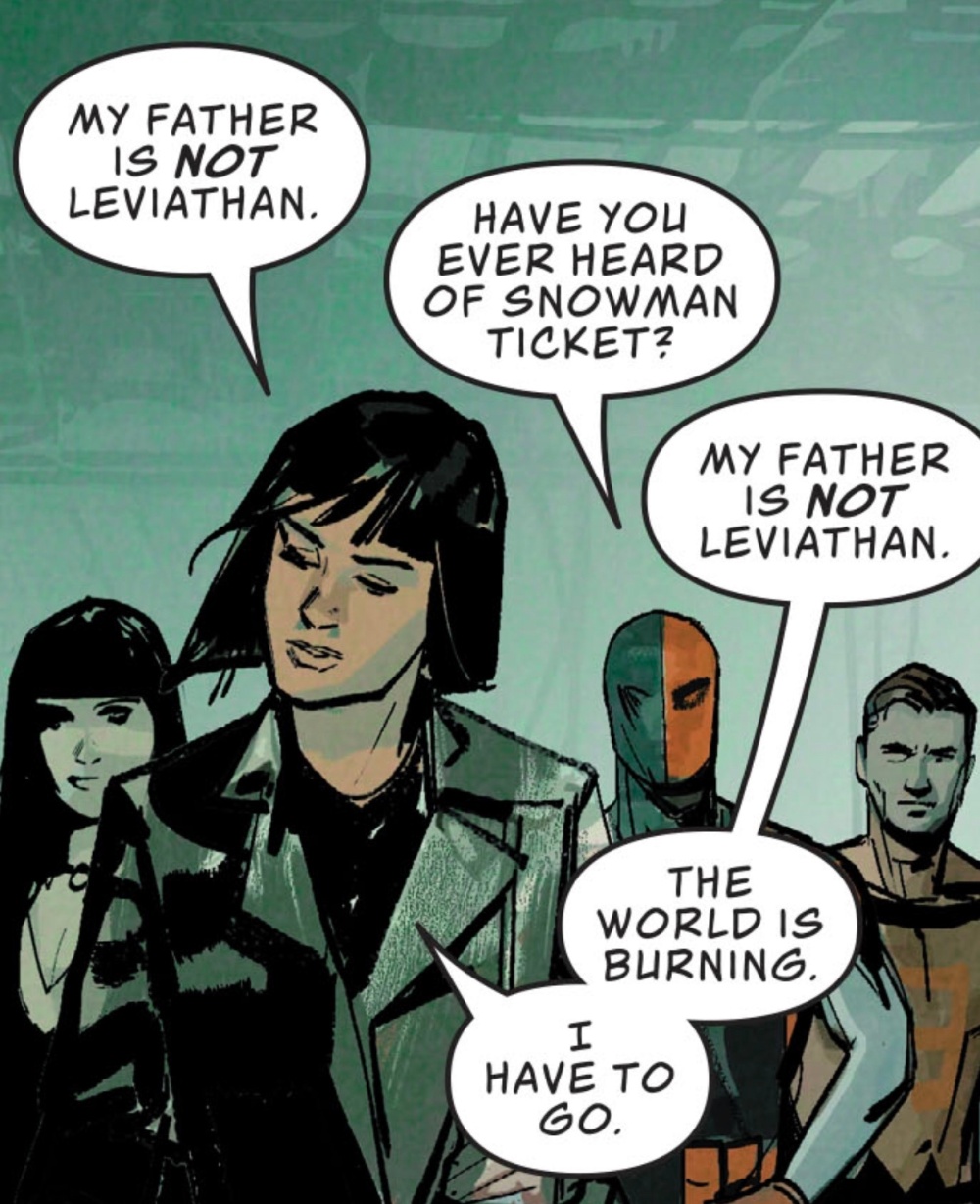 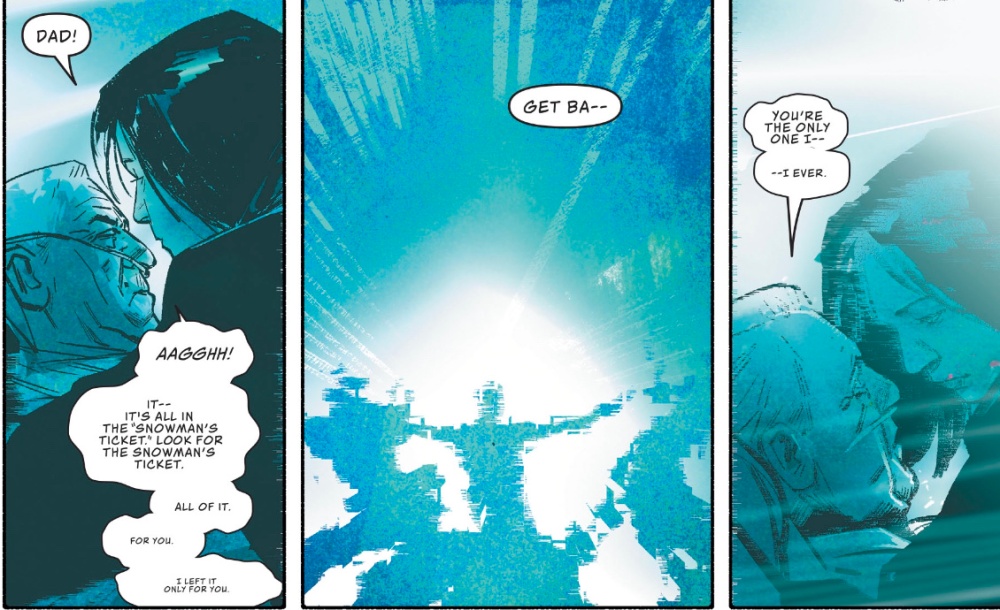 And what the heck is a ‘snowman ticket’? The context suggests something in the realm of John le Carré, but an internet search offers me nothing but visits to shows starring Raymond Briggs beloved Christmas character.

Event Leviathan #5 is another cracking read, with some nicely nuanced characterisation for Lois, a pleasingly take-charge Ralph Dibny and a Leviathan who sounds eminently reasonable as he explains to Superman that he doesn’t have to shoulder all the world’s problems.

And Superman, as we expect from Bendis by now, is just wonderful. 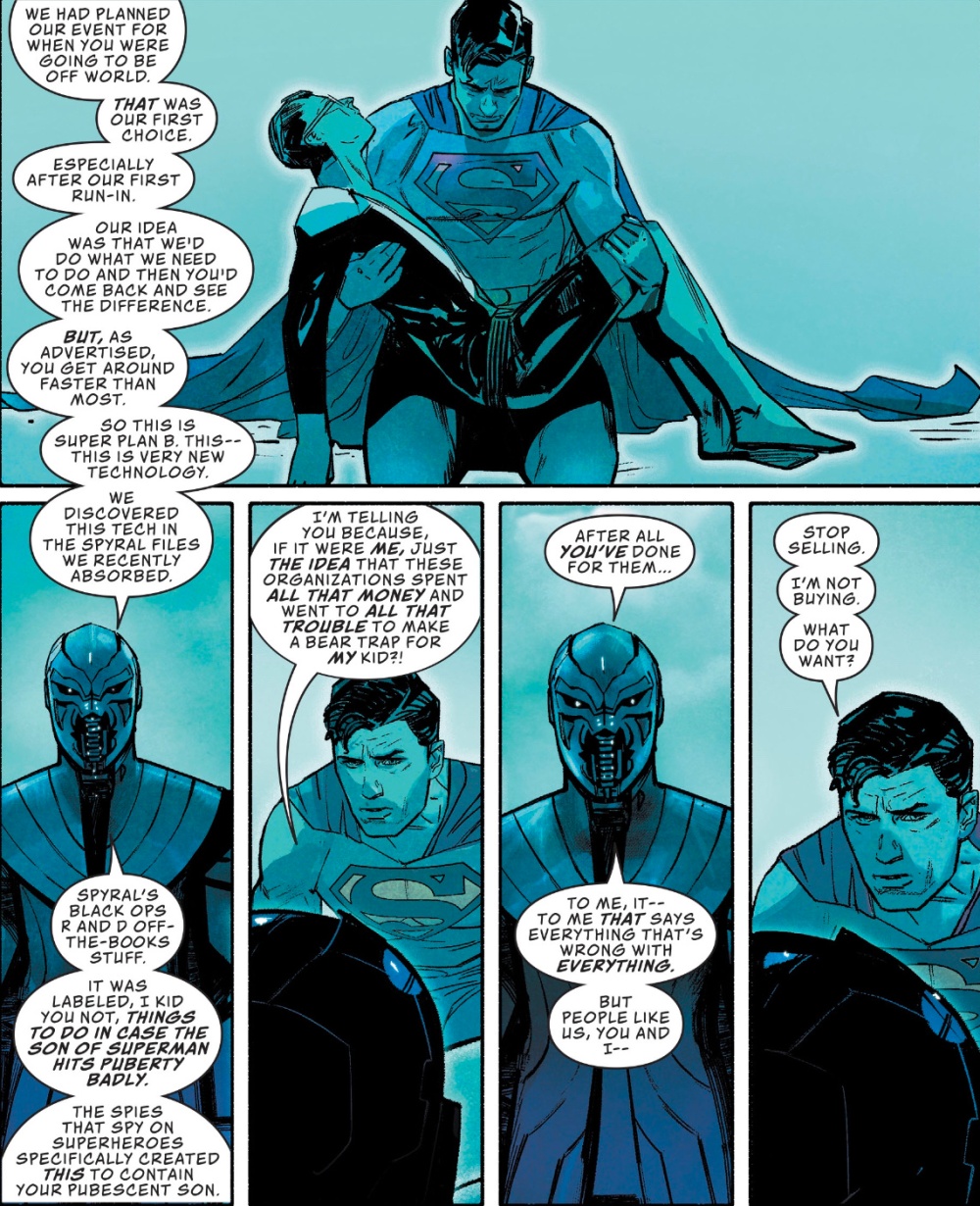 The full-colour art by Alex Maleev is again stellar, with the smaller scenes as impressively expressed as the big, bombastic moments. The opening recap, with intelligently chosen letters by Josh Reed, is especially fine, busy, eye-catching but not over-cluttered. And Maleev’s cover is a rotten, stinking tease… I love it.

So, has Leviathan been revealed? Or do you have any final theories?