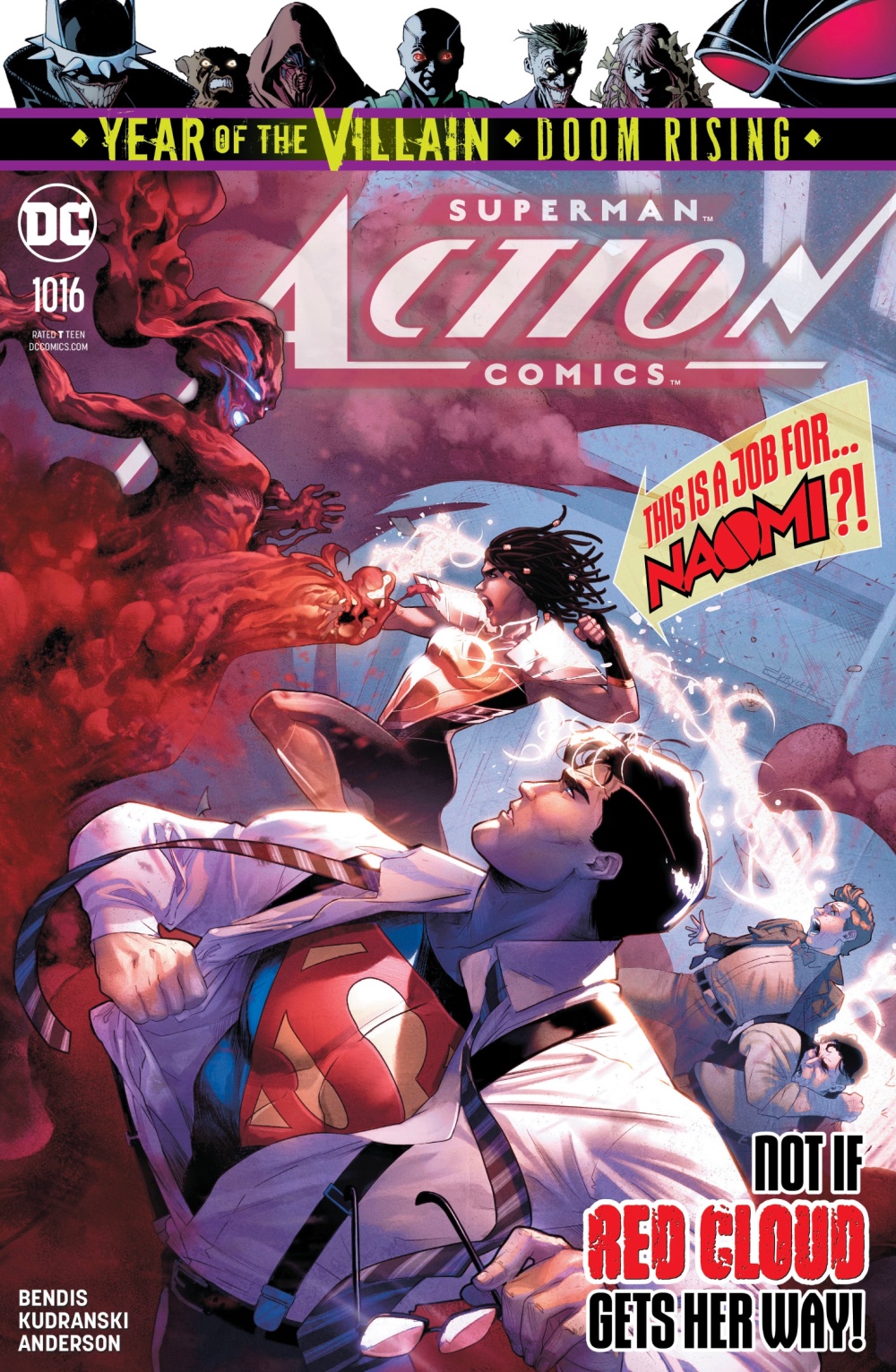 It’s Superman vs Red Cloud round three. Or is it four? Whatever the case, things are different this time, as the mysterious villain is more powerful than ever, courtesy of Lex Luthor.

Metropolis Marvel and Misty Murderess face off in the heart of the city, but readers aren’t there as it happens. Nope, writer Brian Bendis and artist Szymon Kudranski have the traditional innocent bystanders narrate the battle, while flashbacks show the action.

In the wrong hands, the conceit could suck out all tension from the occasion, but Bendis builds same via the emotion which emergency workers, tradespeople and the like inject into the accounts they give them Daily Planet gossip queen turned general reporter Trish Q. They know Superman is on their side and they’re on his.

They don’t know the young woman who joins the fray on Superman’s side, but they’re pretty impressed as her light powers help see off Red Cloud.

A flashback to the Hall of Justice shows how the new heroine Naomi was spurred on to aid Superman. That’s Batman, always ready to throw a kid into the line of fire, while pretending that’s not his game.

After the fight, the World’s Finest heroes deliver Naomi home to her mother, with the Caped Crusader offering advice.

But what a cheeky bugger, implying other heroes are arrogant!

Before they leave, Superman and Batman arrange for Star Labs to monitor Naomi’s Oregon home town, now they know it’s a centre for alien activity.

Does the terribly solicitous Dr Glory, introduced a few issues back, seem suspicious or have I been reading these things too long? Probably both.

This is another very entertaining and satisfying issue. Looking back at my ComiXology files, the Red Cloud business has been going on for a year, but I’m not in the least sick of her. I only want to know more about Bendis’ creation.

I’m also impressed that the writer finds a fresh way to present a bout between superhero and villain, and I appreciate that while Naomi gets a great showcase here, she doesn’t whip Red Cloud’s smoky bottom where Superman didn’t.

And playful Batman is a hoot, empowering Naomi to act while making her aware of the risks. Holy Mixed Messages!

How impressive is Trish Q? Have you ever seen a Daily Planet reporter do so many interviews for one story – her gossip pieces must be right on the nose. Anyway, it looks like Perry’s feeling she might be his ‘most tenacious reporter’ was on the money. I do wonder what the Q stands for… Question?

Szymon Kudranski produces wonderful work once again. His Metropolis citizens come in all shapes and sizes, their testimonies set against an effectively blurred shattered cityscape. He likewise gives Trish Q real character, and his Superman is big and bold, but thoroughly human. Naomi and Batman are similarly on point, the big battle has the required intensity, while the final page conjures a marvellously sinister air. I believe Kudranski is off to Marvel soon for a new launch, which is a big shame as his Action Comics work has been splendid. If you’re reading this, Mr Bendis (well, you never know!), grab him back, sharpish.

Brad Anderson’s colours are an important part of this series, the palette against which Superman lives his life. There’s not an off-note in the issue, with beautifully balanced tones and Naomi’s return to Oregon showing off his talent for dramatic lighting.

And Dave Sharpe’s letters are effective in their straightforwardness.

Jamal Campbell’s cover is a rotten old fib… and I love it. That’s one sharp Clark Kent.

I like everything about this issue, as Action Comics continues to be one of DC’s outstanding series. Brian Bendis and friends are giving us a Superman book like none we’ve have previously, the deep focus on the Daily Planet and the city’s underbelly proving a compelling mix. Now, where’s the annual?