In a thoroughly civilised future, the immortal Rose Forrest is visiting the Space Museum, looking at displays reflecting the long-ago 21st century which spawned her. One of the facility’s janitors strikes up a conversation.

He seems a nice guy, but when he starts offering to take her back to the past in a time machine, she makes her excuses and leaves.

The Thorn encounters freedom fighter OMAC amid a blasted heath and lectures him on the need for mankind to do better.

Further into the future, Rose and the Thorn are/is leaving Earth for the stars. Where once Rose dreaded the emergence of her other personality, she’s not only learned to live with her more violent self, she wants her to see the beauty she’s experiencing. 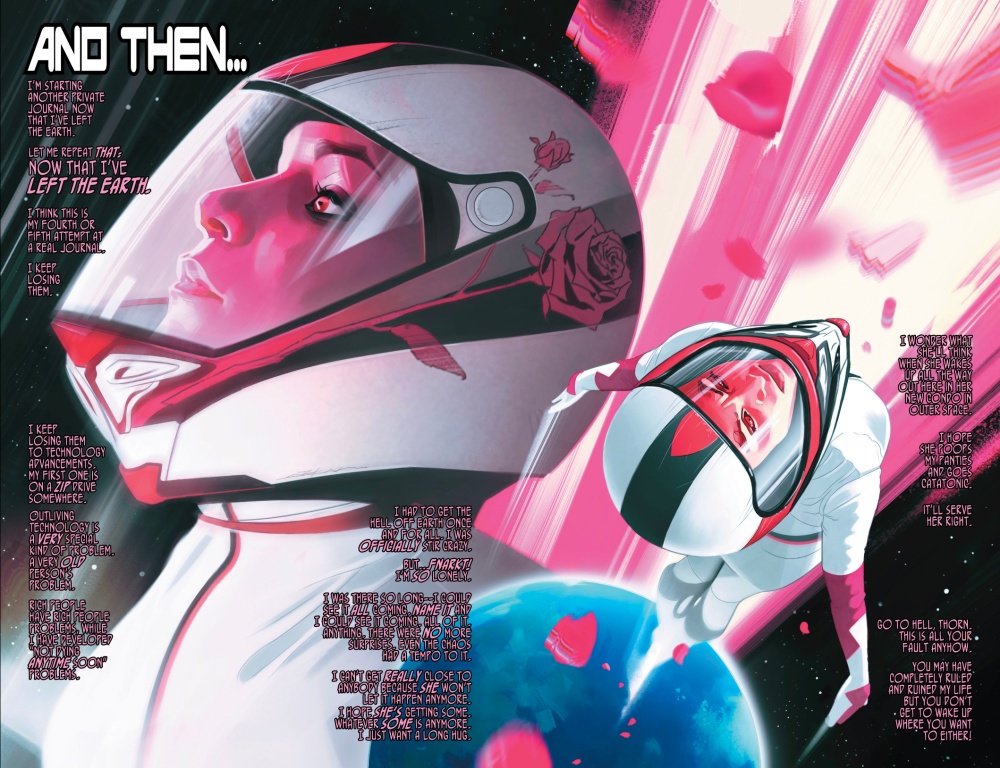 The Legion of Super-Heroes in the 31st century!

Lots of Legion fans will feel a sense of deju vu at the gathering for the recording of a ‘mem’. 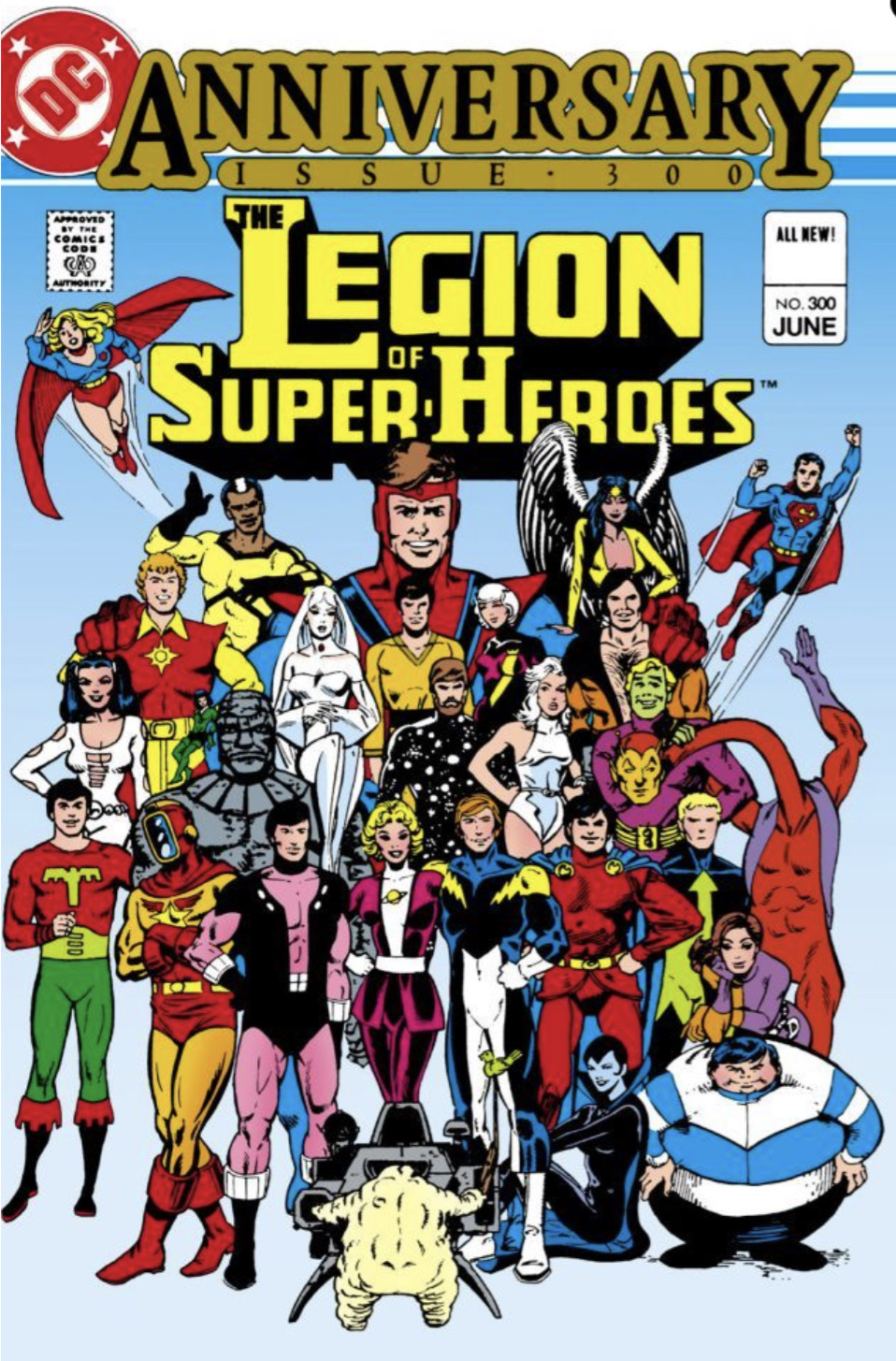 The cover of Legion of Super-Heroes #300 from the Eighties featured Legion of Super-Pets member Proty II taking a group photograph, as depicted by a host of artistic luminaries. This spread is all the work of Ryan Sook, artist on the team’s upcoming book, but it’s equally wondrous, full of the fun and optimism which is a big part of the classic Legion (melodrama and tragedy are too, but they mean more if good times precede them). The words are also crucial to the success of this spread, and if this is the flavour Brian Michael Bendis is going for in the new book, count me in.

With this two-issue mini-series, he promised to walk us from the 21st century, right to the front door of Legion HQ, and that he does. Our guide, Rose Forrest, sometimes violent vigilante the Thorn, has a better time this month than last as we follow her through different time periods. The 25th century, particularly, sees Rose in a good place, physically and emotionally. Her visit to the Space Museum proves meaningful not so much for her as for the janitor who, about five minutes after the scene here, does indeed take a time machine back to the 20th century – along with a few exhibits and a security robot – and becomes the hero Booster Gold. Bendis adds extra depth to Michael, giving him an intriguing perspective on the past; you can see why he had to go back – not just as a means of escape from a life he’s thoroughly messed up, but to be with his heroes… and maybe stop the ‘crisisis’?

(Anyone else elderly enough to remember that Booster and Thorn teamed up in his original series?)

We don’t know if the advice Thorn gives OMAC pays off down the line, but she certainly gives him food for thought, and we see how the other side of Rose is no longer a rage machine, her anger tempered by the wisdom of ‘an old lady’.

That next sequence, in space, is the one for which I have the least context. Everything that’s been referenced previously talks to my comics reading knowledge, but this grim future? I don’t know… maybe the Howard Chaykin Twilight series, which I have, but haven’t yet read. Anybody? Whatever the case, it’s another example of Rose and Thorn growing as characters – I wouldn’t be surprised if, by the time she meets the Legion, Rose has integrated Thorn… I’m very interested to see how she fits into the new LSH book. What is this ‘perfect purpose’ that’s been revealed to her?

I loved this issue. Bendis, Sook, fellow illustrators Nicola Scott, Jim Cheung and Jeff Dekal; colourists Tomeu Morey and Jordie Bellaire; and letterer Dave Sharpe (especially on the Space Rose sequence) do a beautiful job – this is a story fit to sit beside the classic History of the DC Universe, by Marv Wolfman and George Perez. Art of this quality was once reserved for the Prestige Format books, and here it is all for the price of a regular comic. Details such as Rose and the Thorn’s outfits – serene for the former, spiky for the latter – and New Earth, a fabulous update on the 5YL Legion reconstructed Earth, made me grin hugely. And let’s not forget to thank editors Brittany Holzherr and Brian Cunningham for their editorial efforts.

And that cover by Sook… just glorious, brilliantly designed and superbly executed.

What can I say but Long Live the Legion! And Thorn.

5 thoughts on “Legion of Super-Heroes: Millennium #2”