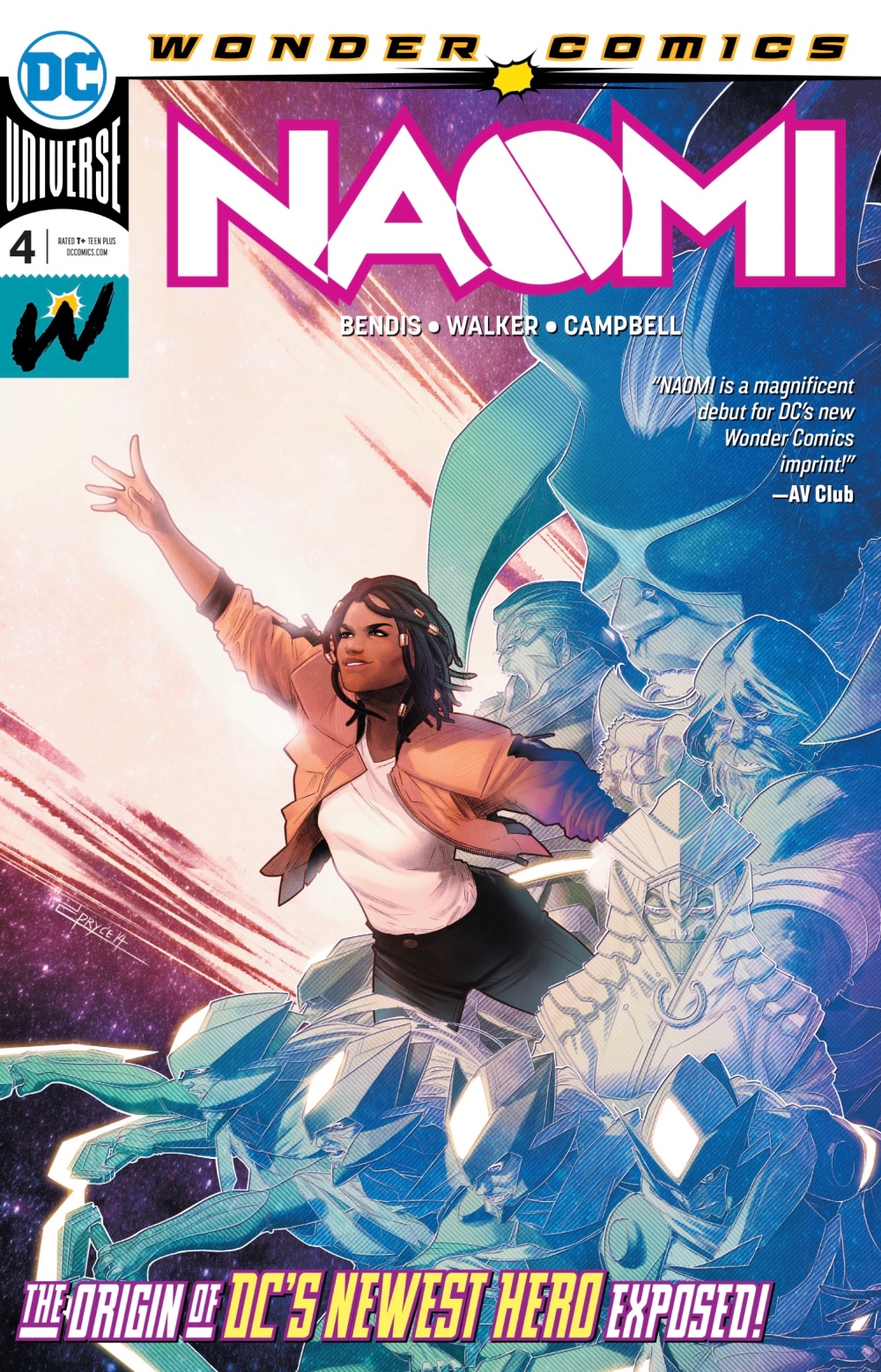 In which Naomi’s dad tells her how he met her mother and how she fell into her parents’ lives.

Last issue ended with Greg revealed as a man from Rann, adopted planet of Earth archaeologist turned hero Adam Strange. Or at least as a man with a Rannian outfit. But no, Greg’s not a cosplayer, he’s the genuine article. He even has his own spaceship. 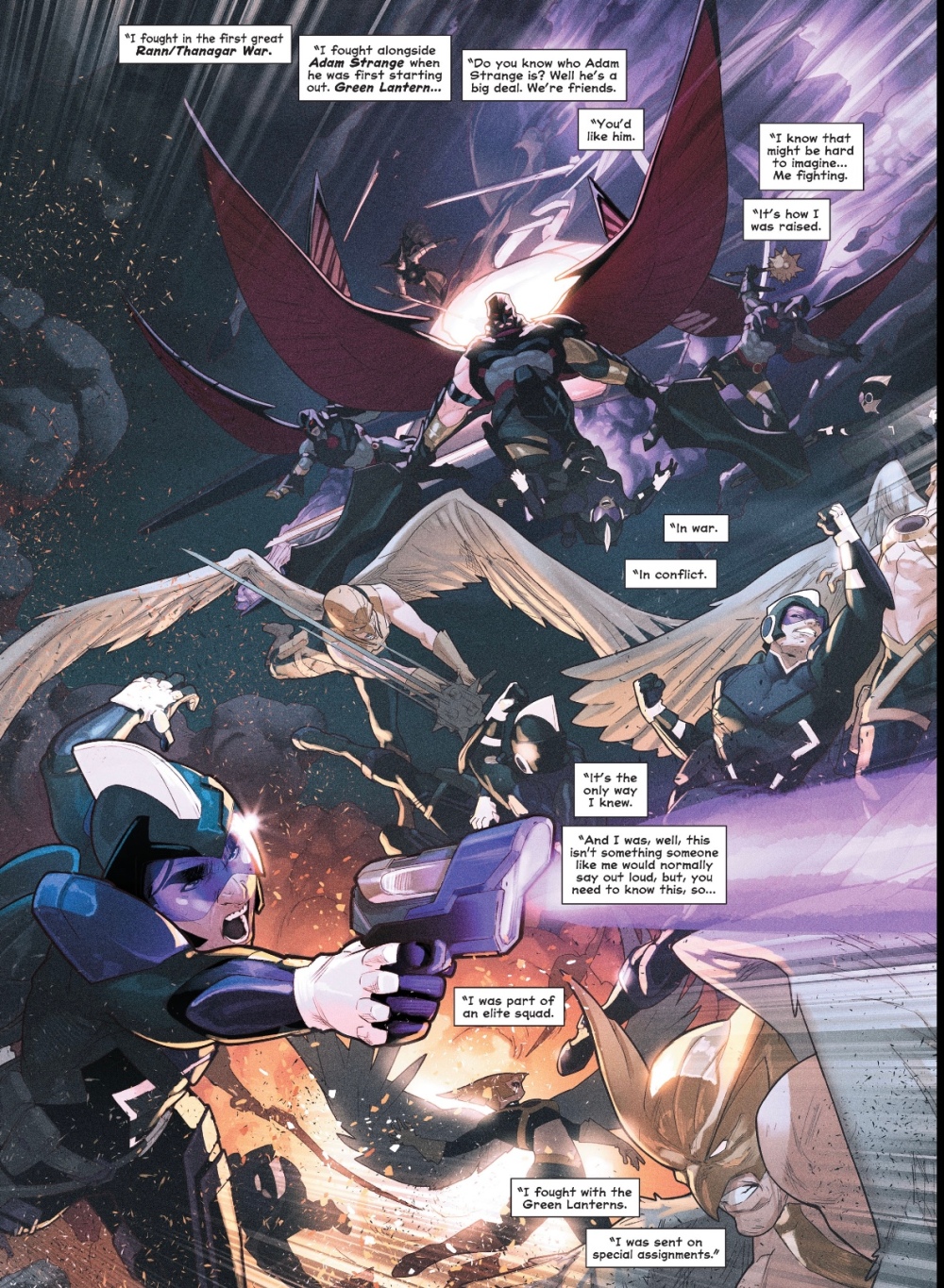 Sent to Earth to spy on the displaced Thanagarian turned town mechanic, who now goes by ‘Dee’, Greg – not his real name either – soon went native himself. The day he met Jen.

He tracked down Dee, and they developed an unspoken understanding, two warriors, a long way from home, forgotten by their generals and so given a chance to make a new life away from the battlefield. One night, though, both Dee and Greg are alerted to extraterrestrial activity outside town. 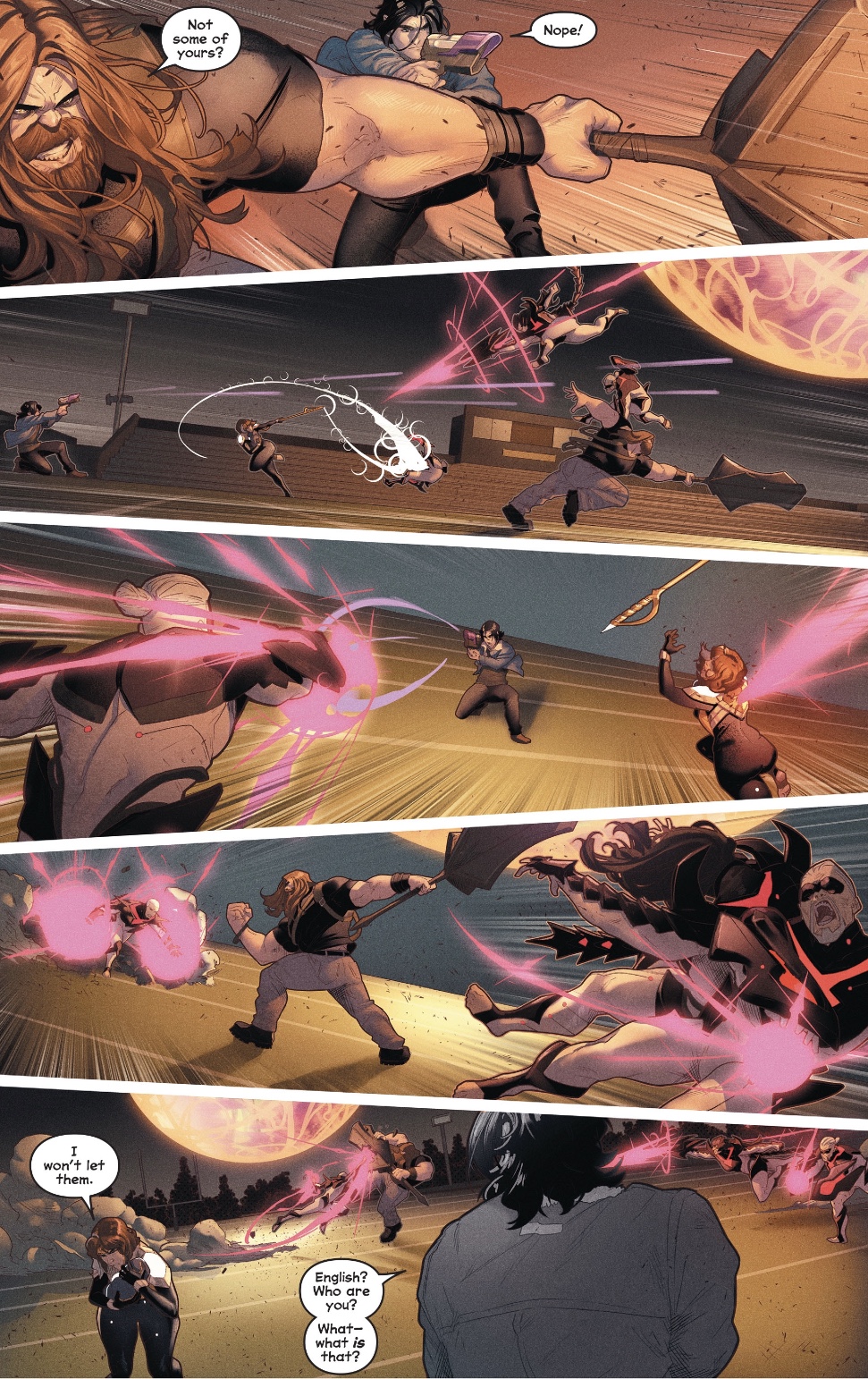 Rannian and Thanagarian find themselves on the same side, defending a young woman carrying a bundle. They try to save her, but one of her pursuers hits the girl with a fatal shot – all she can do before dying is toss her treasure to Greg.

A baby and a box.

And that’s the truncated version of #4. There’s lots more going on: Greg, Dee and Jen all gain nuance; it seems the town of Port Oswego is a galactic bus stop for extraterrestrials; Naomi’s English-speaking protector – maybe her birth mother – fought with a staff whose energy manifested as crescent moons; a symbol mirroring the energy form decorated the woman’s shirt, and, it turns out, baby Naomi’s.

Join me in a ‘hmmm’? That symbol brought to mind a certain member of the Legion of Super-Heroes. 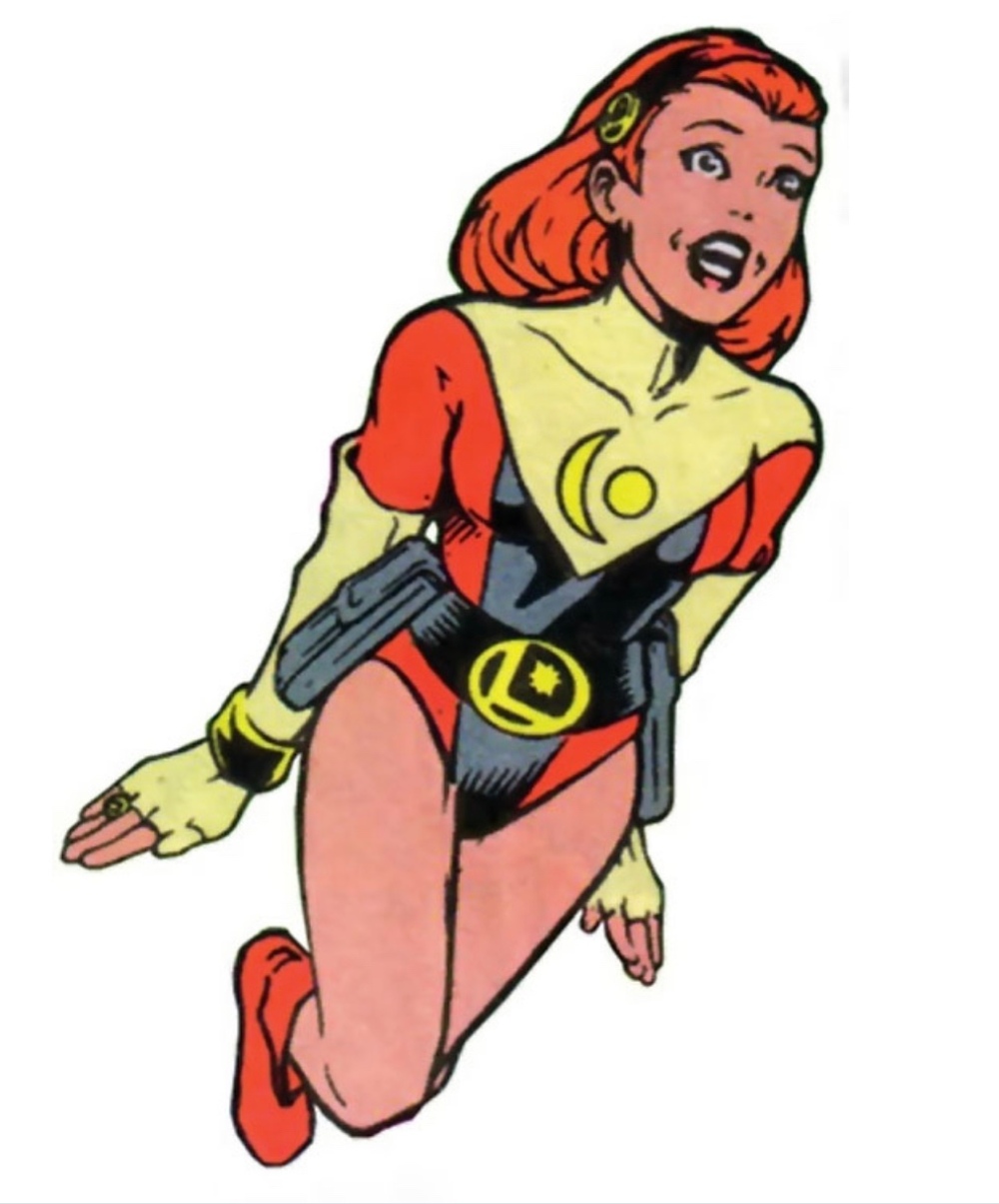 Remember Kinetix, from the post-Zero Hour team, whose powers were so varied that I could easily see her wielding an energy staff. But I’m reaching. No flight ring, for starters – if writers Brian Michael Bendis and David F Walker were teasing us, that’s not a hint they’d leave out. Heck, I’m so desperate to find DC history links to Naomi that I mistook one of the alien’s armoured tails for a stupidly long plait, and had Sovereign Seven flashbacks… now that’s scary.

I really like Greg, he seems a solid good guy and a great dad. Heck, he knows Green Lantern and Adam Strange (Naomi’s godfather?). Jen disturbed me last issue with her anger towards Dee and now I find out she almost certainly knows he’s a refugee who suffers from anxiety, I’m still not hugely well disposed toward her. But Greg loves her, so maybe I should file her under ‘overprotective tigress’.

And she did have style as a young woman, constantly changing her look. Both she and Greg are real lookers, both as fit folk in the flashbacks and softer suburbanites today, as illustrated in gorgeous colour by Jamal Campbell. The artist once again turns in an award-worthy performance, showing first his skill with conversational scenes, then letting loose with wild action scenes, all dynamic angles and speed lines.

One spectacular spread offers 30 panels, with the action occasionally breaking out across two or three; the shapes are uniform, but Jamal’s choices, and skill in executing them, produces a varied pace, a building of tension.

All the way through the issue, Campbell riffs on the rhythm of Bendis and Walker’s story, making an already intriguing, beautifully human script sing.

I don’t know where this comic is taking us, but it’s promising to be big.