Finally. After what feels like a lifetime of waiting we get the reunion of Superman and son Jon after the latter’s trip into space with his grandfather, Jor-El, and mother Lois. The dubious idea behind it was that the supposedly summer-long sortie would put Jon on the road to super-manhood.

It seems to have been a loooooong summer. 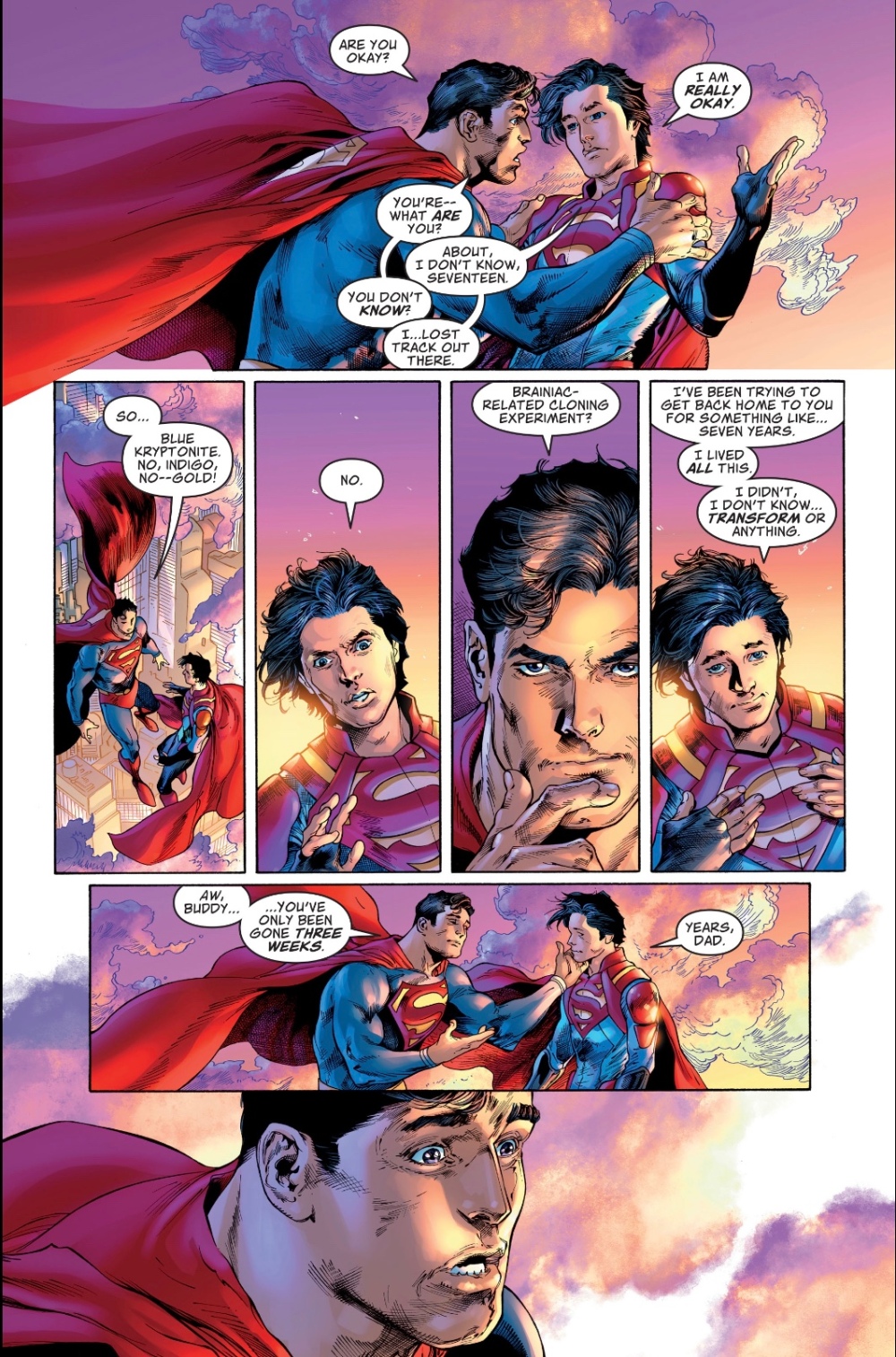 Jon tells his father what happened after he and his mother left Superman for the stars. No sooner were they on Jor-El’s immense spacecraft, than they ran into Dominion warriors, en route to attack Earth. Jon and Jor-El made short work of them, causing Lois to make a decision.

Jon was OK with this… for a short while… 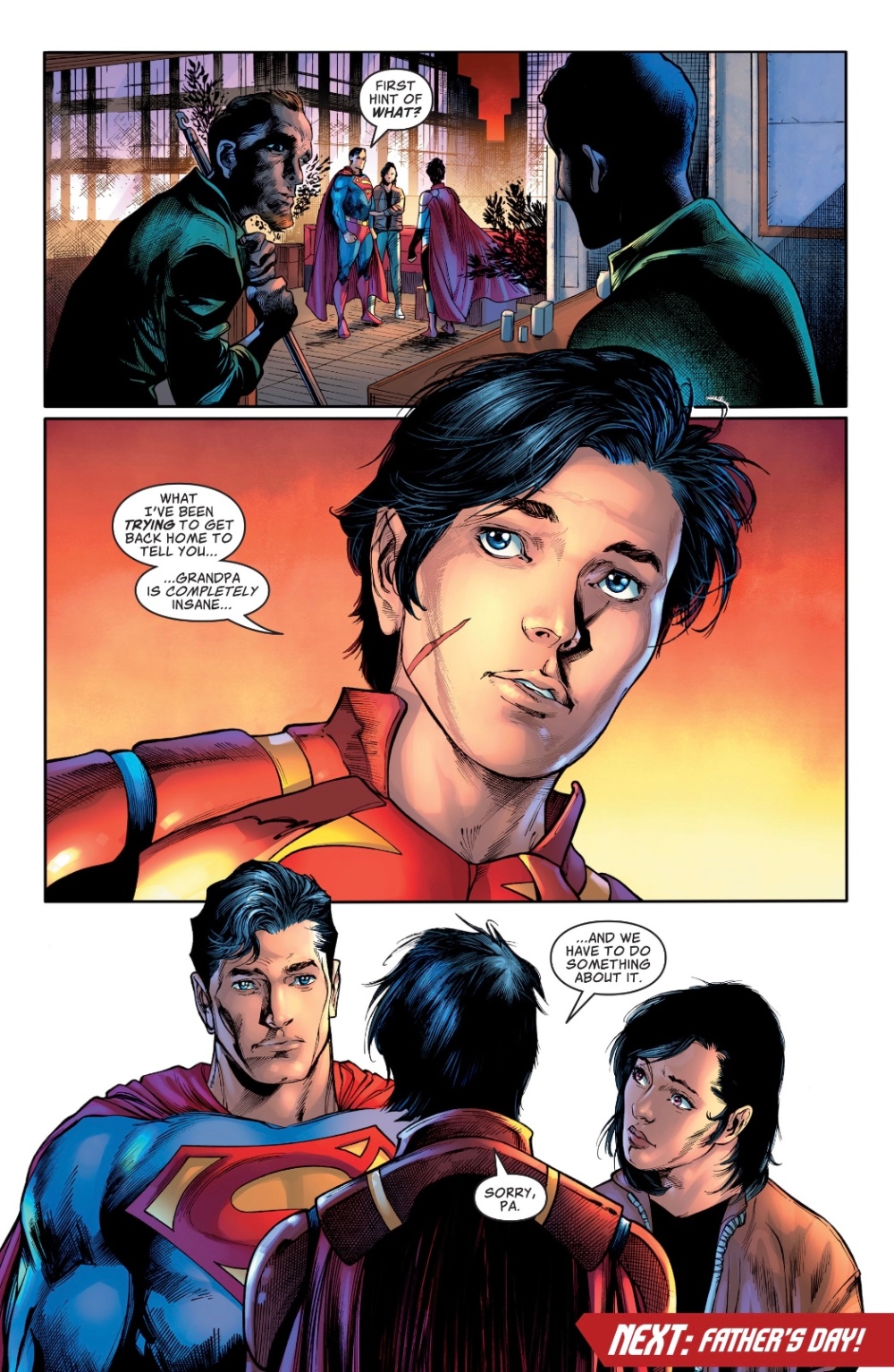 ‘Grandpa is completely insane’? To whom is this a revelation? Prior to leaving Earth, Jor-El had been revealed as the face behind Mr Oz, who had been kidnapping heroes and villains while manipulating wars and disaster on Earth. He fought Clark and tried to kill him. That Lois and Clark should ever let Jon join him on a space vacation because he suddenly presented as a reasonable man made no sense… the guy should have been locked up and given treatment for his mental health.

It was this move by new writer Brian Bendis in his Man of Steel mini-series that had me really worried about his tenure as architect of the Superman line. As it happens, I’ve really enjoyed what he’s been doing, while having qualms about the suddenly mysterious Clark/Lois relationship. But now we’re back to the Jon storyline and Lois compounding her appalling decision to take Jon into space with Jor-El by leaving him there because he’s good in a fight…

How would seeing how scary the spaceways are provoke any response in a sane parent but the desire to return home? Jon is a super-powered kid but he’s still a kid – and a massive target for Superman’s enemies.

On hearing that Jon was returning to the book aged up, I wasn’t too worried… Franklin Richards, Bart Allen… plenty of super-kids have been temporarily aged, only to return to normal after a storyline or too. Jon’s insistence that he’s ‘earned’ his 17 years makes things a bit trickier to get him back to the sweet tween he was, but it’s not an insurmountable problem. I suspect Bendis is toying with us; would he really freeze Jon as a late-teen just as he’s bringing back a classic Conner Kent over in Young Justice? Certainly it seems he’s setting up a back door here…

Qualms and puzzlement apart, the relationships remain a delight in this series, with the return of Jon adding to the fun. I love the lingering hug between father and son, and what happens when Clark and Jon arrive at the hotel Lois has been staying at of late (for reasons I can’t fathom). The space fights are fun, though I could do without Jon doing the angry red eyes bit, it’s a modern cliche I dislike immensely. I adore that Jon calls Clark ‘Pa’.

There’s an excellent scene in a space eatery that has Jon standing up to one of DC’s nastiest cosmic types, and Lois is reminded what it means to wear the ‘S’.

Penciller Ivan Reis and inker Oclair Albert handle the modern-day Earth scenes, Brandon Peterson gives us the space drama and Man of Steel artist Jason Fabok pops back for a single-page flashback to that series, which seems a tad unnecessary. All the pages look good, with nice, expressive work. and there’s an intriguing cameo by someone who looks like Antennae Boy from the Silver Age Legion of Super-Heroes series… another hint Bendis plans to bring back the team?

Reis, inker Joe Prado and colourist Alex Sinclair – who does a great job on the interiors – give us a striking cover that’s nicely representative of the story, while illustrator David Finch and colourist Brad Anderson produce an angry red-eyed Superman… well done for what it is. 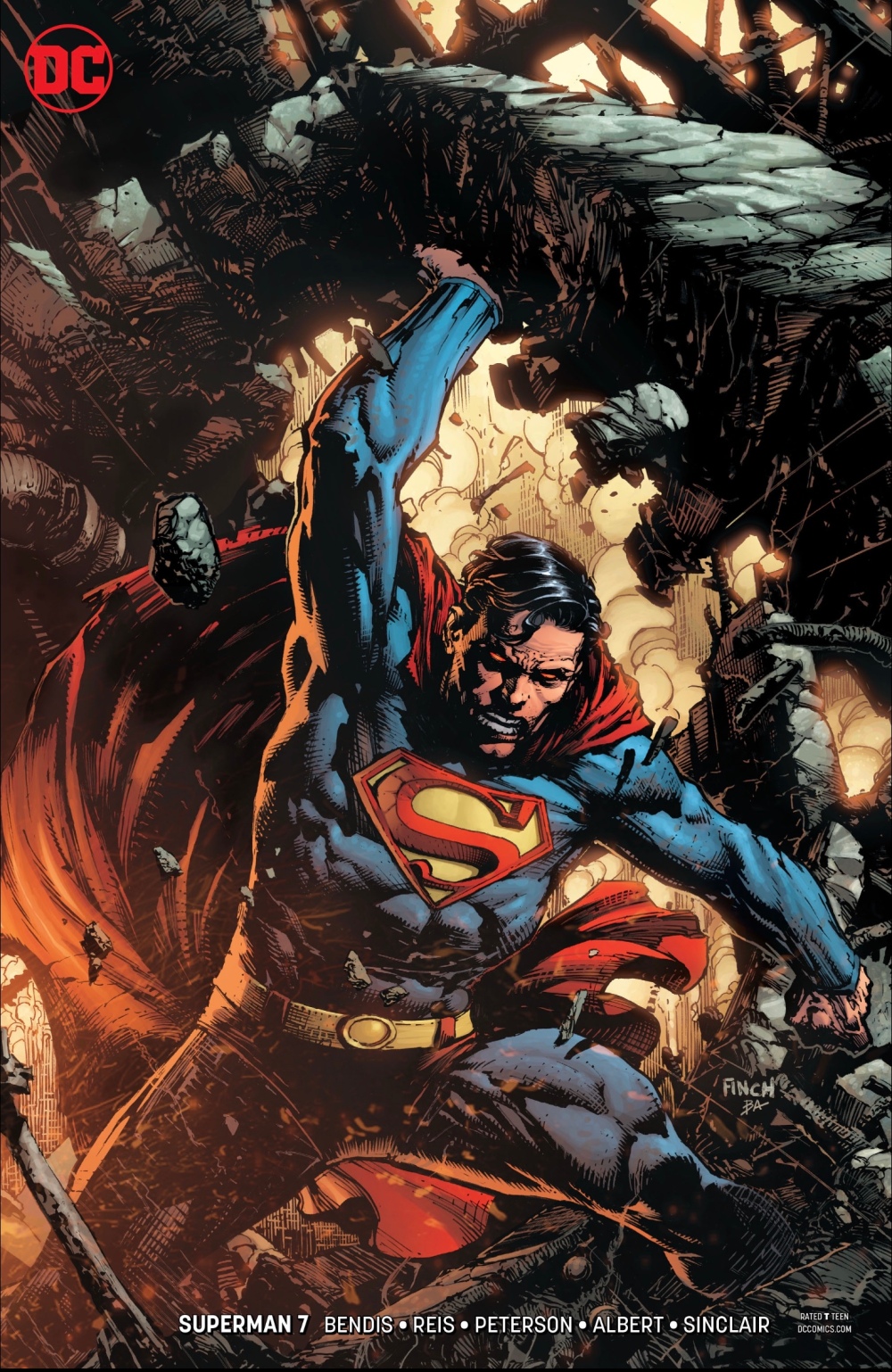 So, an intriguing issue that has me a little nervous, but I’m refusing to throw out my optimism that we will get Jon back to his proper age, and the Kents living together again. How about you?