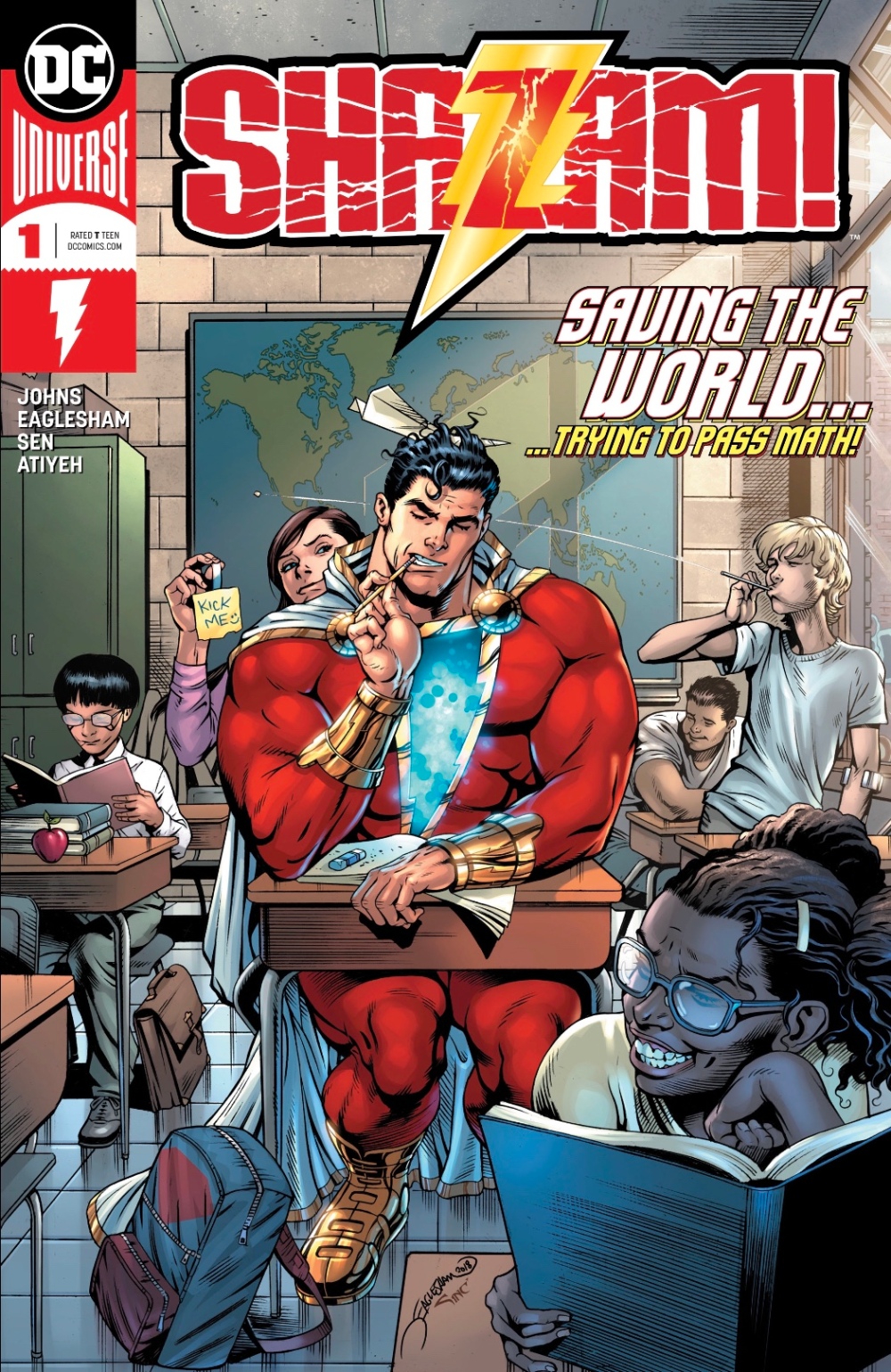 Well, no, the sextet of colour-coordinated kids channelling the old wizard’s powers in DC’s latest Shazam series aren’t going by the traditional name. As we join them in this sequel to Geoff Johns’ 2011 Justice League back-up they’ve been operating in Philadelphia for a year and haven’t come up with a team term.

Technically, the lightning-transformed Billy has inherited the name ‘Shazam’ from the old wizard who granted him powers. He’s been sharing the elder’ powers with his five foster sisters and brothers, and has even had the odd adventure with the Justice League.

This isn’t your father’s Shazam comic. Or your grandmother’s. It’s the New 52 version, about which I’ve moaned previously. By all means, let’s have a comic about a diverse gaggle of youngsters, but why connect them to the original Captain Marvel? If Geoff Johns likes Billy, Mary and Freddy enough to pitch a strip about them, why stray so far from the traditional set-up?

Those questions remain. This isn’t the Shazam comic I want – that would be something like Grant Morrison’s Thunderworld. But for what it is, I rather enjoyed it. Billy is less obnoxious than in the Justice League shorts. The interaction between the six kids is fun. There’s an intriguing discovery. And the cliffhanger is a comic book classic.

I’m not keen on Freddy being so far removed from his classic look and character; instead of a plucky, polite, black-haired teen he’s an annoying blond bro. I hugely dislike Billy and Mary throwing magic spells around. And it’s weird that a bunch of bright, engaged kids haven’t yet decided on superhero names. But these are niggles, if we can’t have a classic Captain Marvel series right now, I’ll read this and see where it goes… who knows, Johns could be planning to have all three of the new kids – Eugene, Darla and Pedro – die in a horrible accident, with Freddy cutting his hair and dying it as a sign of mourning? Johns has form. But I hope not, the new kids are here and I like them; also, I want to see one of them go bad, it has to happen!

Illustrator Dale Eaglesham puts a lot of personality into the kids. Look, for example, at team muscleman Pedro trying Charles Atlas poses as he tackles some bank robbers. Observe Darla’s glee at having more agency than your average teenager. Mike Atiyeh’s colours are a true treat throughout, and the rainbow of costumes looks brilliant (presumably Billy and Mary having the same colour scheme is a clue to their so-far-undiscovered relationship). Rob Leigh never disappoints with his lettering, he’s especially terrific at title designs. The storytelling is great all round, a few tweaks – lose the cosmic bubbles from the chest symbols, delete foster dad Victor’s tragic chin hair, make Mary look a tad less sexy – and I’ll be a very Hoppy bunny.

Speaking of Hoppy, a version of the old Marvel Family character shows up in a sweet back-up by Johns with full-colour visuals by Maya ‘Sen’ Naito telling us Mary’s story. It’s good character work, presented in an artistic style that’s miles from the main strip yet equally attractive.

But, it shouldn’t be in here… the back-up pushes the price of this first issue up to $4.99, which is bound to stop a fair few people trying the debut issue. And while subsequent editions look set to be a more usual $3.99, I understand more shorts are coming; if they take pages away from the main strip, I’ll be disappointed. It would make sense to have Sen draw one connected story for each kid, leading up to a big finish, and place them all in a big, great-looking annual.

The digital edition gives me two covers – a personality plus schoolroom shot by Eaglesham and colourist Alex Sinclair, and a glorious image of Capt… Shazam by his Justice League delineators, artist Gary Frank and colourist Brad Anderson. 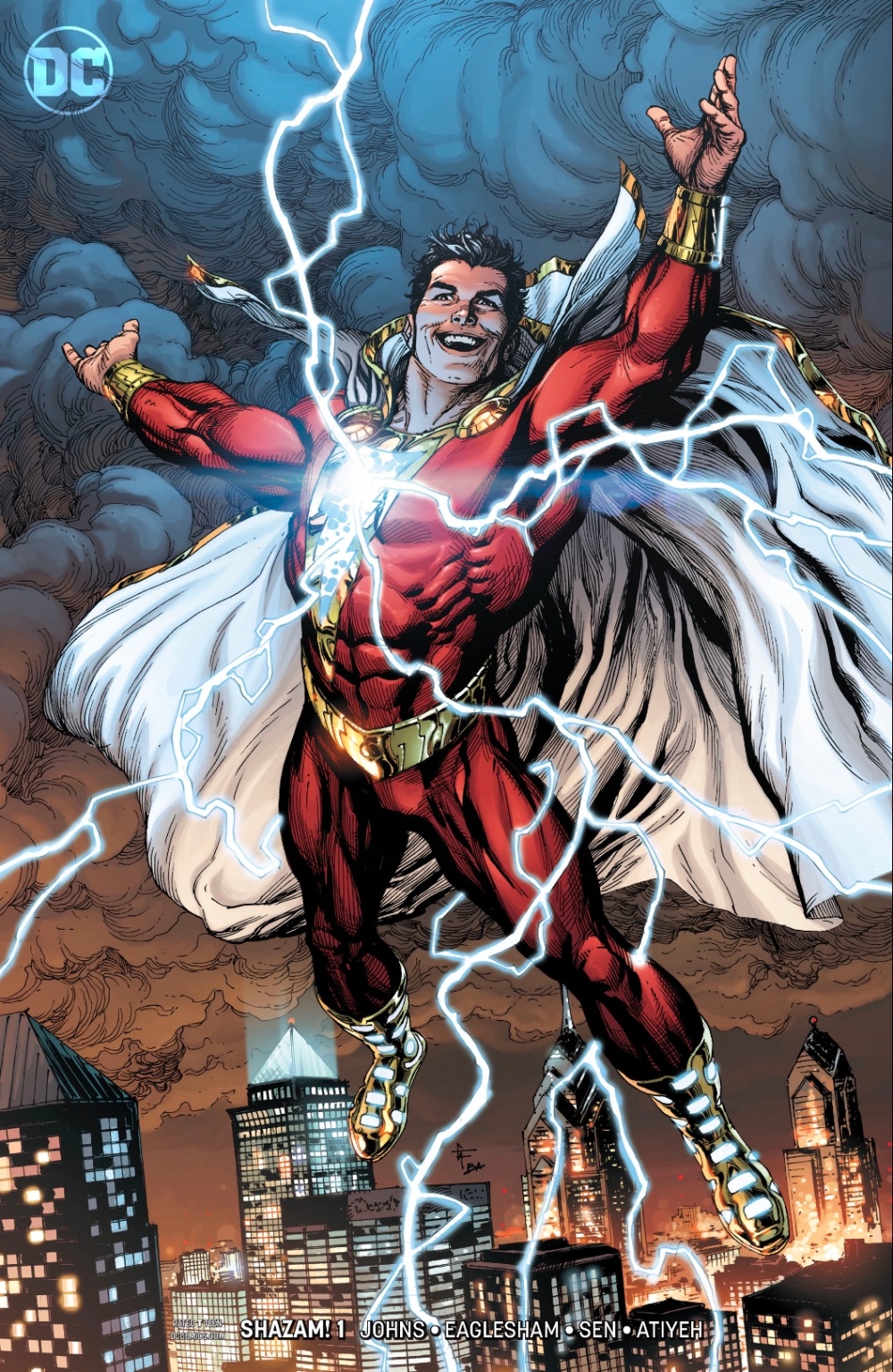 I was surprised that I was able to get over my entirely reasonable prejudices and enjoy this issue as much as I did. Anyone else?