A few years ago, police detectives John Jones and Diane Meade are called to a crime scene. The parents are dead, the daughter is missing. Jones, secretly a Martian, gets a telepathic flash.

We see from a flashback to life on Mars that fright foam most likely equates to human blood. Also, that while he was also a policeman there – a Manhunter – J’onn J’onzz was not a good man. 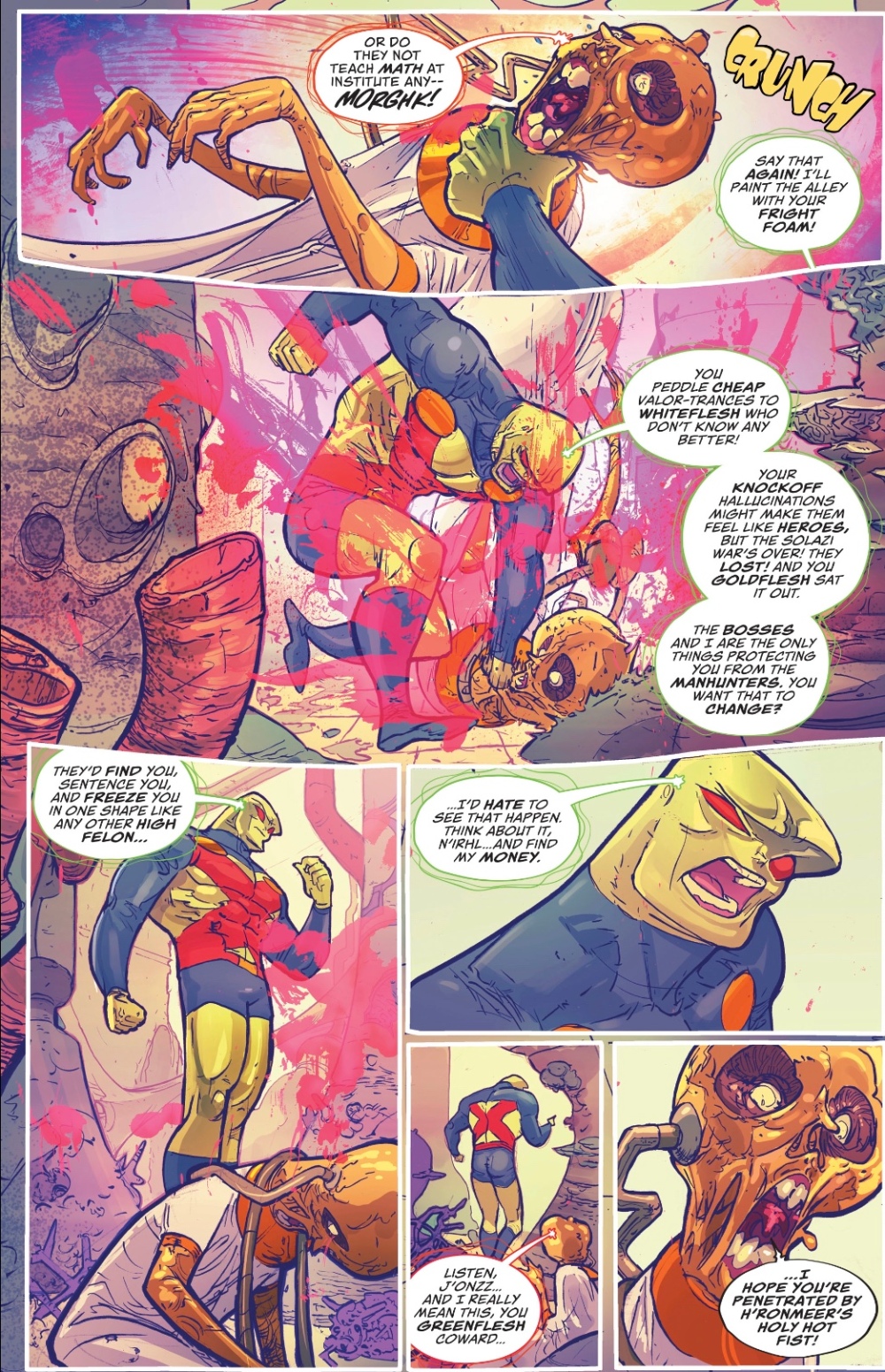 Later, at home, his wife is upset that he doesn’t share his most private self with her.

The flashback ends and Jones is distracted while driving…

This is a stylish book, no denying it. The art of Riley Rossmo gives it a unique look that serves the Mars sequences well, where people have public and private appearances (that would be a metaphor, kids). Jonn’s chosen look is the familiar humanoid who’s been appearing in DC comic books since the 1950s, with much, much tighter shorts. What’s new is the idea of him as a shakedown artist, and so far as ‘everything you thought you knew was wrong’ makeovers go, I hate it.

Absolutely hate it. I nearly didn’t buy this book on hearing the premise, that it’s going to show us how a bad guy became a hero. Of course, redemption is great, but do the storyline with a new character, not J’onn J’onzz, a shining hero since his debut. Can’t a guy just be good? Does DC have to jeep giving its heroes feet of clay, or deep motivations? Hal Jordan, drunk driver, becomes a space cop. Barry Allen, obsessed with his mother’s murder, becomes a speed angel…

… can’t a guy just be a hero? Was anyone clamouring for a story in which corrupt cop J’onn nearly beats an associate to death before forming a sex blob with his wife?

I bought this book because, like me, Steve Orlando is an Old Fart Fan, and I’ve enjoyed his work on Justice League, Midnighter and elsewhere. I like the weirdly dynamic style of Rossmo, and the cool Seventies leisure suits and exaggerated hair make me smile. And I enjoyed half the comic – the half that had Jones and Meade diving into a case, bantering as they mull the evidence. I didn’t much care for the flashback, and especially all the Martian slang – I can take the odd ‘grife!’ or ‘sprock!’ in a Legion of Super-Heroes story, but otherwise, let’s stick to regular English, otherwise a book becomes a chore.

Dialogue nods to the Martian Manhunter’s creators were nice, but a little distracting, and if we’re going to set the story in Jonn’s old city of Middletown, why change the spelling to Midleton?

I’d love to read a modern day Martian Manhunter book by Orlando and Rossmo. The level of craft here is high – let’s not ignore the superb colours of FSC Plascencia and letters of Derron Bennett, and stunning covers by Rossmo (regular) and Joshua Middleton (variant, and nice coincidence) – but I don’t think a 12-issue maxi series revamping the origin is for me. Mars is always my least favourite aspect of any J’onn J’onzz series, and an utterly crumby version of the world has even less appeal.

So, I think I shall bow out. If I hear great things, I’ll be back, either downloading or waiting for the trade. Meanwhile, what did you think?