Trapped on an alien world, Jon Kent and Damian Wayne have been lured into the House of Mystery and Secrets. Waiting for them are two visions of the future. 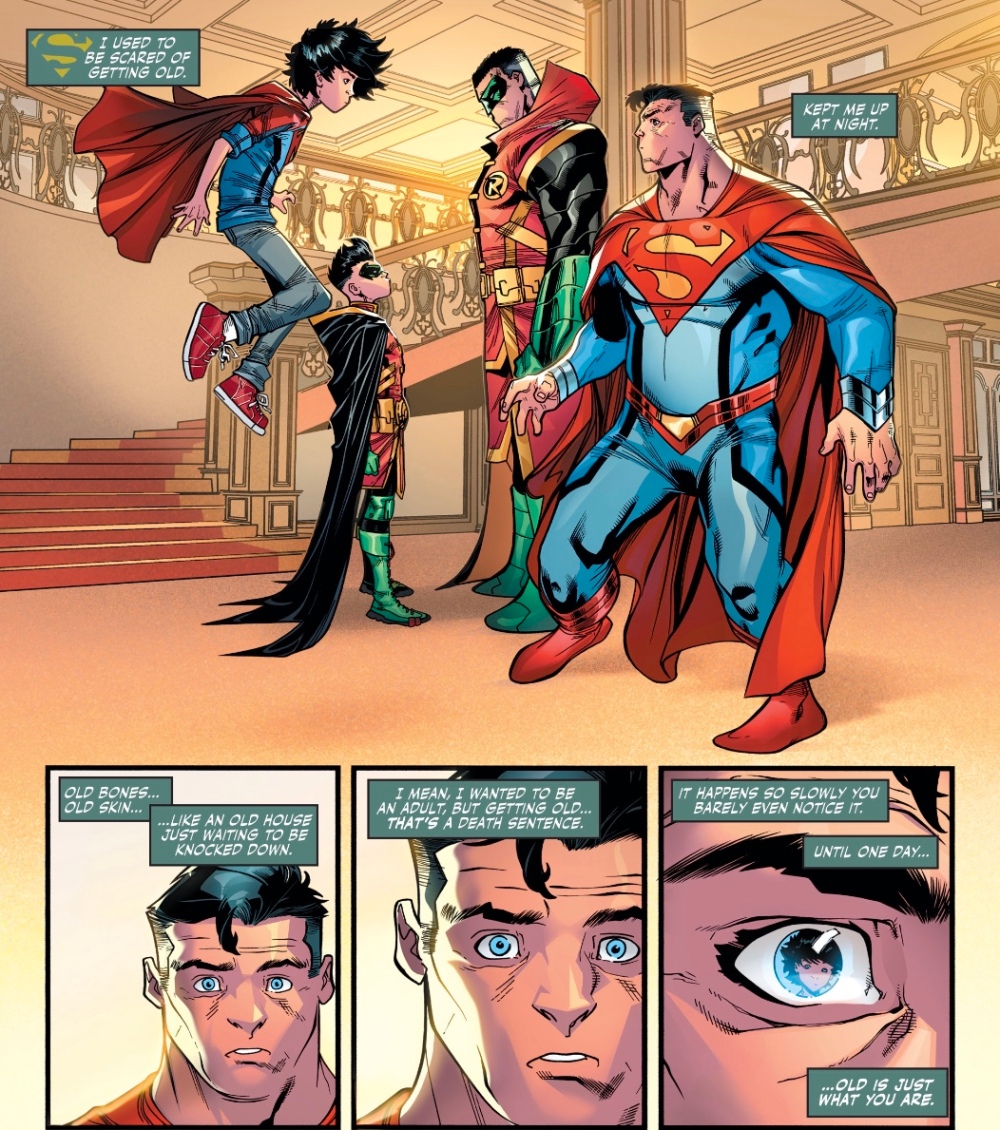 Damian assumes someone is trying to dupe them, but the more open-hearted Jon is quickly convinced.

Soon, they meet their hosts, Klain and Labell, who claim the doors they open will take the boys home.

Well, they get home all right – the homes of their future selves. Young Damian and Jon are no nearer 2018 earth than previously. In fact, they’re in a worse situation that they know, tied to a machine feeding them fantasies.

Can they save themselves? You betcha.

We’ve seen superheroes inspire others many times, but this is the first time I’ve seen heroes inspire themselves. Jon and Damian are so full of youthful pep that they can make a computer program the size of a planet turn on itself. That’s inspirational heroism, and a moment typical of a comic that puts a fresh coat of paint on classic DC ideas. So we get a take on Alan Moore’s Black Mercy plant in Klain and Labell’s dastardly plot. I see a nod to the original, Seventies Super-Sons stories as regards the choice not to reveal future Jon’s wife – the mothers of Superman Jr and Batman Jr were also obscured in World’s Finest Comics, never named. And the machine itself recalls the Bronze Age twist that the original Super-Sons stories were the products of a Fortress of Solitude computer simulator.

The question I’m left with is, did Space Cabbie pierce the Sandman’s realm, The Dreaming, where the real Houses of Secrets and Mystery, inhabited by storytellers Cain and Abel, occur, and that’s where this issue takes place?

AotSS #5 also checks in with Joker Jr and Rex Luthor (as a Scooby-Doo fan, I always want to type ‘Rex Ruthor’) of teen villains The Gang; I’m ready for their story to be tied up, the wee radges.

Has DC announced yet that they’re reinstating Super Sons as an ongoing monthly after this year-long series is over? Why would they not? Peter J Tomasi’s tales are a delight for old DC fans and, I bet, younger ones too. Favourite moments this time included the interaction between old and young Jon, and Damian’s ability to reject even the most seductive lie. I’m tickled that older Jon’s personal paradise is Hamilton County, where Tomasi and Patrick Gleason had Superboy living in Superman, before other hands relocated him to Metropolis.

The art by penciller Carlo Barberi, inker Matt Santorelli, colourist Protobunker and letterer Rob Leigh is delightful – animated, full of character, bright and always clear. There’s an especially nice page in which white space is used to imply the two Damians are falling through reality.

Dan Mora’s cover is an excellently executed grabber, and keeps up this series’ winking at the past in being a total misrepresentation of the issue. Even the copy is an outright lie. What really made me smile is the use of the Golden and Silver Age Superboy logo letterforms… now, if only someone would place ‘em on an arc.

Just as the older Jon and Damian realise their days as crimefighting besties was a golden time for them, I’ll look back on their comic series as a favourite read.