Well, this sounded gloomy. Clever title, certainly, but the idea of an entire anthology devoted to post-Apocalyptic stories? It’s not like DC didn’t milk the notion years ago, with their Legends of the Dead Earth crossover across its annuals. But… but… it’s a DC Christmas giant, the kind of book that gave us such classics as Should Auld Acquaintance Be Forgot and Star Light, Star Bright… Farthest Star I See Tonight. There’s always the chance a yarn to compare with them will appear. So let’s see what’s behind that cover by illustrator Yanick Paquette and colourist Nathan Fairbairn, which is a winner if you ignore the fact that Wonder Woman is grinning after skewering one or her supposedly beloved Kangas. Excellent logo design, too.

RIP Hunter, Time Master, is in dire straits. He’s emerged from the timestream in Silicon Valley, a few years from now. The world has gone to hell, food is scarce, and the minions of tech giant Oogle see him as their next meal. Shame he’s forgotten to charge his time sphere.

With Flintstones alumnus Mark Russell writing, it’s no surprise that there’s smart satire in this Arabian Nights update which, unusually, doesn’t simply top and tail the book, it pops up a couple of times in between the shorts to show us how the narratives are going down. It’s lovely stuff, winningly drawn by Mike Norton, and a delightful way into the special.

Rip’s first story concerns Batman – not Bruce, but Damian Wayne, the Darker Knight created by Grant Morrison. Trying to survive a nightmarish – well, moreso than usual – Gotham is bad enough, without having to contend with an uninvited relative. That’s Christmas for you, and this is a sweetly violent entry from writers Collin Kelly and Jackson Lanzing and artists Giuseppe Camuncoli and Cam Smith. I especially like the dynamic compositions that follow the first page, a cleverly composed split splash.

There’s more Morrison influence in the next story, which features his Superman of the 853rd century, Kal Kent. It also stars the Martian Manhunter in a callback to his Nineties series, and features a very obscure pre-Crisis villain. Yep, this is from DC history buff Steve Orlando, and it’s a pleasant seasonal confection, with stylish art from Brad Walker and Andrew Hennessy. 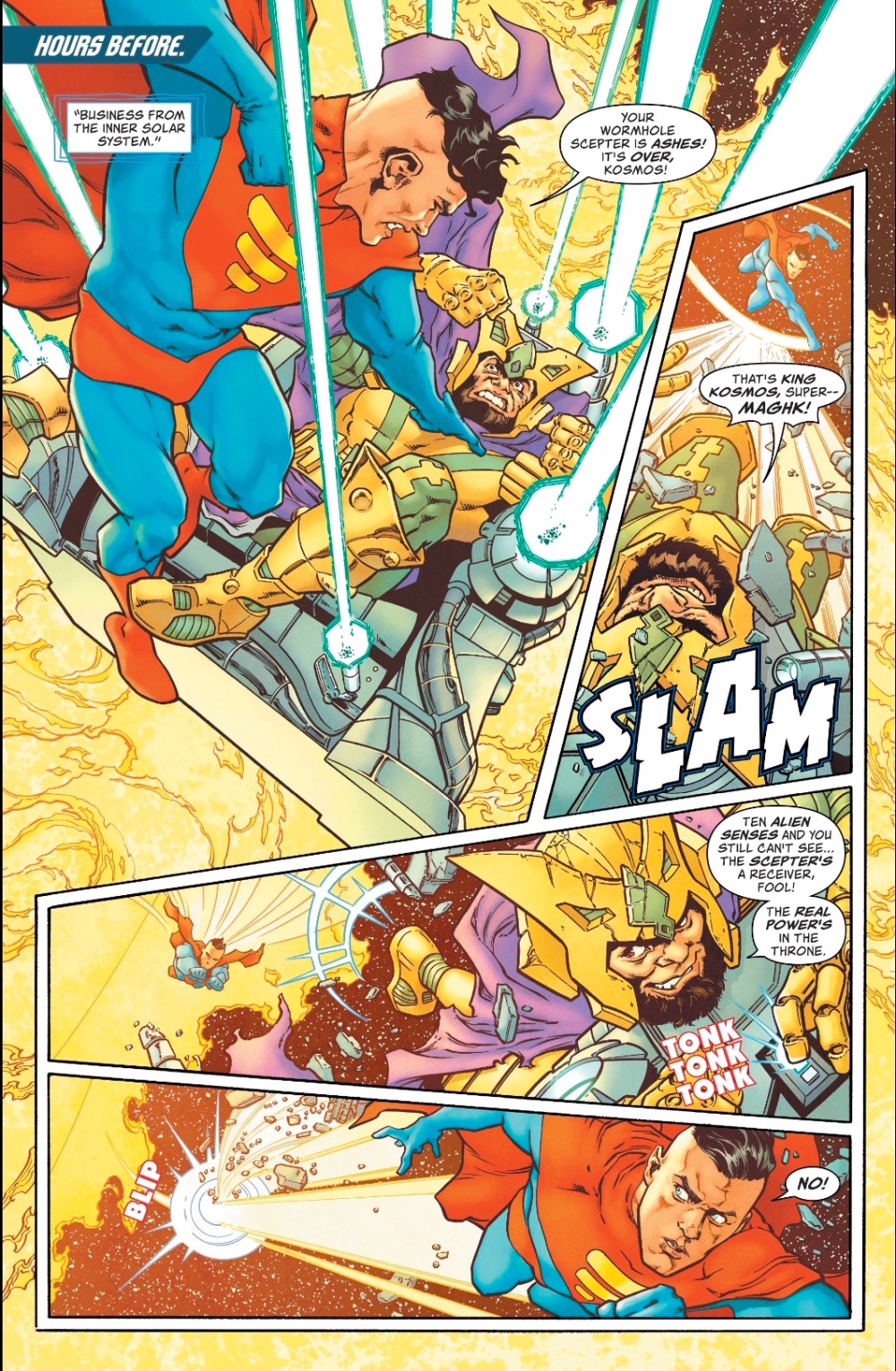 Melancholy is one of those emotions especially suited to Christmas and the Flash mainlines it in a tale of Barry Allen’s final days. Somehow, writer Jeff Loveness gives us a happy ending in a sterling short with powerful art by Flash regular Christian Duce. 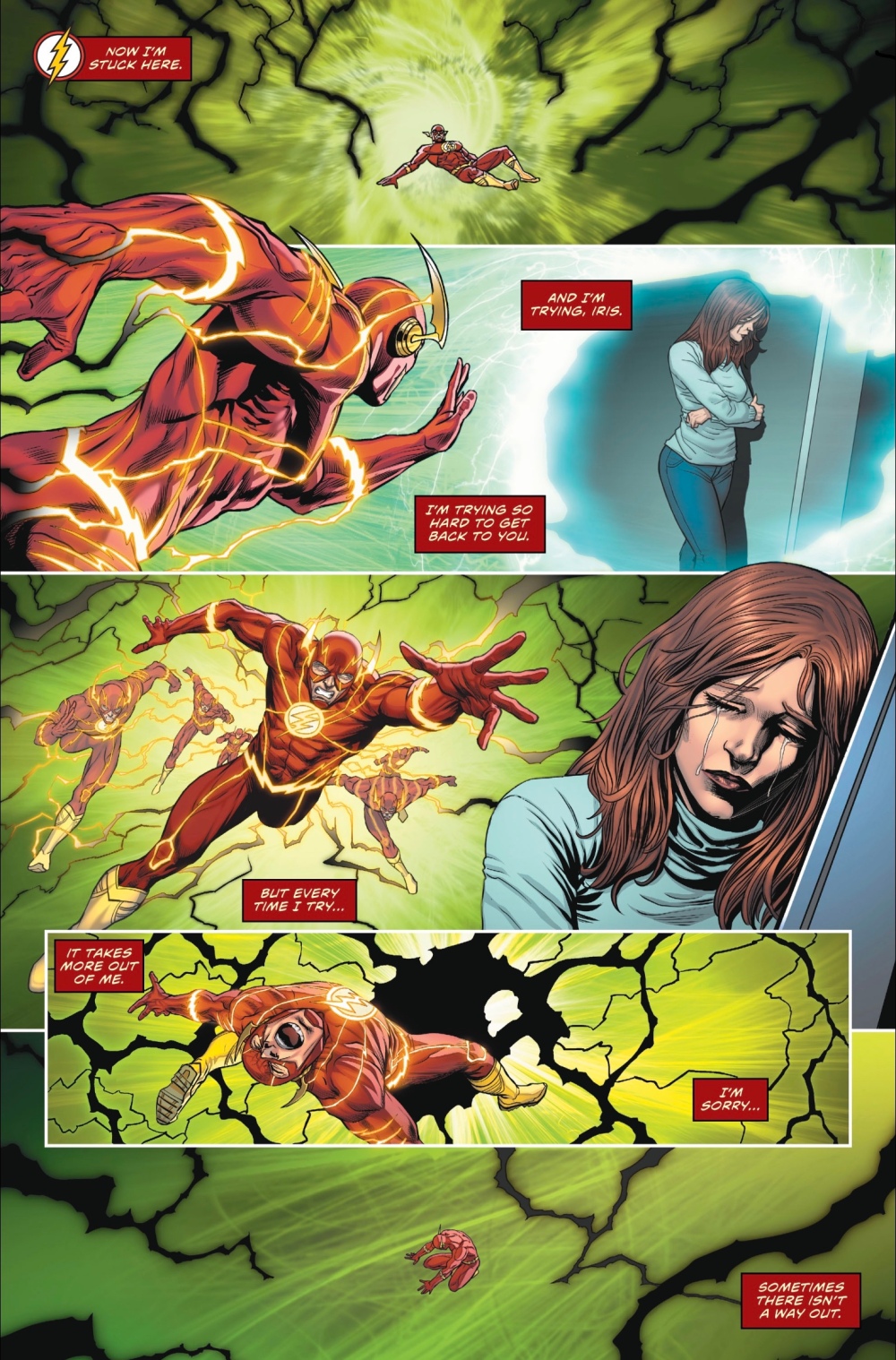 Christmas lights factor into a story of the aged Aquaman, as he’s asked by scientists to find a micro-organism that could give the embattled human race hope. Arthur Curry, of course, does his best, but things have changed in the ocean. Mairghread Scott writes, Dexter Soy draws, Veronica Gandini colours, Steve Wands letters and I enjoy… well, who doesn’t want a double-headed shark for Christmas?

I won’t say who stars in the next story, because it’s a reveal, and a nice one. I guessed, but that’s not the point of the tale, the point is capturing the hope that’s always accompanied this character, no matter how often someone at DC decides to darken them. I suspect this will be seen as a classic in years to come, thanks to Tom Taylor’s deeply humane script and luscious full-colour art by Yasmine Putri, working to layouts from the underrated Tom Derenick.

Old Outsiders enemies the Nuclear Family welcome the Nuclear Man into their home in a deserted fun park. Fifties throwbacks Dad, Mom, Biff, Sis, Brat and Dog are even more anachronistic than usual in this future Earth, and they need Firestorm’s help. Writer Paul Dini delivers a story that’s a pitch perfect blend of drama and humour, with a side of poignancy. Pencilling and inking, Jerry Ordway reminds us just how great an artist he is, capturing the android family’s bizarre ways as wonderfully as he characterises our hero. One touch I like is that Martin Stein’s headspace is an academic’s study rather than the usual foggy space-scape… it makes sense that after all these year’s Ronnie’s co-habitee has made the place his own. Kudos, too, to colourist Dave McCaig for some rather excellent conjuring of flame. Puffy sleeves on our hero, and this would have been perfect! 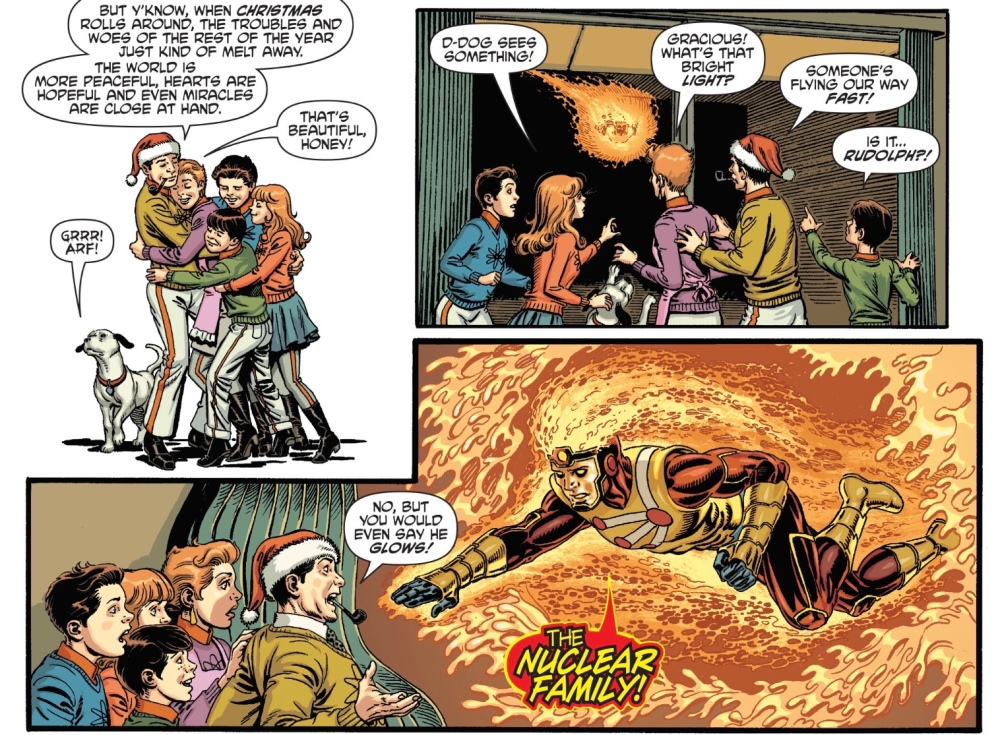 Did you know there’s a smartly written, beautifully drawn Kamandi ongoing series that we’ve not previously noticed? You might think so, at least, given the beautiful Kamandi short by writer/penciller Phillip Hester, inker Ande Parks, colourist Trish Mulvihill and letterer Steve Wands. It opens with a recap, ends with an assurance the story continues and in between is thoughtfully written, wonderfully illustrated entertainment as the Last Boy on Earth – a character tailor made for this special – meets a family of bears. Magic.

Catwoman is the Wolverine of the DC Universe, never able to resist a stray. Here she’s helping the late Holly Robinson’s daughter survive a post-Fall Gotham, trying to balance pragmatism with public spiritedness. The script by Cecil Castellucci is an authentic spotlight on Selina Kyle, while the art by Amancay Nahuelpan, with striking winter colours by Brian Buccellato, is a treat. 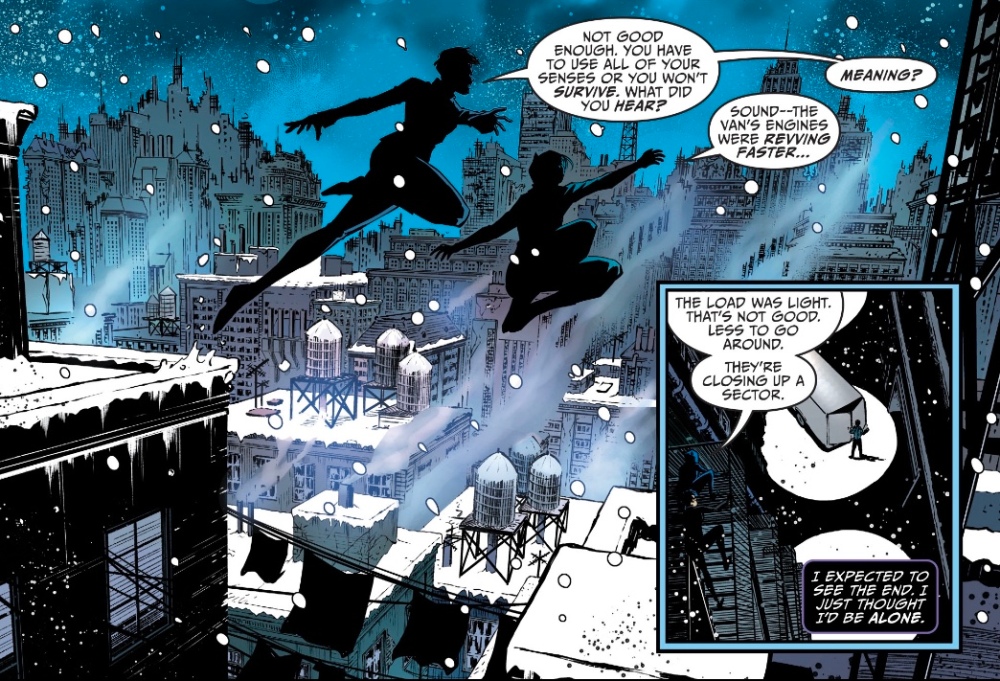 Once upon a time there was a Justice League. In years to come there’s another Justice League, mixing long-lived original members with brassy newcomers. And Green Arrow, an original, doesn’t think the younger set are taking life in post-war society seriously enough. Fans of the Satellite Era will likely get a big kick out of this revisiting of the relationships between Ollie and Hawkman, and Ollie and Black Canary. This gem is written by the issue’s co-editor, Dave Wielgosz, who really should let us see what he can do on a few more DC characters. Scott Kolins is a master of comic art and his work here is as pleasurable as ever, I especially like his new Hawkman design. And who knew Dinah Lance could still rock the fishnets in her, shall we say, prime? The emotions etched on GA and BC’s lined faces, the oddness of Carter’s mask, Kolins makes this world believable. And as coloured by John Kalisz, there’s a Stephen DeStefano vibe to the pages which I like a lot.

DC’s Nuclear Winter Special closes with the resolution to Rip’s tale, and I laughed out loud at the final lines. It’s the perfect capper to an unexpectedly cheerful book. I suppose the light really does shine brighter through the darkness.