It’s the final issue of Tom King and Mitch Gerads’ Mr Miracle maxi-series and I read it with a growing sense of dread; not so much because of events in the story but due to a fear they wouldn’t stick the landing.

The thing is, as I’ve said previously, I’ve bought every issue of this series but odd times have let two or three pile up before getting to them. I’ve appreciated the series more than enjoyed it. I’ve always found moments of pleasure in individual issues, but had to wade through pages of depressing events to reach them. I’m sure that for some people, a story extrapolating out from the darker aspects of Jack Kirby’s Fourth World masterpiece is pure pleasure. But I’m not that guy. Ultimately, I want optimism. This series began with Scott Free hospitalised after trying to kill himself, having slit his wrists. He told a curious public he was challenging his escape artist skills, seeing if he could escape Death itself.

Was this the truth? We soon learned best pal Oberon had recently died from cancer… had Scott given in to despair and decided, momentarily at least, to follow him? Since then we’ve seen Scott and wife Barda fight for the fate of Apokolips, have a baby, struggle to balance their everyday lives in LA with their responsibilities as New Gods. And every now and then the art has fizzed, hinting that everything isn’t as it seems. Scott’s memories of such little things as his wife’s eye colour are skewed. And one message is repeated. 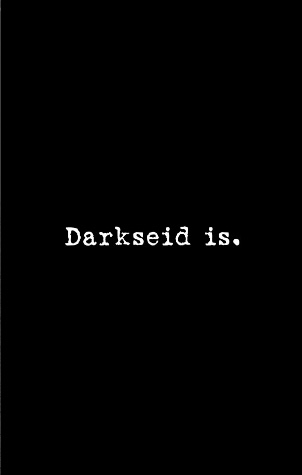 Well, Darkseid is dead by the start of this issue, killed by Scott. But after that happened, at the close of #11, the watchful New God Metron appeared to Scott, claiming that the reality he knows, the one we’ve followed in this series, is a lie… he belongs in the DC Universe of the New 52. Would Scott embrace this apparent truth, leave Barda and ‘Jolly Jake’ behind, and return to a different reality?

Nope. This issue open with Barda waking to find Scott in the shower, where he shaves off the beard he’s sported of late. I’m not sure of the symbolism of a clean chin, but this has to be a nod to Dallas, when Pam Ewing found that husband Bobby wasn’t dead after all, wiping out the previous season. What’s most interesting is a conversation he has with the ghost of Granny Goodness.

Or is that the living Granny Goodness communing with the dead Scott Free?

Later that day, on a visit to Apokolips, Bug also offers insight into Scott’s existence.

And later, the seeming spirit of Oberon has a more optimistic reading of events.

Whatever the truth, Scott decides he’s going nowhere. He’s staying with Barda and Jake, and looking forward to the birth of another baby, this time a girl. For now, at least.

So there you have it. Scott is dead. Out there, in the real world, there’s a Big Barda who’s mourning him, but he’s staying in Heaven/Hell with a fake family. So what if he can escape, he’s choosing not to.

Throughout this series Scott has been under the spell of this Barda, her pregnancies tying Scott’s ever more to this ‘reality’ (the second baby is conveniently conceived after Scott’s message from Metron might have him doubting his environs), constantly reassuring him she’s real, entreating him to stay… perhaps she’s a telepathic construct of his old enemy The Lump, there to keep Scott trapped, like a Black Mercy. Just look at the couple’s final exchange, now there’s sinister.

And despite the final blurb of this issue, I wouldn’t be at all surprised were a 13th instalment to suddenly appear and send Scott back into the current, official DC Universe, maybe as soon as the DC Rebirth/Doomsday Clock sequence is over. Heck, it could be Dr Manhattan trapping Scott for whatever reason – Jack Kirby created Scott as a Jesus Christ surrogate, we’ve seen crucifixion imagery in this run, #12’s cover has red roses – linked in art to Christ. Could a resurrection by Scott prove key to the future of the DC Multiverse?

Or is this really ‘just’ Tom King playing around with Kirby tropes, metafiction and presenting a really depressing perspective on love?

I honestly don’t know; this is a comic apparently (there’s that word again) designed to be discussed, and studied… but is it meant to be entertaining? There have been plenty of great dramatic moments, lots of sweet exchanges, the sheer craft of Gerads’ art and naturalness of King’s dialogue is wonderful, but overall I’m left feeling flat. I won’t say depressed, because Depression is a real thing, something bigger than me not loving a comic I definitely admire. But certainly, reading Mr Miracle #12 had me needing a cuddle from the cats

Escapism is the core of Mr Miracle and the point of most comics; if Mr Miracle isn’t allowed to escape – worse still, if he chooses not to escape because he’s seduced by a fake reality – what’s the point of him? Comic book tee shirts and superhero action figures have been a visual constant in this series – is King actually trolling the comic reader, suggesting we can’t cope with reality and will always choose the unreal world? Probably not, because he comes across in interviews and on Twitter as a pretty nice chap. But still…

Things I do understand include the bittersweet effect of Funky Flashman, quoting his inspiration Stan Lee, in the week of the comic legend’s death…

We also get familiar faces in Scott’s audience on page one, and some nice callbacks to the debut issue. The book looks gorgeous throughout, thanks to Gerad’s increasingly impressive full-colour artwork.

I love his alternate cover, it’s clever, striking and speaks to the story. The Nick Derington main cover echoes the first issue’s nicely, with Scott and Barda taking a bow, though the Female Fury looks far too skinny.

Overall, this has been an interesting experiment, but probably twice as long as it needed to be – a shorter length might have meant less room for existential angst and more emphasis on action. Having read a good amount of Tom King comics by this point, though, I’m pretty sure the questioning/miserabilist moments would have been the last thing to go.

As for the God of Evil, Darkseid is…