Meanwhile, on Long Island, where Kid Flash has called to tell the parents of teammate-for-five-minutes Roundhouse that their son is dead… 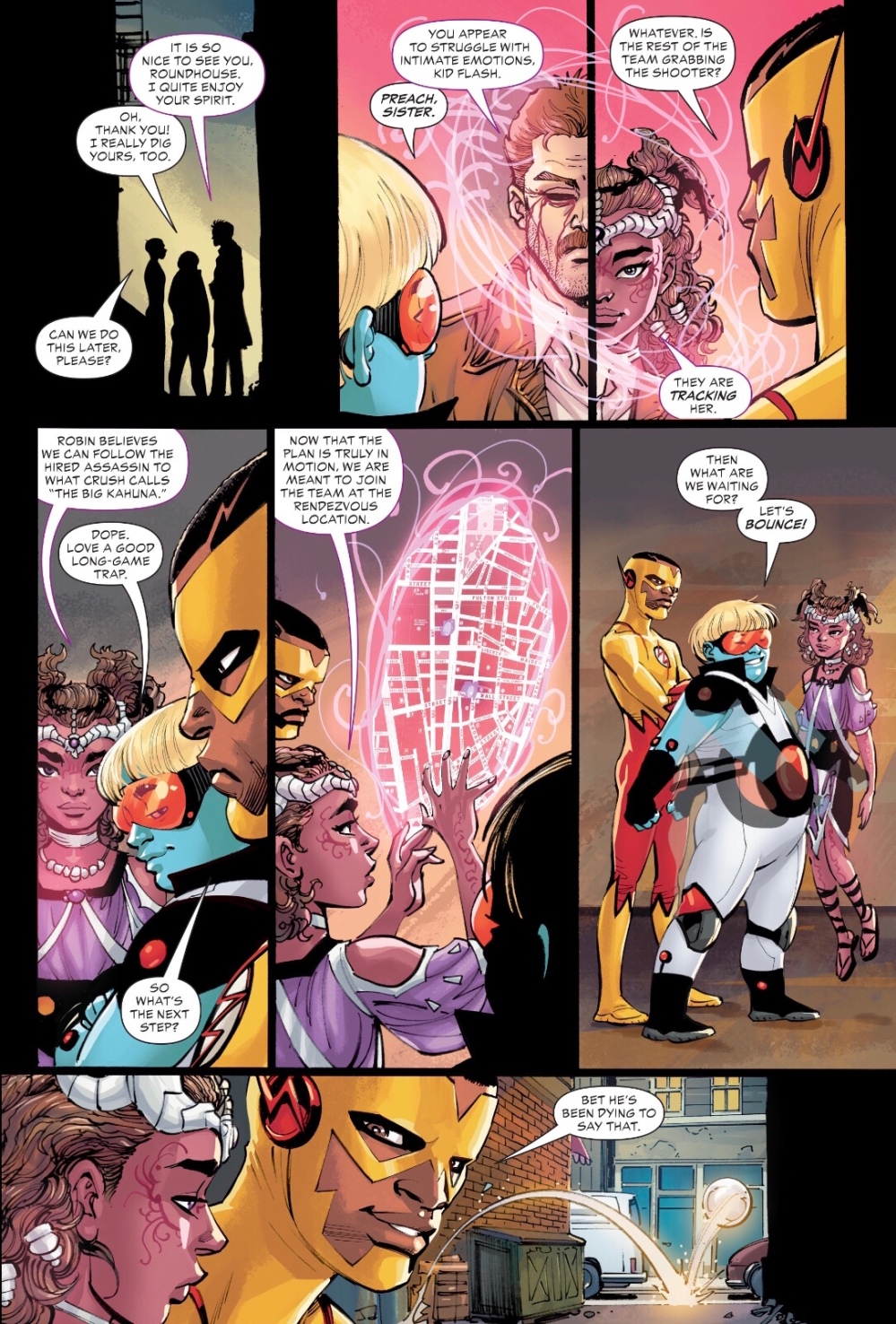 Having heard Gordon was a target, Damian Wayne had magical Titan Djinn take his place. As for the identity of the assassin…

Oh, it’s Lady Vic. Good old Lady Vic. How I hate her… an aristocrat, but oddly common in that she’s just one more globetrotting female assassin who should never be a threat to a super-team, especially one with a speedster on it.

Still, writer Adam Glass puts her to better use to anyone before him at the close of this issue, and I hope this turn for the character sticks.

Give it away? Naw, I want you to buy this book, so it survives, thrives and I get many more issues. Glass is giving a masterclass in New Teen Titans, showing how existing and new characters can become a compelling team by dint of fascinating individual characterisation and well-worked interaction.

Take the Roundhouse/Kid Flash scene. We see that Wallace West’s aggression is as much down to affection as it is discomfort (if you ever wondered about super-teen toilet habits…). We see, once more, that Billy Wu is a seriously smart kid. I’m still not sure I get his explanation as to how he survived a nuclear blast… the explosion shot him away before he could be melted? And Billy’s low self-esteem is evident in his not thinking anyone would care that he didn’t die.

Djinn narrates the story, letting us know more about her, and she just gets more interesting by the issue; the connection between her and Robin is especially intriguing. Maybe something to do with his background as a Son of the Desert?

Crush is providing enormous fun, but ‘Superman can bite me – I’m CRUSH!‘? How the heck could Glass resist her coming out with ‘It tickles’?

There’s nice continuity with this week’s Justice League Issue via a reference to the Bat-Cast (no, not something you find on a podcatcher), a sister who’s either dead of transitioned and the secret/revolting origin of Djinn. I enjoyed every page of this book, with the artwork of breakdown artist Bernard Chang and finisher Scott Hanna every bit as important as Glass’s story.

The characters have real, well, character, fully animated and with attitude to spare. The action scenes shine, while the conversations are compelling in a quieter way. My favourite panel sees bouncing boy Billy leap out of an annoyed Kid Flash’s way. 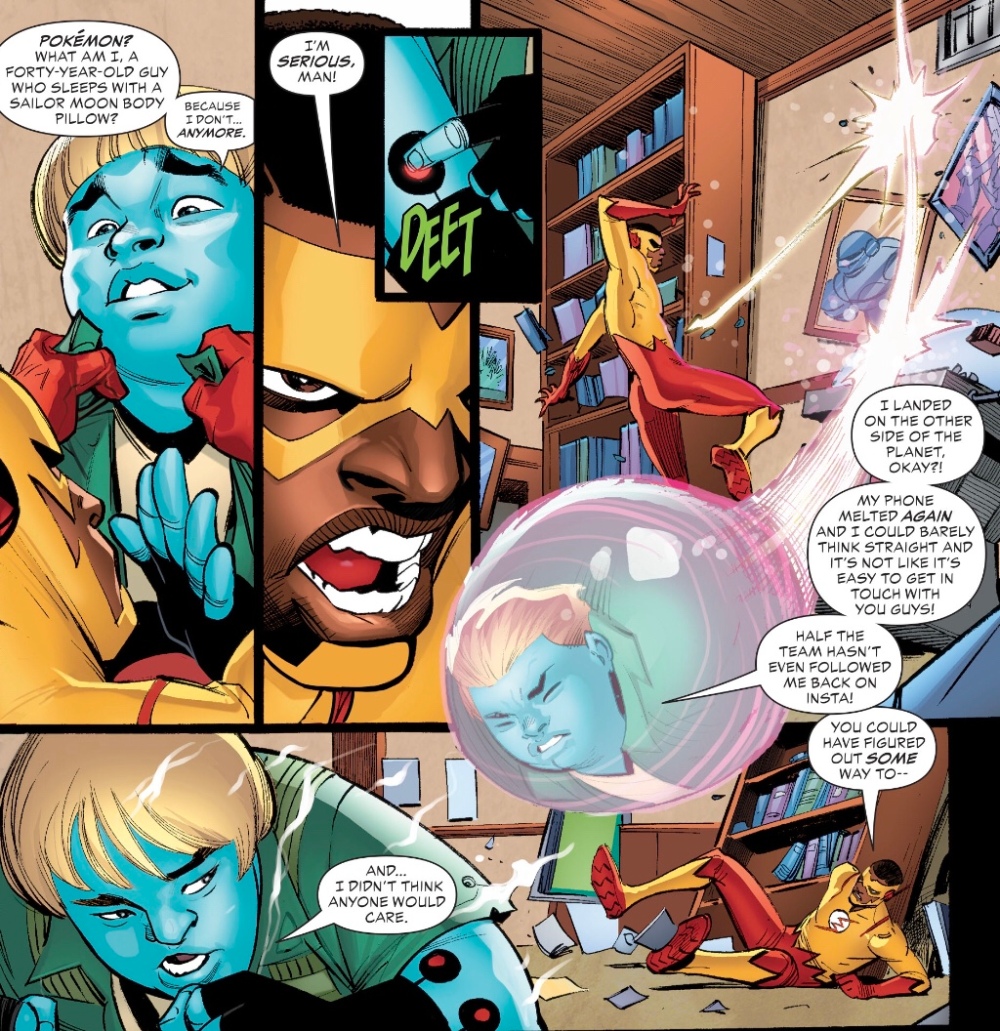 And just look at that colour effect on the rotund Roundhouse – he’s like a brilliant soap bubble, courtesy of colourhand Hi-Fi, whose other great work this time includes the glow of the GCPD squad cars, the suburbs where dwell the Wus, and Djinn’s magical energies, which I’d peg as amethyst in colour… hmm.

There are also some fabulous tones on the title lettering – Hi-Fi, or the very accomplished fontsman Rob Leigh? He certainly (certain-Leigh?) gets the credit for the playful shapes, while his work on dialogue and narrative boxes is as exemplary as ever.

The whole creative team is on fire, meshing marvellous, which means shout-outs must also go to editors Alex Antone and Andrea Shea for their efforts on this title – talent wrangling, quality control, production tasks… now, if only we could have a lettercol. And a half-decent logo, that New 52 leftover is dull dull dull.

There’s a splendid cover by Nick Derington, I like the limited colour palette (and suddenly it hits me as to why this book and Justice League #10 have similar approaches to colour – it’s Tin Foil Month… as a digital buyer, I had quite forgotten).

The alternate image of Robin is impressively executed in full colour, bar the head-to-body ratio. Given how talented artist Alex Garner is, I suspect he misunderstood a memo and thought it was Bobblehead Month.

Not a problem, this is a massively entertaining superhero comic. Buy it.