It’s been a year of great comics, along with the inevitable mediocre and just plain poor ones. Things that made a big impression included the energised Superman titles under the pen of Brian Michael Bendis (with the return of the Legion of Super-Heroes some compensation for the ageing up of Jon Kent and subsequent loss of the Super-Sons title), the latest big X-Men relaunch (as opposed to the seemingly annual ones) and the neverending Dark Metal/Batman Who Laughs nonsense. Batman and Catwoman never made it to the altar, Heroes in Crisis depressed fans everywhere and Marvel’s 80th anniversary proved a damp squib. I’d love to hear what you made of the year in comics, and any tips as to what I should have been reading would be welcome.

Meanwhile, here are ten of the comics that I’ll remember, in order of appearance – click on the highlighted titles for the original reviews. 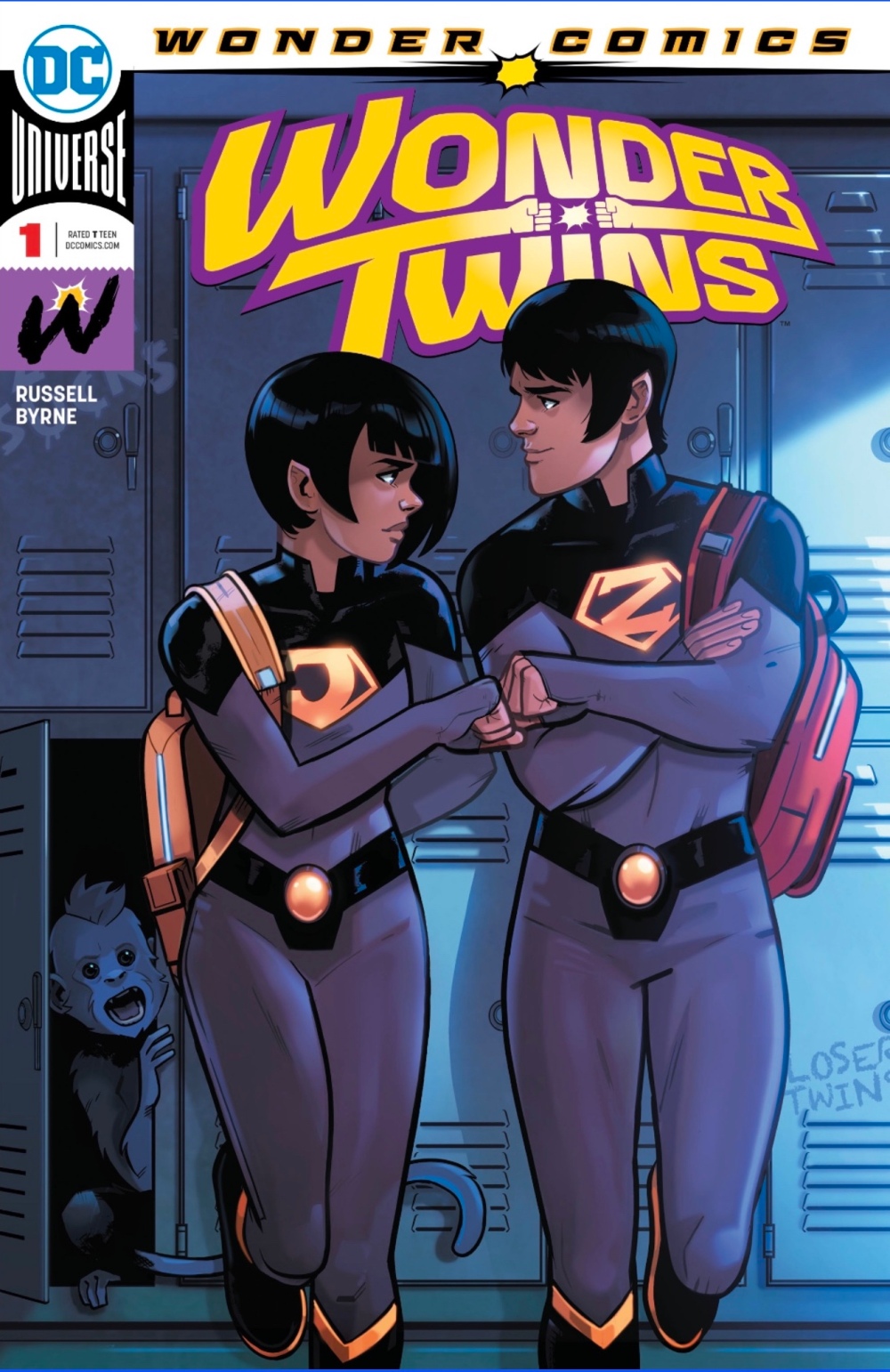 Wonder Twins #1 In the Seventies, Zan and Jayna were the second set of annoying kid sidekicks on Super Friends. This year they’ve been the centre of a heartwarming, satirical unique DC book from writer Mark Russell and artist Stephen Byrne, balancing the innocent with the knowing. 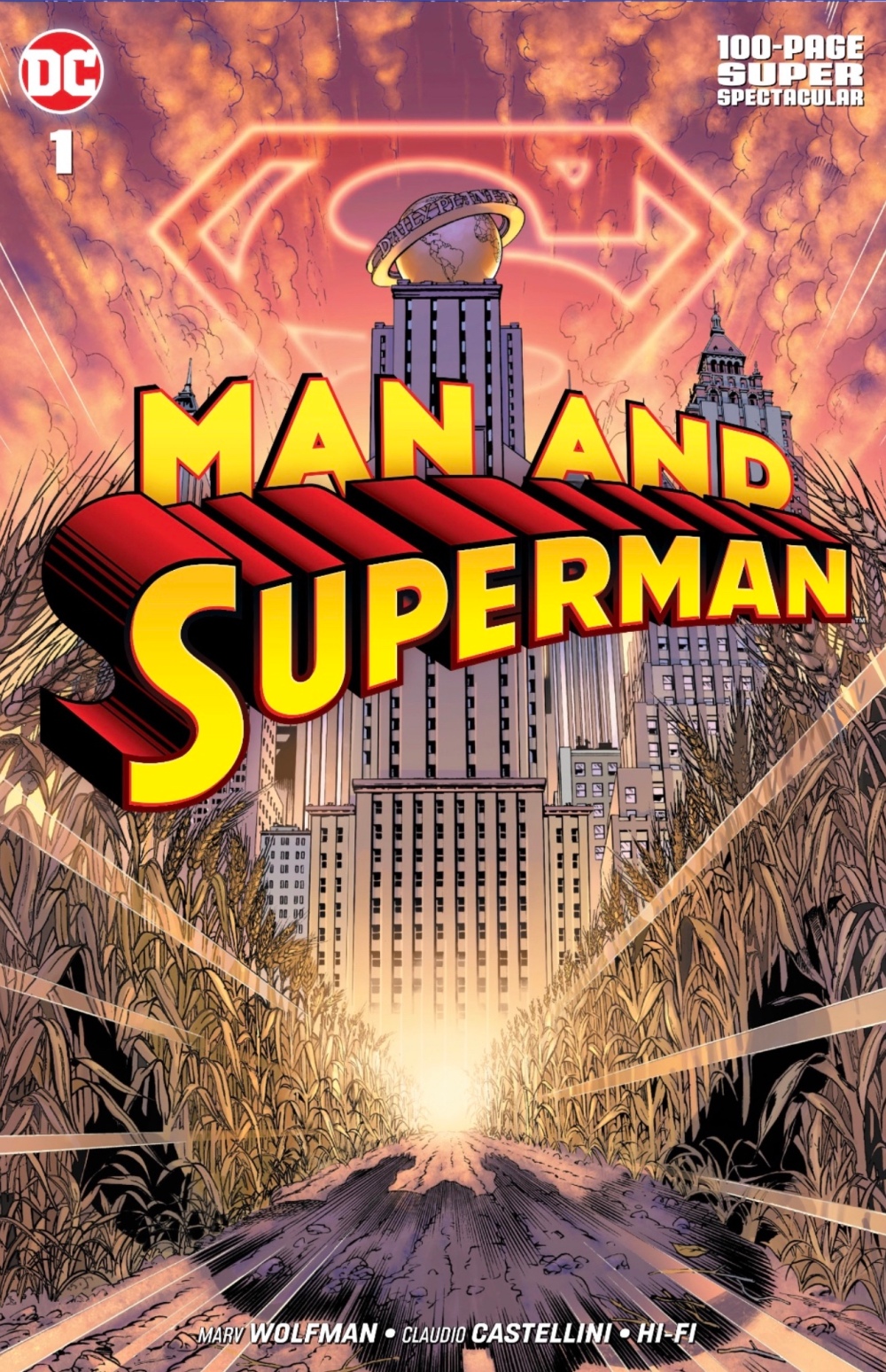 Man and Superman #1 No, not a comic book adaptation of the George Bernard Shaw play, but a 100pp Super-Spectacular collecting an unpublished story from the drawers of DC. It’s yet another take on Clark Kent’s first days in Metropolis, but this story by Marv Wolfman and Claudio Castellini, intended for the long-cancelled Superman Confidential series, is a great-looking, stylishly scripted gem.

Sideways #13 Among the ‘DC does Marvel’ titles launched in the wake of the Dark Metal miniseries, Sideways (think Spidey and Nova) was a bit of a gem – sadly this was the last issue  for teen teleporter Derek James, but creators Dan DiDio and Kenneth Rocafort went out with a bang.

Scooby-Doo Team-Up #95 The biggest loss for me this year was the cancellation of Scooby-Doo Team-Up after 100 digital and 50 print issues. Every instalment saw the Mystery Inc gang meet people from either the wider world of Hanna-Barbera or DC Universe. In this first of two digital parts – collected as one issue for the print version – Scooby and friends meet the Flash’s Rogues’ Gallery in a story that could slot easily into the late Bronze Age. It’s another funny, vibrant and smart delight from Sholly Fisch and artist Dario Brizuela. 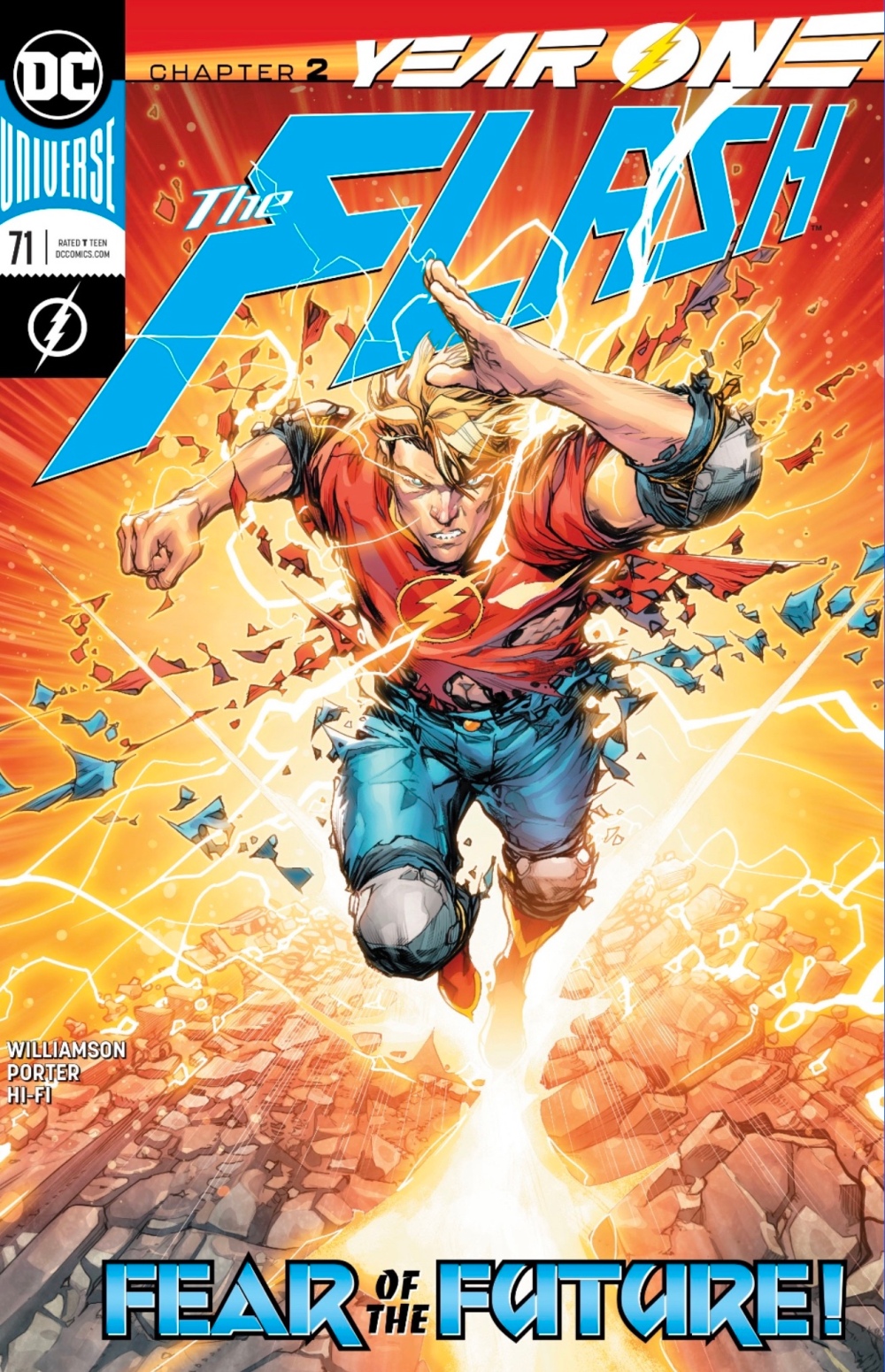 The Flash #71 Barry Allen, like Superman, has had his origin told a fair few times, but when this storyline interrupted the on and on and ongoing storyline about the new Forces that leaked into the DCU in the wake of the (yawn) Dark Metal business, I was thrilled. Not only did it provide blessed relief from such contrivances as the Still Force and the Sage Force, it proved an innovative, energetic update on the beginnings of the Silver Age Flash. Creators Joshua Williamson and Howard Porter’s story is so good that it even makes the Turtle threatening.

Action Comics #1011 Brian Bendis’s Leviathan saga was an engaging romp through the most clandestine corners of the DCU, even if the reveal as to who the mystery man destroying the world’s covert ops groups was proved to be a tad out of nowhere. This was one of the set-up issues, a confident, wide-ranging thrill ride that has Lois undercover in London meeting Tyger from the Grayson series, Amanda Waller in the Fortress of Solitude, Mr and Mrs Superman encountering Huntress, the Guardian getting a strange visitor in hospital and more. It’s an accomplished, entertaining comic from Brian Michael Bendis and Steve Epting.

Doomsday Clock #10 I’d been enjoying this offshoot of Watchmen by Geoff Johns and Gary Frank a lot when this blockbuster issue came along and elevated it – Dr Manhattan learns about the nature of the Universe and Superman’s place in it in a fascinating, great-looking thriller that also tells the smaller, but compelling, story of  conflicted film star Carver Colman.

Superman’s Pal Jimmy Olsen #1 Now this was unexpected – a take on the reckless red-headed reporter that perfectly melds his traditionally cooky character with the distinctly modern storytelling sensibilities of Matt Fraction and Steve Lieber. We’re now six issues in and the series is dazzling in the way it juggles seemingly dozens of story strands and plays with comic book structure.

Legion of Super-Heroes #1 Welcome to the 31st century Jon Kent, hope you survive the experience… actually, there seems little danger of anything bad happening to any member of this revamped version of DC’s future superhero team any time soon. Not if the happy tone of this debut issue by Brian Michael Bendis and Ryan Sook is anything to go by – it’s breezily scripted, joyously drawn and full of promise. 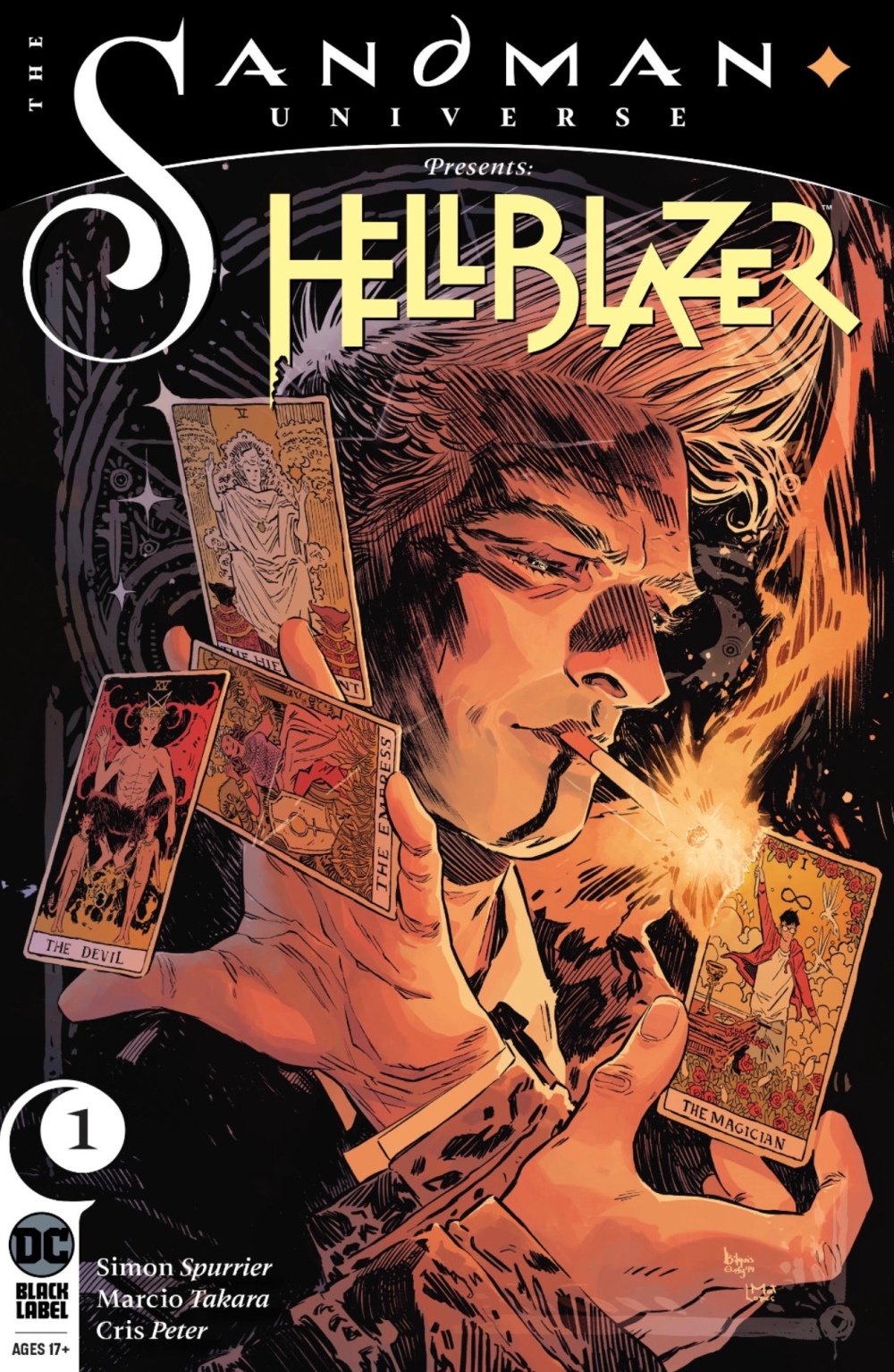 The Sandman Universe presents Hellblazer #1 Do you remember when John Constantine was a slightly sleazy backstreet warlock who didn’t shoot out bolts of magic alongside Justice League Dark? Well, the original and best version of the Hellblazer is back, courtesy of Si Spurrier ’s ingenious script and Marcio Takara’s mind-blowing art. Once again, magic has a price, and John’s prepared to pay it.

There are other issues that almost made the cut – Metal Men #1, Lois Lane #1, pretty much every issue of Scooby-Doo Team-Up, Justice League Dark Annual #1 and Inferior Five #1 – but let’s keep it at ten. I’m shocked that not a single Marvel comic made it – some of the early issues of the Jonathan Hickman X-Men revamp impressed me, but didn’t hit me in the heart. And apologies to the amazing colourists, letterers, editors and production staff who contributed to these titles, I namechecked writers and artists as they’re the prime creators, but these things are team efforts.

What were your picks of the year?