Boy, this is a packed issue. I’ve just checked the page count to see if it’s extra-sized, but no, it’s the standard-ish 22 sides you get in a $3.99 DC book these days. With a pacy script by Brian Michael Bendis that’s packed with intrigue and character, and sharply naturalistic art courtesy of illustrator Steve Epting and colourist Brad Anderson, I definitely got my money’s worth.

Leviathan Rising part 5 starts with a mini-adventure for the long-unseen vigilante Manhunter, as a joint Metropolis Special Crimes Unit and FBI task force invade the apartment of her alter-ego Kate Spencer, accusing her of being involved in the attacks on the world’s intelligence services and terror groups. This isn’t Kate’s first rodeo…

In London, Tiger, top agent of clandestine group Spyral, has something for an undercover Lois Lane.

Hoping to stand up the information, Superman and Lois seek out former Spyral agent the Huntress. 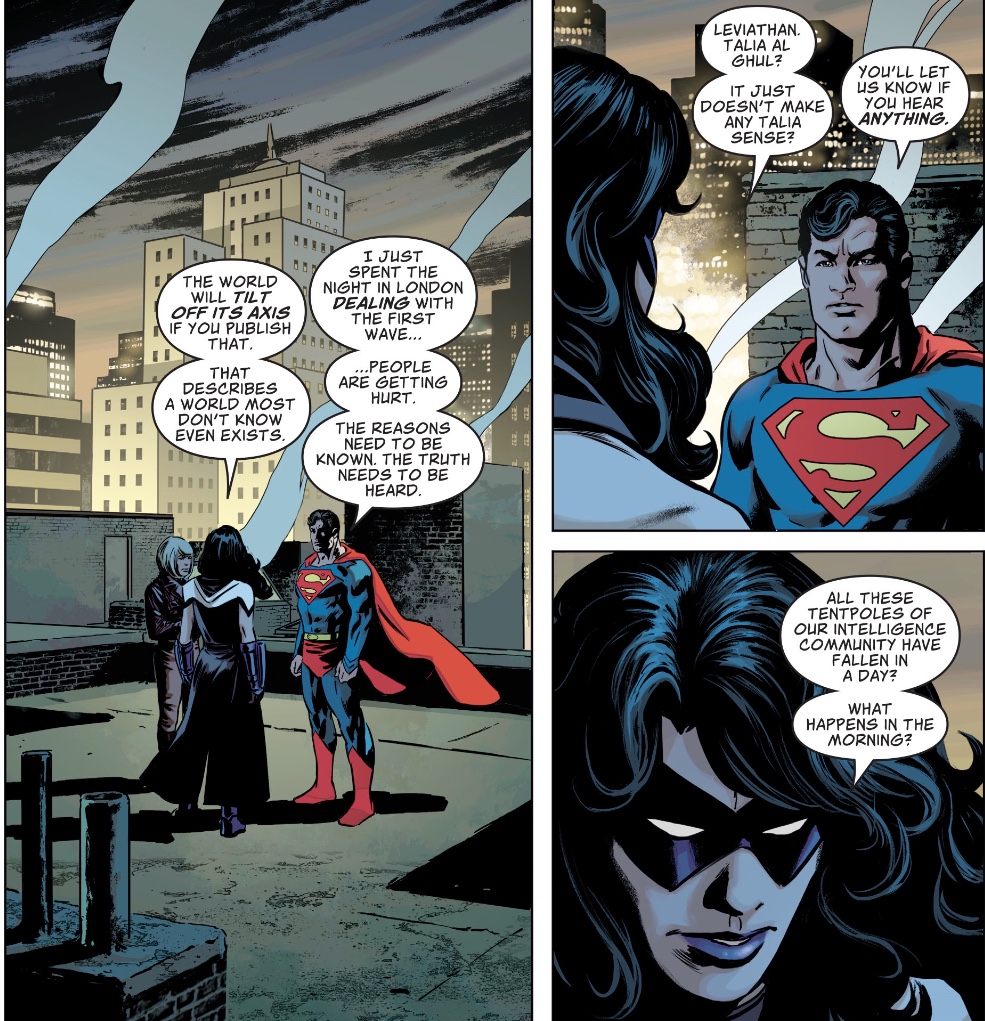 By the time they arrive at the Fortress of Solitude, houseguest Amanda Waller has gone.

And in Metropolis, a recently injured vigilante receives a visitor.

Manhunter. Tiger. Huntress. Guardian. All seamlessly woven into a story that’s getting bigger and more intriguing by the month. And I’ve not even mentioned a terrific bit of characterisation involving Jimmy Olsen after he, I assume, picks up on a slip of the tongue by Lois; a peek inside the mind of ace editor Perry White; and ongoing discussions about journalistic responsibility between Clark and Lois. Bendis has made Action Comics a fascinating mix of the street level and the fantastic, and I couldn’t be happier – he seems to have solid control of this story, it feels like the details are locked in and we just have to enjoy the ride. Every character Bendis touches, from Huntress with her understanding of Waller’s wiliness, to Manhunter and her, let’s say, complicated relationship with the law, shines. And they all look superb as interpreted by Epting, whether they’re in the shining Fortress or on the smoggy streets of London. Speaking of which, I love this bit of scenesetting.

I assume that’s the doing of Epting rather than always-excellent letterer Josh Reed. I just wish he’d carried on this approach through the issue, there’s something nicely cinematic about it.

Random nice touches include misnamed hack Robinson Goode still not getting how journalism works, and Lois, despite extensive experience as a passenger of ‘Superman Airlines’, needing a moment after being flown halfway across the globe at super speed.

Speaking of globes, is that a stylistic representation of the planet on the Leviathan creature’s chest? Probably not… whatever clues may be here, I’m likely missing; the chat with Guardian may contain something, but I got nothing! Anyone? There may be something around Lois’ typing in the Fortress being heard over the end of the Guardian scene… or it may simply be Bendis amusing himself with a filmic transition.

From Epting’s powerful cover (a homage to Jim Steranko’s iconic Hulk King-Size Special image?) to the final page tease for next month’s Event Leviathan Special, via the opening shot of Perry White’s desk detritus, this is a corker of a comic.