Superboy’s first day at ‘future college’ is proving eventful. Legionnaire Ultra Boy has grabbed the legendary trident of Aquaman from Planet Gotham to stop it falling into the hands of either the villainous Mordru, or his own father, a powerful man on the world of Rimbor obsessed with tracking down fabled objects of power. Ultra Boy – Jo Nah – has taken it back to Legion HQ on New Earth, but he’s been followed by goons known as the Horraz, Mordru’s agents. 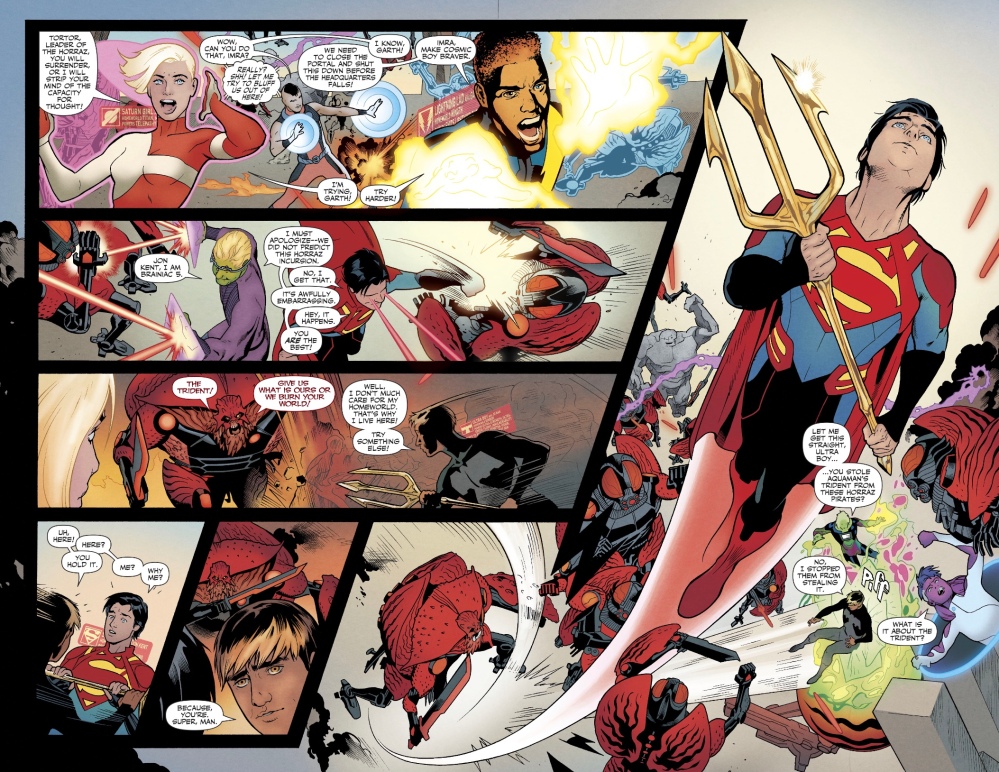 Their leader somehow bypasses a mental command from Saturn Girl to stop fighting and struggles with Jon Kent for possession of the trident, but the sparkling skewer seems to have a mind of its own.

Back on Earth, the Legion gather in Heaven – think the Nine Planets ice cream parlour from Adventure Comics #247, but a lot bigger – for an ‘official all-Legion strategy meeting’. Ultra Boy explains more of his background to his teammates.

Left behind to finally finish his 31st-century orientation package, Superboy comes up with what is, to him. a great idea…

… and we’ll see how that goes next month. For now, there’s plenty to talk about this time. For example, what’s up with all that water? Did a descendent of Aquaman somehow secrete away original Earth’s oceans as the world ended.

And what’s with Ultra Boy constantly referring to ‘Father One’? Does he have gay dads? Is there a mom in the picture? Moms? Others?

What happened to the Horraz, did the Legion manage to arrest them after the waters broke?

It’s good to see Rose Forrest aka Thorn has a job with the Legion, but what was the ‘great deal’ she had to share with them at the end of Millennium #2?

So, is that President RJ Brande, traditional Legion backer? If so, the attitude is certainly a swerve from what I’d expect…then again, it could be a relative with a different look to the traditional offworld Durlan image. I like the irony of UP visionary Jon’s presence possibly being what tips the UP leader over the edge.

‘Quayne-Galactic’? Sounds like there’s been a merger – or marriage – between Queen Industries and Waynetech.

Its’s amusing that during the battle the Legionnaires never turned off the Frichtman tech which flashes up everyone’s personal stats, meaning we see the words from various skewed angles. I do, though, feel an opportunity was missed in the Heaven scene for a go-round of everybody, letting each character introduce themselves in their own way. I understand that writer Brian Michael Bendis probably wants them introduced in an organic way as storylines allow, but with around three dozen characters, that could take quite a while. Hopefully we’ll get a proper guide soon, maybe in an annual. I want a good look at Monster Boy in action mode, for goodness’ sake!

Quibble aside, I enjoyed this second issue very much, there’s a lovely energy to proceedings, a pleasingly friendly tone and the action is pretty good natured too; I don’t doubt high drama will arrive, but I’m happy to get to know the new century and its chief players before all heck breaks loose. I like the splitting up of Legion members into sub-teams – that’s classic DC – and look forward to seeing how they get on. Saturn Girl – whose early activities gave this blog its name – is my current favourite character, with a couple of terrific moments here, but I expect others will soon rival her in my affections.

Ryan Sook’s illustrations – inked by himself and Wade Von Grawbadger – are once again spectacular, the layouts expansive in scope and individual characters either classically beautiful or otherwise fascinating. Every page, coloured with class and clarity by Jordie Bellaire, is something to savour. Jon Kent seems to be a favourite of Sook, with him appearing especially heroic, while Imra looks regal, but never haughty. Dave Sharpe’s letters are always splendid – extra points if he had to sort out all the Frichtman captions, and Interlac (more than four decades a Legion fan and I still can’t sight-read that UP language).

The cover is all Sook’s work – just stunning.

The bad news was that this issue was a couple of weeks arriving, which means the good news is that LSH #3 is due in just a couple of weeks. The future is getting closer every day and I, for one, am very happy.

7 thoughts on “Legion of Super-Heroes #2 review”