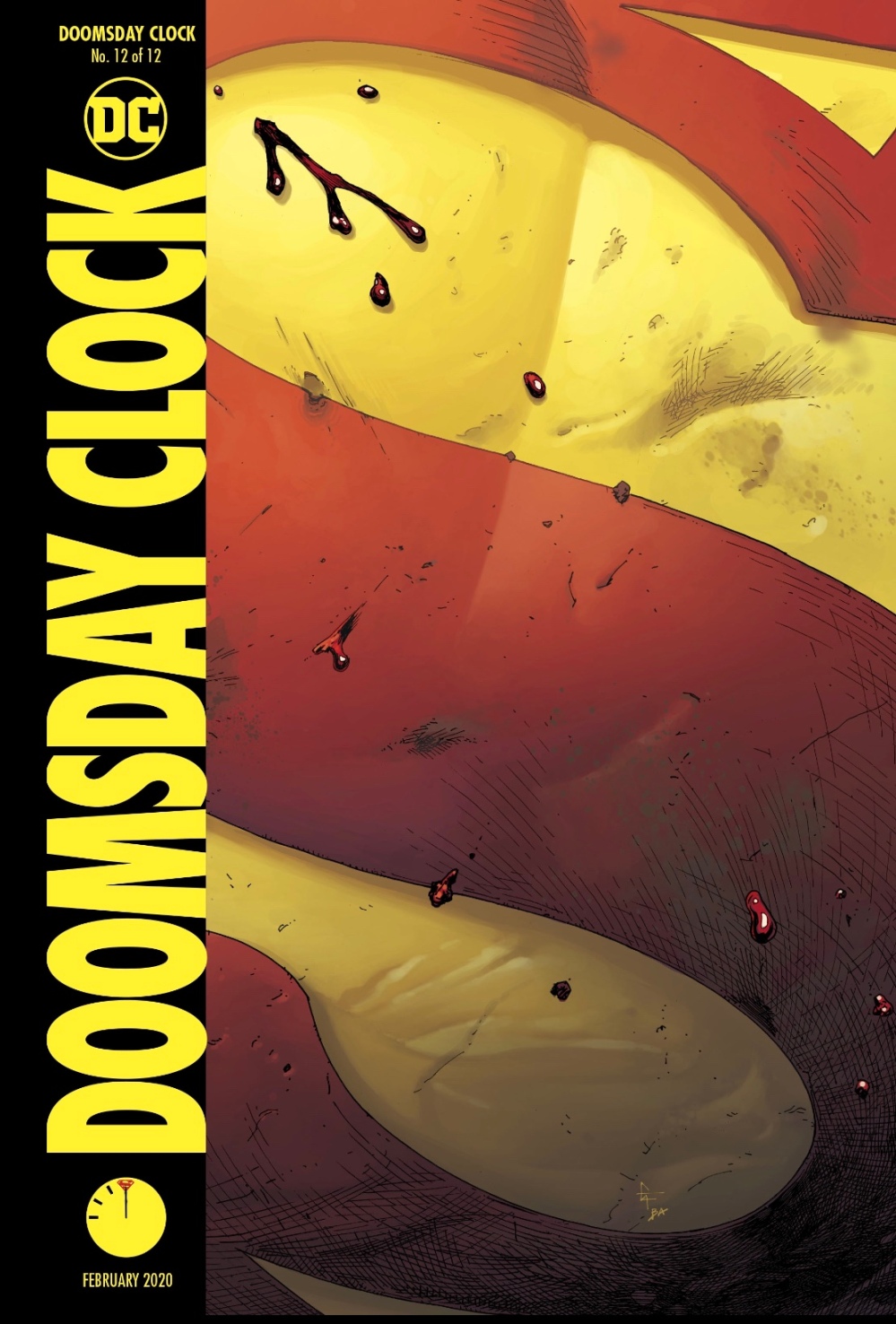 Yes, the return of the Canterbury Cricket, leading his World of Flashpoint comrades Mrs Hyde and Godiva, and fellow British heroes Knight and Squire, into battle.

There was other stuff too. The also long-awaited confrontation between Superman and Dr Manhattan. 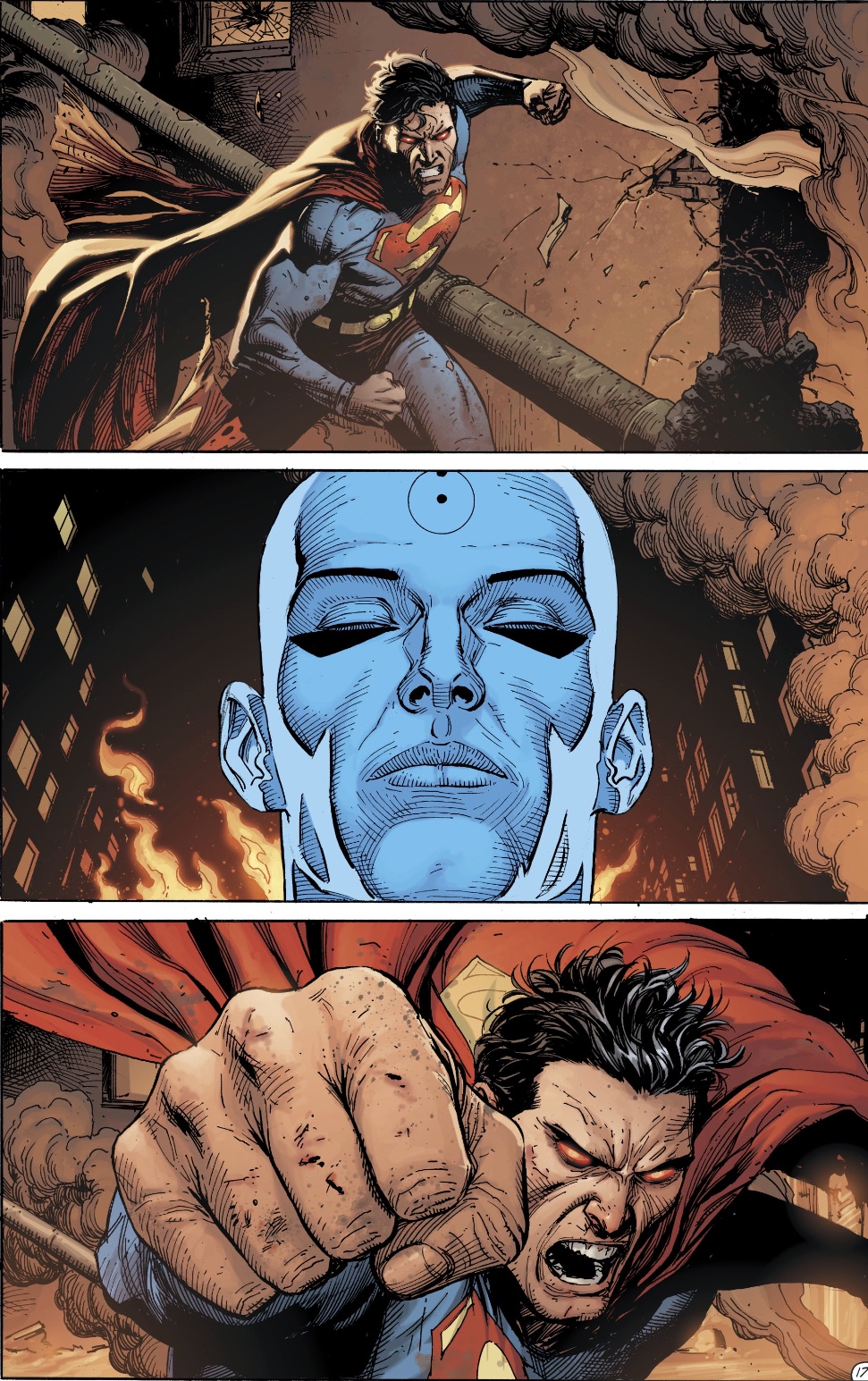 A fateful meeting between Batman and the second Rorschach. 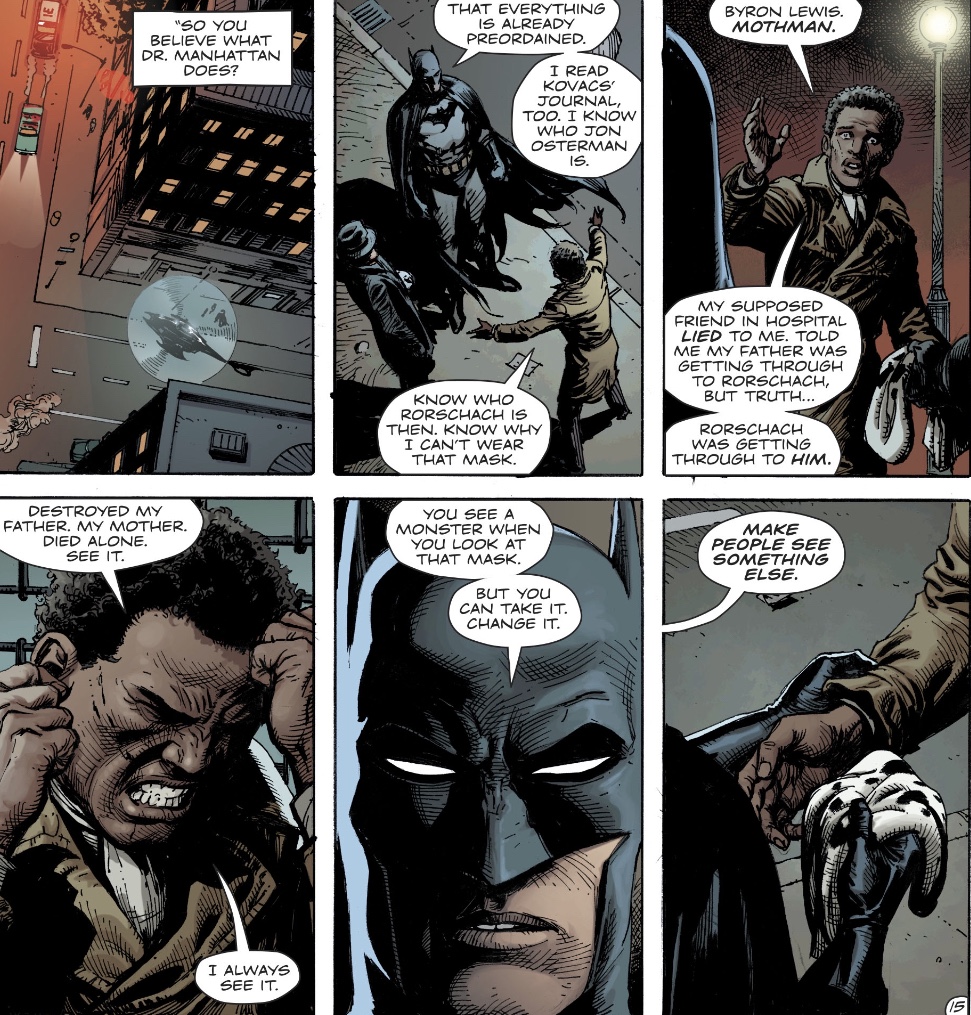 The final fate of Mime and Marionette. The return of the Thunderbolt. Whatever happened to Carver Colman. Oh, and..

… the return of the Justice Society of America and Legion of Super-Heroes.

In the case of the latter, mind, it’s as much a debut as a return, this being the latest version of the future’s greatest super team rather than a previous iteration.

The issue continues last time’s meditation on what Superman means to the newly named ‘DC Metaverse’ and the answer is… everything.

The parallels between Superman’s story and Moses have always been there; I’m less keen on Superman as messiah… still, writer Geoff Johns’ codification of Superman’s significance to DC Comics into in-universe super-significance will likely never be mentioned again. Likewise, the intriguing predictions about the future of the DC Universe. This story says the 5G business teased endlessly at the Bleeding Cool website isn’t coming next year, or the year after, but six years from now… to be honest, the 12th of Never would do nicely. You will notice that reference to Wonder Woman having fought alongside the JSA in the Second World War… that’s either the comics lining up with the hit movies, or John Byrne’s time travelling Hippolyta back in continuity.

What’s more likely to power future stories is another return by characters long gone, an undoing of a particularly cruel piece of meddling by Dr Manhattan.

Speaking of whom, I’m not sure what to make of the ending – he steals the son of Mime and Marionette (apparently OK as they’re already pregnant again) to be raised as a new kind of hero for his own world, a hero to bring hope, a cross between Superman and himself… a SuperManhattan. It’s meant to be a glorious new beginning, I guess, but strikes me as merely creepy.

Oh, and the Supermen Theory, which claims that Dr Martin Stein was part of a secret government project creating metahumans such as Metamorpho and Firestorm, is still out there, which has me frowning. But is there an implication here that it’s a load of pants? 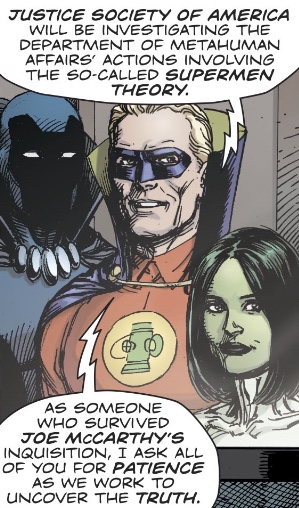 I enjoyed this series a lot. It’s extended the Watchmen story with excellent new characters Mime and Marionette, given us another look at Dr Manhattan, Ozymandius and the Comedian, finally putting a certain toy back in the box so as not to disturb the Alan Moore/Dave Gibbons classic. While I do have the odd quibble with the final issue, I appreciate that changes in the DC hierarchy meant Johns likely couldn’t wrap things up as originally planned. Overall it’s been an intriguing read with fantastic visuals by illustrator Gary Frank, colourist Brad Anderson and letterer Rob Leigh – the nuanced expressions, expansive and action-packed spreads, sharp colour palette and letters recalling Gibbons’ own in Watchmen. Johns’ story would never have been as successful without such talented partners.

And best of all, it’s explained and resolved the DC Rebirth problem, bringing back some of the most glorious concepts in the company’s lore. I’d say Doomsday Clock has been a good time.