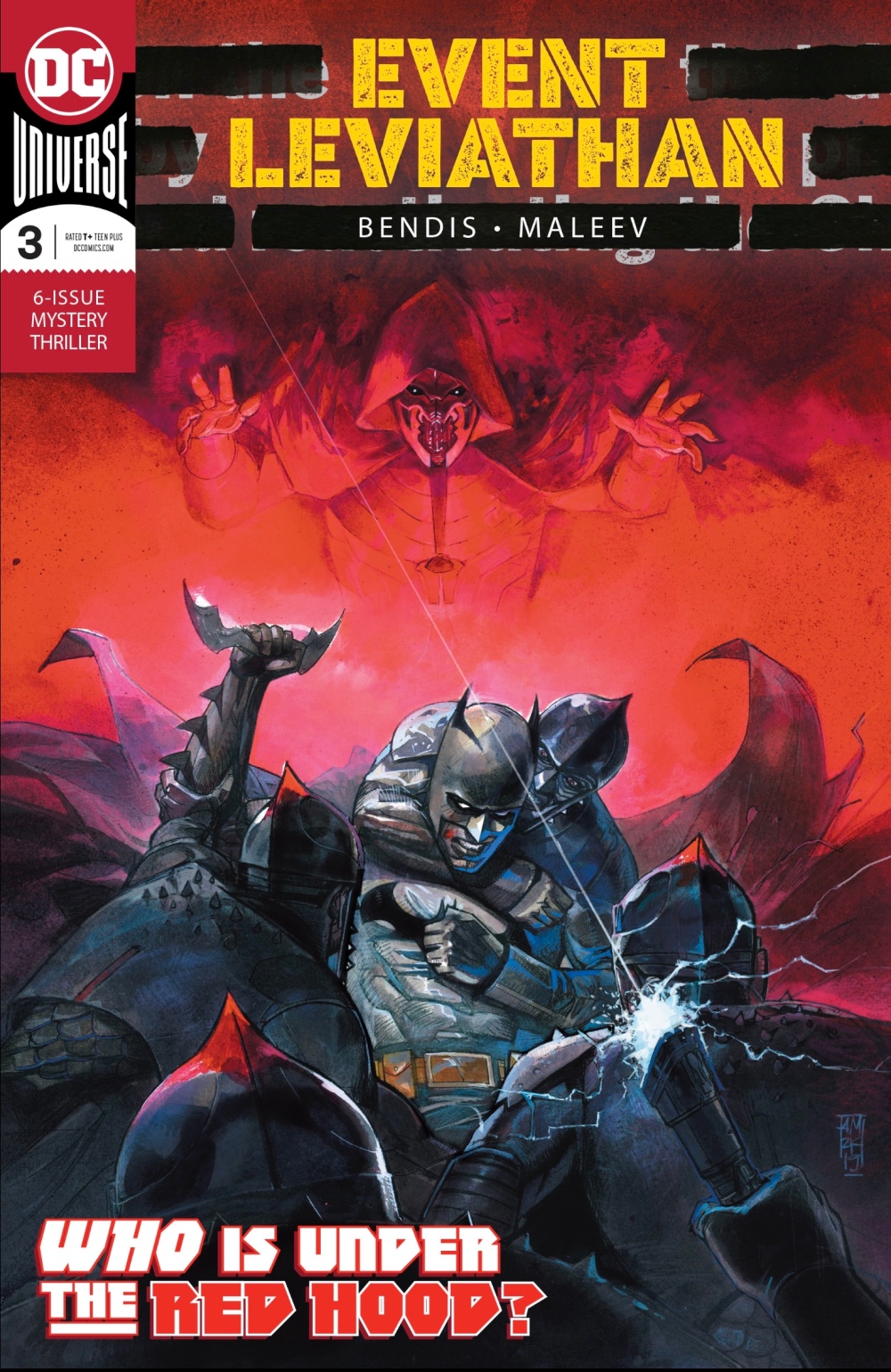 In Superman’s Fortress of Solitude, the self-proclaimed ‘world’s greatest detectives’ gather to solve the mystery of Leviathan, the shadowy figure who’s been taking down the planet’s most powerful security and criminal organisations.

Some time earlier, Jason Todd, the anti-hero known as the Red Hood, is leaping off a city roof, chased by those same superheroes – former colleagues who suspect him of being the mystery manipulator, Leviathan. 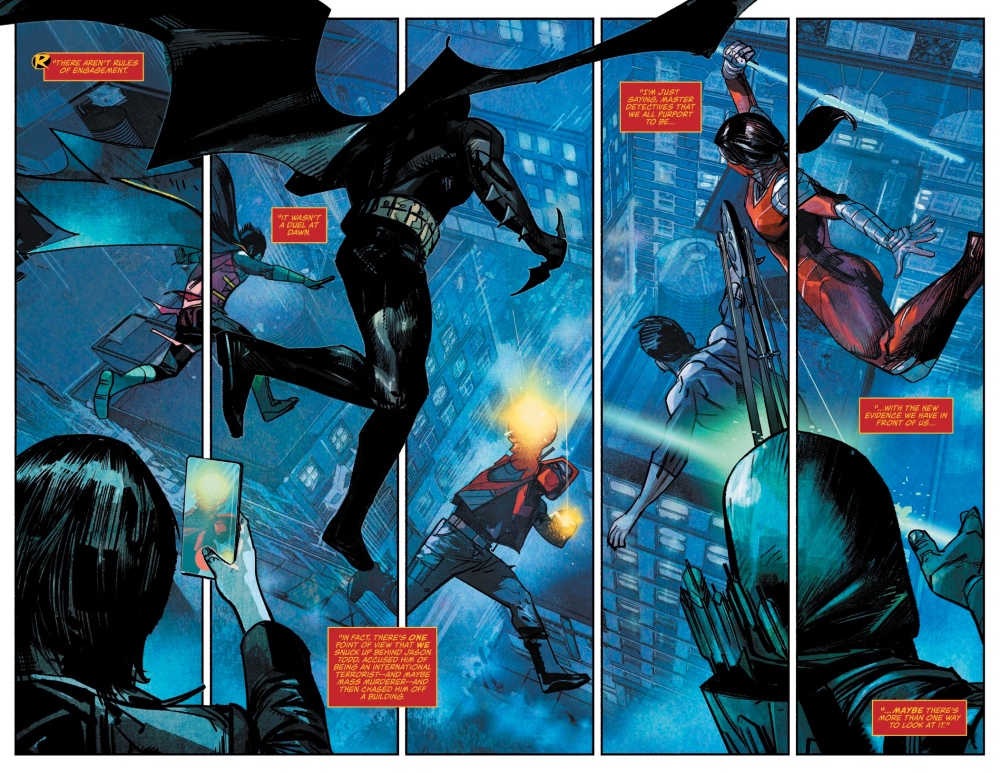 Also present is Lois Lane, who manages to have a word with Jason during a quiet moment.

Well, that was fun. Writer Brian Michael Bendis and artist Alex Maleev have produced another fast-paced chapter of DC’s mystery thriller mini-series, adding a little sauce to the pot. Specifically, Jason’s pointing towards Waller as the focus of Leviathan’s crusade. If he is Leviathan – which I don’t believe for a minute, Jason Todd isn’t a big picture guy – he’s doing well to divert attention away from himself. If he’s not, well, he’s given the detectives a nugget they really should have discovered themselves.

The thing is, Batman, Manhunter, Plastic Man, the Question, Robin and Green Arrow (I still have no idea why Ollie is suddenly considered a sleuth) really aren’t impressive as mystery analysts. They banter a lot, but don’t get to the core of the problem, or come up with suspects beyond those Leviathan has set up. Only Lois Lane impresses with her questioning of Jason – something that comes to an abrupt end when her costumed colleagues catch up to them.

It’s still weird that one of the DCU’s proven brilliant gumshoes isn’t here – Ralph Dibny – but Bendis does at least namecheck the Elongated Man in the room. 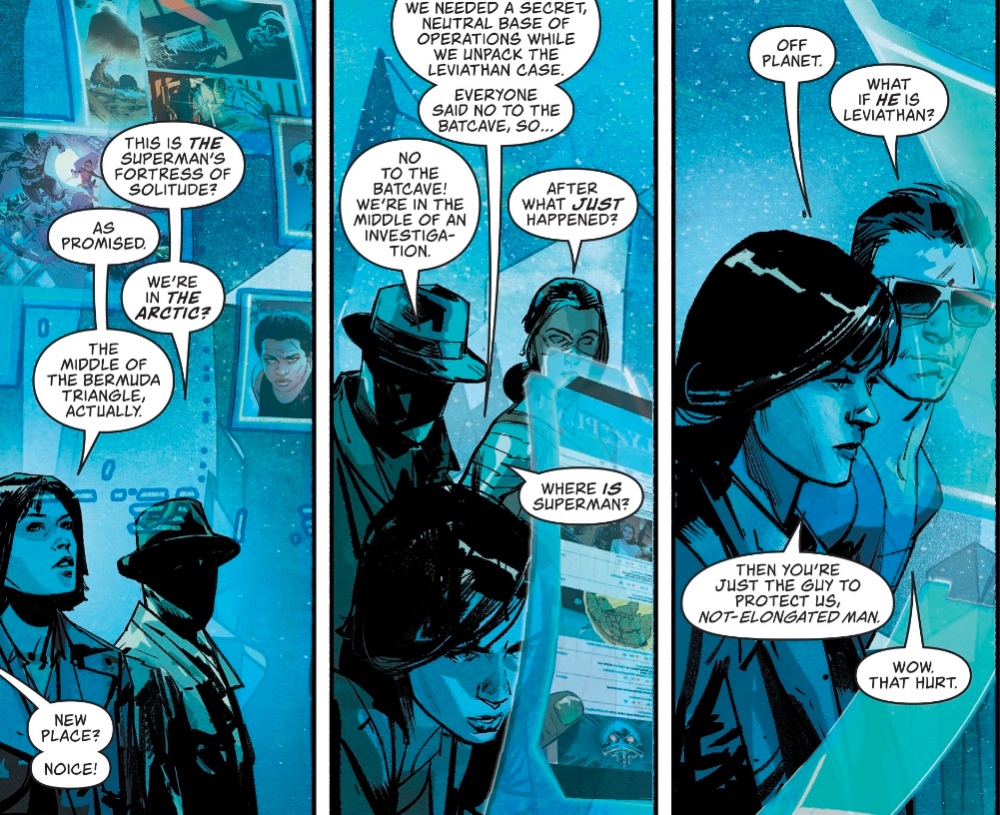 Hey, maybe he’s Leviathan! No? Still, we do perhaps get a clue as Waller faces Leviathan. 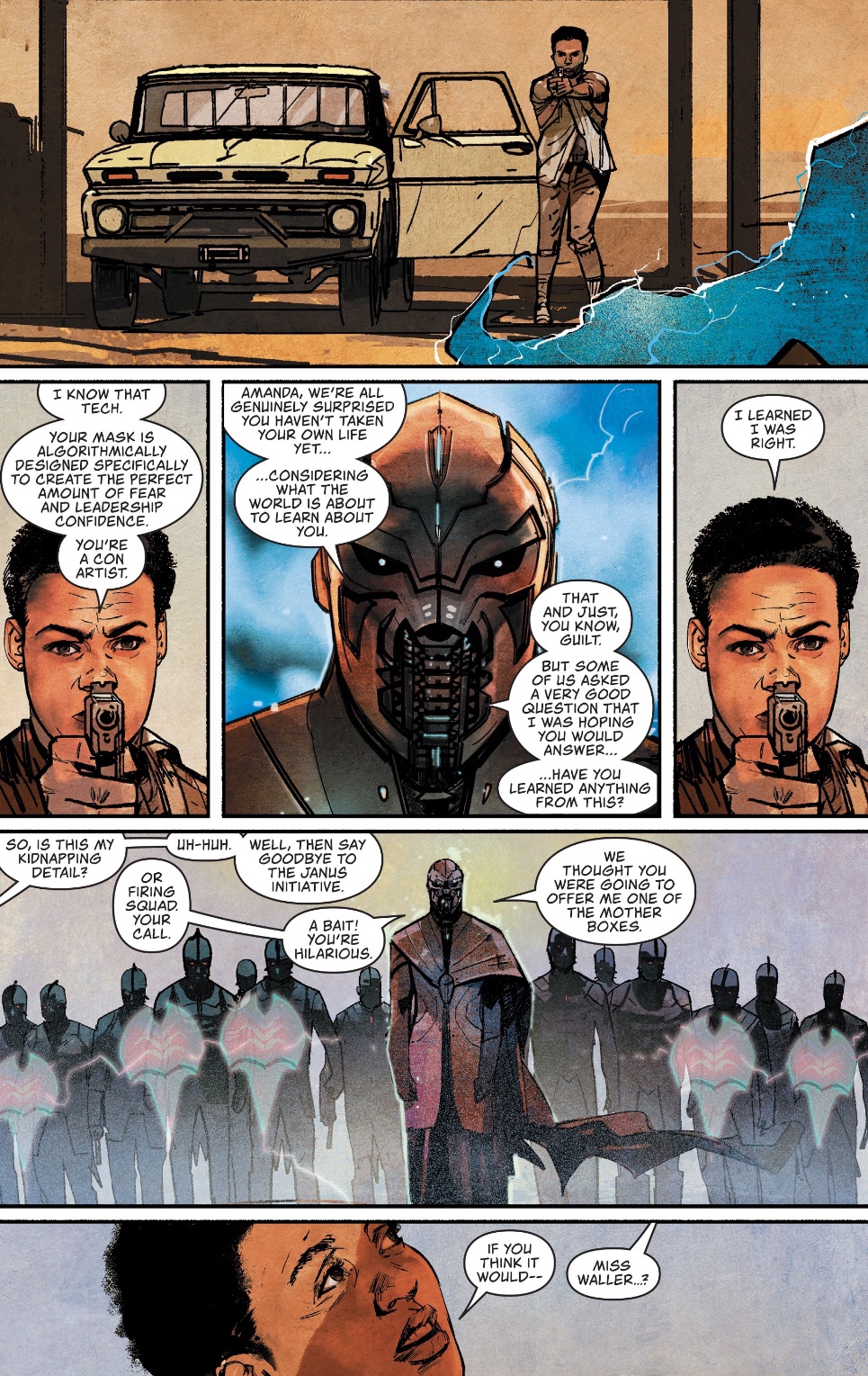 A hi-tech helmet. The ‘Janus Initiative’ – a reference to long-ago DC crossover the Janus Directive. One of the characters involved in that storyline was Peacemaker, whose helmet resembles those worn by Leviathan’s lackeys. Peacemaker, a pacifist so devoted to peace that he’d commit acts of violence. As for Leviathan’s constant use of ‘we’ and ‘us’, I give you this from Wikipedia: ‘Becoming a particularly deadly vigilante who would kill at the slightest notice, he begins to believe that the ghosts of the people he killed, or who were killed in his vicinity, are collected inside his helmet and can offer him advice and commentary.’ 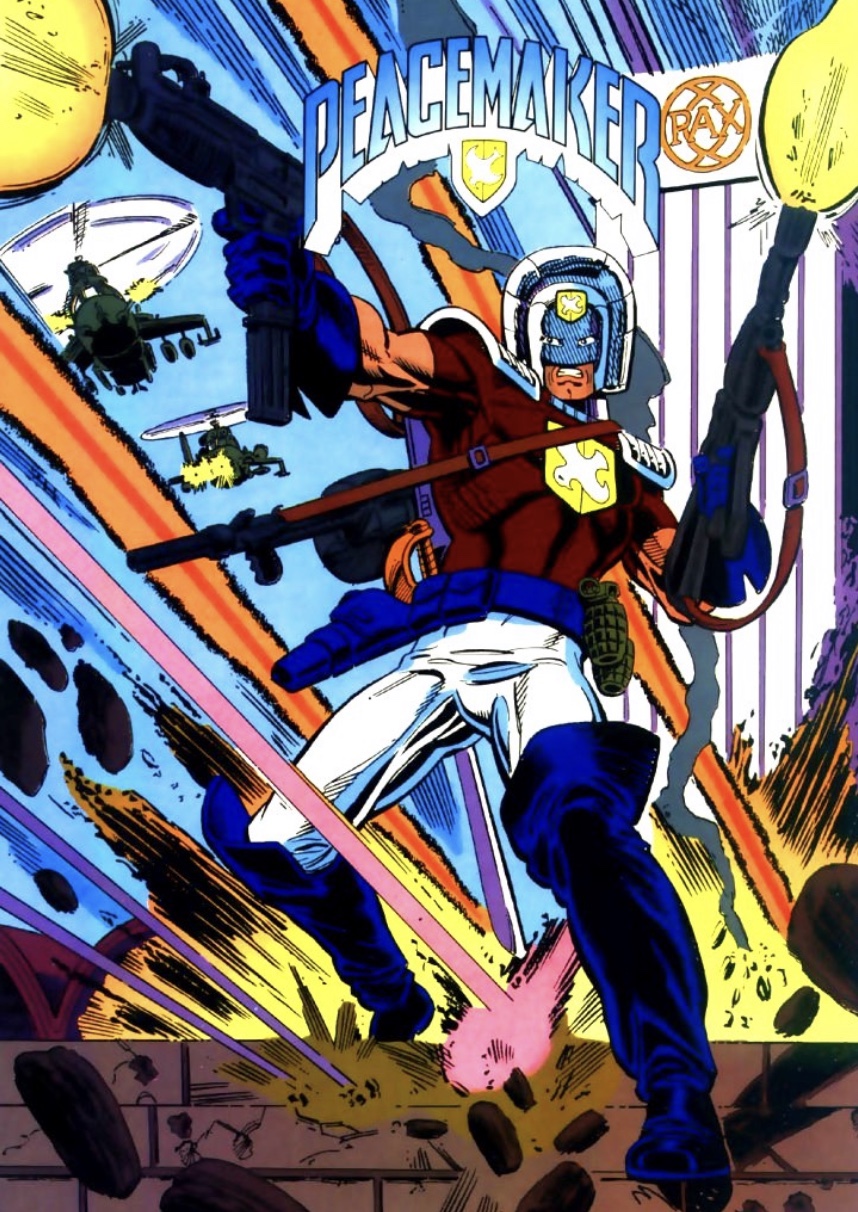 And he’s certainly someone who knows his way around the DCU’s spy groups, good and bad.

Hmm… is Leviathan Peacemaker with a more extreme approach? I wouldn’t mind, all I want is a solution to the mystery that makes sense.

Meanwhile, I’m enjoying Bendis’s story, while the full-colour art by Maleev is a real treat. His mastery of murkiness is perfect for a story set in the darker corners of the DCU, and his cinematic framing serves the narrative. That set-up shot of the detectives leaping after Jason, for example, is drawn as a spread but split into panels for pacing purposes – it looks good and it carries the reader forward. Maleev isn’t a one-trick pony, though, maintaining the suspense as the story moves into the light of South America. And I love the recap page – the icons at the bottom have me intrigued. The letters by Josh Reed are understated, just right for a book in which splashiness is the exception.

Maleev’s cover is interesting, positioning Leviathan as a mystic figure rather than a science super-person. Hmm, maybe Batman Bond villain Ra’s al-Ghul is under that mask?