Jonathan Hickman is writing two fortnightly X-Men books, with each informing the other. And a pattern is emerging. House of X is a fun comic, Powers of X is the homework.

And so it is that today’s issue of Powers of X ran the gamut from intriguing to dull, proving occasionally hard work.

The first, shall we say, chapter is my favourite. Charles Xavier and Moira McTaggert ask Magneto to join them in a new project.

Last week’s House of X gave us the background to understand the appeal made to Magneto and was a cracking read. The discussion between the three – mutant leaders from opposing philosophies and the world’s foremost expert in homo superior science – is fascinating.

Jumping ten years, we see Professor X and Magneto have built their mutant civilisation, Krakoa, but they face a massive threat.

In Year 100, mutant rebels are continuing their fightback against the evil Nimrod the Lesser. 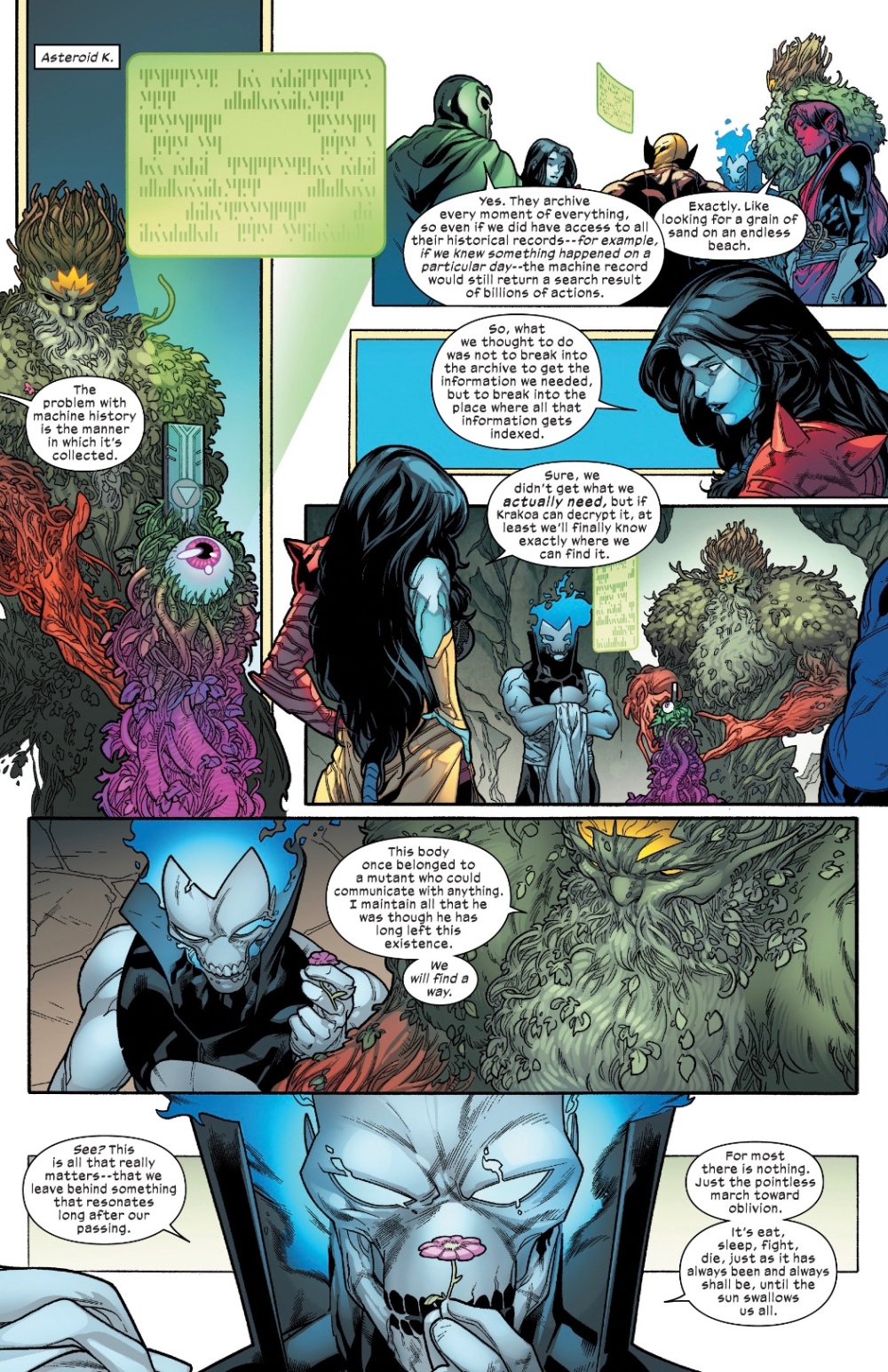 And 900 years after that, the Librarian and a teeny tiny Nimrod are planning the next stage of Earth’s evolution.

The last two chapters failed to engage me – I’m just not interested in the far-off future of the X-Men. By all means, show me what happens with Moira, Charles, Magneto and co’s latest attempt at making the world a better place for mutants, but slowly; let me be with the story as it happens – don’t show me that it’s already failed. The more obscure the language gets, the more it’s like listening to Miss Othmar.

As for the text pages that pop up, I almost fell asleep. I know some people love superhero pseudo-sociology but I simply cannot be bothered. I read books when I’m in the mood to read books; when I’ve bought a comic it’s because I want words and pictures to come together to tell a story. If you’re going to throw a text page in there, make it fun, with information that can’t be conveyed in comics form. This isn’t humorous Hitchhiker’s Guide to the Galaxy stuff, or Paul Levitz-style Encyclopaedia Galactica snippets, it’s terribly dry.

Hickman’s skill isn’t in doubt, I’m sure he’s achieving what he wishes to… his approach simply doesn’t chime with me in Powers of X. The early scenes work, but the future stuff is too distant. This isn’t the Legion of Super-Heroes, where the future setting is a buy-in – the X-Men in the present day is what I want. It’ll be interesting to see what happens after the two mini-series end… will the resultant X-Men line feel more HoX or more PoX? Or a mixture or both?

Something I’ve no qualms about is the art of RB Silva, with some inks by Adriano Di Benedetto and the colours of Marte Gracia – everything looks crisp and lovely, with particularly strong work on Magneto, there’s an imperious power to him. And a scene that doesn’t end at all well for two characters is presented with understated humour by the art team – and that’s a moment set in the future, so it’s not like all the far-off stuff is dull… more of this kind of thing would really help.

While the text pages aren’t my cup of tea, they’re sharply presented – I’ve been assuming that’s designer Tom Muller’s hand, but it could be Hickman himself, it’s not like he doesn’t have form. Silva and Gracia’s cover is very nice, it’s a shame only Magneto features in the book (is Sabretooth a giant or are we in a montage?).