If ever a Marvel comic has had more concepts in a single issue, I’d be surprised. Eternals. Inhumans. Abstracts. Mutants. The list goes on. But story? Not so much. There’s nothing, really, to review in terms of fresh narrative. This isn’t an organic tale, more incidents tagged together to make a timeline. As the title implies, History of the Marvel Universe is a very belated equivalent to the History of the DC Universe from 1986.

That book had the Harbinger character from Crisis on Infinite Earths revealing the new company timeline following a Multiverse-shaking cataclysm. This has Galactus – a character much more fleshed out than the then newly created Harbinger – recapping the whos and whats and whys and wherefores of Marvel. While Galactus has lots of history, though, he’s not the greatest character – no personality to speak of, and when writers try to use him as anything but a giant threat – as Al Ewing did in his Ultimates series – Galactus seems lost. 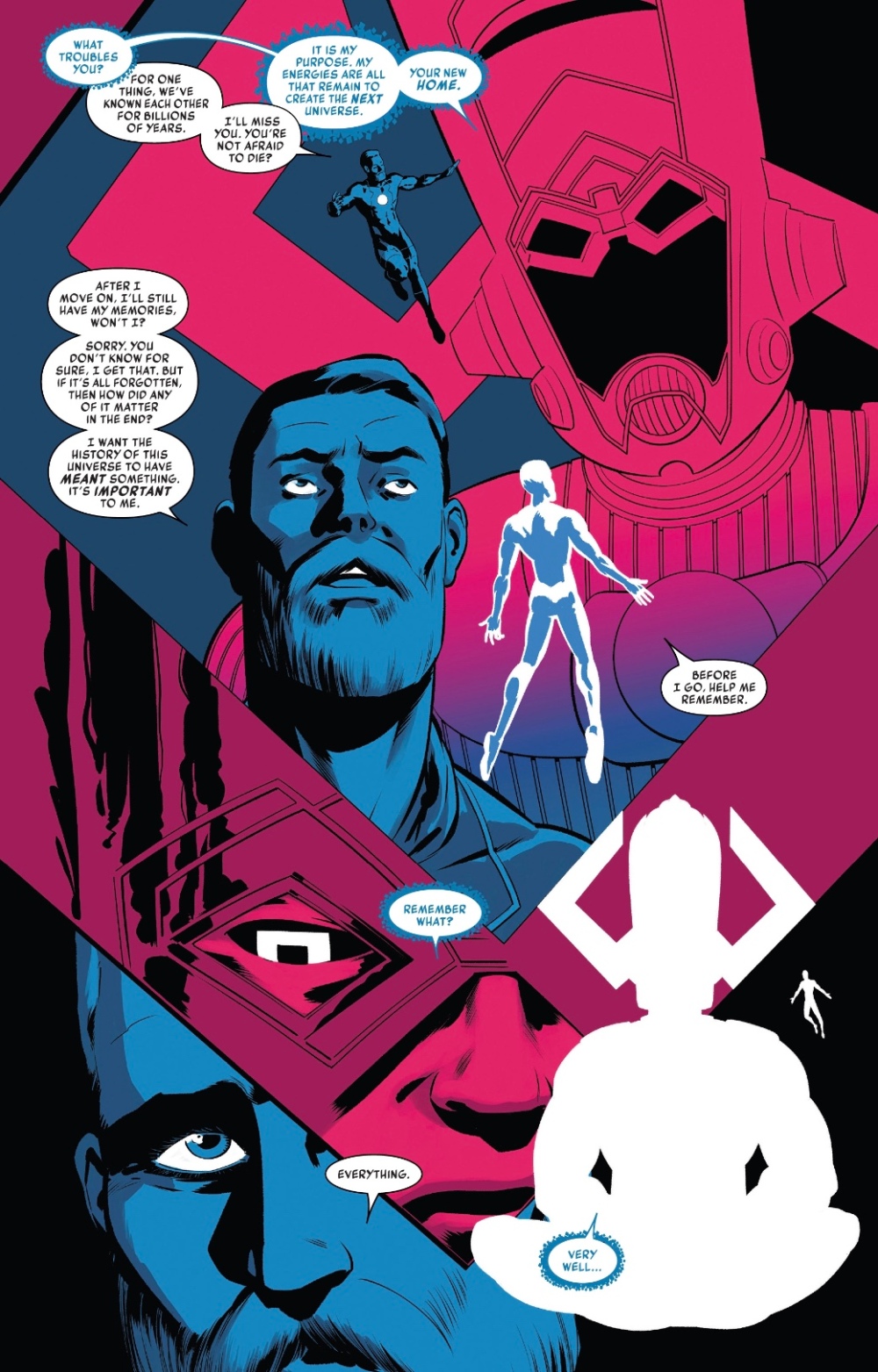 Which is why having him be the one to remind a future Franklin Richards of the labyrinthine history of humanity at first seems an odd choice. Galactus should be unknowable, not chatty – surely one of the Watchers would make more sense? As for Franklin being the Last Man Standing, I’m no fan of ‘knowing’ where someone winds up; the son of the Invisible Woman and Mr Fantastic, though, has been reversion-ed across timelines so often that it really doesn’t matter. The point seems to be that Galactus is the only survivor of the previous universe, and Franklin is set to be the final human/mutant/whatever before his reality blinks out.

Basically, Galactus and Franklin are bookends, cosmic pottery dogs on a mantlepiece stacked with Marvel trade paperbacks. An awful lot of them collect the works of Jack Kirby, whose ideas – beginning with his partnership with Stan Lee in the Fantastic Four and Thor and spreading out into his writer/artist work in the likes of the Eternals and Black Panther – are the bedrock on which the modern Marvel Universe is built. From creation myths to the interaction of pantheons, secret races and humans, this book – comic pages and backmatter alike – makes it clear Kirby’s imagination sparked the Marvel Big Bang, which continues to grow ever outwards, adding new realms and players.

This isn’t so much a comic story as a different kind of Official Handbook of the Marvel Universe; a nine-strong research team is credited with ferreting out the facts and hats off to them for getting all this stuff straight. I’m not sure why a writer of the caliber of Mark Waid has been brought in to turn the research into a sequence because there’s no call for his undoubted gifts in plotting and characterisation. Perhaps as the mini-series goes on a new story will emerge, but so far the script is a useful reference book with no ‘wow’ factor.

What does stun is the art. Javier Rodríguez provides both pencils and colours, Alvaro Lòpez inks and the result is a gorgeous collection of panels, pages and spreads. Storytelling skills aren’t required so much as the ability to homage artists of many a different stripe while maintaining an appealing overall look – and Rodríguez and Lòpez do this in spades. The framing pages are rendered in a slightly different style to the rest of the book, with heavy use of angled panels, negative space and purple to tone with Galactus’ signature look; the result is, again, excellent. I could do without the slightly yellow page borders, an effect that suits comics homaging old ones but isn’t needed here. Joe Caramagna provides the pleasantly neat lettering.

The cover illustration by Steve McNiven, Mark Farmer and Sunny Gho is a striking montage of images, marred only by the overly busy, workaday logo… said masthead does, though, look great on the credits page, where the comic’s designer, Carlos Lao, has had a blank slate to build complementary graphics.

If you enjoy, complicated, convoluted comic book history, this will prove a treat. For anyone looking for an original, affecting new story, it’s best to pass. But if you’re simply a lover of wonderful comic book imagery, don’t miss this.

6 thoughts on “History of the Marvel Universe #1 review”