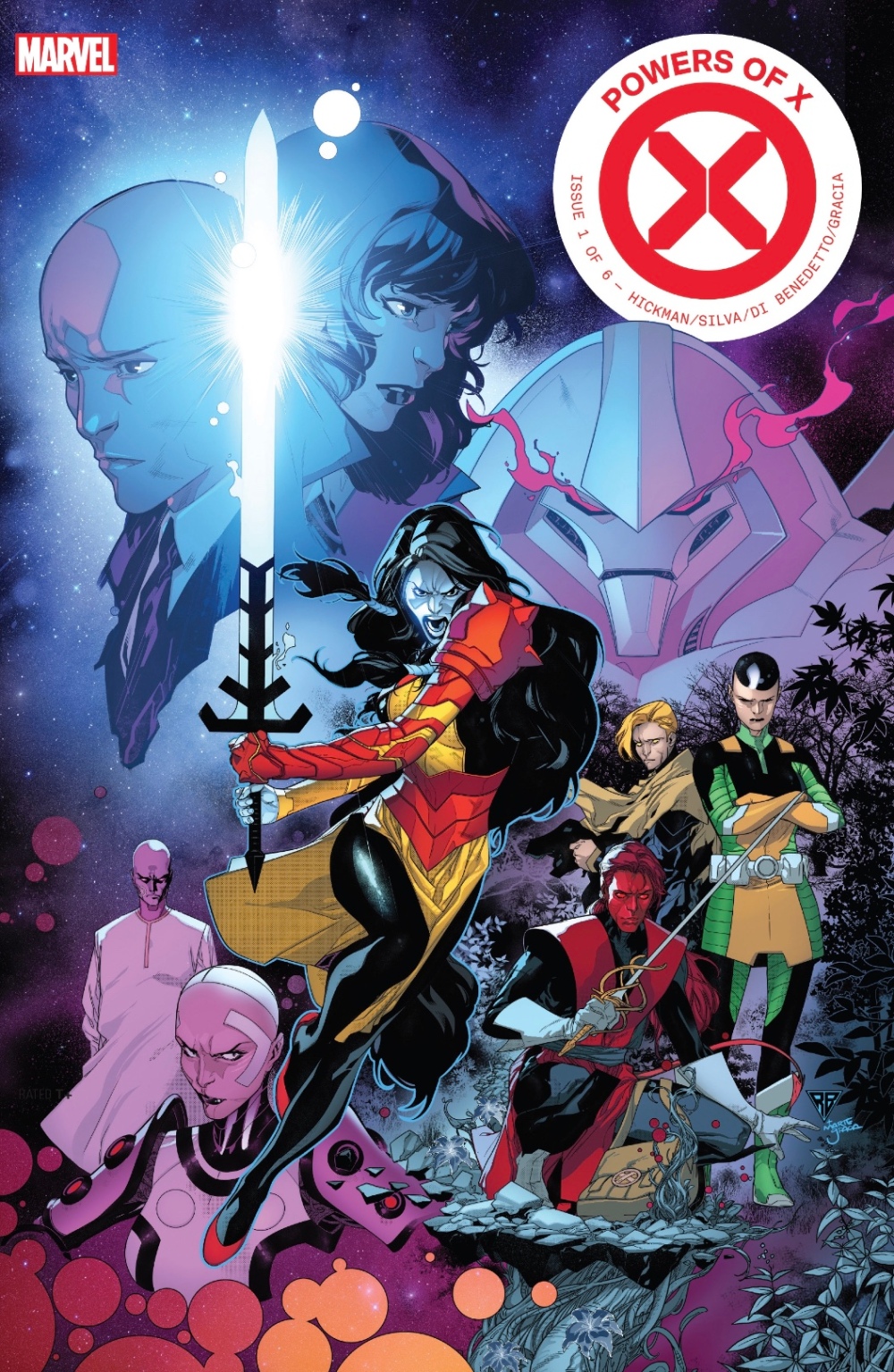 Ten years ago, as his dream of a peaceful coexistence for mutants and humans is forming, Charles Xavier meets a young woman.

Today, on the new mutant refuge of Genosha, Mystique bargains with Charles Xavier and Magneto over a memory stick.

A hundred years from now, mutants and humans are at war.

And after a millennium has passed, things look to have calmed down. 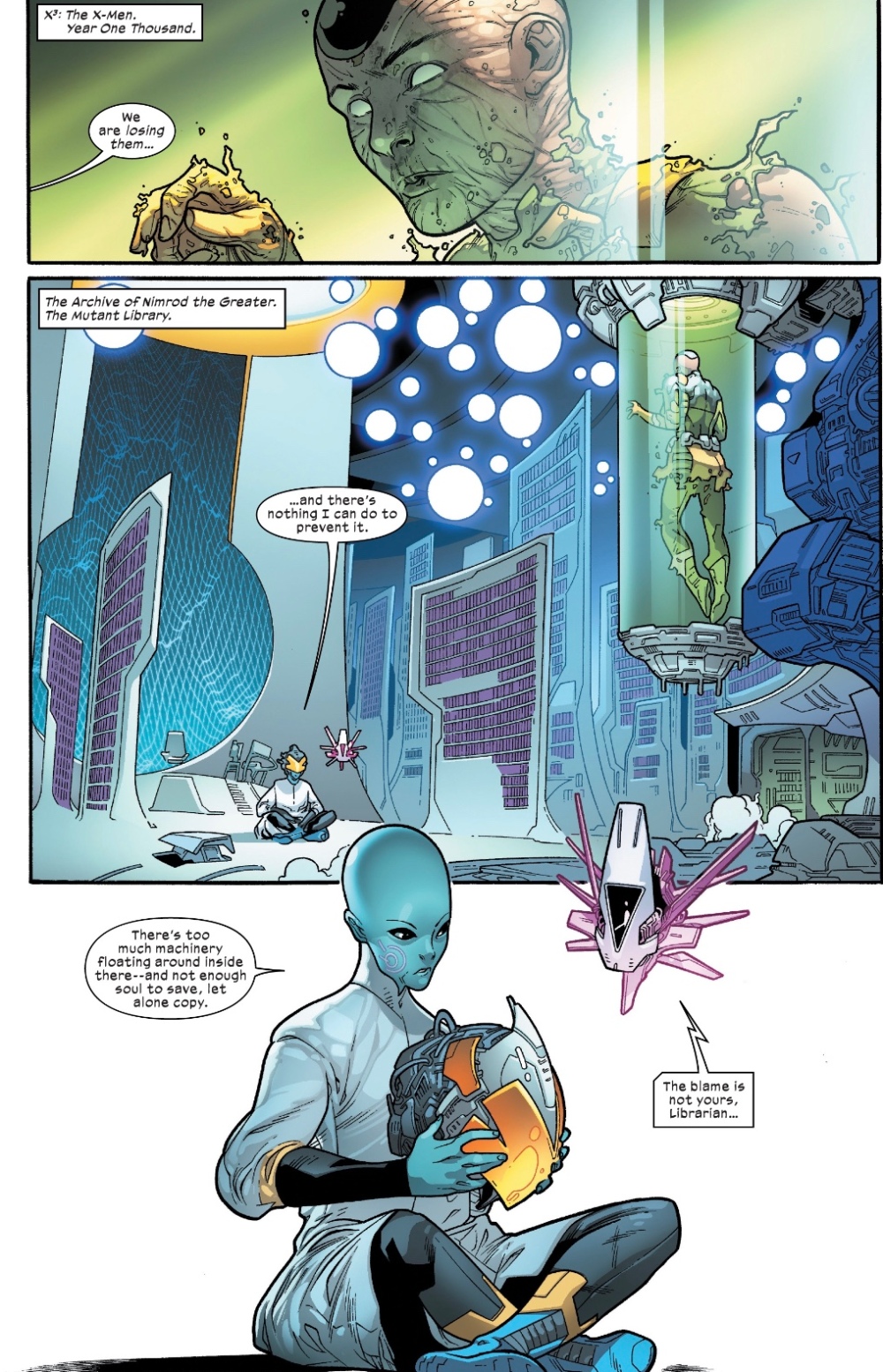 Days of Future Past, a two-part story which appeared in Uncanny X-Men #141-142, is one of the best Marvel tales ever – the script was compelling, the art dynamic. It involved an adult-version of the teenage Kitty Pryde swapping minds with her younger self in a bid to prevent her dystopian present. While a coda left a shadow of doubt over Kate Pryde’s ultimate success, it seemed to be a done-in-two deal… we’d seen a dark future but today’s mutants would crack on, fighting for a better tomorrow.

Since then, though, Marvel Comics have gone back to the DoFP well many times, showing us dark future after dark future, with characters swapping back and forth in time as if there’s no tomorrow. While the X-Men had their victories, over time the clear message seemed to be that Xavier’s dream was doomed – human nature, in homo superior and homo sapien alike – wouldn’t allow it to happen… someone always wanted to dominate.

How depressing to see that, a century on, all that has changed is that the weapons have become bigger, the enemies more soulless, the battlefield extended… and of course, there’s still a Wolverine.

And as this is written by Jonathan Hickman, there are text pages, breaking up the comic story to deliver gobbets of information. They’re designed by Tom Muller and, well, efficient. They do the job but, as I said in my review of companion book House of X, I’d rather background info were in the comic story itself. There is one fine, telling phrase in there, encapsulating the last 30 years of X-Men storylines: ‘‘… the constant evasion-relocation-confrontation cycle’.

This awareness of tropes turned cliches gives me hope that Hickman plans to go somewhere new after the current mini-series, that this is one final round – at least during his tenure as ‘showrunner’ – of mutants vs Nimrod nonsense. Because I don’t find it engaging at all – I want to read about Peter and Kitty and Jean and Kurt and Ororo… not another batch of descendants and dictators. Everything happening 100 and 1000 years from now is mere ‘happening’ – a possible future. It doesn’t matter. What matters is what’s going on right now, that’s what interests me. Hickman is worldbuilding, and it’s impressive, but there are plenty of sci-fi series out there doing the same thing. Just give me a tightly focused X-Men book.

The vignette with Charles and Mystery Woman – she looks like Moira MacTaggart, the pre-story text page tells us it’s Moira MacTaggart, but this is an X-Men book… it’s likely the Shadow King, or Emma Frost, a telepathic clone of Wolverine, or a future Moira who exists only as a data pulse fired into her younger self – intrigued me, and it’s a shame that’s abandoned for all the 22nd and 31st century shenanigans.

I was also keen to see more of Charles and Magento and Mystique, it interests me that this isn’t a Xavier who gives freely; if you want to share his dream, you pay up when he asks. The dialogue is terrific – Mystique, sharp as a tack; Magneto, the madman poet; Charles, a sinister mister.

And the art by penciller RD Silva, inker Adriano Di Benedetto and colourist Marte Gracia is very appealing – easy on the eye, simple to follow, always complementing Hickman’s script. Action scenes grab the eye, quieter moments pull us in. The attention to body language in the bench sequence is especially impressive. Silva and Gracia’s cover is a winner in its film poster-style way.

This is a well-crafted X-Men comic, but most of it is the brand of X-Men that doesn’t grab me. I’ll give it at least another issue, though, to, hopefully, get a better idea of where the franchise is going. And to see who’s inside Moira’s wee Scottish heid – like Charles Xavier, I’m an easy mark.