Red Hood shows up at the remains of the devastated ARGUS building. Having been raised by Batman, Jason Todd’s detective instincts are buzzing. Batman himself has put together a team of tecs to work out who the perpetrator, Leviathan, is and what they want – is he going to recruit his former Robin? 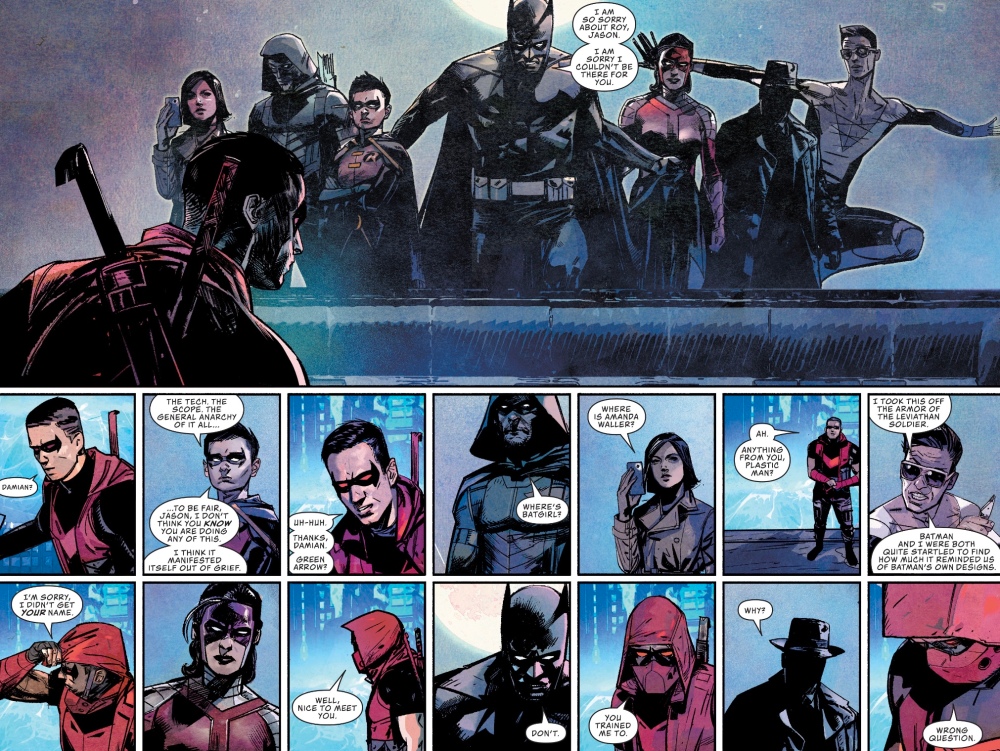 Elsewhere this issue, a flashback shows us that Sam Lane, recovering after a heart attack brought on by an encounter with Leviathan, had an unwanted visitor. Apart from the Question, who has been sitting in the dark for quite a while, for such an occasion as this. 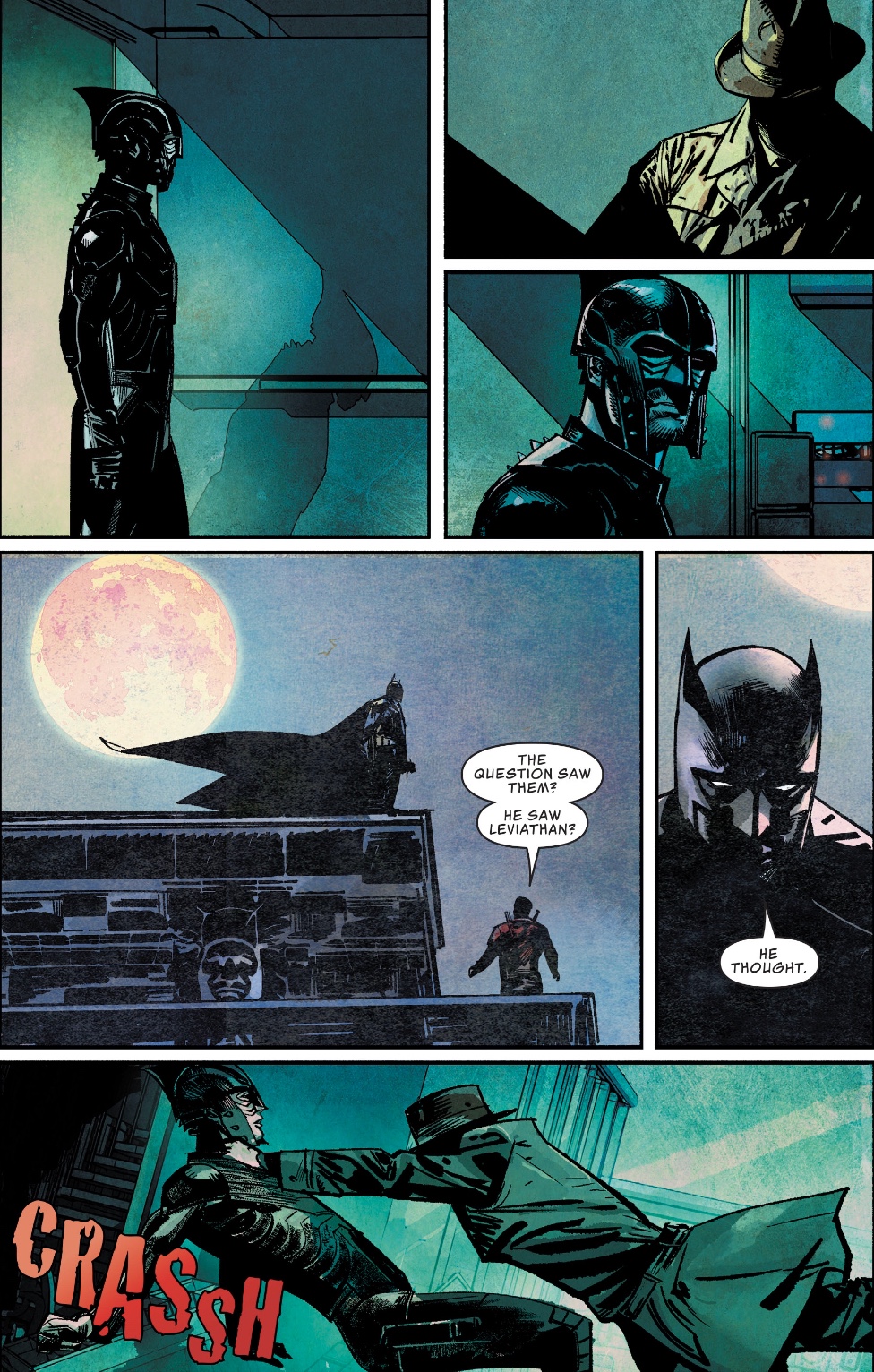 And later, Plastic Man meets the person they’re all looking for. 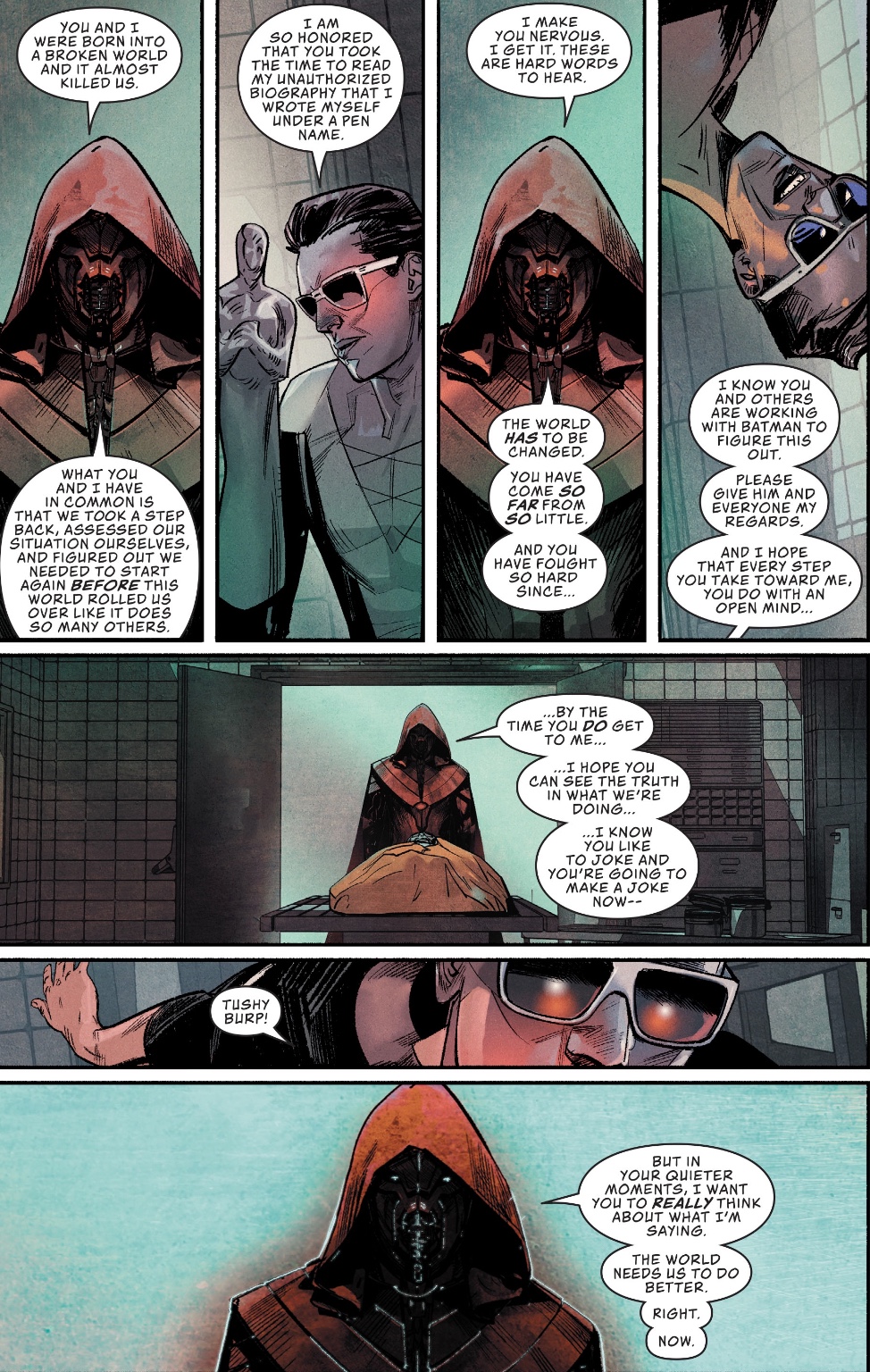 I have to say, I’m supremely unconvinced by Damian’s reasoning as to why Leviathan is Jason. And disappointed in Batman for buying it. I’d be quicker to accept that Leviathan is Red Bee, who hails from the same Earth as Plastic Man, where the Nazis won the Second World War. Insectoid mask, red suit, ‘You and I were born into a broken world and it almost killed us’, hey, that’s Earth X.

Or not. I prefer Anj’s theory over at Supergirl Comic Box Commentary that Leviathan is Earth 4 native Blue Beetle, Ted Kord, (insect themed again) trying to fix a world he was dragged into, helped by the likes of Nightshade (teleporter) and Captain Atom (enforcer). Which means that Sam Lane’s visitor, a former ARGUS agent named Casey Klebba, could be a stand-in for Peacemaker, whose costume silhouette isn’t a million miles from this look.

If you’ve not been following Anj’s Leviathan theory posts, here’s a link to the first.

So anyway, Batman stages a massive superhero intervention, bringing all his detectives – and Manhunter, for some reason – to intimidate Jason. Like that would work. He’d be better off bringing a telepath to read his former ward’s mind, or a spellcaster to make him reveal all, or a time traveller to check his movements, or Deadman to inhabit him and look into his memory, or…

… I really should suspend my disbelief when reading a detective book set in a world of wonders. Thing is, it’s easier when Batman is surrounded only by Batman types – bring in characters from other parts of the DC Universe and it’s hard not to wonder why he doesn’t access other heroes who might help more directly.

I did find the conversation between Leviathan and Plastic Man – again, so not one of the world’s greatest detectives, but remember, Ralph Dibny doesn’t know Red Bee! It really does sound like Leviathan is a hero gone rogue, but Red Hood seems a bit random; unless he’s changed since I stopped buying his mag, he’s not the big picture type, and Leviathan’s plans seem to be colossal.

I must say, I’m surprised Sam Lane has a gun in his bed. Then again, given that a shady figure like the Question can haunt his room, it seems hospital security isn’t exactly great. Maybe Lois left it there (along with a bottle of Jack Daniels.)

Little quibbles aside, I enjoyed this issue lots, from the Action Comics style ‘mood board’ recap spread at the start to the final page cliffhanger. Writer Brian Bendis is obviously having huge fun with his cast of characters, chuckling as he leads us down blind alleys. The conversation between Plastic Man and Leviathan is outstanding, I didn’t want it to end.

And the art continues to impress, Alex Maleev is settling into the DCU very nicely, adding an extra layer of moodiness to Bendis’ superhero noir. Especially impressive is how much emotion he can bring to Jason, a character who never removes his domino mask. Maleev colours as well as illustrates, ensuring every visual nuance he wants to conjure up makes it to the page – his blue cityscapes are particularly impressive, and his moon just gorgeous.

Josh Reed’s letters are great looking too, and if he, rather than someone in the DC Production Department, did the mood board, extra points.

So, who is Leviathan?