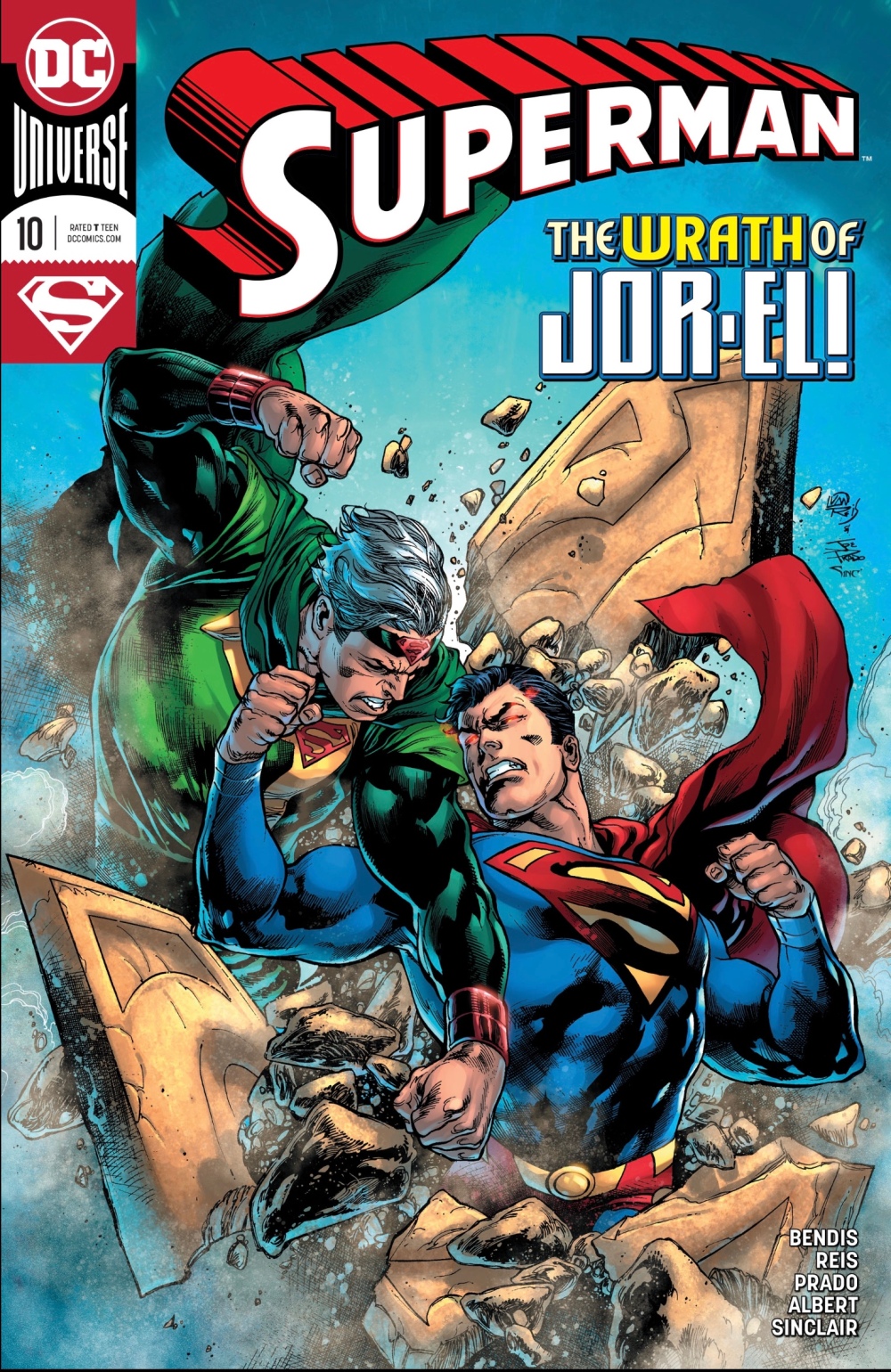 Jon Kent is telling his parents just what happened to him after he was sucked through a time/space wormhole while having the weirdest summer vacation ever with space-Grandpa Jor-El. He wound up on Earth 3, where Evil rules, and having escaped Ultraman, a vile version of his dad, Jon bumped into Bad Mom, Superwoman. She’s not the nurturing type.

Reluctant to fight back against someone who looks and feels so much like his Lois Lane, Jon takes flight, and finally, after years of being tormented on this crooked counter Earth, he meets a friendly face. 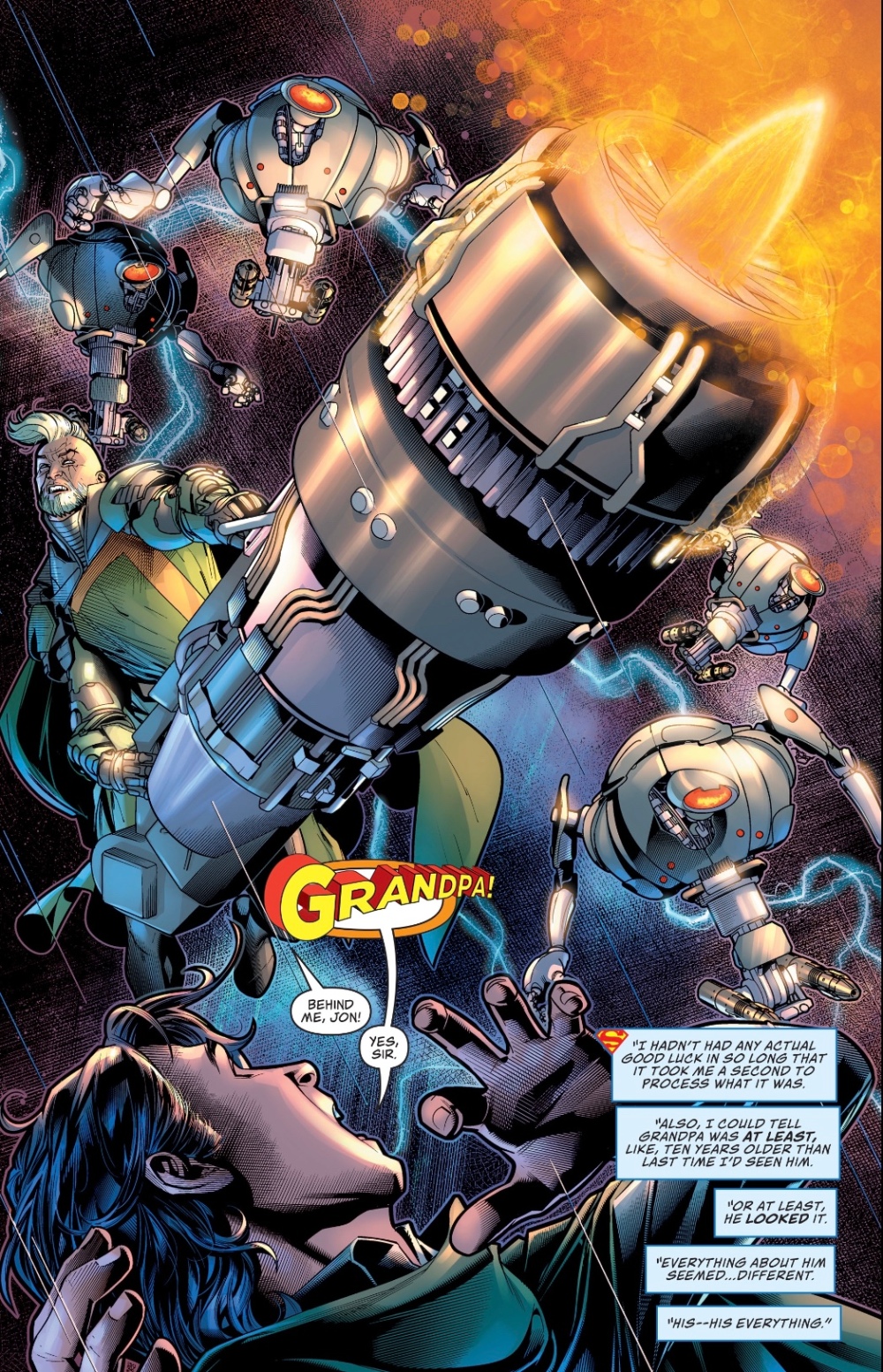 After safely making it to his Kryptonian ship, Jor-El fills his grandson in on what he’s been doing. 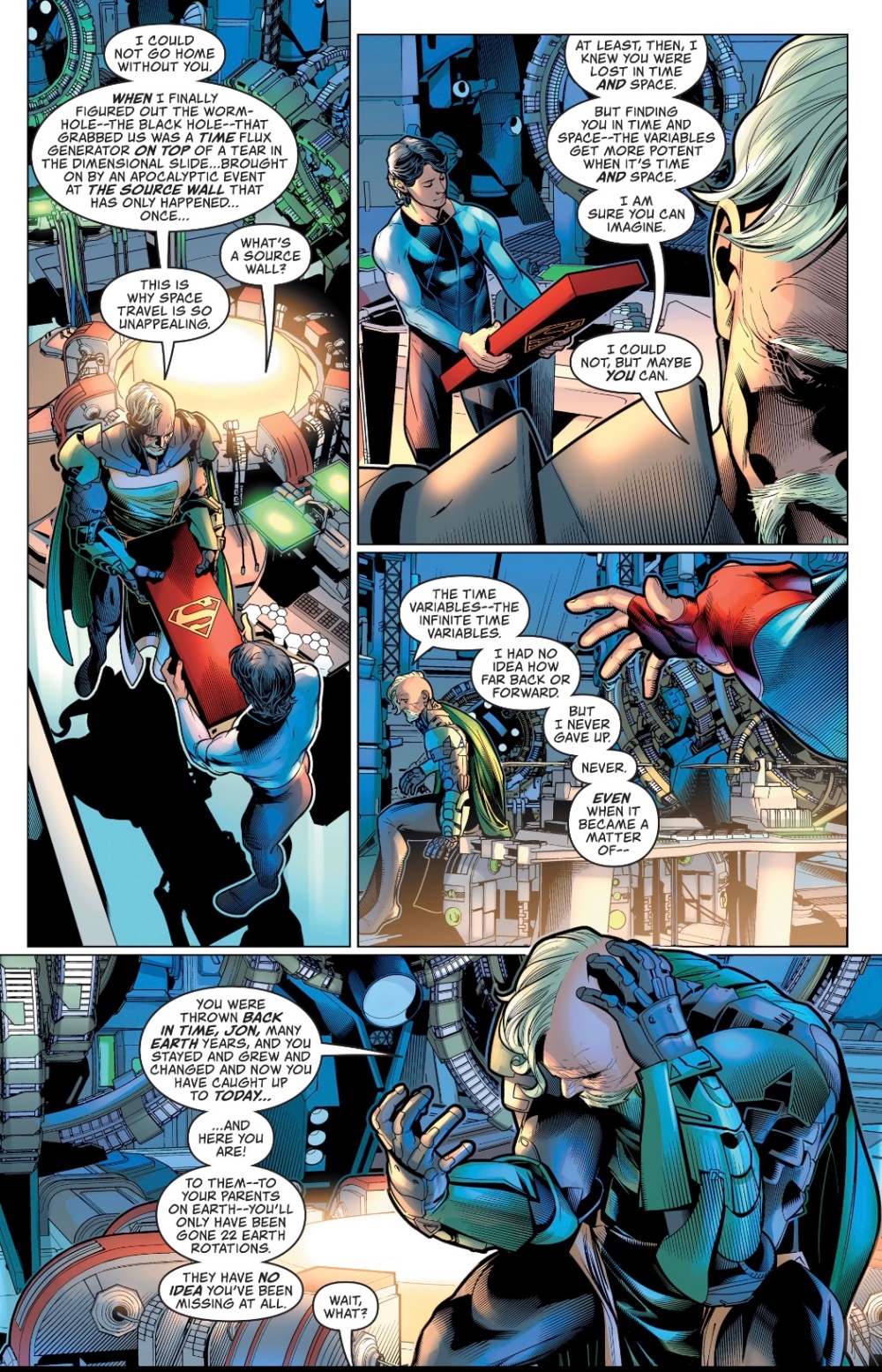 … Superboy escaped, obviously, living to tell the tale to his parents. They have to put aside their guilt at what happened to their little boy during the – to them – short time he’s been away because they know there’s an immediate threat to be tackled. 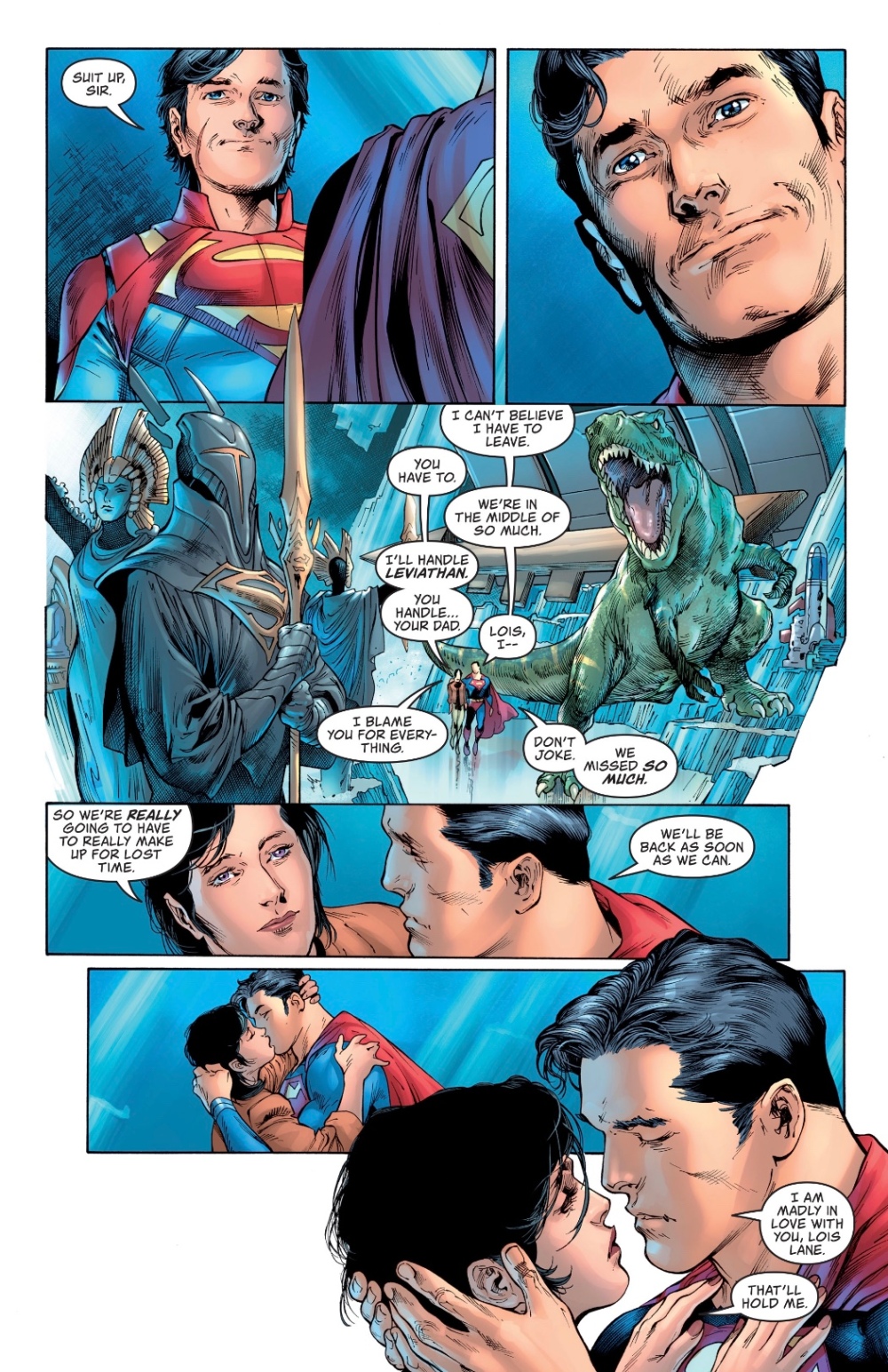 Anger, relief, regret, fear… Jor-El experiences it all when he’s reunited with his grandson. Relative time being screwy, he’s aged even more than Jon during their separation. He does seem slightly more sane, nicer, than last time we met the former Mr Oz, setting him up for a day-saving death as this House of El storyline concludes.

Well, that’s my guess, anyway. It’s good to see where Jon got his new Superboy costume. It seems Jor-El has added a few bells and whistles, such as a transporter beam that whisks Jon to his side, which makes sense – he’s lost the kid once, why not add the Kryptonian equivalent of a pet microchip?

So the Justice League Source Wall business is to blame for Jon’s extended trip to Earth 3… that’s a nice bit of continuity. Maybe Lois shouldn’t lampshade the fact they’re not calling in the Justice League and GL Corps, mind, when, really, Superman should be contacting everyone from the JLA to the Zoo Crew for help.

Good on writer Brian Michael Bendis for having Jon mention best pal Damian a few times; he’s the most important person in our Superboy’s life after his parents. Hopefully this means the friendship will survive even if Jon stays a late teen.

My theory that aged-up Superboy is really Ultraman and Superwoman’s kid looks to be thoroughly knackered, but never mind. Bendis does a great job of showing us that Jon has the character to survive the crucible of his Earth 3 ordeal without going dark. It’s so sweet that when he and Superman are going into hero mode, Jon calls ‘Pa’, ‘sir’.

Interesting to see Lois mention Leviathan – after Bendis’s Man of Steel mini-series the action in Action Comics and Superman seemed to be months apart, but now everything is happening around the same time. The timeline is a bit confusing and should have been ironed out editorially before the issues hit the stands.

There’s terrific art, once again, from the teams of penciller Ivan Reis and inkers Oclair Albert and Joe Prado, and Brandon Peterson doing full illustrations, all splendidly coloured by Alex Sinclair. The massive space battles dazzle, as does the encounter with Superwoman, but it’s the smaller, emotional beats that I like best; Reis and co really capture the mixed emotions of Lois and Clark, while Peterson almost convinces me Jor-El is redeemed enough to join the regular cast. But, sorry, he’s still a loose cannon as big as that gun he whips out.

Perhaps my favourite thing this issue, though, bringing a goofy grin to my face, is that ‘Grandpa’ in the telescopic Superman Family font. It’s a piece of delightful silliness from letterer Josh Reed that lightens an intense moment.

And how good is it that the presentation of the new suit shows Jor-El understands the importance of branding?

Line of the month? ‘This is why space travel is so unappealing.’ Indeed.

Package all this goodness behind a sharp, dramatic – and typically misleading – cover by Reis, Prado and Sinclair and you get an all-round excellent issue. The overall Unity Saga shows no sign of wrapping soon, but justified quibbles aside, I’m enjoying this series an awful lot.