Jimmy Olsen’s on a date. He’s in Seattle with new squeeze Ella, but he starts to wonder what kind of squeeze she’s out to put on him when she introduces him to her religion.

The Daily Planet’s red-headed photographer manages to get some snaps and get the heck out, just before things go ‘boom’.

We next see him waking on Perry White’s office couch in Metropolis, only hours later, given the ash on his freckled face – begging the question of whether he still has access to the Newsboy Legion’s Whiz Wagon. Being a vintage newsman, Perry has questions. 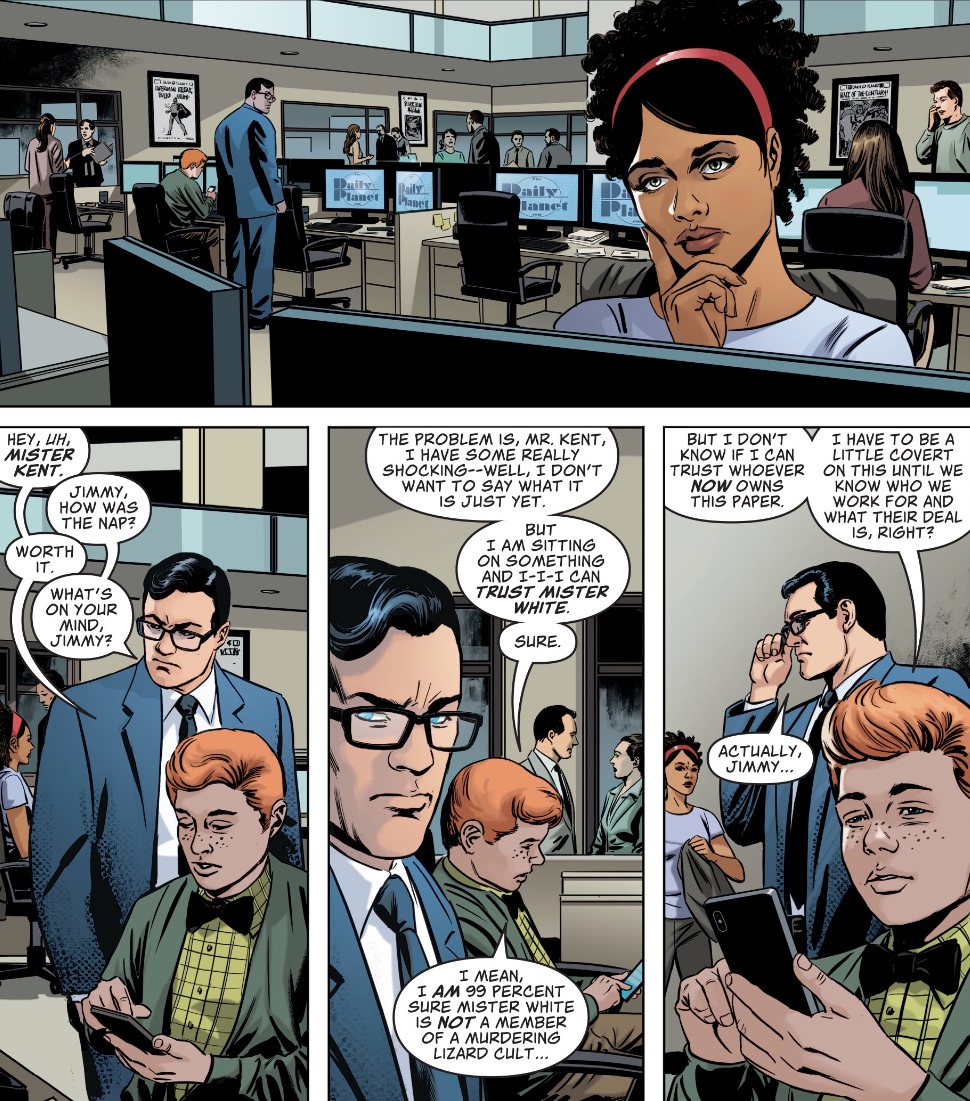 Outside Chicago, Lois Lane is having a long-overdue conversation with her father.

And back in the big city, Superman races to rescue a falling woman…

Jimmy, of late, has also been falling – falling asleep in the Planet newsroom. He’s knackered again here, but at least we can now infer that Mr Action has been running around after the rather fast Ella (Young Mr Olsen has always been rubbish at picking girlfriends, from the toxic Lucy Lane to lady gorillas and space monsters). It’s likely fair to say she is no more, killed in the explosion at the cult HQ. Has Kobra gone full-on death cult, or is this the Leviathan organisation taking out rivals, as teased in solicitations? Whatever the case, it’s great to see Jimmy, with really rather swish hair, getting some panel time to show not only his facility as a photographer, but also his knack for getting into, and out of, a sticky situation.

If Lois discussed her decision to reveal Clark’s secret identity with him before telling all to her father, great. Brian Bendis writes an excellent scene, the emotions feel real – I just hope it’s not something that’s going to cause trouble, given Sam Lane’s loose cannon habits. Then again, just imagine a meeting between Sam and his Kryptonian counterpart… I really appreciate Lois expressing her love for Clark so forcefully, I hope this is her back in Action full time after her sojourn away.

Given the falling woman of Metropolis turns out to be Amanda Waller – at first, I assumed she was doing a Golden Age Lois Lane, trying to get Superman’s attention with the power of stupidity – I’d have let her drop. The Wall of today is a worse person than some of the villains she controls in the Suicide Squad. But that’s a matter for another comic; this one, I enjoyed hugely. Bendis’ plotting intrigues – it’s quite nice to have a month off from the admittedly fun gangster stuff – and his character work is fabulous… this is a Perry White I can believe in, for example, deeply frustrated by, and annoyed at, a kid he cares for. I’m intrigued by the beginning of the Leviathan story, though as I expect it to loop back to the Invisible Mafia business, it’s probably fair to say it began months ago.

There’s not a lot of Clark or Superman here, but I’m good with that – I’ve long wanted a Daily Planet book, and here it is.

The artwork by illustrator Steve Epting and colourist Brad Anderson is beyond stunning – I liked Epting way back when, when he was drawing Dan Jurgens’ underrated Aquaman run, and he’s gotten better and better in the couple of decades since then. His compositions, his character acting, the action sequences, his finishing…. it’s comic art for the ages. That five-page Lois and Sam sequence should be up on the wall of the Joe Kubert School as a masterclass in how to make a conversation compelling. The flight page is terrific, as Superman approaches what begins as a tiny ant of a figure. The first page, with Jimmy’s camera bag replacing the workstations we’ve begun with since Bendis arrived, has a very nice, telling detail in that apple. Jimmy himself looks cool, his Sixties outfit now stylish again. And every page is thoughtfully coloured by Anderson with real craft.

The lettering, too, is first rate, as Josh Reed adds drama to the dialogue, and throws in some terrific title lettering. 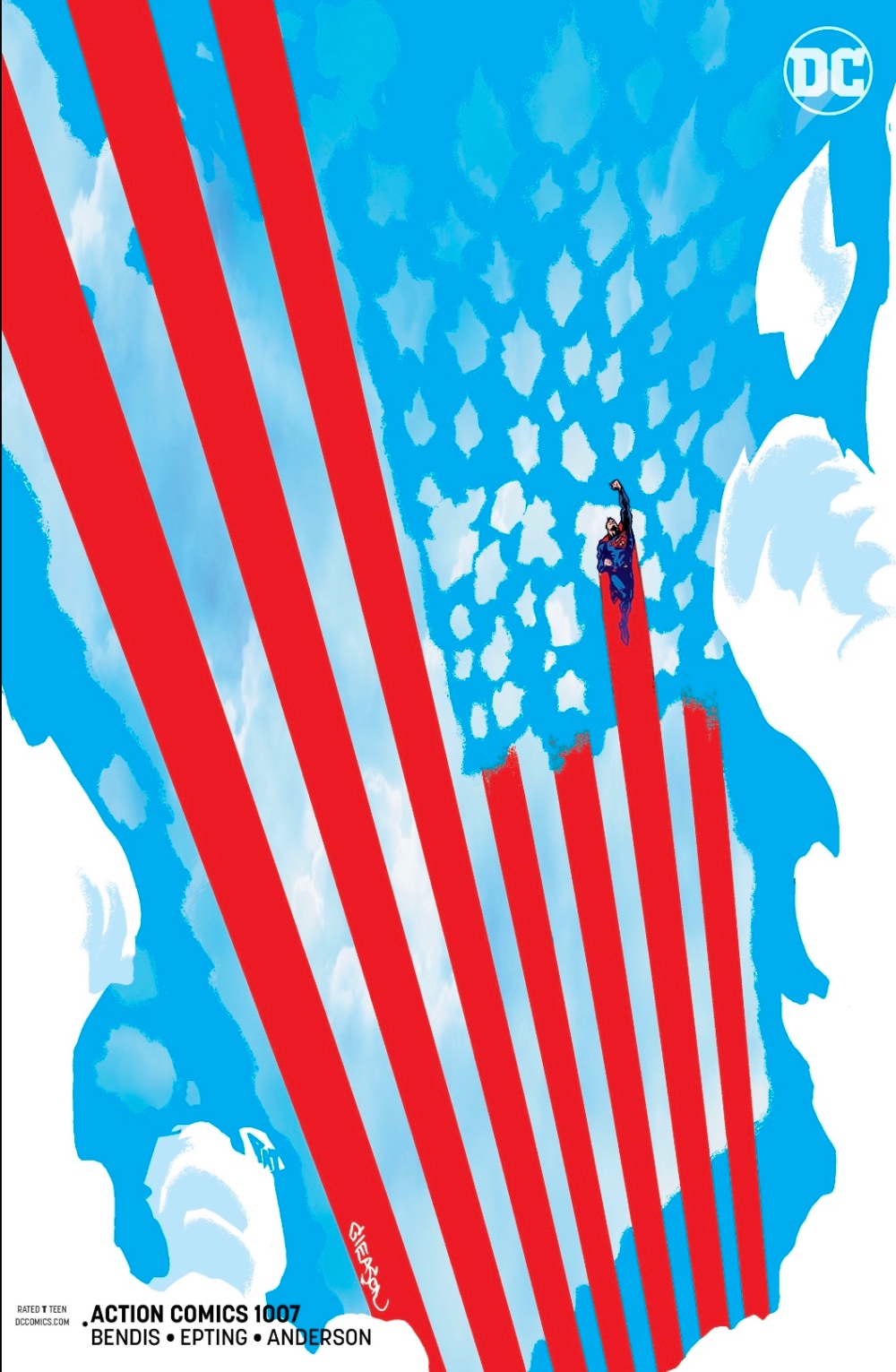 As for the covers, that movie poster-style Lois and Clark image by Epting is just stunning. Patrick Gleason’s Stars and Stripes variant is also a winner, clever and gorgeous.

All this, and a brilliant sight gag for anyone who’s been following the Batman series.