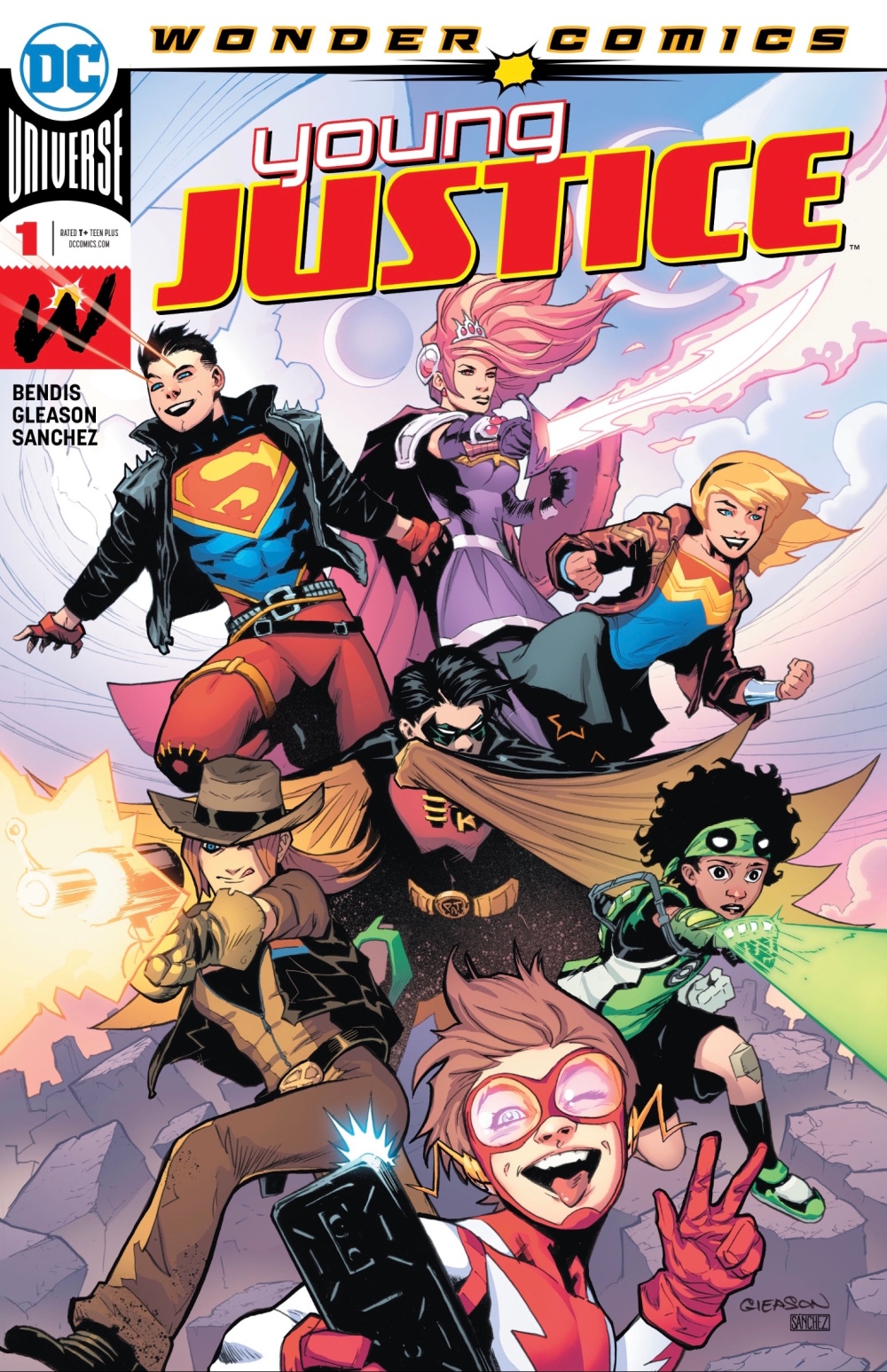 It’s just another day in Metropolis. A traffic cop wants a young woman to show what’s in the back of her pick-up…

… and the sky opens, spewing terrifying figures into the city.

Luckily, cowgirl Jinny has arrived in the big city on a day unlike any other… a day when Superman isn’t around, but a whole heap of young heroes are close enough to defend the residents of the City of Tomorrow.

Tim Drake, having reclaimed his Robin name, is just by Jinny as she runs into trouble with Metropolis PD; Wonder Girl Cassie Sandsmark is on her way to her summer job before starting college; Bart Allen, Impulse, is passing by on his way to an in-joke… 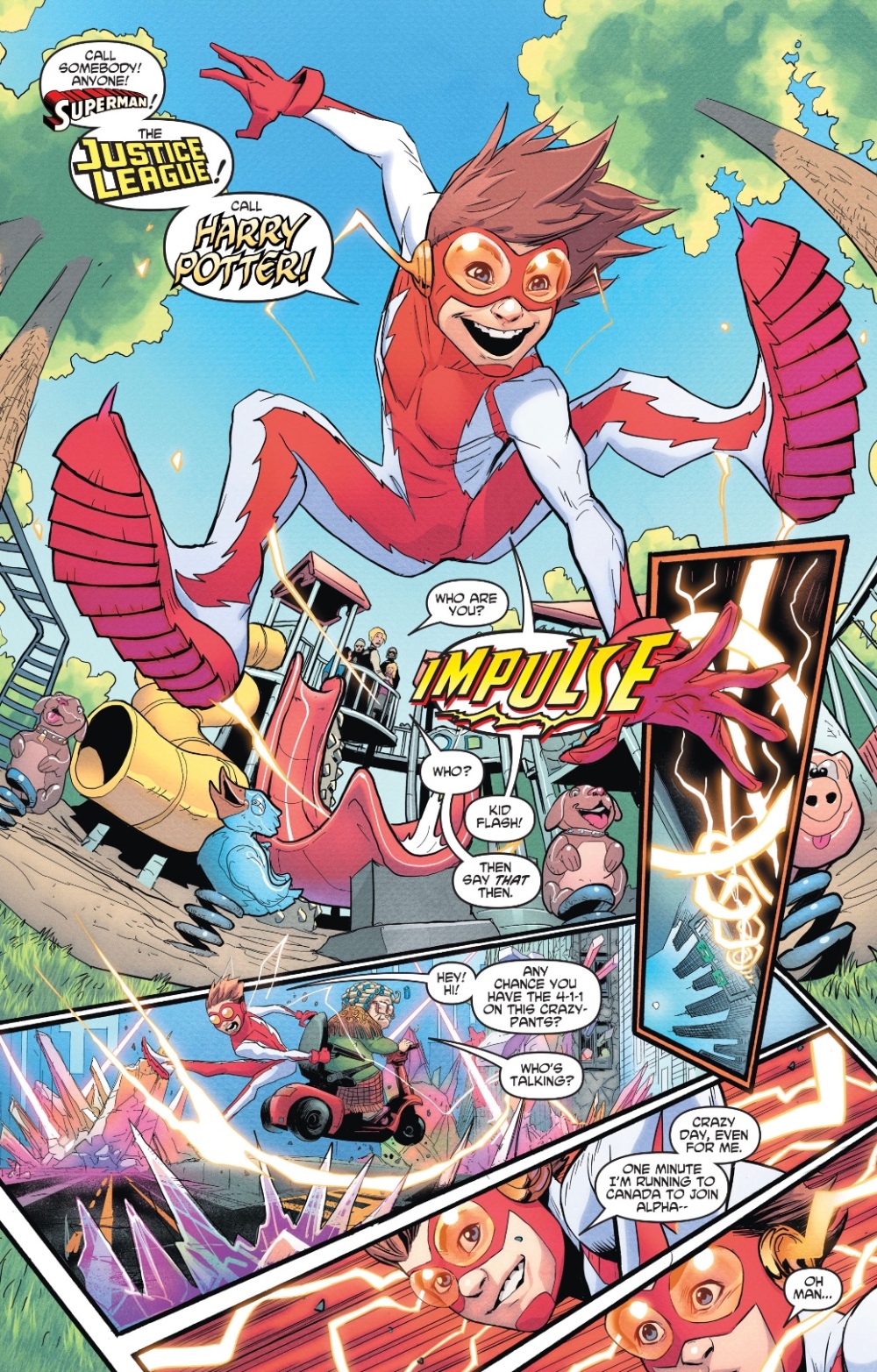 So what’s got the folk of Gemworld so annoyed? Writer Brian Michael Bendis and artist Patrick Gleason reveal all on the opening page. 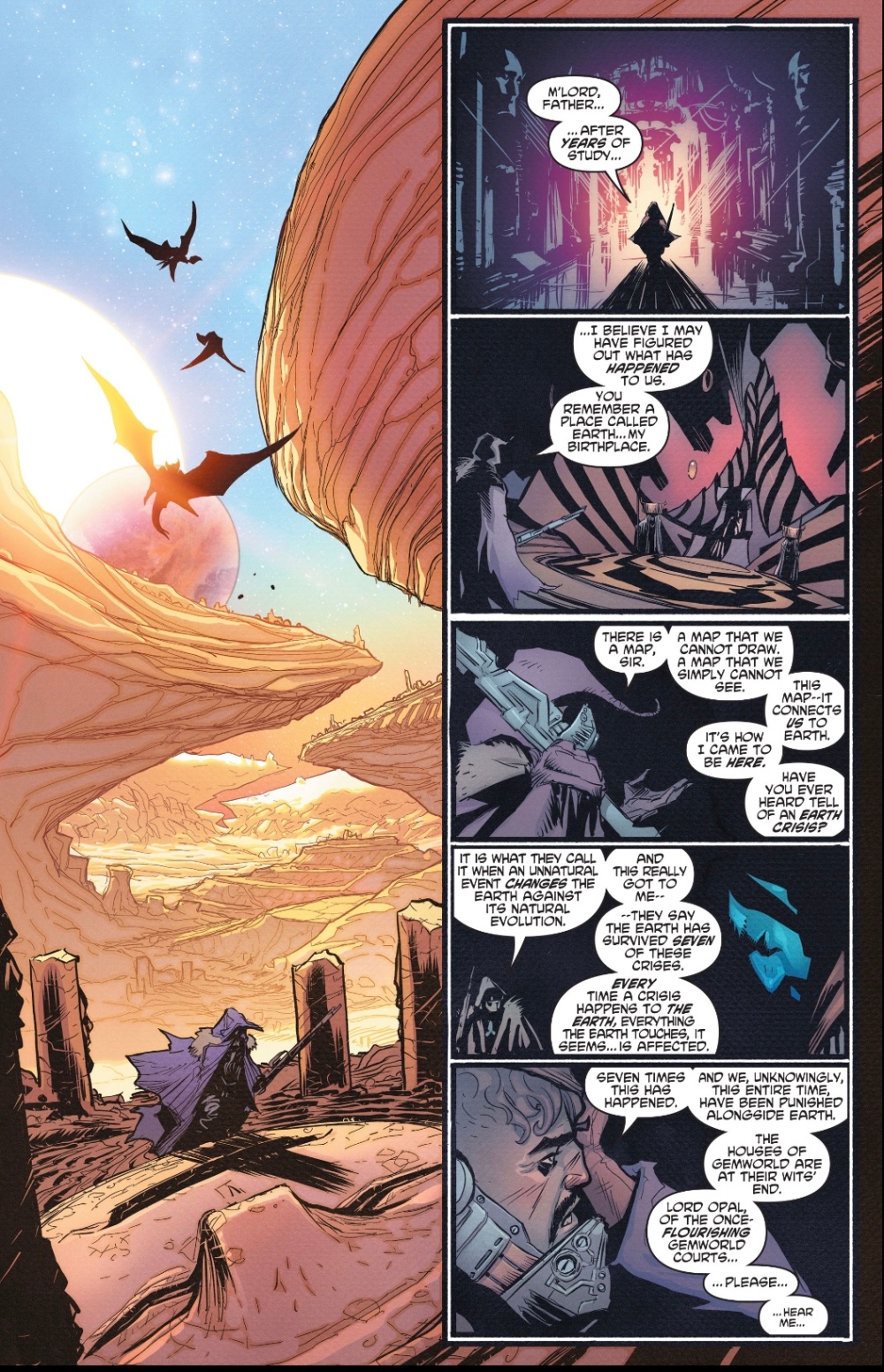 I see their point – Crises beginning in the dimension occupied by the Justice League and co have twisted Gemworld again and again, apparently to the extent that its own princess, Amethyst, has forgotten she’s been involved a time or two.

As I began reading this debut issue, I was looking forward to seeing certain questions answered: how does this classic Tim Drake Robin fit in with the super-intense guy seen recently in Detective Comics? Why is Bart, last seen as Kid Flash, back to being Impulse again? Who do we thank for Cassie Sandsmark having had a boob reduction job since the New 52?

Pretty soon, though, my reaction was: who the heck cares? When I was growing up characters would disappear for years and come back slightly tweaked; no one worried, the assumption was that stuff had happened, and here they were. And if an explanation is needed, there’s one built into this issue – Crisis shenanigans.

I’m thrilled to see members of the original Young Justice, who lost their charm when Geoff Johns turned them into the Teen Titans, back together. Bendis does an especially great job in giving Bart his personality back – Johns made him a pretty generic Kid Flash. What’s more, he set up a mystery around Wonder Girl, adds a pair of immediately likeable legacy heroes in Jinny Hex and Teen Lantern (I’ve often wondered why such an obviously neat name has never been used) and, on the final page, brings back Conner Kent in classic mode.

The gathering of the team bit never gets old, with Bart even commenting on it (is this instance so tidy that they’re being manipulated?). Speaking of Bart, he’s on the verge of breaking the Fourth Wall (it wouldn’t be his first time), which makes sense for a member of the Flash family – his grandad Barry has been able to assume he’s a comic book character since 1961’s Flash of Two Worlds.

A quibble I have with Bendis’s sparky, fast-paced script is that he has the Gemworld folk making wisecracks; when their dialogue does get grandiose, it’s for a gag. Representatives of Gemworld’s houses should not be sounding like they’ve stepped off the set of a sitcom, they should come across as the Fantasy folk they are, contrasting with this book’s stars.

Gleason’s art, coloured by Alejandro Sanchez, looks fantastic throughout, from a chilling Dark Opal in the opening sequence to the final page shot of a slightly bedraggled Superboy via the double-page ‘Young Justice is back’ spread. The characters are full of personality, the action moves like Billy-O – angled panels look like they’re dropping onto the page with great speed even as we read – and the hero shot splash pages are tremendous. Gleason’s decision to only show Impulse in between moments of running, or to just illustrate his speed trail, is interesting, but a gimmick that will likely prove restrictive; let’s see how long that lasts.

Sanchez colours Amethyst in line with recent appearances, giving her purple hair, lessoning the contrast, and therefore interest, in her visual; can we go back to the original blonde, please?

There’s no individually named letterer to thank for the appealing fontwork and nice use of logos in dialogue, with the issue credited simply to ‘DC Lettering’. Well, nice job ‘DC Lettering’.

Random points: it’s fun to see waitress Laura and her pal, who appeared in Bendis’ first Superman story in Action Comics #1000, again fail to enjoy a nice cup of coffee – is Kaplan’s Cafe DC’s answer to Marvel’s forever wrecked Josie’s Bar? Tim questioning Jinny’s use of lethal bullets is as it should be. And I love that Bart is making sure pets get saved along with people.

Gleason and Sanchez’s joyous cover was originally intended for the third issue, to be preceded by shots of the boys, then the girls. I’m glad the decision to swap things around was made – even if the whole team isn’t together by the end of the first issue, it’s nice to see who we’re getting.

The original Young Justice had a flavour all its own, a joie de vivre you couldn’t find anywhere else, and this 30pp debut issue captures it in spades. This is the first of DC’s new Wonder Comics imprint and it’s a fine start.