Damian Wayne and Jon Kent have spent the last few issues tackling the super-brats calling themselves The Gang. Artificial red kryptonite has split Superboy into blue and red versions of himself, Robin is getting increasingly ratty, the boys are outnumbered…

While the good guys head for space to regroup, Rex Luthor plans his next move.

Damian, meanwhile, wonders if his best pal, the blue version of whom is upchucking like crazy, will ever get himself together. 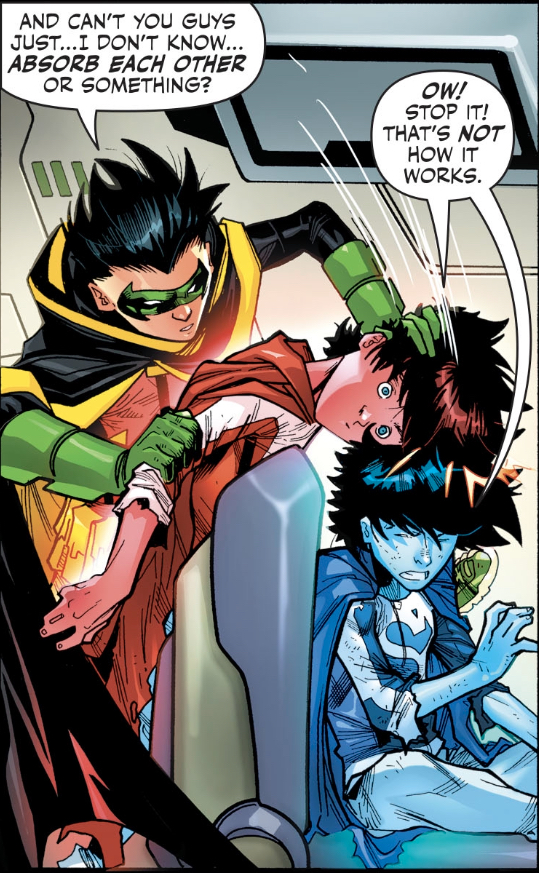 The thing is, Space Cabbie has lost control of his taxi, and it’s pitching through the heavens.

Then, the spaceship finds itself on an Earth-like world, and while Space Cabbie and Joker Jr try to fix the taxi, Robin and the fractured Superboy head for an old, dark house to find help…

From Dan Mora’s cover homaging House of Mystery #174 and its treasury edition offshoot to a final page cliffhanger that’s perfection in its peculiarity, this is pure comic book fun. It has all the drama, humour and surprises any superhero fan could want, and if it doesn’t continue beyond the announced 12 issues I’ll be hugely disappointed. Peter J Tomasi’s well-worked script pops with every page, while the art by penciller Carlo Barberi, inker Matt Santorelli and colourist Protobunker is a visual delight. The Gang remain delightfully goofy; Space Cabbie, while not the Silver Age version I know, has a great design; the unseen monsters are yet threatening; and the Super Sons themselves are tiny legends. Rob Leigh also gets a sense of fun into his lettering – there isn’t a weak page in the book.

The ease with which Tomasi and co segue from sci-fi superheroics to spooky spectacle shows that this tween team- up title could go anywhere. Let’s hope it gets the chance.

9 thoughts on “Adventures of the Super Sons #4”