Robinson Goode, who’s bad, has a meeting in the Metropolis Underworld. She’s spying on the Daily Planet staff for an unknown criminal mastermind, and has kindly requested insurance for the almost inevitable run-in with Superman. 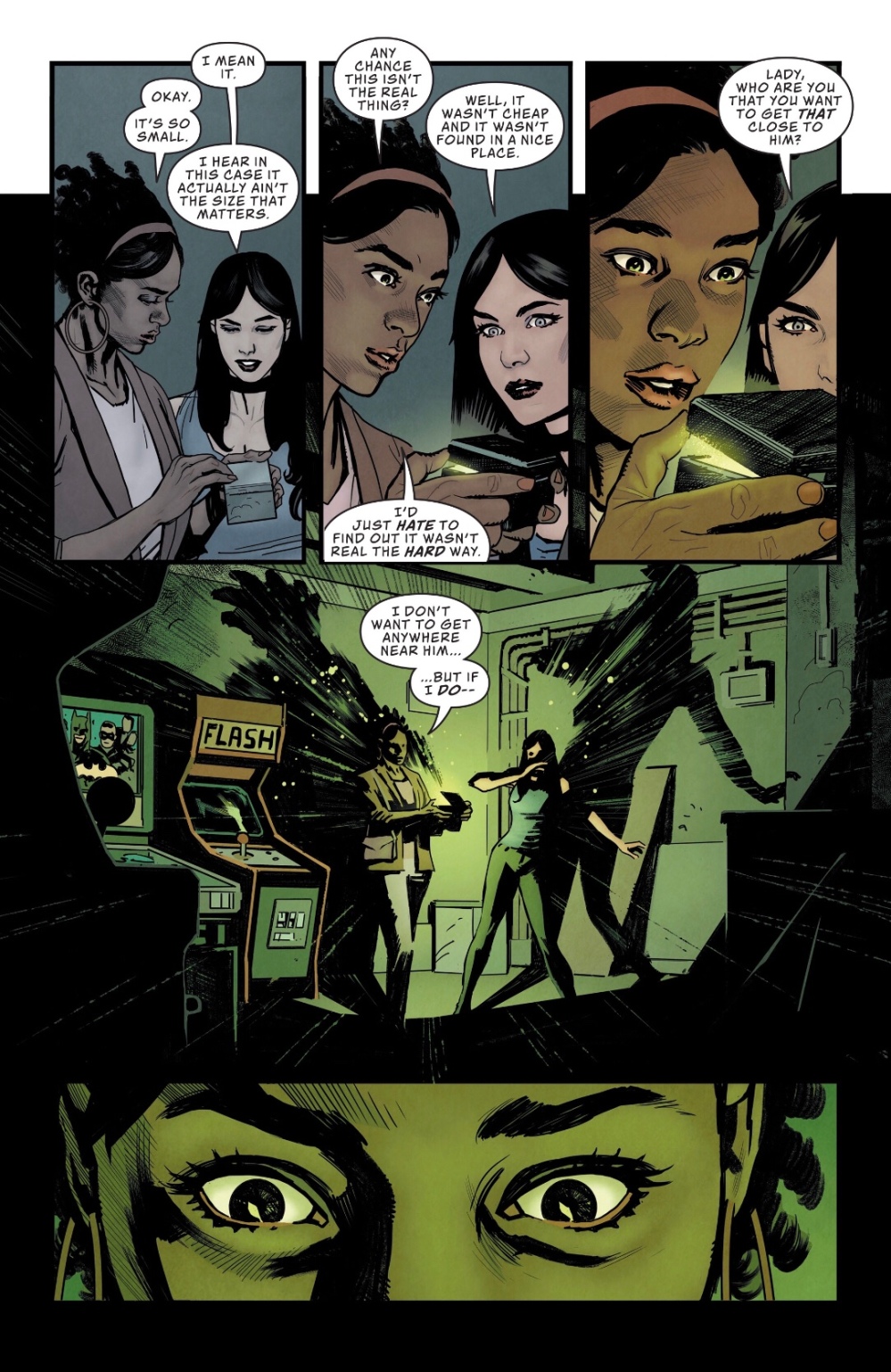 Later, back at the office, Clark has the mother of all migraines. 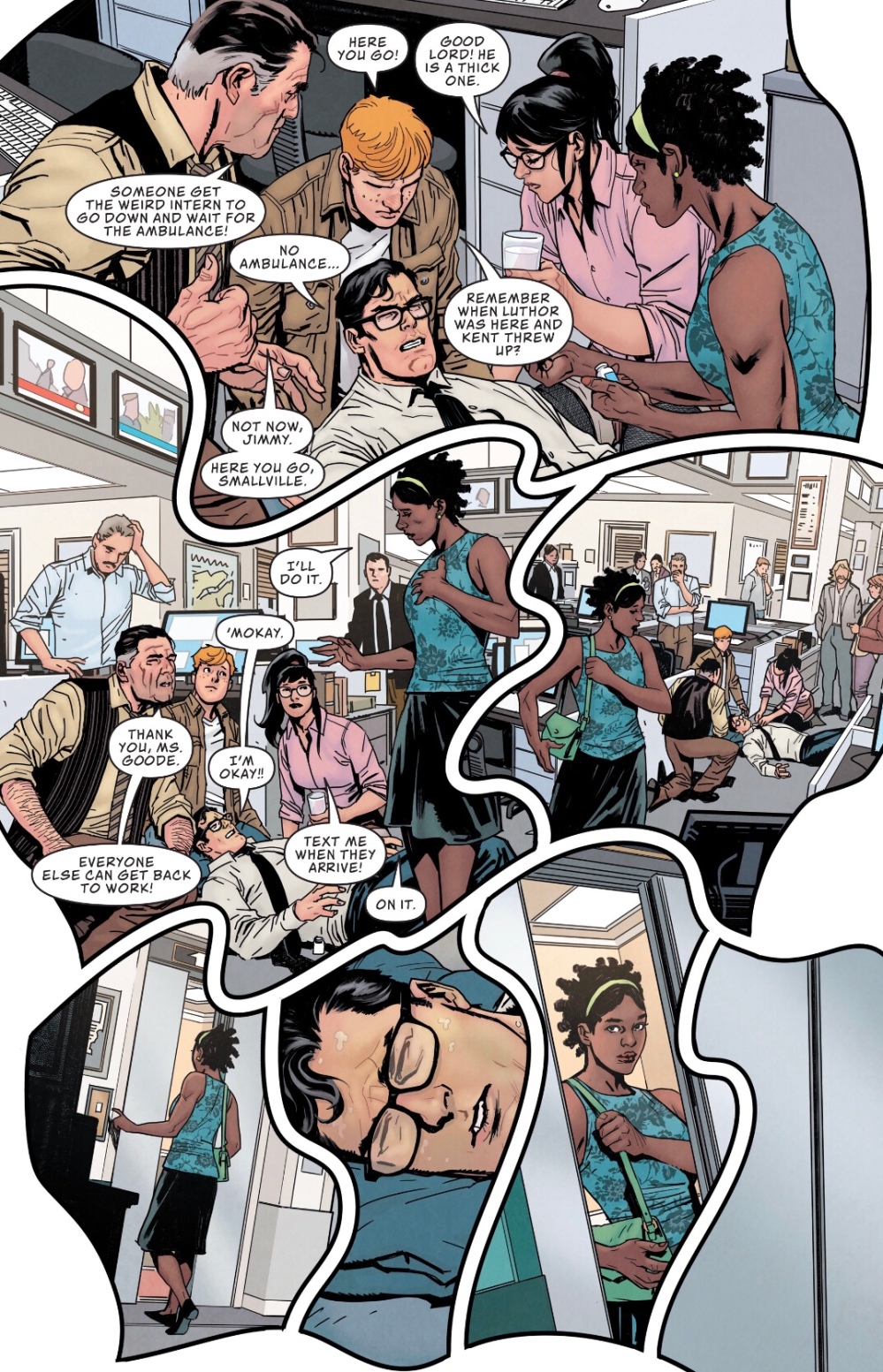 Or should that be Mother World? He soon works out where the familiar pain comes from. Luckily, Goode leaves the Planet’s news pit to, supposedly, watch for an ambulance that’s been called for Clark, giving him a chance to recover, and get away.

A helping hand from a friend gets the green Kryptonite out of Goode’s grasp.

As he’s done previously, Batman takes a piece of Kryptonite back to his place, not just to protect Clark but to protect the world from Clark the next time he’s possessed… it’s a bit of a thing.

Goode’s not happy about what’s happened, and goes back to moan at her green K supplier, Candy. Within minutes, one of them is dead…

This is a terrific issue. The story is so engaging that it wasn’t until this point…

… that I remembered last issue’s cliffhanger, when Clark was reunited with his supposedly-in-space wife. However their chat went, it was apparently OK, because here’s Clark back at the office and finally ready to talk to someone about his absent spouse.

The rest of the issue is such a cracking read that I don’t mind the glacial progression of the Lois plot; while what happened with Lois, son Jon and father-in-law Jor-El is the biggest question hanging over the series, the sudden splash of reassurance let me get on with reading the rest of the issue. And we do see Lois on the final page, as someone else finds her in Chicago…

We don’t get any new information about who Goode is working for – last month we learned she and associate Mr Strong were employees of a woman raised in Metropolis – but we do get a hint that Goode has powerful friends.

Any guesses? Mistress or… niece? Perhaps she’s a new version of Lex Luthor’s Seventies niece, Nastalthia, who was also tasked with sniffing around to learn super-secrets.

Artist Yanick Paquette and colourist Nathan Fairbairn make green K look deadlier than it has in decades, just look at the long shadows and intense colour as Goode is handed the box containing the tiniest piece. The pair do fantastic work throughout, as Paquette echoes the style of regular Superman artist Ivan Reis, adding clever touches such as the swirly panel borders when Clark is suffering his green K-attack. And the simplification in the figurework – do I detect a touch of  David Mazzuchelli? – and change in colour palette when the issue temporarily turns into a Batman story shows Paquette and Fairbairn really are at the top of their game.

Speaking of which, Goode really should be making a link between Clark and Superman at this point… then again, we’ve already seen she doesn’t have the killer instincts of a natural born Planet reporter. And even if she had, well, Clark now knows she’s up to something.

As ever, Bendis peppers his story with nuggets of dialogue that may be cute Easter eggs…

…or clever clues to character…

… but either way, are always entertaining.

Three covers again this month – the main image, by artist Patrick Gleason and colourist Brad Anderson, is so beautifully classic that when I saw it on Comixology I assumed this issue was a Triangle-era story just added to the site. The David Mack variant is good, but my least favourite of his recent run – the skin tones are too starkly contrasted, and the eyes look a tiny bit off. Francis Manapul’s World’s Finest image is my preferred cover this time, it’s so very clean, dynamic… heroic.

This is my favourite issue of Action Comics since Bendis arrived. I hope the quality keeps up… and why shouldn’t it?