The Suicide Squad are off in Atlantis, dealing with events that worry the US government. Unfortunately, crises don’t always come in ones, and back at Belle Reve, a prisoner named Cadence Laramie wakes in the medical facility. She shared a cell, but not in the conventional sense.

She escapes, leaving a pile of bodies in her wake. Task Force X director Amanda Waller assembles a new Suicide Squad – all fitted with bombs in their head that she can explode if they upset her – and orders them to bring the escapee in.

In the swamp that surrounds the super-villain jail, Cadence, her sanity returning now Dennis is dead, finds a protector.

The Task Force X B team, though, aren’t shy of tackling a ‘folk legend’.

I enjoy the current Suicide Squad series, but the fact that it’s so closely based on the film version means there’s not the fun turnaround of characters we got in the original Yale/Ostrander/McDonnell run. Issue after issue it’s Harley Quinn, Deadshot, Boomerang, Killer Croc, Enchantress, bloody Katana… there’s the odd extra character thrown in, but storylines have very little jeopardy; even when characters seem to die, they come back.

Here, though, guest writer Cullen Bunn gets to deal with a bunch of truly low-status characters, any one of whom might not survive the mission. Steel bad guy Skorpio. Infinity Inc obscurities Tao Jones and Baby Boom. Scream Queen from the Scare Tactics rock band. Green Arrow foe Merlyn. Fearsome Fiver Shimmer. And Secret Six scumbag Ragdoll. The last three are the best known, but there’s definitely scope for some juicy deaths to move the story forward. Plus, guest star Swamp Thing has never been shy of meting out his own brand of plant-based justice.

Watching the new team out in the field is a delight, as they’re not the slightly shambolic, but ultimately effective, gang we usually see. And some of these characters haven’t been seen for years – I’m thrilled by Baby Boomer’s appearance, for one, because she’s such a great visual. 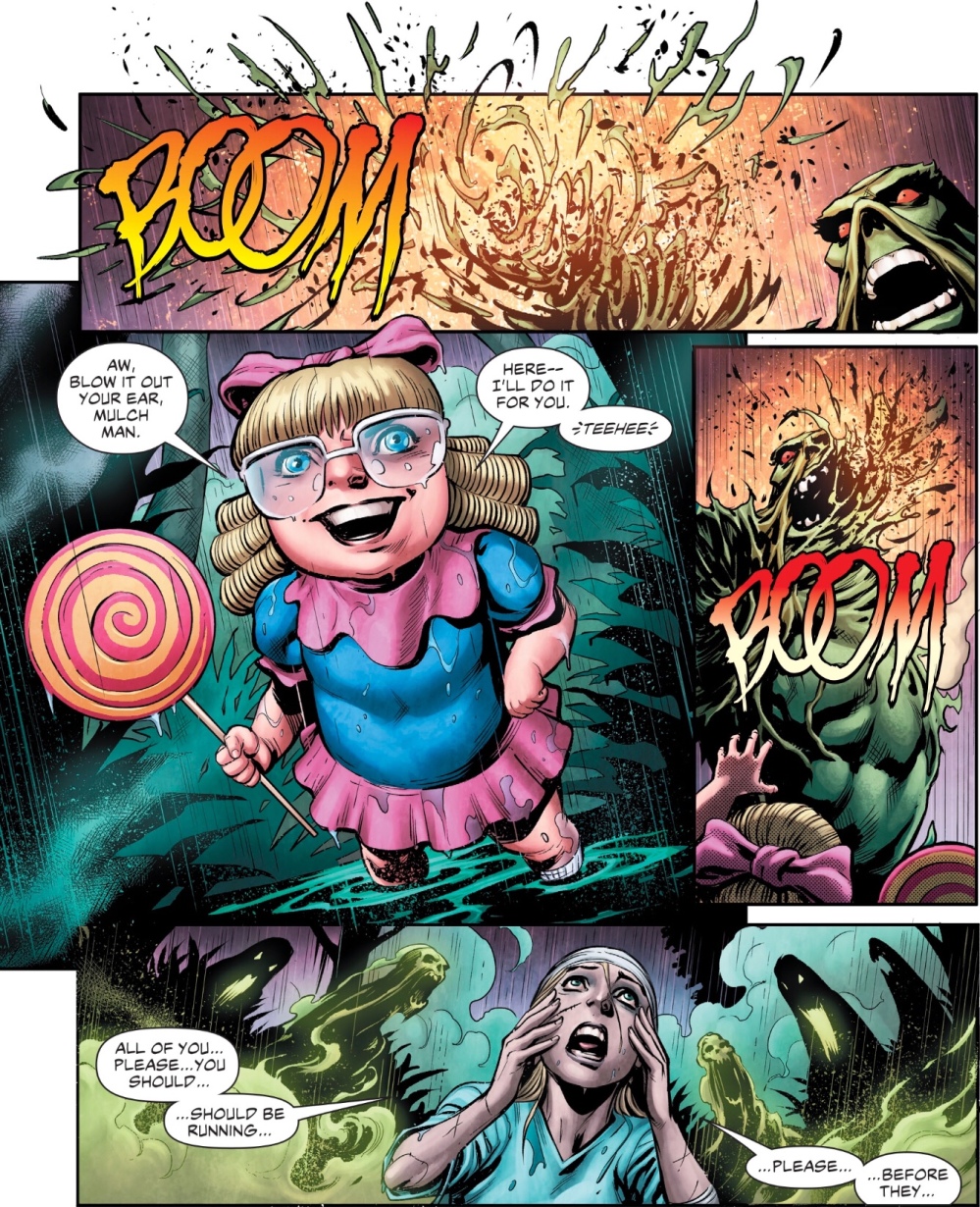 And I always love a vampire, though I wasn’t aware Scream Queen was a bad gal. Then again, if Amanda Waller wants your skill set, she’s not above arranging some trumped-up charges.

Despite the presence of tragic, creepy Cadence, Alec Holland’s mouldy mass and seven guests of Belle Reve, it’s Waller who is the biggest monster this issue, blowing up one of the villains when they return from the mission. Yes, they disobeyed orders, but they were out there in a life-threatening situation, emotions running high, while Waller sat safe in her office, haranguing and judging.

I’ve said it previously, but it bears repeating. DC have ruined Amanda Waller. The nuanced character created in the Eighties has become a one-note ball of bile, worse than many of the convicts she pressgangs into enforcing her wishes. It’s time this Wall was pulled down.

The other off-notes also concerns Waller. Firstly, for no reason I can see, at the team briefing she withholds information about the nature of Cadence, knowledge that might have kept people alive. And at the end, she abuses Swamp Thing – basically a god – and gets away with it. No. way.

Remove pretty much all the Waller stuff and this is a terrific issue, with a pacy, fun script by Bunn which answers enough questions to work while leaving the odd dangling plot thread for others to pick up. The art by illustrator Ronan Cliquet and colourist Jason Wright is terrific, full of eye-catching images involving arresting expressions and interesting angles. It’s always clear what’s happening, but the art is never workmanlike. And the colours are ever appropriate – Wright does a nice lime in murk. There’s good work, too, from letterer Pat Brosseau.

The cover image by Paul Pelletier, Mick Gray and Hi-Fi is a decent visual, but the gaudy, wordy text stops the entire image being immediately understood.

I’d recommend this well-crafted issue to fans of old school annuals in that it gives us a different cast, a splendid guest star and an engaging story. If you’re hanging onto the idea that Amanda Waller is a good person who has to make tough decisions, though, forget it.