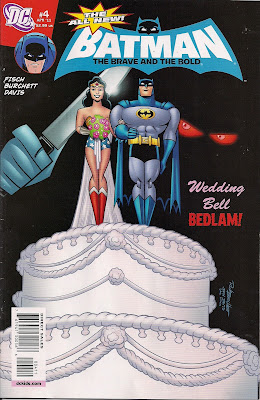 As a longtime Wonder Woman fan I should probably defend her against the accusation that she has a lousy Rogues’ Gallery.
Sorry, no can do. Mouse Man, Firework Man, Amoeba Man, Paper Man, Egg Fu, Blue Snowman, Crimson Centipede … she’s certainly gone up against some no-hopers in her time. And while most of these guys haven’t been seen for years – decades even – here they are in this all-ages team-up between Wonder Woman and Batman.
And it’s a joy from beginning to end. The beginning sees Diana defeat Giganta, and Batman take Mouse Man by the tail. The end has Mouse Man in even bigger trouble at the hands of a natural nemesis. And in between we have a cadre of cads attack the wedding of the year, as Caped Crusader and Amazing Amazon bid to tie the knot.
Yes, after years of fighting side by side, they realise that they’re meant for one another.
Well, not quite – they’re shot with love arrows by the god Eros, who’s mighty peeved that Diana has been fighting crime rather than embodying love. News of the engagement brings down the wrath of another old romantic, Talia al-Ghul, who considers herself Batman’s best beloved. So the cry goes out … ‘Find them  all! The most wanted and the long-forgotten! The major threats and the minor nuisances! This is their chance! Together they can destroy the heroes once and for all!’
And it’s not just Diana’s lesser lights who answer the call, major threats such as Dr Psycho and Cheetah also show up, along with a bevy of Batman baddies, from the Joker and Penguin right down to the less-impressive likes of Eraser, Zebra Man and Kite Man.
The wedding scene is huge fun, as the power couple’s friends and families lend a hand against the uninvited guests, before a series of surprises brings the story to an end. There’s plenty to enjoy on every page courtesy of writer Sholly Fisch and artists Rick Burchett and Dan Davis, so many good things that it’s hard to choose a favourite moment. A cameo by DC’s baby stars Sugar & Spike nearly took the crown, but in the end it has to be this vision ‘enjoyed’ by Talia (click to enlarge). 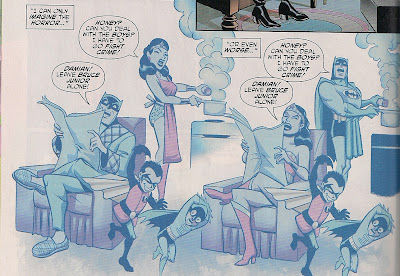 I love the equal opportunities silliness of this illo – back when I started reading comics this would have been Diana chained to the cooker as chauvinist Steve Trevor smoked a pipe. I prefer the update.
Oh the heck with it, may I show you one more moment? A scene typical of the big-hearted action of this book? Fisch and Burchett really do love their DC history – who ever thought we’d see Queen Hippolyte in that Silver Age ice cream cone crown again? And this ‘chaaaarge’ reminds me of all the best comic book weddings. 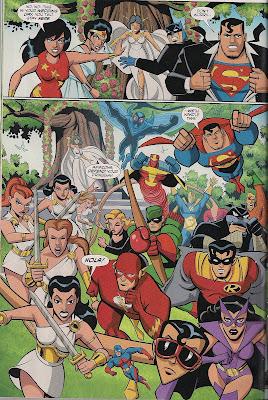 11 thoughts on “All-New Batman: The Brave and the Bold #4 review”