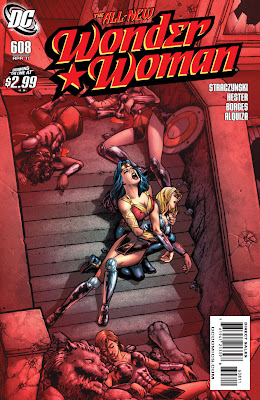 It’s looking bad for Diana as the Odyssey storyline resumes. The Amazons in their townhouse temple have been slaughtered, and the killers have her in their sights. After seeing off her remaining sisters, Artemis, Cheetah and Giganta pile on the Amazon princess.

Mid-battle, the Oracles from the early part of J Michael Straczynski’s arc appear out of the ether, encouraging Diana to fight on with news of hidden allies. But the outnumbered Wonder Woman falls before the power and rage of the three Amazons – corrupted by war goddess The Morrigan – and looks set to join her sisters on the Elysian fields …

… until one of those aforementioned unseen aides appears, and sees off Artemis and co with the one thing that can beat their physical force – a powerful mind. It’s Dr Psycho, the cloaked figure who’s been dropping Wonder Woman dolls around the city for the last few issues. But is he here to save Diana, or kill her himself?

Elsewhere this issue, Bellona, one aspect of The Morrigan, torments long-lived legend Ajax in a spot of sparring, before she and her sister are reminded – in a spectacularly spooky scene – that they are servants too. And their unnamed mistress (‘She of the flashing blade, the unquenchable thirst’) wants Diana dead, not subsumed into the Morrigan.

Despite losing this round, there are some good moments for Diana here, with the best of them – stopping a bus hurled by Giganta – motivated by concern for bystanders. Her narration emphasises the importance of hope, and resisting rising hate within her. Happily, Diana doesn’t give into rage here, even when she’s reacting to the deaths of her companions.

Ah yes, the deaths. It’s gotten beyond the point at which I’m saddened as Amazons fall. The cover’s full of dead Amazons, inside they’re so darn dead that there aren’t any remains and by page three Diana’s chatting away as her remaining sisters are seen off by the arrows of Artemis. While I like what gobbets of personality we’ve seen in the new girls, their sudden passing sends out the message that this is a throwaway period, and they’ll either be revived when the book settles into its next phase, or never mentioned again, with regular continuity Amazons returning to the forefront.

Phil Hester’s script is smart and entertaining. Diana’s pluck as she faces tough odds would likely inspire her sisters, were they not all deceased; still, she impresses her foes with her skill and bravado. The Morrigan veer firmly towards camp, making me think they’re going to be shuffled offstage as the Burning Man before them was, in favour of The Real Threat (herald of The True Real Threat). Just so long as we keep moving forward, towards the end of this storyline – while Hester has turned it around in terms of enjoyment, this is Part 8 and I’m ready for it to end.

Wonders never cease, this issue has a single penciller, the very talented Geraldo Borges, inked by Marlo Alquiza and coloured by Alex Sinclair. His Diana is a cracker, pretty and powerful, convincingly placed in the fight scenes. He conjures up the urban environment well, and renders the secondary characters with aplomb. The moment in which the Morrigan receive their warning is a model of icky surprise. And Dr Psycho is a pop-eyed creepy joy.

I mentioned the cover, by Sinclair and occasional artist Don Kramer, in passing. I’m not a fan of the concept – Diana wailing over kaput Amazons, the scene swathed in blood red, topped by a red logo. And Diana’s proportions seem a little off.

Still, that was the worst thing about this issue, which passed a lunchtime in fine fashion. Dead Amazons and all.