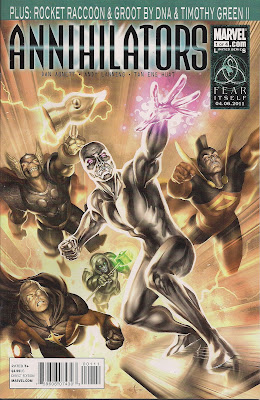 I hate this title.
Seriously. I can’t spell it, I keep having to cut and paste the thing into the text. Also, like The Invaders, it doesn’t sound very superheroic.
It’s a good read, though. Dan Abnett & Andy Lanning continue to guide us through Marvel’s Cosmic Corner following the cancellations of Nova and the Guardians of the Galaxy. In-story, Nova and Star-Lord have sacrificed themselves to fend off the Cancerverse, and the Guardians have disbanded. Cosmo the astro-dog remains at their old HQ, Knowhere Station, joined by successor team the Annihilators – Silver Surfer, Ronan the Accuser, Beta-Ray Bill, Gladiator and Quasar.
Yup, that’s a blooming powerful bunch, as new recruit Ikon the Spaceknight tells them, as she whups their cosmic asses one by one. The problem, suggests the haughty minx, is that while they’re more powerful than she is – Alpha Plus class as opposed to ‘mere’ Alpha – they’re afraid to cut loose in confined quarters.
Which is probably true, but hasn’t the team been formed – at the suggestion of Star-Lord – to fight huge great threats Out There? I’m sure, were huge great threats, as opposed to snarky, superior Spaceknights, to appear at Knowhere Station, our heroes would blast away merrily.
Nevertheless, the boys seem convinced by Ikon’s argument. They’re on the verge of disbanding – as fresh members go, Ikon’s not exactly a born cheerleader – when the threat of the ‘sorceress’ (sic) Dire Wraiths rears its ugly head, heralded by evil space wizard Dr Dredd.
This is very much a scene-setter of a story, but it’s an engaging one. The players are nicely sketched, with Ronan especially benefitting from Abnett & Lanning’s light tough. Quasar is our point of view character, and a very annoying one he is too, oozing self-doubt despite years of experience with his powers. So he got himself killed, who hasn’t? And he has a deadly way with words, describing the Annihilators as ‘the next generation of cosmic first responders’. Snappy.
I’m not hugely interested in any of the team members, though as a Rom: Spaceknight fan of old I’m inclined to come back next month to see what the Dire Wraiths look like these days – white blobs or rare steak? Rom’s mentioned in passing here, but not by name; I suspect licensing issues are in play, sending Rom to the realm of the Nameless ones, such as … sssssh … Dr Fu Manchu.
The artwork looks pretty good, but it doesn’t seem like the work of penciller Tan Eng Huat. Granted, I only ever saw his Doom Patrol art, and that must have been a decade ago, but his illustrations look very different under inker Victor Olazaba – more generic.
What will definitely bring me back next month is the book’s second strip, a repurposed mini-series starring former Guardians of the Galaxy Rocket Raccoon and Groot, the tree that talks like a (not very chatty) man. Written by Abnett & Lanning and drawn by Timothy Green II, the strip opens with Rocky having stepped away from a life of adventure. He’s working in the mailroom of useless space corporation Timely Inc, and putting up with everyone pointing out how adorably cute he is.

Until an evil clown comes calling. An evil wooden clown that can only be beaten by the power of the Stapler Cosmic. OK, so it’s not really called that, but Rocky nevertheless does a fine job of protecting himself and his colleagues with only woodland creature grit and cheap stationery. 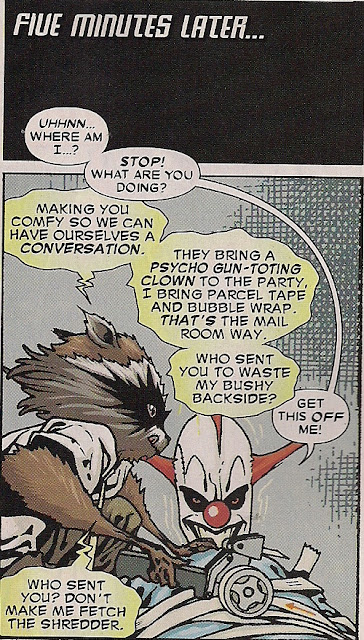 Rocky’s pluck doesn’t stop him getting a telling off from the boss, mind, so he quits, black affronted by the revelation that he was only employed in the first place to meet a ‘cute sentient animals quota’.
Besides, he has to find the one person who can help him learn just who would send a wooden clown against him – Groot. But when Rocky arrives on Groot’s homeworld, expecting that finding his friend will be a breeze, he’s in for a surprise that leads to a shocking final page.
The story is a delight from start to finish, thanks to the personality of Rocket Raccoon, a less grouchy Howard the Duck. He’s making the best of a bad situation, and while he’s trying to avoid heroics – six months on from the Cancerverse business, he’s still mourning his lost friends – he’s quick to rise to the occasion.
Green finds a terrific balance between weird aliens and recognisable office drones, and there’s a splendid animated quality to his line which serves the story well. A word of praise, too, to colourist Nathan Fairbairn for a palette far removed from that of your average space opera.
Alex Garner provides the electric cover. There’s a Rocket Raccoon and Groot variant, presumably intended for their ‘solo’ book. If ever there was a case for a double cover, it’s this – what a shame Marvel never opted for it.