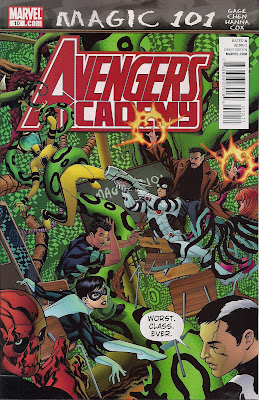 I’ve been wanting to see more lessons at Avengers Academy, and that’s what we get this month, with classes in Rudiments of Magic, Applied Chemistry, Extraterrestrial Culture, Anger Management and Superhuman Ethics. The guest teachers are Dr Strange and The Protector, though they’re only around for a panel or two. The real learning comes courtesy of Giant Man, who finds a way to give Hazmat a break from life inside a radiation-proof suit, and Speedball, who shows that you can begin to move on from the most awful events imaginable.
Veil also takes some of the spotlight, as she bids to make amends for recent poor behaviour, though just as she’s learned one life lesson, she looks set to make a very big mistake in another area entirely.
The big moment, though, comes as Speedball and Justice take the students on a field trip to Stamford, scene of the New Warriors’ greatest shame – the deaths of 600 townsfolk at the hands of evil nutter Nitro, partly due to the heroes bringing their tacky reality TV show there. An attack by some bargain basement villains gives the party a chance to loose some frustrations, with Speedball, in particular, showing just what he can do. The impressive showing leads to an explanation for the apparent self-harming he was indulging in a few issues back. I’m not sure whether we’re meant to buy it.
Whatever the case, writer Christos Gage gives us another top-notch script, replete with charismatic personalities and gripping situations. And at least one very good gag centred on the question of who’s the looniest Avenger.
Sean Chen draws, and draws beautifully. The new characters retain the stylings of artistic creator Mike McKone, even as Chen brings his own facility with staging to the book. The body language and facial expressions are spot-on, with panels such as this touching reaction from Hazmat, able to go suit-free for the first time in ages. The young woman who must never forget how easily she could kill, can be a kid again. 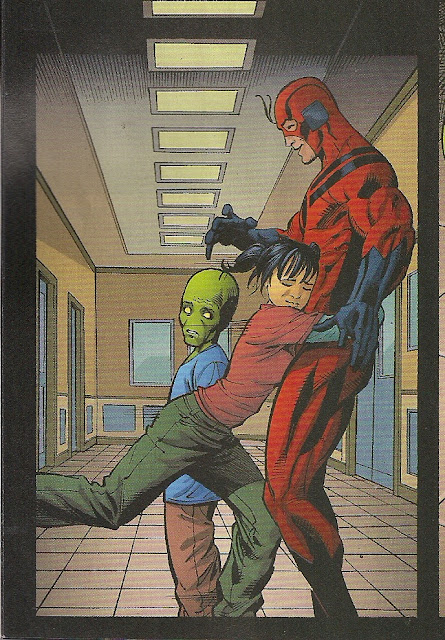 Just one thing Chen might look at – his Speedball is rather the buff fellow, when he’s usually been a gangly type.
Chen is perfectly paired with Scott Hanna, whose precision inks are just right for a book set in the shiny world of Infinite Avengers Mansion. Jeromy Cox’s colours are lovely to look at, while Joe Caramagna letters with his usual flair …
… and if he has an hour or two, perhaps he could do something about that godawful leaden logo. I realise I’ve whined about it previously, but it’s just nasty, killing almost any piece of artwork it sits on stone dead. There a great cover in here somewhere, behind the logo, the unnecessary ‘Magic 101’ banner and that tombstone of a UPC box. I like McKone’s illo, I love the witty word balloon, the colour pops … really, a tweak to the ‘Academy’ – or rather, ‘Cadamy’ – bit of the masthead and all would be well.
Minor moan over. Avengers Academy continues to be a highlight of the mainstream superhero scene. A gold star to all.