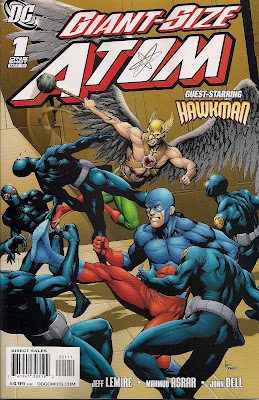 And that has to be the best use of a ‘Giant-Size’ tag since the infamous ‘Giant-Size Man-Thing’. The Atom even gets to be a giant here, well, relatively, in one of several coups de science Ray Palmer comes up with as he battles evil boffins The Colony.
Before he was so rudely interrupted, by being tossed out of Adventure Comics, the Atom had seen his father almost killed by the organisation, and been reunited with long-lost Uncle David, a rogue scientist gone rogue. Here, in a 46pp extravaganza, he enlists the aid of Hawkman to take down the baddies and rescue his kidnapped, comatose father, and also has a hand from Oracle and Dr Midnite. Along the way he undertakes a fantastic journey inside Hawkman, introduces us to his very unusual sentry and generally reminds us that as good as this Tiny Titan is with his fists, he’s even better with his brains.
The Adventure Comics shorts were fine given their brevity, but here writer Jeff Lemire proves that size does matter. With plenty of room he can showcase just what makes Ray Palmer a hero without constantly recapping the storyline. There’s also space for the relationships that Ray treasures, and those that need a spot of work. In a natty nod to Ray’s barbarian period, as Hawkman swings his mace in battle, Atom shows he’s still handy with a sword. And there’s a happy ending, something a Silver Age Atom story hasn’t had for along time.
Lemire’s Adventure partner Mahmud Asrar is on hand for much of the book, sharing the pencilling workload with Allan Goldman and Robson Rocha. The latter two’s newness to the assignment likely explains one or two rough spots – poor Ray becomes rather jug-lugged at one point – but they don’t do too badly. John Dell leads a pack of inkers – Andy Owens, Eber Ferreira and JP Mayer – but Pete Pantazis, God love him, manages to colour the whole book and keep things looking consistent on at least one level.
I don’t know if letterer Sal Cipriano is responsible for the new spin on the classic Atom logo adorning the cover, but it really is spiffy. (And if, like me, you love reading about how logos change down the years, legendary designer Todd Klein has a whole batch of such studies at his blog, including a three-part Atom focus, beginning here). As for the excellent cover illo itself, that’s the work of Gary Frank and Nathan Eyring.
I’m still miffed that all-new Atom Ryan Choi was brutally murdered, apparently to make way for the return of Ray, but judging this book on its own merits, it’s pretty good. Not an outstanding superhero tale, but a more than decent diversion, one leaving the Atom in a far better place than when it began.