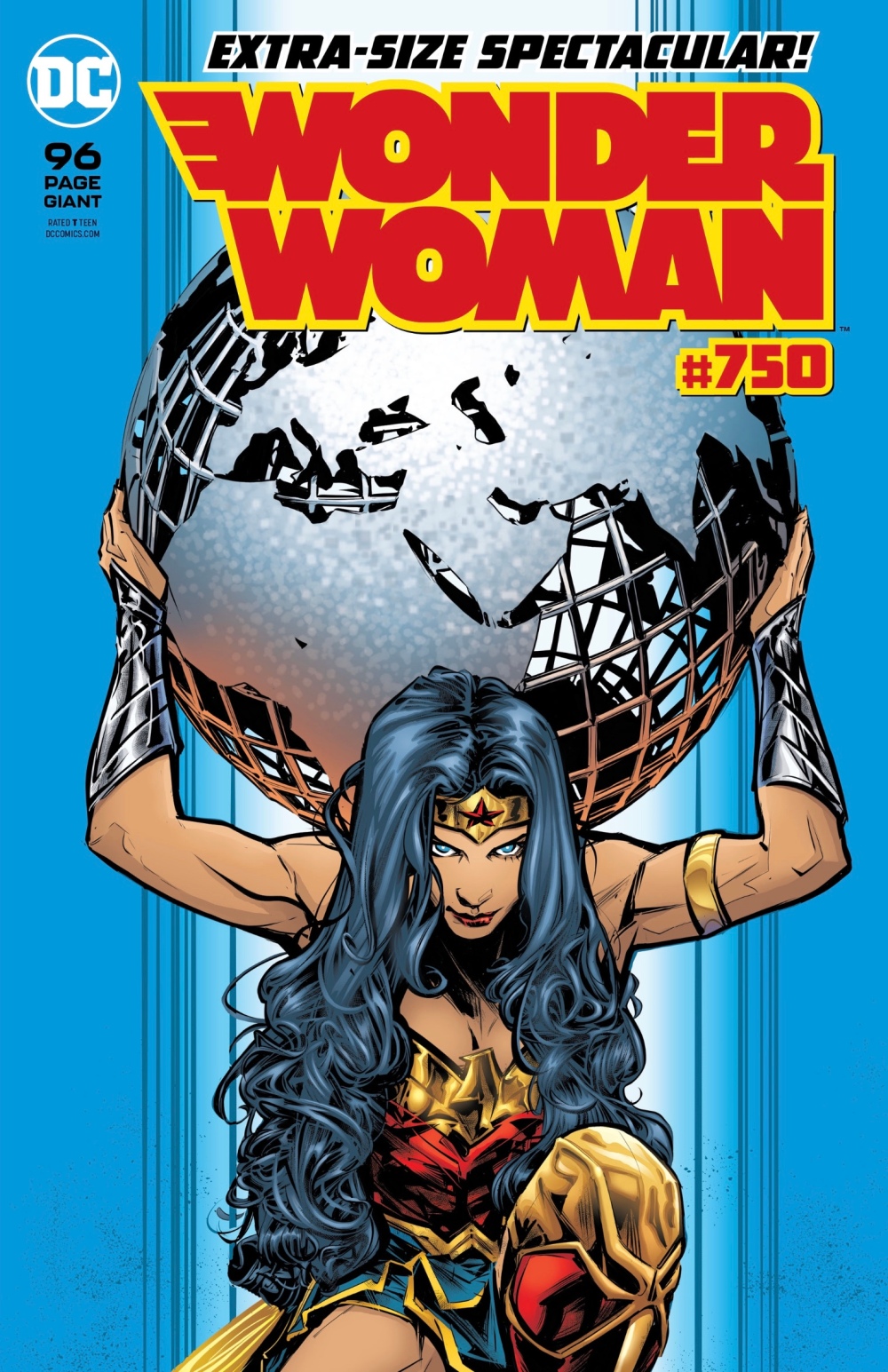 It’s Wonder Woman #750! Hang on, you never saw #749? That’s because there wasn’t one, this is the Amazing Amazon’s series returning to its ‘legacy’ numbering… add the various runs together and, apparently, this is the figure we hit. The same thing happened with #600, then another #1 came along, and it’ll likely happen again – would anyone bet on this series not being rebooted again before #800?

Hey ho, modern comics. What we have here is another ‘celebration’ of Wonder Woman, and if you think the character debuted in 2011, that’s what we get. Because this is post-New 52 all the way, with a nod towards what’s coming with the next DC continuity reboot.

The issue begins with the conclusion of current series writer Steve Orlando’s first storyline, one I jumped off after a couple of issues. There’s Diana and Silencer watching Cheetah fight Hera. There’s a scene inside the magic lasso dimension, something which was novel when Gail Simone did it but has become a bit of a cliche. There’s Diana so desperate to believe the murderous, mad Cheetah can change that she doesn’t jump into the fray and restrain her. 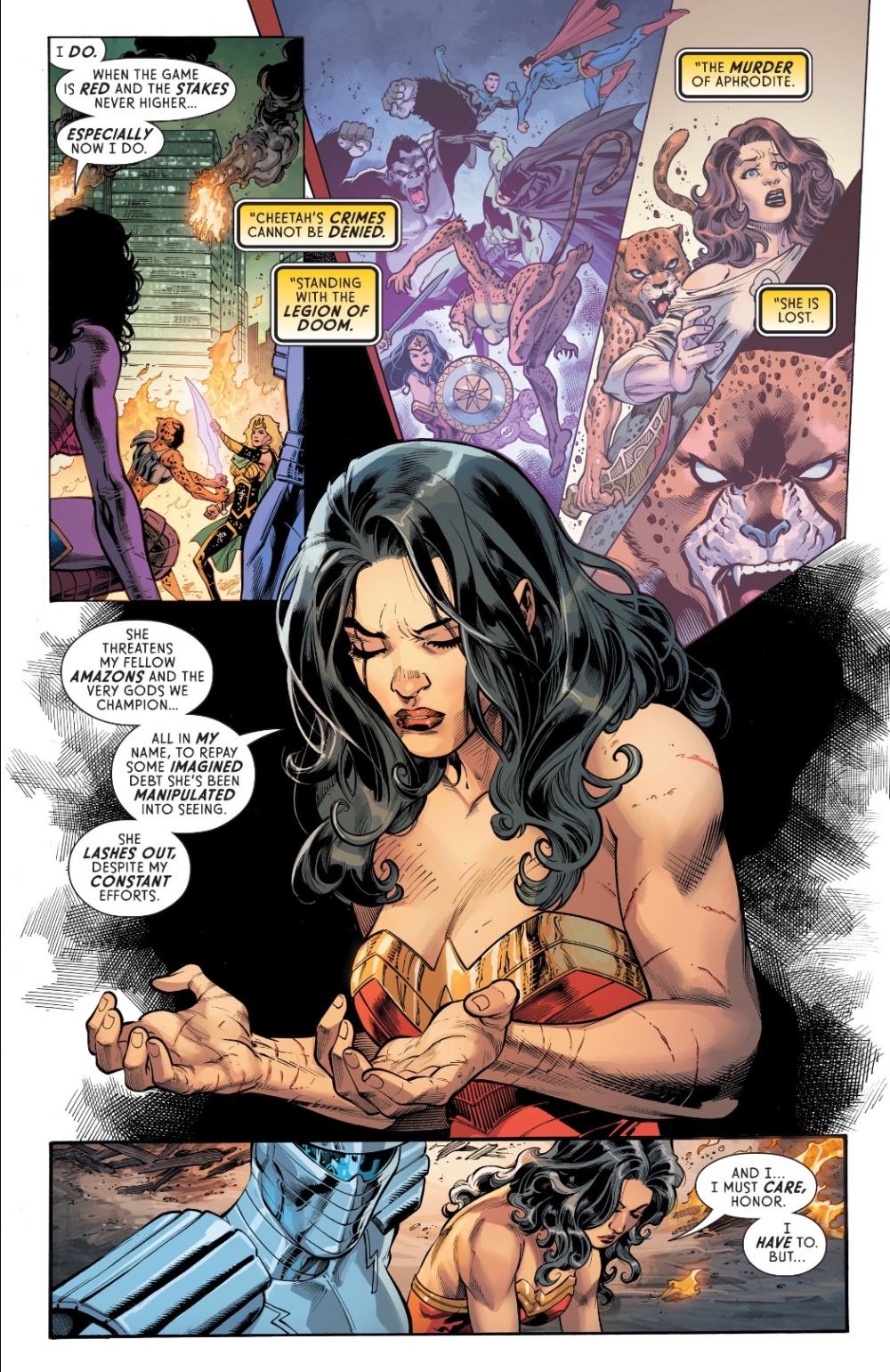 There’s Diana putting Cheetah – looking ridiculous in the tiara – in the position of submitting, or having her throat cut. We see Wonder Woman choosing a new sword and shield from the Themyscira armoury and redefining her mission so subtly that I’ve no idea how it differs from the old one. She’s now hunting for Truth, I think that most recently it’s been Love. I’m not convinced a superhero can get by with a one-word mission statement, Superman and Supergirl have it about right.

Oh, and when Diana is forced to let Cheetah run off to save Dark Nights Metal leftover character Silencer, she doesn’t afterwards immediately hunt for Cheetah. Nope, she has a chat with the assassin-for-hire and fails to take her in, apparently because she’s a mom.

If you’re not a regular reader, and don’t know the characters and relationships, forget it, DC boss Dan DiDio doesn’t like recap pages and even when writers such as Orlando try to give us enough to get up to date, the sheer length of storylines these days mean it’s never enough.

I like Orlando’s approach to Diana less than I expected I would when he was announced as writer, she’s too passive for my taste, and humourless. And she’s referred to as the horribly high-falutin’ Truthqueen. Plus, he continues the Greg Rucka approach to Cheetah which says that because she was Diana’s friend as Bar-Bar-Bar-Bar-Barbara Ann Minerva, she must be given so much rope that she can hang everyone in sight.

Maybe this latest arc will read well in trade – it certainly looks good thanks to artists Jesus Merino, Vicente Cifuentes and Romulo Fajardo Jr – but as a chapter in a special likely to attract curious readers, it’s not the best.

The second story is better as an entry point, as Gail Simone and Colleen Doran bring back their character Star Blossom, a kid superhero with plant powers (yes, she sounds like a My Little Pony and, funnily enough, her forename is Peony). 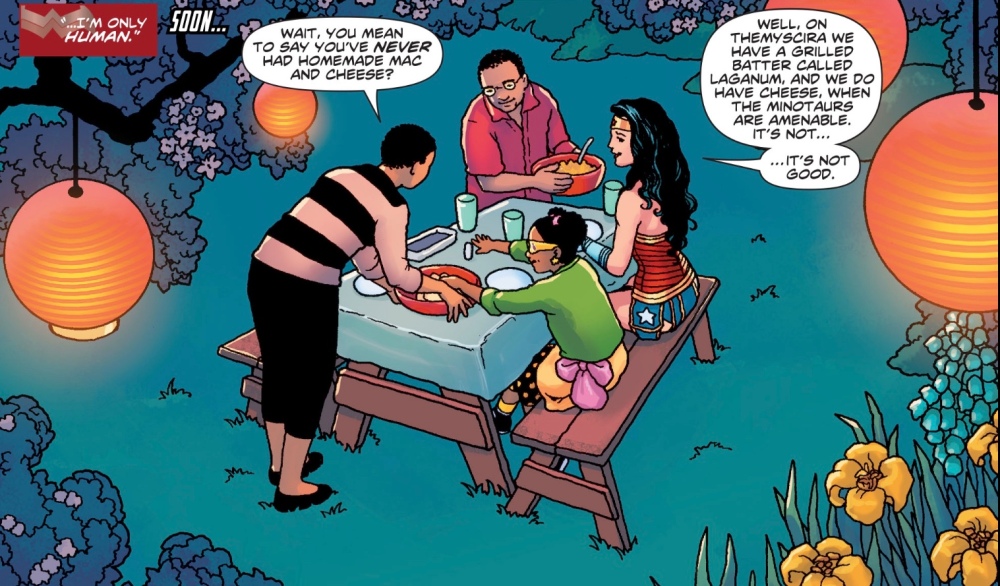 There’s warmth and humanity to spare as good food is eaten, friendships are forged and someone gets to impart wisdom to Diana, for a change. From Small Things, Mama (a Bruce Springsteen reference, apparently) is a lovely looking, sharply written gem.

The Interrogation has Diana accused of being a glory hound before the truth is revealed. I like this short by writer Mariko Tamaki and artist Elena Casagrande because it remind us that Diana doesn’t have to be a sap. 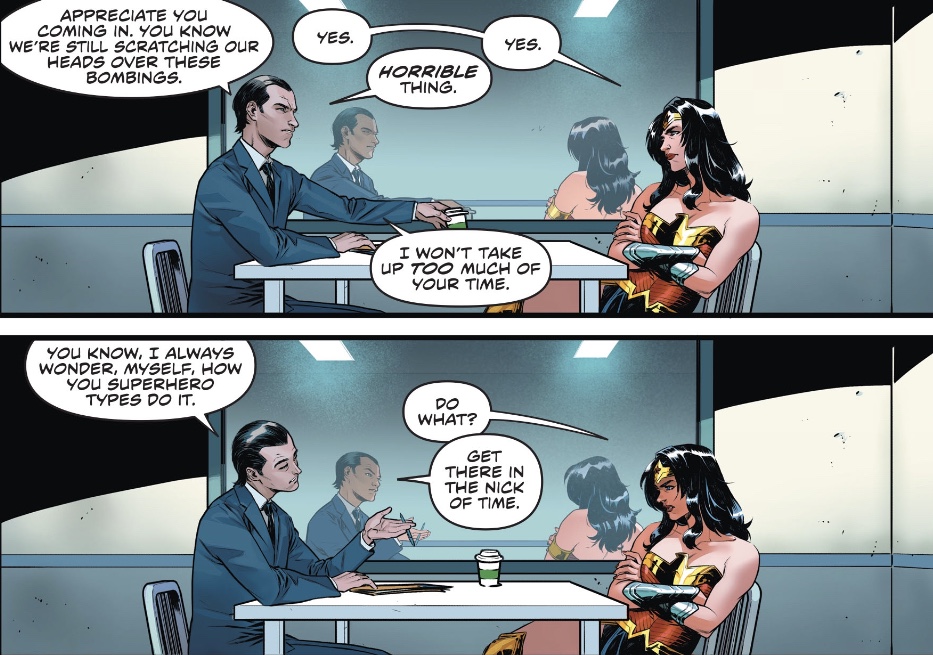 Diana is a sap again in the next story, as Cheetah reappears. It’s an accidental sequel to Orlando’s tale by former Wonder Woman creative team Greg Rucka and Nicola Scott. It begins with our heroine meeting another of her greatest enemies, Circe, in New Orleans. It turns out Diana is willing to gift her magic lasso – sorry, Golden Perfect, which sounds like a variety of apple – to the evil witch if said evil witch will have a go at ‘curing’ Cheetah of the werecat status she fought desperately to gain. Wonder Woman is big on caring and forgiveness, I get it. But this is the Cheetah. 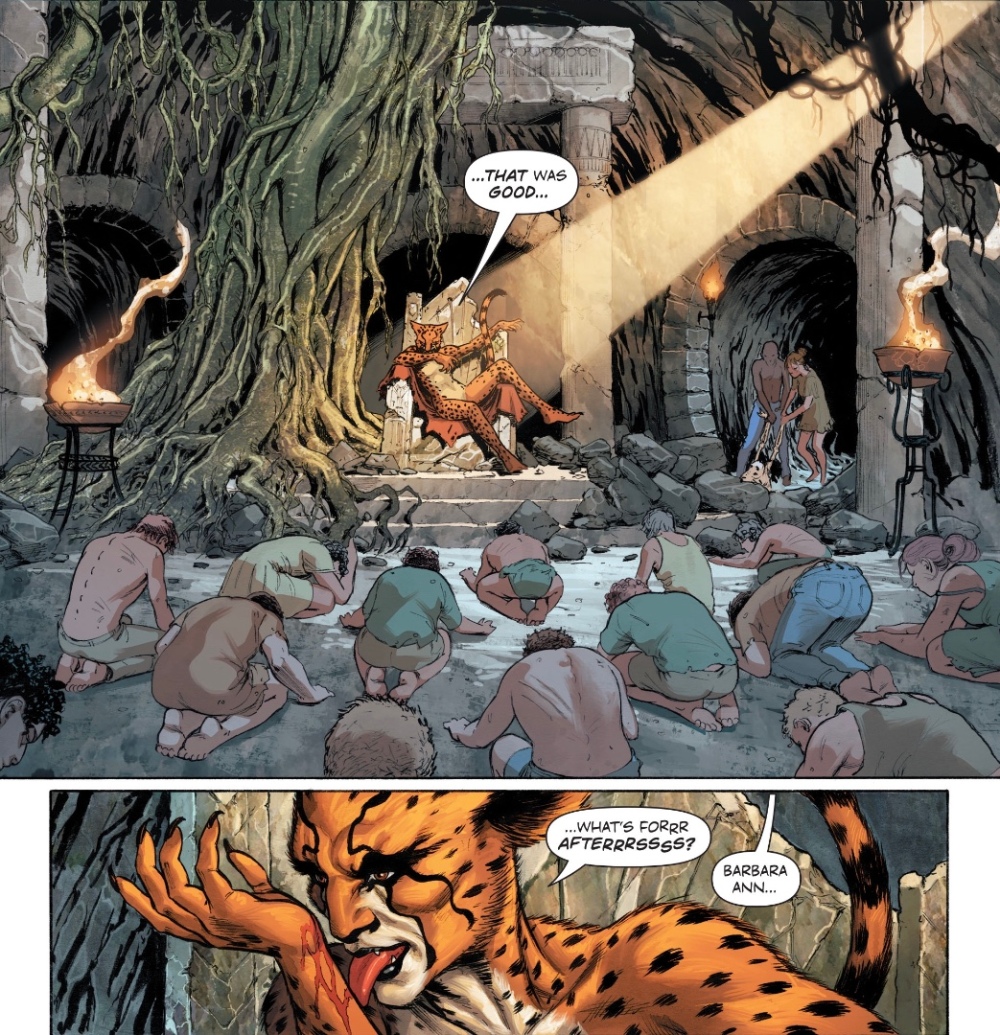 At some point you have to accept someone can’t be helped and simply cage the beast, put your efforts where they can do some good rather than continually give a killer another chance, and so become culpable in more deaths. Making bargains with a witch who craves power isn’t the way to go about doing good… especially when said sorceress admits Diana’s friend Zatanna, a decent human being, is actually more powerful.

On the one hand, I quite like the idea that two immortals won’t always have the same relationship, and Rucka’s banter is entertaining. On the other, recent years have seen nothing but bad blood between Diana and Circe; even if the witch is affable today, you can bet she’ll strangle someone with that lasso tomorrow.

Scott’s art, coloured by Fajardo, is terrific, even if DC’s current visual approach to Circe – somewhere between Mickey Mouse, bandleader and early Cindy Lauper – is weird.

To Leave Paradise sees young Diana counselled by her Amazon sisters as she dreams of seeing beyond Paradise Island, and the close of the story made me grin. It’s an economic, stylish treat of a tale from writer Kami Garcia, artists Phil Hester and Andre Parks and legendary Wonder Woman colourist Trish Mulvihill. Gabriela Downie is a new name to me, and I really like how she approached the lettering for Diana’s thoughts. 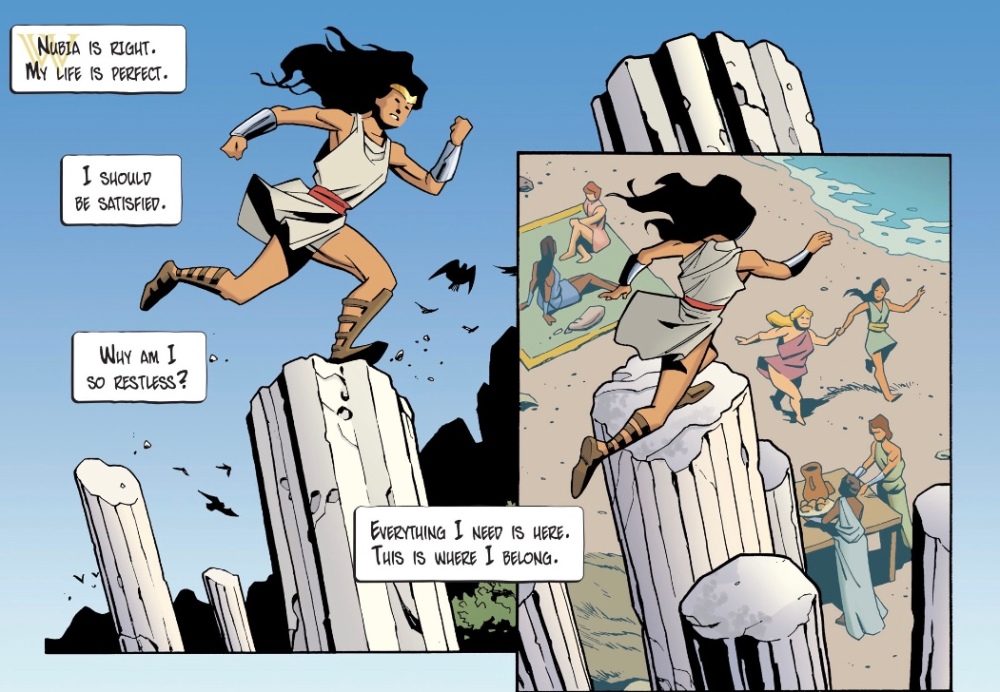 Did you ever see the five-minute pilot for a Wonder Woman telly show in the Sixties? Shannon and Dean Hale’s script for Emergency Visit reminded me of that nuttiness, and that’s a good thing. Diana is summoned back to Themyscira to battle a hydra and it turns out she’s right to wonder why she’d be called him for something that is, to the Amazons, pretty mundane. 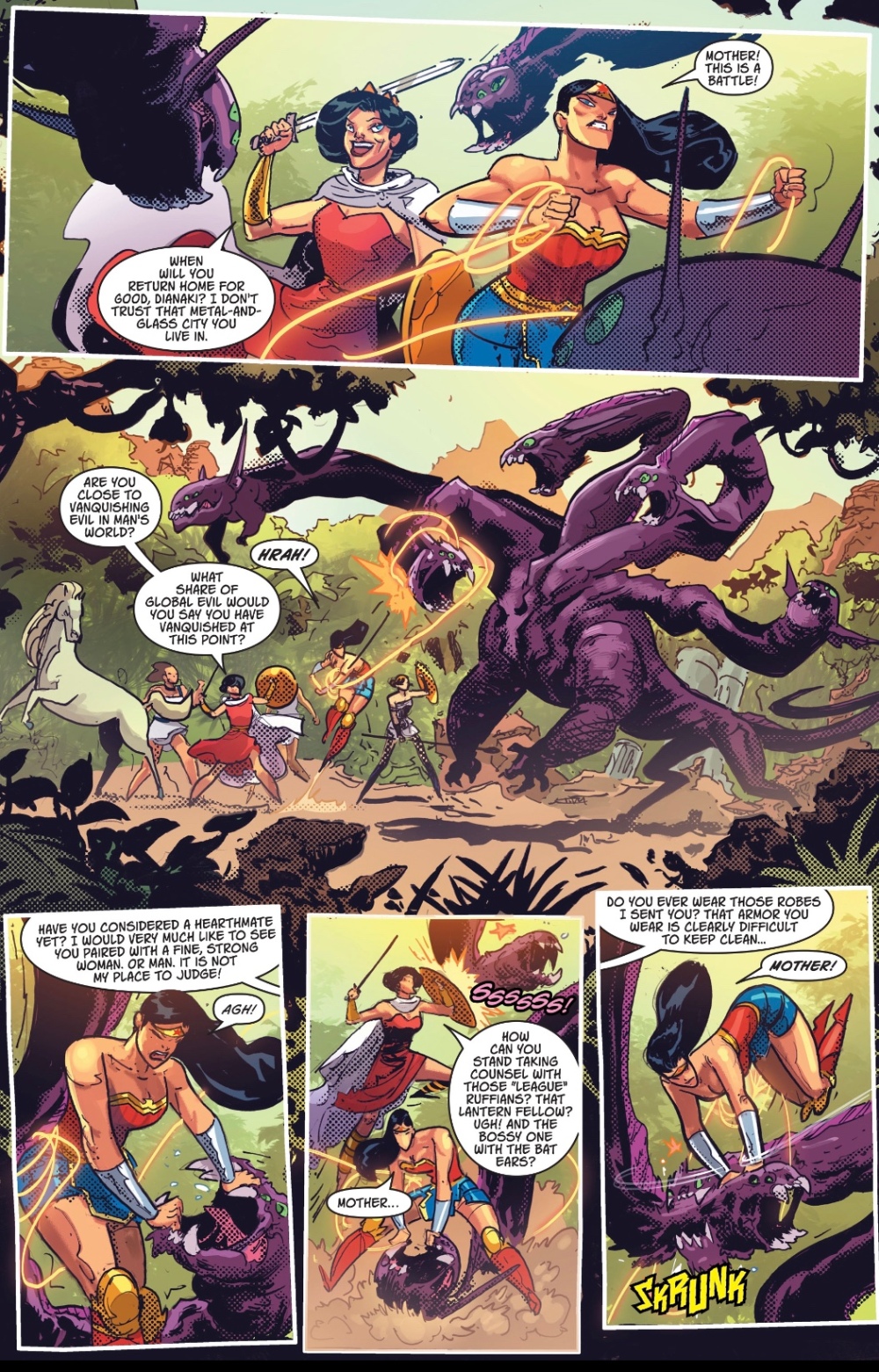 The energy of Riley Rossmo’s cartooning is terrific, but Suffering Sappho, his Diana is a headscratcher. Wonky-eyed, massive-chinned, tubular of body…she’s as monstrous the creature she’s fighting. It’s a bizarre choice, but I still enjoyed this daft tale hugely.

The DC Bombshells cast give us their thoughts on their alternate world Wonder Woman in To Me, a series of vignettes by writer Marguerite Bennett and artist Laura Braga. Bennett’s writing is lyrical but not self-consciously poetic, while Braga, colourist Fajardo and letterer Wes Abbott (extra points for dropping in the original WW logo) blend their talents to give us stunning pages. 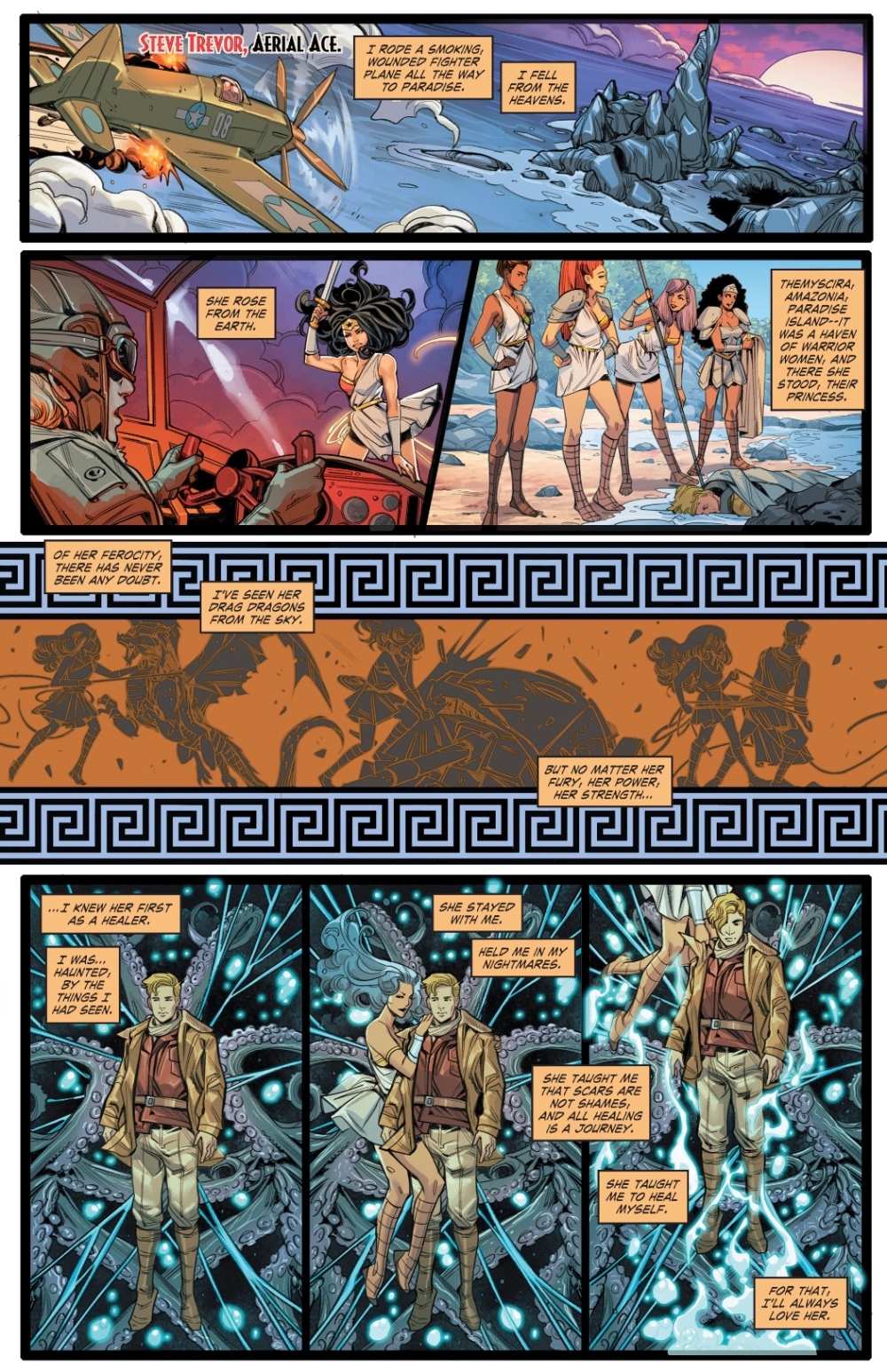 Always, by Vita Ayala and Amancay Nahuelpan, updates us on the progress of the current version of another of Diana’s friends turned enemy, Vanessa Kapatelis, the Silver Swan. Vanessa’s in jail, thinking about her bad decisions and hoping for a visit. It’s a nice spot of optimism after all that Cheetah business. 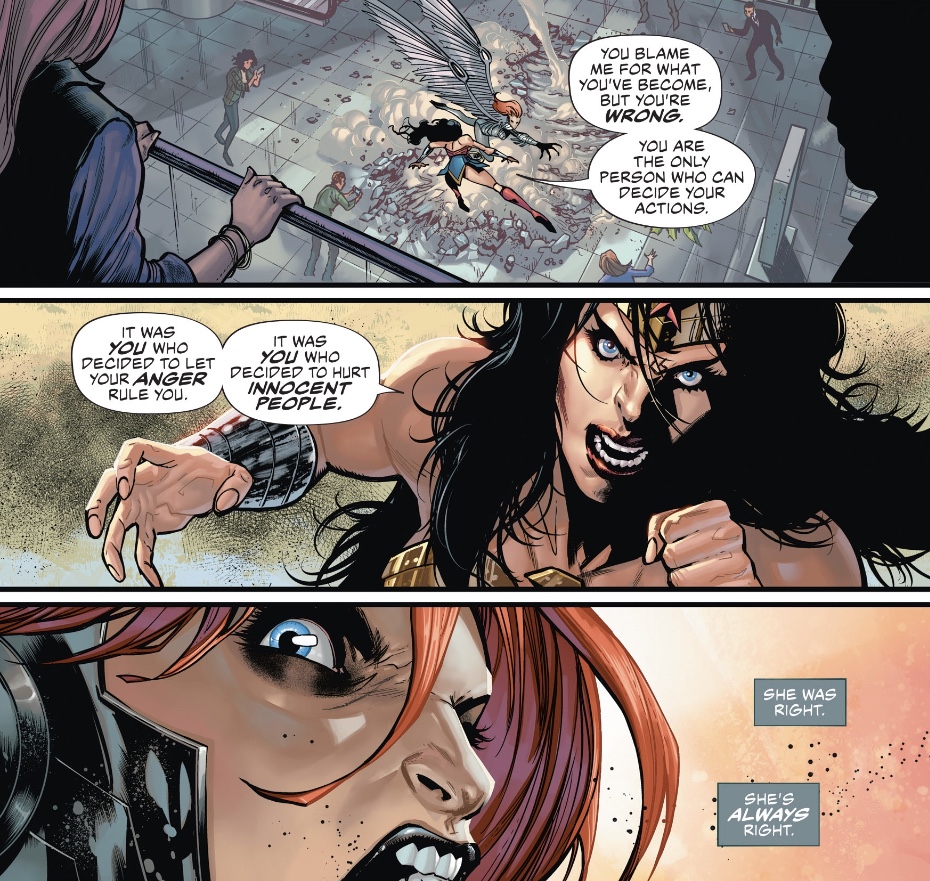 The final story, A Brave New World, has Diana appearing in 1939 New York and meeting FDR. Given that Wonder Woman’s first appearance in comics was in 1941, it’s likely this is a preview of the upcoming DC continuity chance rumoured to be making Diana the world’s first superhero. 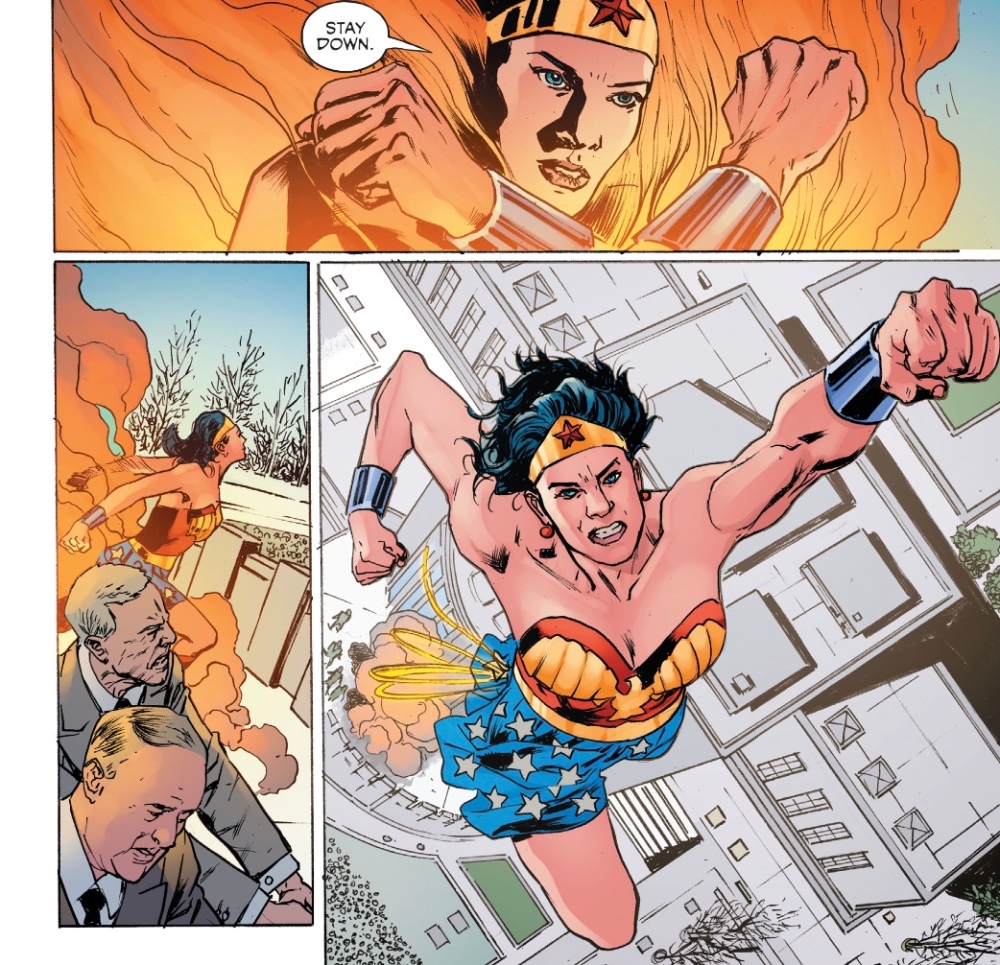 Anyway, it’s a decent Roy Thomas-style historical piece from Scott Snyder and Bryan Hitch with colourist Mike Spicer and letterer Tom Napolitano, who does a lovely job with the title display fonts. Oh, and Marie Javins is editing when the rest of the book is overseen by Brian Cunningham – Javins edited the fun Convergence event, so she’s definitely up to something. Hopefully the 5G – Fifth Generation – timeline is, like Convergence, a two-month stunt rather than an ongoing change, Diana being around long before her traditional contemporaries would be all kinds of messy.

Whatever happens, it’s wonderful to see how Hitch draws a Golden Age Diana when everyone else has to do the modern Xena knock-off.

This issue also has a few pin-ups, my favourites being the contributions by Jose Luis Garcia-Lopez and Trish Mulvihill, and Ramona Fradon, Sandra Hope and Mulvihill. Here’s the latter. 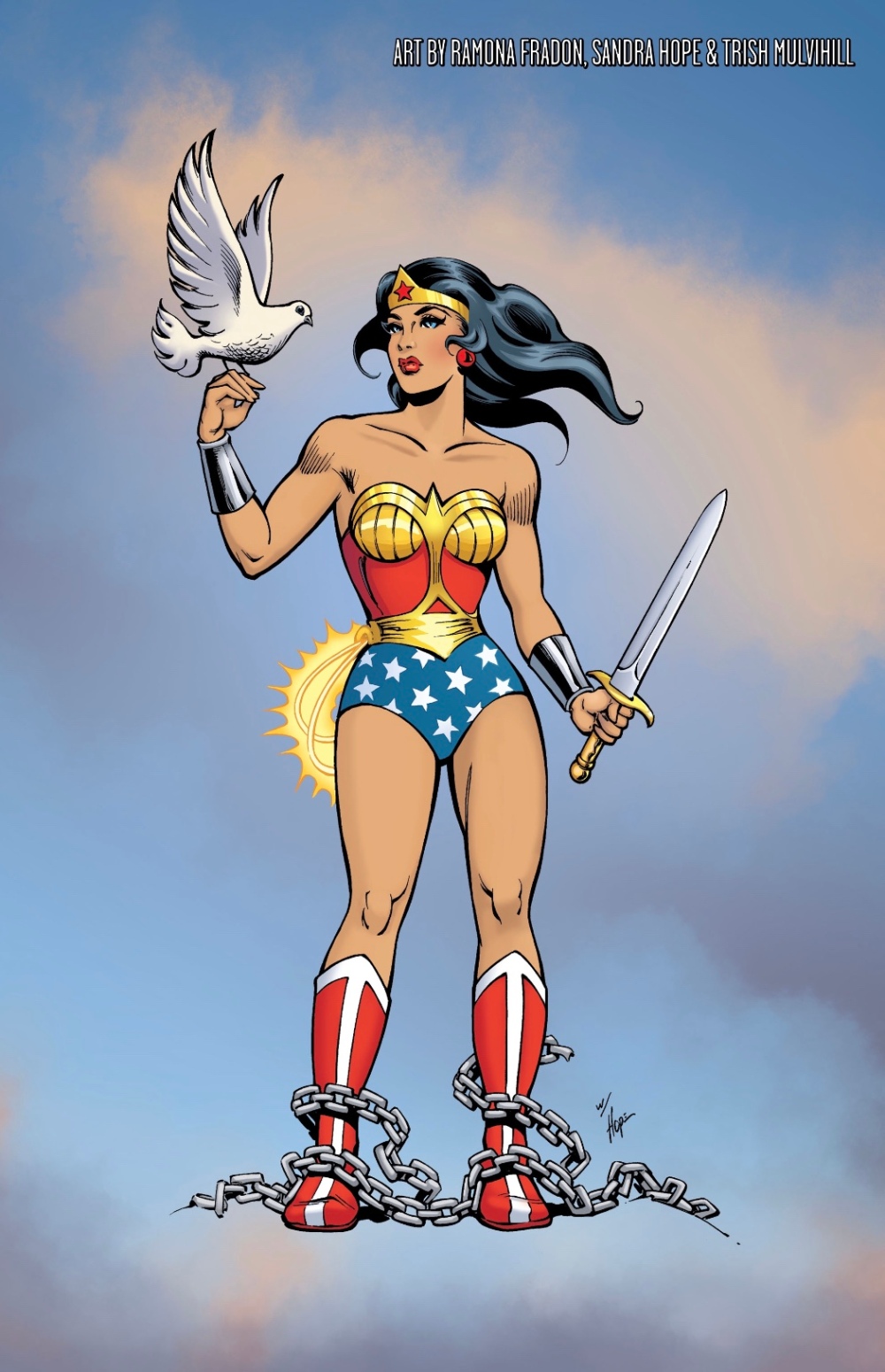 Phew, that was a big read. I enjoyed enough of it to not feel I’ve wasted my £6.99, but a fair bit of this felt like leftover inventory from the digital Wonder Woman series of a few years back (a complaint I’ve made previously). Not bad, but not especially anniversary-appropriate. Wonder Woman #750 should be a salute to Diana’s entire comics history, with throwback tales of the Golden, Silver and Bronze Ages. Groovy Di Prince should be in there, Donna Troy should be featured – thank goodness for that Fradon poster, and a nicely designed contents page, reminding us that Diana was once, proudly, a superhero from a mythological background, not a goddess of peace who acts like a war god.

And while contracts likely prevent Diana’s first artist, William G Peter, being credited on the title page with William Moulton Marston, it would’ve been nice had DC found some way to sneak him in – for example, a poster page could have been sacrificed for a text feature.

The cover by Joëlle Jones and Mulvihill is impressive, but does Diana have to be so gloomy, burdened by the troubles of the world? It’s your big day, give us a smile!